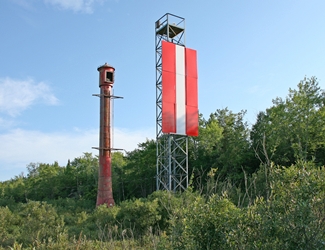 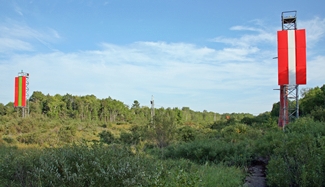 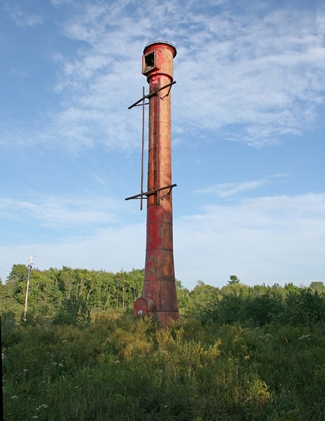 Seventy-five-mile-long St. Marys River runs between Whitefish Bay on Lake Superior to Detour Reef, on the northern end of Lake Huron. Two large islands, Neebish Island and Sugar Island, divide the river into channels, providing mariners various routes for sailing between Lake Superior and Lake Huron. Along its course, St. Marys River widens to form Munuscong Lake, just south of Neebish Island, and Lake Nicolet (also known as Hay Lake) on the west side of Sugar Island and Lake George on the east side of Sugar Island.

The construction of Middle Neebish Island Channel, which warps around the north and east sides of Neebish Island, was completed in 1894, and the following year, a set of range lights, known as Lower Hay Lake Range (now Lower Nicolet Range), was established on the northern end of Neebish Island to guide mariners navigating through the lower portion of Lake Nicolet (Hay Lake).

A two-story duplex was built roughly a mile east of the range lights to house a head keeper and assistant keeper who were responsible for not only Lower Nicolet Range Lights but also numerous other fixed and floating lights in the area. The bottom story of the duplex is brick, while the upper is wood, and the structure had six rooms in each half and shared a room in the middle that served as schoolhouse for the children. Two brick outhouses were located behind the duplex, and the keepers also had a boathouse and a barn.

In 1931, a second set of range lights was established on the northern end of Neebish Island, roughly sixty-seven yards west of the first set, and the two sets were subsequently known as Lower Nicolet East Range (Front and Rear) and Lower Nicolet West Range and served to mark, respectively, the east and west half of the shipping channel in Lake Nicolet. Rather than construct a new pair of towers for Lower Nicolet West Range, two steel towers that that were discontinued at Windmill Point in 1930 were relocated to Neebish Island.

The steel towers were manufactured by Whitehead & Hales Iron Works of Detroit and were erected on the grounds of Windmill Point Lighthouse in 1907 to serve as a range for guiding mariners along the Detroit River between Belle Isle and Windmill Point. After the Windmill Point Lighthouse reservation was transferred to the Public Health Service in the late 1920s so a new Marine Hospital could be built, Windmill Point Range Lights were discontinued. The Annual Report of the Commissioner of Lighthouses for 1931 noted, Lower Nicolet West Range Lights have been started and the concrete bases finished, temporary structures having been erected to serve in the meantime. Erection of the steel superstructure is now in progress.

When originally constructed in 1907, the front steel tower was an inward-sloping cylinder, forty-two feet tall, but a straight, fourteen-foot-eight-inch section was added to the top of the tower in 1919 to increase its height. At the time of their removal to Neebish Island, the towers were modified to accommodate an acetylene lantern rather than the locomotive headlight that had been used in them at Windmill Point. This change allowed Lower Nicolet West Range to be unattended and visited only occasionally when the acetylene-gas cylinders needed to be serviced.

The lantern room atop the front tower has a steel projecting frame for a window that measures four feet, four inches high and three feet, eight inches wide. A steel arch-head door provides access to the base of the tower, and a sixteen-inch-wide vertical ladder leads to the floor of the lantern. The towers were bolted to octagonal concrete slabs, and daymark boards were added to them in 1975 to increase their visibility.

A three-foot-wide reinforced pier walkway and railway extending 630 feet from the base of the front tower to open water was built in 1933 to facilitate servicing of the acetylene tanks.

Hugh Cook was born in Canada but his parents relocated in 1890, when he was just a year old, to a homestead on Neebish Island, where his father farmed and cut timber for a local lumber firm. Hugh, the seventh son born to his parents, left school when he was fourteen to help his father farm, but he was always attracted to the water, and enlisted in the Coast Guard in 1906. After serving at lookout stations on St. Marys River and on destroyers out of New London, Connecticut, Hugh left the Coast Guard in 1928 and became a lighthouse keeper the next year. Following brief, temporary assignments at Little Rapids Cut, Fort Gratiot, and Grand Marais, Hugh was appointed assistant keeper on Neebish Island in 1929. At this time, Hugh and his wife Ruebina had five children, and the couple would have seven more children during their time at lights on St. Marys River.

Supplies for the Lower Nicolet Range Lights were delivered each July by the lighthouse inspector. The Cooks purchased their staples at Fort Brady in Sault Ste. Marie and supplemented them by raising about 200 chickens and keeping a couple of cows and pigs. At times, a hen would escape the enclosure and raise chicks on its own. To discourage such wanderlust, the captured hen was kept under a bushel basket for a few days and she would then return to her job of laying eggs. Wild berries were abundant on the islands in St. Marys River, and the Cooks would pick and then can hundreds of quarts of strawberries, thimbleberries, currants, raspberries, and blueberries.

The Cook children were excellent swimmers, and during the summer they would often swim out into the shipping channel, climb onto a buoy, and engage the sailors on the passing vessels in conversation. By the end of the summer, some of the sailors new all the names of the Cook clan. As a keeper, Hugh Cook was issued a revolver, and during prohibition he reportedly captured smugglers sneaking across the border from Canada. According to his grandson, Keeper Cook would confiscate the alcohol, release the rumrunners, and then tell them to bring more the next time. In 1941, Hugh Cook was promoted to head keeper and assigned to Little Rapids Lighthouse near Sault Ste. Marie.

By 1958, Lower Nicolet West Range Rear Light was being displayed from a skeletal tower, but the companion front light was still displayed from the 1907 steel tower. In 1993, a Historic American Engineering Record was written for the front range tower as mitigative documentation prior to the planned demolition of the 1907 tower by the Coast Guard. Though the front light and daymark board were transferred to a modern skeletal tower in the 1990s, the historic tower remains standing. The tower, which is in poor condition, will hopefully be left in place or transferred to a museum, where it could be restored. The keepers duplex on Neebish Island, located at the north end of Brander Road, remains standing and is now a private residence.

For a larger map of Lower Nicolet West Range Lighthouse, click the lighthouse in the above map.

This lighthouse is best viewed from the water, but you can also reach the lighthouse by taking Neebish Island Ferry to the island. Once on the island, go north on Ferry Road and then turn right onto 15 Mile Road. After 2.3 miles on 15 Mile Road, turn left onto Brander Road. Follow Brander Road to the northern end of the island, where you will see power poles and a trail on the left-hand side of the road. Park and follow the trail for just over a mile to the light.