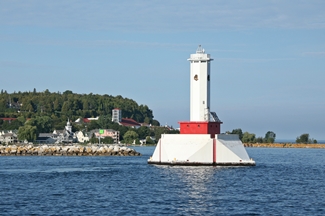 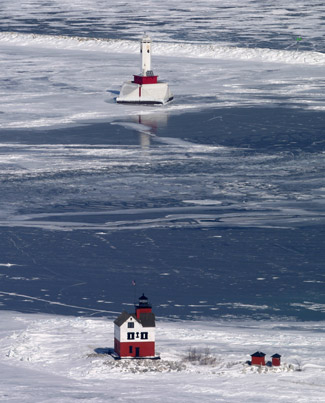 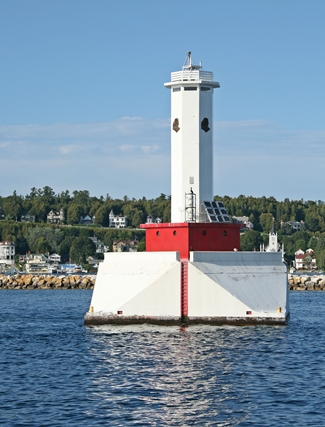 Round Island Lighthouse commenced operation in 1896 to mark the southern side of North Channel, the narrow passage between Round Island and Mackinac Island that is the most direct route for ships sailing between Lake Michigan and Lake Superior. In 1936, the Coast Guard developed plans for a new lighthouse to stand 1,000 feet off Mackinac Island and mark the opposite side of North Channel, but the erection of the structure was delayed until after the end of World War II. As an interim solution, a marker radiobeacon bell buoy was established 630 feet off Mackinac Island West Breakwater. Work on the modern lighthouse, known as Round Island Passage Lighthouse, was carried out during 1947, and the light was placed in operation on April 15, 1948, at which time Round Island Lighthouse became unattended.

The following description of Round Island Passage Lighthouse was carried in the Coast Guard Bulletin:

The substructure of the new lighthouse, 56 feet square up to the 1 foot line below mean low water, is a timber crib with cells at the perimeter filled with concrete and internal cells filled with 5-inch to 14-inch rock. The superstructure is concrete with a reinforced concrete deck. It has four vertical and four sloping sides, giving the lighthouse a new and unusually trim appearance. The tower is appropriately ornamented on each side with a 4- or 5-foot Indian Head plaque, symbolic of the area.

But the most interesting thing about Round Island Passage Light Station is its main light. Located in the top section of the 41 ½-foot tower, it is indeed a departure from the single light source arrangement that has been in use for centuries. This new light apparatus is a solid bank of sealed beam lamps of 3,000 candlepower which produce a characteristic of occulting green every 10 seconds. It is visible 16 miles. (These sealed beam lamps are similar to your present day automobile headlights.)

The passage between Mackinac Island and Round Island has long been regarded as extremely hazardous. It is now adequately guarded by Round Island Passage Light Station. This will result in a saving of time on trips and will relieve the congestion of Poe Reef Channel. This, in turn, will increase Great Lakes tonnage.

Another unique feature of the lighthouse was that instead of resident keepers, personnel at the Coast Guard station on Mackinac Island would control the lighthouse remotely via a submarine channel from an onshore control house.

Atop the towers forty-one-foot-square concrete deck stands a twenty-foot-square, steel-plate enclosure that has a height of eleven feet, three inches and is surmounted by the octagonal steel tower. A skeletal, steel, antenna, forty-seven feet, six inches high, originally stood atop the tower, giving the lighthouse and overall height of 120 feet, three inches. The bronze Indian Heads in relief commemorate the fact that the area was Native American country long before the white man came, and that Mackinac Island was a sacred spot and central meeting place for the tribes of the Great Lakes region.

The Coast Guard explained that the candlepower of the lights atop the tower could be proportioned as needed: By varying the number of reflectors in the various faces on the structure, it will be possible to provide a powerful light in the directions where it is most needed and a light of moderate candlepower toward other part of the horizon.

The lighthouse received a needed paint job by A.C.E. Coatings Unlimited of Oregon over a three-week period during the summer of 2009.

On May 1, 2013, the General Services Administration announced that Round Island Passage Lighthouse was excess to the needs of the Coast Guard and was being made available at no cost to eligible entities defined as federal agencies, state and local agencies, non-profit corporations, educational agencies, or community development organizations, for education, park, recreation, cultural, or historic preservation purposes. Interested entities were given sixty days to submit a letter of interest.

After no eligible party was found, the General Services Administration opened an online auction for Round Island Passage Lighthouse on August 18, 2014. The auction, which attracted just three bidders, closed on September 30, 2014 with a high bid of $65,500.

Round Island Passage Lighthouse was placed on the National Register of Historic Places on August 7, 2013.

For a larger map of Round Island Passage Lighthouse, click the lighthouse in the above map.

Round Island Passage Lighthouse can be viewed by taking a ferry from either St. Ignace or Mackinaw City to Mackinac Island. You can also see the lighthouse on eastbound lighthouse cruises offered by Shepler's.

Find the closest hotels to Round Island Passage Lighthouse