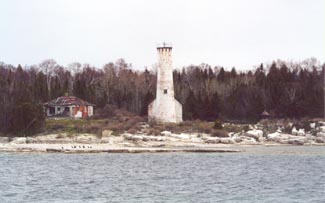 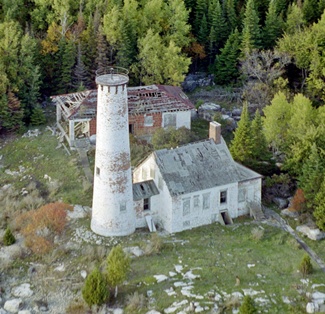 A lighthouse was built on Rock Island in 1837 to mark Rock Island Passage and one on Plum Island in 1849 to mark Deaths Door Passage. As most lake traffic bound to Green Bay was headed to the southern portion of the bay in the early 1800s, the two southernmost passages were the busiest, however, after the completion of the railroad line between Escanaba and inland iron ore mines in 1865, Little Bay de Noc at the northern end of Green Bay became a major port.

In its annual report for 1867, the Lighthouse Board wrote:

The already large and rapidly increasing commerce to and from the northern end of Green bay and lower lake ports now takes in daylight the northern passage from Lake Michigan into Green bay, because of its being much shorter and more direct. To enable vessels to use the same passage in the night, a light-house on Poverty island is necessary, and an estimate of the cost of building one is herewith submitted.

The commissioner of the General Land Office reserved Poverty Island for lighthouse purposes in 1867, but the Lighthouse Board had to repeat its funding request each year until Congress finally appropriated $18,000 on March 3, 1873.

Construction of Poverty Island Lighthouse commenced on August 28, 1873 and continued until a fire broke out on October 25 in the workers sleeping shanties and destroyed these temporary quarters along with some construction material. A work crew returned to the island on May 13, 1874 and labored until funds were exhausted that summer. On August 1, 1874, a sixth-order steamer lens was used to produce a fixed white light from a temporary lantern erected on the roof of the completed dwelling, and work stopped for the season. At this time, the top of the tower walls stood thirty-one feet above the water table, but another $3,000 was needed to finish the work.

Congress provided the additional funds on March 3, 1875, which allowed the tower to be completed in time for the light to be exhibited from the towers lantern room on August 10, 1875. The lighthouse was located on the southern end of Poverty Island and consisted of a circular brick tower connected to a brick dwelling by a covered passageway. A fourth-order Fresnel lens was used in the lantern room to produce a flashing red light at a focal plane of seventy-eight feet above the lake.

In 1883, a retaining wall was built around the footing and foundation courses of the tower to prevent settling. By this time, the tower was badly cracked due to faulty construction.

On June 17, 1884 the steamer Oscar Townsend, loaded with a cargo of ore, ran aground on Gull Island causing $7,200 in damages to its hull. A newspaper article reporting the incident read: A fog-signal at Poverty Island light would have saved the Townsend from disaster Tuesday. How long will it take the Light House Board to understand the tonnage entering Green Bay by that passage is large enough to be entitled to every method of protection? It evidently didnt take too much longer for the Lighthouse Board to take action, as the erection of a fog signal building began on August 15, 1885, and by October 7, it was complete and equipped with the boilers and machinery for a ten-inch steam whistle. The signal was used for the first time on October 15. The frame fog signal building was covered and lined with sheet-iron, and the water for the signal was taken directly from the lake through an iron pipe that ran to an offshore wooden crib. On average, the steam whistle was in operation 300 hours a year and was fed by a combination of coal and wood.

A large number of trees that obstructed the light from the east were cut down in 1888, the same year that the landing cribs at the stations boat harbor were rebuilt. Material for a circular oil house was delivered to the station in 1892, but the oil house was not erected until 1894.

On April 24, 1916, the intensity of the light was increased to 1,900 candlepower through the use of an incandescent oil vapor lamp. After $6,500 had been provided for its construction, work on an additional keepers dwelling began on October 23, 1920 and was completed the following year. This one-story bungalow measured twenty-four-and-half feet by forty-two-and-a-half feet and had a basement and porch. Its hollow tile walls were stuccoed on the outside and lathed and plastered on the inside. The dwellings hipped-roof was covered with asphalt roll roofing, and its floors were of hard maple.

Poverty Island Lighthouse was staffed by two keepers, a head keeper and an assistant, until a second assistant keeper was added to the station in 1887.

James McCormick served as head keeper at Poverty Island from 1911 to 1915 and had at least one brush with death during this time. In July 1912, Keeper McCormick had been to Escanaba to do some shopping and was returning to the island in the stations launch when it caught on fire. The following account of the incident is from the Escanaba Morning Press:

McCormick worked as long as he could to try and gain control of the flames and then finding that they were gaining headway rapidly, and that the tiny craft was doomed, he seized a life preserver and jumped over the side of the boat into the water.

After drifting about for a considerable length of time he was picked up by a passing steamer and taken to his home on Poverty Island. The gasoline launch burned to the waters edge and then sank.

The direct cause of the fire may never be known, but it is thought that there must have been a leak in the gasoline pipe and the escaping vapor was ignited by a spark from the engine, which might have been caused by a short circuit in the wiring.

Niels Jensen began his lengthy service as head keeper at Poverty Island in 1915. In 1923, his two assistants were William Lee and Benjamin Johnson, and that June Lee made a trip to Washington Island to pick up his wife and two of his children and bring them to Poverty Island for the summer. After returning to the station, fifty-seven-year-old Lee was helping unload the boat, when he said he didnt feel well and needed to go inside for a minute. A short while later, Lee was found dead on the bathroom floor, the victim of a heart attack. Keeper Jensen decided that Johnson should take the body to Washington Island. Alone with the corpse, Johnson set out on the twenty-mile voyage. After stopping at St. Martin Island Lighthouse to get directions and ask that help be sent to Poverty Island, Johnson set off again, but darkness and fog soon caused Johnson to lose his way and become stranded on a reef. He managed to free himself the next morning and continue to Washington Island, where he arranged for the funeral, and then returned to Poverty Island to pick up Lees wife and children.

After twenty-one years of service at Poverty Island, Keeper Jensen also met a tragic end. He was struck and killed by a car while walking to the annual school board meeting on Washington Island in October 1936.

In 1921, the worn-out boilers and steam whistle were replaced by oil-engine-operated compressors that powered a type F diaphone. The new fog signal sounded two blasts every thirty seconds and had a greater range than the steam whistle. A telephone cable was laid to the island in 1926.

James Goudreau spent his summers on Poverty Island when his father was second assistant keeper there in the late 1930s. There were quite a few children on the island as Keeper Benjamin Johnson had a half-dozen kids, and First Assistant Keeper Floyd Miller had eight or nine. James recalls that the kids found it hard to obey all the rules imposed by the Lighthouse Service, and the adults had a novel way of disciplining them. It was a big steel tank that they had cut a door in, and used it for a coal bin. And that was the prison for the kids. When you did something wrong, they put you in the coal bin and closed the door and locked it. You may stay there an hour, you may stay there all afternoon.

Benjamin Johnson, a veteran of World War I, began his service on Poverty Island in 1921 and spent more than twenty seasons at the station. Upon the death of William Lee in 1923, Johnson was promoted to first assistant, and then was made head keeper in 1936. Keeper Johnson joined the Coast Guard in 1941, and then retired from the service in 1943 due to ill health.

In 1952, the main light, fog signal, and dwelling were electrified, and the fourth-order lens was replaced by a new type 36 inch revolving light of 50,000 cp. The foghorn was discontinued in 1954, and the station was automated in 1958. By 1965, the lantern room had been removed from the top of the tower, leaving an exposed automated light. The discarded lantern room remained on the ground near the tower until the Delta County Historical Society was given permission to restore it and place it atop the renovated Sand Point Lighthouse in Escanaba.

Poverty Island Light was deactivated in 1995 and continues to steadily deteriorate. The lighthouse is sadly beginning to look like it belongs on a place called Poverty Island.

Located on the southern side of Poverty Island, seven miles from Fairport and the southern tip of the Garden Peninsula.
Latitude: 45.52244, Longitude: -86.66669

For a larger map of Poverty Island Lighthouse, click the lighthouse in the above map.

Poverty Island Lighthouse is best seen by boat. Excursions that pass by the island are offered during the annual Lighthouse Festival. Shoreline Charters offers an Out Island Adventure Cruise that passes the lighthouse.