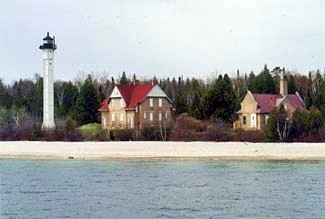 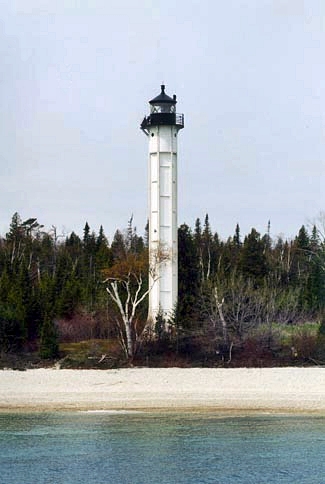 Green Bay, Lake Michigans largest bay, is nearly hemmed in by two peninsulas: Wisconsins Door County Peninsula and Michigans Garden Peninsula. An archipelago spans the gap between the two peninsulas, and herein are found the four primary entrances to Green Bay from Lake Michigan: Deaths Door Passage off the northern tip of Door County Peninsula, Rock Island Passage between Rock Island and St. Martin Island, St. Martin Passage between St. Martin Island and the Gull Islands, and Poverty Island Passage between the Gull Islands and Poverty Island. A lighthouse was built on Rock Island in 1837 to mark Rock Island Passage and one on Plum Island in 1849 to mark Deaths Door Passage. As most lake traffic bound to Green Bay was headed to the southern portion of the bay in the early 1800s, the two southernmost passages were the busiest, however, after the completion of the railroad line between Escanaba and inland iron ore mines in 1865, Little Bay de Noc at the northern end of Green Bay also became a major port.

Poverty Island Lighthouse was completed in 1875 to mark the northernmost passage, and in 1891, the Lighthouse Board decided it was time to mark the fourth passage: The passage between St. Martin and Little Gull Islands, if marked by lights and fog signals, would be much safer than Poverty Island Passage, as the entrance is capacious and unobstructed. A fourth-order light and a fog signal should be established on the northwest end of St Martin Island. It is estimated that they can be built for $15,000, and it is recommended that an appropriation of this amount be made for that purpose.

Congress approved the project on February 15, 1893, but did not provide the requested $15,000 until July 1, 1898. Authorities visited the island in September 1898 to select a site, and a forty-two acre parcel was subsequently purchased for the station. When plans and estimates for the required buildings were drawn up and bids solicited, it was discovered that another $14,000 was needed. All bids were therefore rejected, and a petition was sent to Congress for additional funds. Congress provided $10,000 more on January 28, 1902, and bids were invited in February 1903 for providing a metal tower, boilers for the fog signal, and construction materials for the dwelling, boathouse, and fog signal building.

After materials were transported to the island from Milwaukee, work commenced on the station in the spring of 1903. By July, sites had been cleared for the various buildings, and the boathouse was finished. In addition, the brickwork up to the second-story window sills of the dwelling was done, excavations were made for the towers foundation, and concrete footings for the fog signal building were in place.

The fog signal boilers and metalwork for the tower were completed under contract in early September 1903, and by June 25, 1904, all the stations buildings, consisting of a metal tower, a brick dwelling, a brick fog-signal house, a brick oil house, a frame boathouse with boatways, landing and tramway from the boathouse to the house, some 800 running feet, were ready for service. There was just one problem. The Lighthouse Board had no funds to hire keepers! The station was left in charge of custodians until a new appropriation allowed keepers to active the light and fog signal at the opening of navigation in the spring of 1905. Bernhard Pizzalar, who had previously served as first assistant and second assistant at Poverty Island Lighthouse, was appointed the stations first head keeper, with Christian E. Christensen as first assistant and Niels P. Jensen as second assistant.

The hexagonal metal tower on St. Martin Island stands seventy-five feet tall, and its fourth-order Barbier, Benard, & Turenne Fresnel lens originally produced alternate red and white flashes, spaced by five seconds. Six steel buttresses run the length of the tower and then fan out at the ground, where their latticed bases attach to a massive concrete foundation. The stations ten-inch steam whistle sounded a three-second blast every thirty seconds during periods of reduced visibility.

The intensity of the light was increased to 24,000 candlepower on April 17, 1916, when the use of an incandescent oil vapor lamp was introduced. A submarine telephone line was run to St. Martin Island and Poverty Island in 1926, connecting the remote stations to the exchange in Sturgeon Bay, Wisconsin. At the opening of navigation in 1931, a radiobeacon was established on St. Martin Island. The islands fog signal was upgraded to an air tyfon in 1933, and in 1940 the radiobeacon and fog signal were synchronized so they could be used for distance finding.

In 1943, Herbert and Eva Fadel moved from Pottawatomie Lighthouse to St. Martin Island Lighthouse, where Hebert had been appointed first assistant keeper. The well had been condemned before we got there, recalled Eva, and the water problem was never solved during our stay. The couple was thus forced to obtain their water from Lake Michigan, and when a green scum developed on the lake or the waves were too high to draw water, they had to forego their coffee and tea and subsist on canned juices. The Fadels spent the winter of 1943  1944 in Milwaukee, and when they returned to the island the next spring, ice forced the Coast Guard vessel to anchor a quarter-mile offshore. Laden with gunny sacks filled with groceries, the Fadels had to jump from ice floe to ice floe to reach the station.

Life of a lighthouse keepers wife wasnt all bad. Eva developed a keen interest in birds after spotting an eagles nest near Pottawatomie Lighthouse, and on St. Martin Island, she canned thirty quarts of wild blackberries one summer. Following their time on St. Martin, the Fadels spent eight years at Waukegan and eleven at Wind Point Lighthouse.

After having served as one of the last civilian keeper of Pottawatomie Lighthouse, Ernest Lockhart was transferred to St. Martin Island in 1946. In 1966, Admiral Charles Tighe of the U.S. Coast Guard presented Keeper Lockhart with a thirty-year service pin, and in May 1969, the Wisconsin Legislature issued a certificate of commendation to Ernest Lockhart upon his retirement as keeper of St. Martin Island Lighthouse after thirty-four years of service.

The Nature Conservancy acquired nearly 1,244 acres, or ninety-four percent, of St. Martin Island from the Fred Luber family of Milwaukee in 2013, and another thirty-six acres the following year from David Uihlein, Jr., also of Milwaukee. The Little Traverse Bay Bands of Odawa Indians own the remainder of the island, which includes the automated light station. In 2015, St. Martin Island, which provides critical stopover habitat for migrating birds, became part of Green Bay National Wildlife Refuge.

Located on the northeastern side of St. Martin Island, eighteen miles from the tip of the Door County Peninsula.
Latitude: 45.50356, Longitude: -86.75803

For a larger map of St. Martin Island Lighthouse, click the lighthouse in the above map.

St. Martin Island Lighthouse is best seen by boat. Excursions that pass by the island have been offered during the annual Door County Lighthouse Festival. Shoreline Charters offers an Out Island Adventure Cruise that passes the lighthouse.

The lighthouse is owned by U.S. Bureau of Indian Affairs and managed by Little Traverse Bay Band of Odawa Indians. Grounds/dwelling/tower closed.