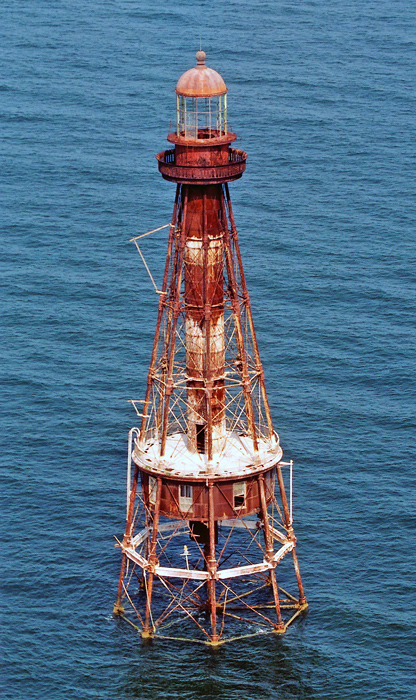 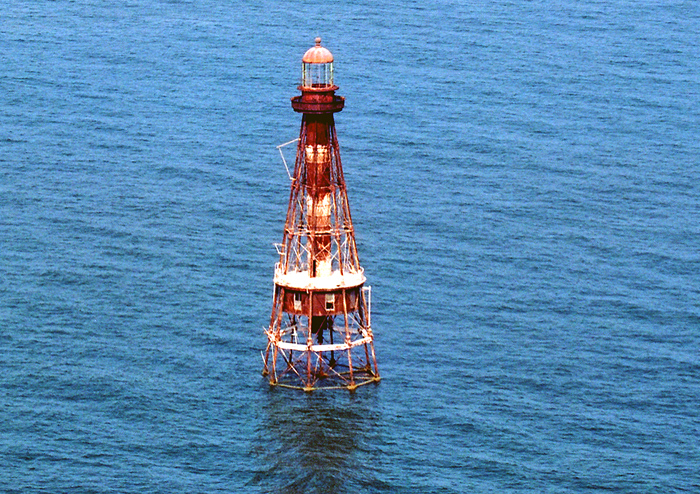 Isle Dernier, French for Last Island, was so named because it was the westernmost of a string of barrier islands that stretched west over ninety miles from the mouth of the Mississippi. In 1848, the Louisiana Legislature petitioned Congress for a lighthouse to mark the island. Money was soon granted, not for a lighthouse, but rather for a lightship to be stationed several miles southeast of Last Island on Ship Shoal.

Instead of building a new vessel, the Revenue Cutter McLane was converted into a lightship, showing two red lanterns from its masts, at a cost of $12,774.67. On December 29, 1849, the lightship, rechristened Pleasonton, after the Fifth Auditor of the Treasury, Stephen Pleasonton, took up station on the shoal.

In 1852, Stephen Pleasontons thirty years of overseeing U.S. Lighthouses came to an end with the creation of the Lighthouse Board. The service of the Pleasonton would soon come to an end too, as the board decided to construct a permanent lighthouse on Ship Shoal. The lighthouse would be an iron skeletal tower, modeled after those successfully established on the reefs surrounding the Florida Keys. Several years would pass before the necessary funds were granted for the lighthouse, and in the interim, disaster struck Last Island.

Last Island served as a retreat for the wealthy, who migrated to the island to escape the oppressive summer heat in New Orleans. The salt water surroundings were a natural barrier for disease-carrying mosquitoes, and the fresh air had a positive salutary effect as well. On August 10, 1856, during the peak of the summer season, a hurricane struck the island. Over 200 people lost their lives, most by drowning, as the storm swept over the island. As a result of the hurricane and subsequent storms, Isle Dernier was fragmented into five smaller islands: East, Trinity, Whiskey, Raccoon, and Wine.

In January 1858, the iron Ship Shoal Lighthouse was assembled at I.P. Morris Companys Port Richmond Iron Works in Philadelphia and then taken apart and shipped to Louisiana to be erected on Ship Shoal. Eight vertical, thirty-foot screwpiles were embedded fifteen feet into the shoal, and atop the piles, the sloping tower rose to a height of 125 feet. At the base of the tower, positioned twenty-feet above the water, was a two-story, cylindrical dwelling for the keepers, and crowning the structure was a second-order, Henry-Lepaute Fresnel lens. The light was activated for the first time at sunset on the evening of Wednesday, February 29, 1860 with William Croft serving as the head keeper.

Like many of the Gulf Coast lighthouses, Ship Shoal Lighthouse was caught in the north-south struggle of the Civil War. Around the start of the conflict, Confederates removed the lens and rotating apparatus from the tower and took them to Berwick for storage. Union forces later captured the tower and returned it to service on November 10, 1864 using a new Fresnel lens. The original lens was recovered in 1865.

Though Last Island was considered a healthy retreat, such was not true for Ship Shoal Lighthouse. By 1866, several keepers at the light had become sick and even paralyzed. The source of their problems was soon discovered to be the red lead paint used on the tower. The stations drinking water, which fell on the tower as rain and was stored in the towers cistern, was being contaminated by the red paint applied to the lighthouse. After the discovery, the paint was quickly removed using a solution of caustic potash, which made the tower look like new iron which had never been painted. The tower was then given a coating of coal tar to prevent rust.

The Lighthouse Board reported the three-month-long effort in cleaning and painting the tower yielded immediate benefits:

The result of the operation was that the health of the keeper and his assistants at once improved, and there has been no sickness at the place since. The importance of removing the cause of the sickness prevailing at this place cannot well be overestimated. Several persons had been paralyzed, and this fact becoming known was likely to deter anyone from accepting the position of a keeper. It is believed that the adulteration of the water with lead was the only cause of the deplorable sanitary condition of the station, and indicates the necessity of avoiding the use of lead paints or lead pipes at any station where the supply of water depends upon the drainage from the structure itself. This station is now in excellent condition.

The center of a severe cyclone passed over the lighthouse in October 1868, and the whipped-up seas caused such a vibration of the tower that the oil was thrown out of the reservoirs, and all efforts to relight the lamps were unavailing for six hours.

By 1870, the seabed beneath the tower was being washed away, exposing more of the pile foundation and causing the tower to develop a considerable lean to the northeast. The lean was enough to cause irregularities in the operation of the eight-flash-paneled lens, which revolved once in four minutes to produce a white flash every fifteen seconds. Concrete and ballasts placed around the foundation caused a gradually shoaling all around the lighthouse, but after a few years, a large portion of this material had been carried a considerable distance west of the lighthouse and granite blocks were brought in to protect the foundation.

In 1876, Keeper James Williams and Assistant Keeper Frederic Hamilton caught a shark measuring nine feet eight inches. On cutting it open, they found a watch, two metal buttons, and a buckle in the creatures stomach, leading them to believe it had made a meal of some poor unfortunate. The watch was fully jeweled and claimed by Keeper Williams.

Edward Dunn was serving as head keeper at Ship Shoal Lighthouse in 1882 with three assistant keepers, when one day, two of the assistants headed to Morgan City for supplies. Five days after the pair had departed, Keeper Dunn and Third Assistant Keeper Fred Leach were tarring the outside of the tower, when they noticed a ship becalmed south of the tower. Leach rowed out to the boat and found James Woods, a stranger, aboard the vessel the two keepers had taken to shore. Woods claimed that he had purchased the boat for $100 in Morgan City and was on his was to Pascagoula.

Leach towed the vessel back to the lighthouse, where Woods was fed and granted full access to the station. During his fourth night at the lighthouse, Woods sneaked into Leachs room and attacked him with a hatchet. Startled from his sleep by a searing pain, Leach fought back and cried out Murder!, Murder!, attracting the attention of Keeper Dunn. An exchange of gunfire then ensued, during which both keepers were struck three times and Woods was shot in the knee. The keepers barricaded Woods in the upper part of the tower, and though this prevented them from tending the light, it cut Woods off from any provisions and forced him to eventually surrender.

Keeper Leach took the stations prisoner to Morgan City, where Woods was dispatched to New Orleans and Leach was treated for his wounds. Woods was sentenced to fourteen years for the attack on the keepers, while the disfigured Leach was later described as a hideous-looking man, all the lower left side of his face having been chopped away.

If the newspaper accounts are true, Peter Williams would have been serving as first assistant and Louis Johnson as second assistant keeper at the time of the brutal attack. Both of these keepers survived the incident, as Johnson would later serve as head keeper at Ship Shoal and Williams is listed as having resigned his position.

Over the years, storms continued to sculpt the sandy shoal beneath the lighthouse, jeopardizing the towers foundation. Cement, rip rap, and granite blocks were placed around the foundation to retard erosion on more than one occasion, but by the time the station was automated in 1929, the tower had developed a noticeable lean. The foundation must be fairly secure as it has weathered numerous storms since losing its resident keepers.

Ship Shoal Lighthouse was discontinued and abandoned in 1965. Time has since taken its toll on both the lighthouse and the remnants of Last Island. There was a glimmer of hope for the lighthouse in the 1990s, when the Town of Berwick publicized plans to bring the tower ashore to join the relocated Southwest Reef Lighthouse in a park along the banks of the Atchafalaya River, but this action appears to have been abandoned.

In 1998, restoration work was done on the remaining pieces of Last Island with yards of sand being suctioned up and used to elevate the islands. New plantings should help the islands endure the forces of nature. Fighting Mother Nature is a costly battle, and in the end, the islands and the lighthouse might both be casualties.

For a larger map of Ship Shoal Lighthouse, click the lighthouse in the above map.

Ship Shoal Lighthouse is a long way from anywhere and is thus best seen by boat or plane. Captain Bill Lake fishes near the lighthouse in the summer, and has some information on the lighthouse at his website.


We chartered a plane to fly us out to the lighthouse. Before taking off, I had entered the coordinates for the lighthouse into a GPS receiver. Unfortunately, I failed to notice that the map coordinates were in minutes and seconds, not the decimal format I typically use. The pilot had not seen the lighthouse before, so we just had to rely on instinct and our position relative to Raccoon Point to find the structure. Just as the thought that we might not get to see the lighthouse started to develop, the pilot spotted something on the horizon. It's a good thing he was blessed with keen eyesight, as I sure didn't see it at first it. Only the upper portion of the dwelling remains at the lighthouse. It seems the bottom portion vanished sometime during the late 1990s.