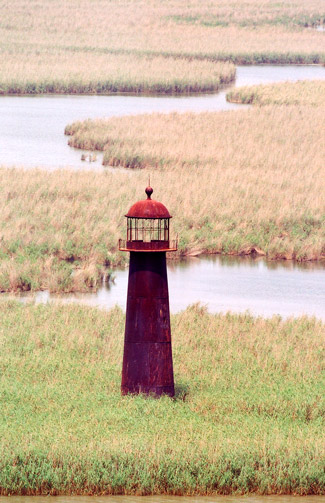 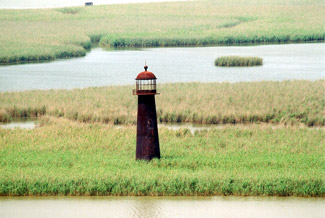 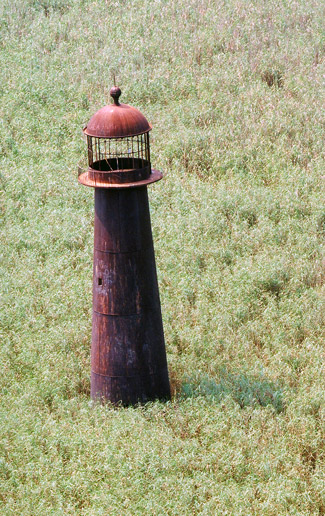 If you take a look at a map of Louisiana, it doesnt take much imagination to deduce why the mouth of the Mighty Mississippi is known as the Birdfoot Delta. From Head of Passes, located just south of the town of Venice, the river branches out into three main channels, resembling the familiar three-toed imprint left by a shore bird. The channel leading east is known as Pass a lOutre, which means the pass beyond. Originally, this pass was known by a slightly different arrangement of letters - Pass a la Loutre, meaning otter pass in reference to the former abundance in the area of these pelt-bearing animals. The other two channels carry ship traffic from Head of Passes to the gulf in a direction implied by their names  South Pass and Southwest Pass. Rene Robert Cavalier found the mouth of the Mississippi River in 1682 not by sailing along the shores of the Gulf of Mexico, but rather by drifting downriver from the French settlements in the Great Lakes region. To mark his discovery, Cavalier set up a navigational marker displaying the French coat of arms, and before the end of that century, the French had established a fort at the entrance to the river. During the next century, various crude beacons were erected in the area to improve navigation.

Following the Louisiana Purchase in 1803, the United States government allocated funds for the construction of a substantial lighthouse on Franks Island, located at the entrance to Northeast Pass, a branch off Pass a lOutre. Initially, while the new lighthouse was being constructed, a temporary beacon was established nearby atop an existing tower. Then in 1821, the lightship Aurora Borealis, the gulfs first, served offshore near Franks Island until the lighthouse was completed.

Benjamin H. Latrobe, architect of the United States Capitol, drew up the plans for the lighthouse on Franks Island. His design called for a magnificent structure consisting of a conical brick tower surrounded at its base by a circular dwelling, which was in turn encircled by an overhang supported by stone columns. The detailed plan for the tower was a bit grandiose for the mosquito-infested swampland, and no bidder could be found to assume the contract. Construction was further delayed by the War of 1812.

In 1816, Henry Latrobe simplified his fathers design, but still no contractor could be secured, even for the tempting sum of $55,000. In desperation, the Treasury Departments Commissioner of Revenue persuaded his friend Winslow Lewis to accept the job. Lewis already supplied the reflector and lamp system used in American lighthouses, but this was his first foray into lighthouse construction. He would eventually become Americas most prolific lighthouse builder, with more than eighty lighthouses to his credit.

Lewis was cautious and demanding in accepting the contract. His minimum fee was $79,000, and he insisted on having an inspector on site to verify his strict adherence to the proposed design. Lewis believed this safety measure would exonerate him in case the project failed.

Construction on the lighthouse began in 1818. As completion drew near, a growing network of cracks appeared on the tower. Then, on January 31, 1819, one side of the foundation suddenly settled, toppling the decorative columns and rendering the lighthouse useless. After receiving full remuneration, Lewis offered to build a new tower with a proper foundation for less than $10,000. Using materials from the condemned tower, Lewis built a second lighthouse on the island and gave his personal guarantee that it would be sound. Lewis light was activated in March 1823 and served through most of 1855, when a tower was placed nearby at Pass a lOutre.

Storms, tides, and the current of the mighty river are constantly transforming the marshy land of the Birdfoot Delta. Over time, Franks Island gradually disappeared and Lewis abandoned tower settled some twenty feet into the mud. Remarkably, the tower remained erect for years, until in 2002 the towers foundation was undermined, and it toppled into the murky water.

As Northeast Pass, serviced by Franks Island Lighthouse, started to shoal in, Pass a lOutre to the north deepened, providing better access to the river for large vessels. A tall iron tower in use at Head of Passes farther upstream was considered unnecessary, so rather than build a new lighthouse at Pass a lOutre, the iron tower was dismantled and relocated. Congress appropriated $6,000 on March 3, 1853 for moving the tower to Pass a lOutre and building a small beacon at Head of Passes. A new dwelling was constructed for the keeper at Pass a lOutre, and the light atop the relocated tower was lit for the first time in December 1855. John Lory, the last keeper of Franks Island Lighthouse, was the first keeper at Pass a lOutre. The third-order lens installed atop the relocated iron tower produced a fixed white light varied every minute-and-a-half by a bright flash at a focal plane of seventy-seven feet.

The lighthouse was put out of commission during the Civil War, when in June 1861 Conference forces removed the lamps from the station and destroyed the 120 gallons of oil on hand. Union forces later took down the Fresnel lens, and Confederate soldiers burned the keepers dwelling on January 1, 1862. The light was returned to service on April 20, 1863, after a new keepers dwelling was built and the iron tower had received a new brick liner and a thick coat of coal tar for rust prevention.

By 1868, the keepers dwelling, which rested on nine brick piers, had settled three feet into the soft ground. Around the same time, the tower also started to sink. The floor of the lighthouse was originally eight feet above the ground, but by 1876, water from high tides was flooding the tower floor. To provide continued access to the tower, the floor was raised five feet and a three-foot-square section of the tower above the doorway was cut out to create a new entrance.

In 1870, the Lighthouse Board requested funds for a steam fog signal at Pass a lOutre, noting that its importance and usefulness can hardly be calculated in pointing out this entrance during the dense and frequently long-continued fogs which envelop the Delta of the Mississippi during the winter months. Congress provided $10,000 on March 3, 1871 for fog signals at Pass a lOutre and Southwest Pass, and a twelve-inch steam whistle commenced operation at Pass a lOutre later that year. The fog signal was discontinued in 1880, and around that time new brick were built under the dwelling to raise it four feet above the marsh.

A powerful hurricane struck the station on September 28, 1917, blowing away the tool house and inflicting heavy damage to the dwelling, walks, and wharf. Assistant Keeper Steven Coludrovich was in charge of the station in the absence of the head keeper and was commended by the Secretary of Commerce for performing his duties under hazardous and unusual conditions. The dwelling was subsequently raised and placed on concrete piers, and another new door was cut in the tower.

Mud lumps started to form in Pass a lOutre around the end of the nineteenth century, reducing the depth of the channel to just seven feet. Large vessels were then forced to access the river via an alternative pass. In 1919, the tower was given a spiral black and white daymark, similar to the candy cane striping at Cape Hatteras, North Carolina and St. Augustine, Florida.

Keeper John McNamara retired from Pass a lOutre on April 26, 1926, his seventieth birthday. McNamara served as a fireman and deckhand on vessels in the eighth lighthouse district from 1876 to 1893 and again from 1896 to 1910, and then served as a lighthouse keeper from 1911 to 1926, making a total of forty-six years of service.

Pass a lOutre Lighthouse was decommissioned in 1930, but did see life again during the final years of prohibition when the Coast Guard used it as a lookout for spotting rumrunners.

The towers spiral bands had started to fade by the 1950s, and by the end of the century, the tower was covered by rust and graffiti. No outbuildings remain at the station. With less than half of its original height showing above ground, the metal tower continues to be ever so slowly swallowed up by the marshlands of the Birdfoot Delta. Around 2007, the lantern room, loosened by Hurricane Katrina, fell off the tower. It seems that it will be only a matter of time before Pass a lOutre Lighthouse, true to its name, passes beyond.

Located in the Mississippi River Delta near the junction of North Pass and Pass a Loutre. This area is part of the Pass A Loutre Wildlife Management Area.
Latitude: 29.19014, Longitude: -89.03706

For a larger map of Pass a l'Outre Lighthouse, click the lighthouse in the above map.

Pass a l'Outre Lighthouse is best seen by boat or from a plane. Aerial tours of the New Orleans area, which can include multiple lighthouses, are available through Southern Seaplane.

The lighthouse is owned by the U.S. Fish and Wildlife Service. Tower closed.

Find the closest hotels to Pass a l'Outre Lighthouse