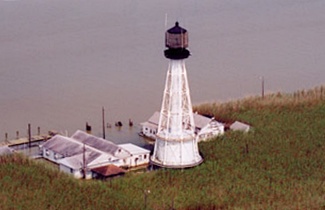 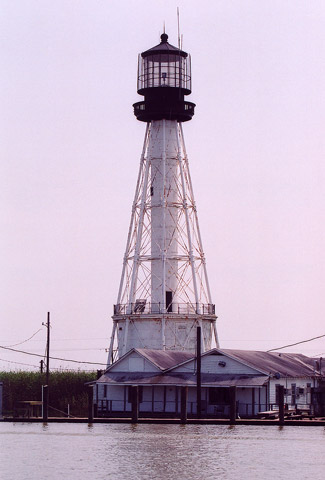 At the entrance to South Pass, where water from the Mississippi River mixes with that of the gulf, stands a white skeletal tower known as South Pass or Port Eads Lighthouse. Port Eads was a bustling construction camp in the 1870s, when master builder James Eads put his experimental jetties in place. Eads jetties were a remarkable success. By constricting the outflow of South Pass, the jetties succeeded in scouring out the entrance channel to a depth of thirty feet. With this increase in depth, large steamers were able to safely access the river, and thereafter millions of dollars were saved annually in maritime insurance. During the twenty years following the completion of the jetties, trade at New Orleans doubled. The jetties put in place by Eads still survive, though they lie buried beneath layers of sand. In 1982, Eads jetties were designated a National Historic Engineering Landmark, and a plaque commemorating the honor has been placed a few miles upriver at Fort Jackson.

Several lighthouses have stood at South Pass, including some which were located on Eads jetties. The first South Pass Lighthouse was built by Winslow Lewis, who returned to the Mississippi Delta a couple of years after having successfully completed a tower at Franks Island to mark Northeast Pass. Lewis also supervised work on a tower at nearby Southwest Pass in parallel with the work at South Pass. To assist mariners in distinguishing his entrance lights at the three passes from one another, Lewis gave each a unique daymark and light characteristic. The South Pass tower exhibited a flashing light and was encircled by a horizontal black band midway up the white tower. At Southwest Pass, a fixed main light was shown above three secondary lights, and the white tower was painted with vertical black stripes. The tower at Franks Island was painted all white and displayed a single, fixed beam of light.

On March 3, 1831, Congress appropriated $40,000 for lighthouses to mark South Pass and Southwest Pass, and Winslow Lewis was awarded a $19,150 contract to erect the two lighthouses, along with two dwellings, and fit up the towers with his patent lamps and reflectors. Lewis built his tower at South Pass on Gordons Island, named after the customs collector at New Orleans. The lights flashing characteristic was created by placing seven lamps and reflectors on either side of a revolving chandelier. Keeper Henry Heistand first lit he lamps on May 15, 1832.

Lewis had planned to drive piles into the soft ground to provide a secure foundation for his tower, until Martin Gordon persuaded him to float the tower on a cross-hatched pattern of squared timbers. In the months following the completion of the tower, the channel at the entrance to South Pass shifted and Gordons Island became prone to flooding. In 1839, logs carried by the river struck the keepers dwelling, jarring it from its foundation. The lighthouse also suffered damage and was subsequently declared a total loss. A storm in 1841 erased all signs of the stations existence.

Lewis was tapped to build a replacement for his masonry tower at South Pass. This time an octagonal wooden tower was constructed, with the thought that it could easily be moved if erosion threatened. The lighthouse was painted with the stations signature black band, and the lighting apparatus from the original tower was reused. The tower, completed in June 1842, never had to be moved, as after just five years of service it was so decayed that yet another replacement was required.

The collector at New Orleans requested that the third South Pass Lighthouse be an iron lighthouse. His request, however, was not fulfilled and in 1848, another wooden octagonal tower, rising to a height of fifty-four feet, with a forty by thirty foot Victorian dwelling built into its base, was constructed at the pass. A Fresnel lens was installed in this lighthouse in 1859.

Confederate forces removed the lens and oil from the station shortly after the outbreak of the Civil War, but after the lighthouse came under Union control, it was refitted with a revolving third-order Fresnel lens in the fall of 1862 and returned to service.

In 1868, the Lighthouse Board provided the following justification for a new lighthouse at South Pass:

In view of the great importance of this light, which is the first one made by all vessels coming from the northern ports and the West India islands, and frequently by those coming from the western and southern coast of the Gulf, the insufficiency of the present third order light, and the perishable nature of the present structure, which is entirely of wood and surrounded by high swamp cane, readily set on fire by malicious or careless persons; and in consideration of the fact that the present lighthouse is getting old, and therefore likely to be a constant source of expense for repairsit is deemed important to provide for the early erection at this place of a new structure, which should be of the first order.

A replacement light would be built over a decade later, but not before other lights were established nearby. In 1878, the Lighthouse Board noted that the deepening of the pass, thanks to the jetties built by James Eads, had made South Pass the principal entrance to the great river. On May 10, 1878, lights were established on the extremity of the east and west jetties to better mark the important entrance. Separate keepers were later assigned to care for the jetty lights, and a dwelling was built for them in 1886.

On March 3, 1879, Congress provided $50,000 for a first-order lighthouse at South Pass. Borings were made to determine the necessary character of the foundation, and then four months were spent building a suitable foundation. A hexagonal tower, originally intended for Trinity Shoal, was erected at South Pass with a two-story, iron-clad, dwelling built into its base. The new South Pass Lighthouse stood 100 feet southeast of its predecessor and employed a first-order Fresnel lens to produce a white flash every five seconds at a focal plane of 105 feet. The light was placed in operation on August 25, 1881, and the old wooden tower was subsequently torn down.

In 1886, a small dwelling that had been previously used by custom officers was renovated and converted into a residence for the head keeper of South Pass Lighthouse. A 3,000-gallon cistern was also added at this time along with a thirteen by twenty-four-foot kitchen. Also in 1886, a beacon was established atop four wooden piles driven into the river to form a range with South Pass Lighthouse to help mariners pass safely between the mud lumps located about 1,000 feet outside the jetties.

Congress appropriated funds in 1888 to establish higher and more powerful lights on the jetties at South Pass along with a fog signal for the east jetty. Work began in 1890 on a square, white pyramidal wooden tower, which, along with a fog bell tower, stood atop piles on the east jetty, two miles from South Pass Lighthouse. These new structures went into operation on April 15, 1891, displaying the light from a fifth-order lens and tolling the bell every ten seconds as needed.

In 1894, the Lighthouse Board placed a two-masted schooner, equipped with a twelve-inch steam whistle, about a mile off the jetties to serve as a lightship for helping mariners locate South Pass. This vessel served until 1912, and the station was then unmarked until after World War I. LV-102 was anchored off South Pass in 1918 and served until the lightship station was discontinued in 1933.

A new twenty-four-foot-square building was erected near the west jetty in 1919 to house an air diaphone and a front range light. The building was painted white with a central vertical strip on its seaward face, and its light ranged with a square, pyramidal, slatted structure on piles. A new six-room dwelling for the keeper of the jetty lights was completed near the fog signal building in 1921.

On April 30, 1900, the color of South Pass Lighthouse was changed from red to white with a black lantern to help mariners distinguish it from the dark tower at Southwest Pass.

I.C.M. Erickson was second assistant keeper of the jetty lights, when on April 8, 1923, he set off across the river in a rowboat to wind up the weight of the fog bell on the east jetty. Perhaps he was tired that day, as the current overpowered him and swept his rowboat out into the gulf. An outbound Spanish freighter, the Conde-de-Churruca, picked him up fifteen miles from the station and radioed the mainland that they would take the weary keeper with them to their next port of call  Tampico, Mexico, over 700 miles away. Erickson eventually returned to his station, and almost exactly a year later he was again carried out into the gulf as he attempted to cross the river. This time, Erickson never made it back to the station and was presumed drowned.

The first-order Fresnel lens was removed from South Pass Lighthouse and replaced by a DCB-224 around 1945. The tall iron tower, which remains active to this day, lost its resident keepers in 1971.

Located in the Mississippi River Delta near the mouth of South Pass. This area is part of the Pass A Loutre Wildlife Management Area.
Latitude: 29.01535, Longitude: -89.16685

For a larger map of South Pass Lighthouse, click the lighthouse in the above map.


This webpage appears in the movie The Lucky One, though the lighthouse is listed as River Lighthouse and its location is given as Hamden, Louisiana. After surviving a raid while serving in Iraq, Logan Thibault (Zac Efron), a marine, discovers a photograph of an attractive woman, with the message "keep safe x" on the back. Logan fails to find the owner of the photograph but is led to believe that having it in his possession protected him in multiple life-threatening situations. After the end of his deployment, Logan sets out to find the woman in the photograph, and the lighthouse in the picture, which he identifies through lighthousefriends.com, turns out to be the key. You can see this webpage on the movie's trailer.