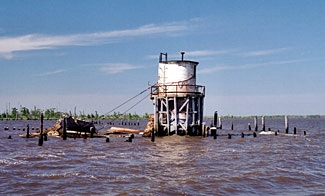 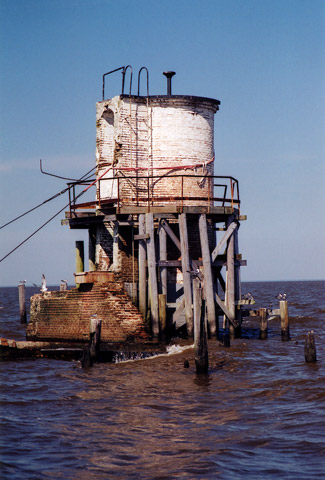 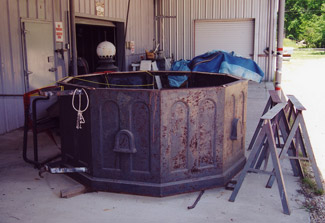 In 1682, French explorer La Salle discovered the mouth of the Mississippi River by sailing down the river from French settlements in the Great Lakes region. La Salle named the area near the rivers mouth Louisiana, after his king, Louis XIV. A few years later, La Salle attempted to find the Mississippi from the Gulf, but ended up in Texas, and was killed while trying to make it back to the river.

Under the direction of Jerome de Pontchartrain, minister of the Marine of France, a second expedition led by Pierre Le Moyne Sieur dIberville was dispatched to locate the river in 1698. After finding the mouth and sailing upstream to a point near present day Baton Rouge, Iberville was informed by local Indians about a backdoor route (Manchac in the Choctaw language) to his ships, which were anchored in the Mississippi Sound near Biloxi. This shortcut led Iberville through a bayou, two lakes and another bayou before reaching the sound. Iberville named the first and smaller of the two lakes Maurepas after Pontchartrains son, while the larger lake was named after Pontchartrain himself. Today, the winding, seven-mile-long waterway which links the two lakes is known as Pass Manchac.

For the next two hundred years, ship captains used the lakes to reach Louisianas interior, avoiding the daunting task of sailing upstream against the powerful Mississippi current. On March 3, 1837, Congress appropriated $6,000 for a lighthouse at the northeastern end of Pass Manchac to mark this link between the lakes. A conical brick tower was constructed by Francis D. Gott of New Orleans, and Isaac Zachary, the first keeper, received his appointment on January 16, 1839.

The first lighthouse was one of four that have marked the pass. Mud mortar was used in the original tower instead of lime and sand, and in just a few years the tower was disintegrating and had to be rebuilt. Most of the material in the tower could be reused in the second tower, and the construction bill came in at a low $1,630. The replacement tower, built in 1842, didnt last much longer than the first. The lake encroached on the station, until the towers foundation was completely submerged and the integrity of the tower was compromised.

The third Pass Manchac Lighthouse, erected in 1846, was significantly different than the first two. Built using cypress trees found abundantly in the nearby swamps, the lighthouse consisted of a two-story Victorian dwelling with a tower rising from its center. The focal plane of the light was forty-five feet above the lake. A tower based on the same design was later constructed at South Pass.

The third tower had the same problem as its predecessors: it was built too close to the shore. As the buffer zone between the tower and the lake eroded away, the tower developed a lean. A breakwater was built around the lighthouse in a vain attempt to save the structure, but in 1855, the lighthouse inspector noted:

This process seems to have been arrested for the present by the repairs which have been made; but satisfied as I am that the establishment, if not swept away, will require much expenditure to preserve it any length of time, I recommend that it be rebuilt in a permanent manner. A wooden dwelling on screw piles, to show a light from its top, would be cheap and secure; but it would seem more desirable to build with bricks, on wooden piles and a grillage.

The Lighthouse Board requested funds for the construction of a fourth Pass Manchac Lighthouse, and Congress responded by providing $10,000 on August 18, 1856 for a new lighthouse and dwelling.

A construction site was selected two hundred feet northwest of the third lighthouse on a spot of ground that was not prone to flooding. The lighthouse design called for a one-and-a-half-story brick dwelling connected to a cylindrical tower of roughly the same height. This cylindrical tower was the first and only one to be built along the Gulf Coast. A system of reflectors was used in the tower upon its completion in 1857, until a fourth-order lens was provided in February 1859. Confederates removed the lens for safe keeping on September 18, 1861, as the Civil War affected the area.

The war was hard on the tower. Lighthouse Engineer Max Bozano reported that as might be expected, there was all possible damage done, such as carrying away doors, windows, breaking the lantern glass by making a target of it. The lantern had to be replaced and a new granite deck installed, but the lighthouse was repaired in just over three months and was back in service in December 1866 using a fifth-order Fresnel lens.

On March 3, 1871 Congress provided $1,700 for the construction of a 200-foot-long breakwater to protect the station from erosion caused by waves. The breakwater was built in 1872 using twelve-inch-square yellow pine piles and consisted of two faces that met at an angle of 120°. The piles penetrated eight feet into the lake bed and extended seven feet above the land. In 1886, the breakwater was rebuilt using cypress piles, but it was blown down in a hurricane in August 1888 and had to be rebuilt again. To prevent the recurring damaged to the breakwater, 1,714 tons of rock were placed around it in 1902 followed by another 800 tons the next year.

In 1898, a 1,200-pound fog bell was suspended in a newly constructed tower and struck by machinery to aid mariners during periods of low visibility. An oil house was added to the station in 1909.

The dwelling at Pass Manchac was home to the Succow family for over fifty years. Anthony Succow began his service as keeper in 1868. His wife, Mary, took over in 1873, and she was followed by her son Hugo in 1909. Hugo Succow was serving as keeper in 1915 when a powerful hurricane struck the area. Three-year-old Mary Rose Succow huddled in her fathers arms, while her mother clutched the familys eighteen-month-old baby. As the waves beat against the house, Mrs. Succow told her husband Hugo, all we can do now is pray, and right at that moment, the storm quieted, and the lighthouse quit shaking. The storm left water lilies on top of the disfigured breakwater. The Secretary of Commerce commended both Keeper Succow and Joseph W. Sharp, his assistant, for maintaining the light under hazardous and very trying conditions.

The lighthouse was automated in 1941, and stood empty for over a decade. Then, in 1952, the dwelling was razed to keep out unwelcome occupants. At that time, the lighthouse sat on an island, no longer attached to the peninsula. The Coast Guard abandoned the property in 1987, when the light was decommissioned. Without upkeep, the tower continued to deteriorate, and would have been doomed had the Lake Maurepas Society not taken interest in the lighthouse in 1995. The Manchac Lighthouse Committee, an offshoot of the society, was formed in 1999 to take responsibility for the structure. Click here to see a video of the lighthouse shot in 1996.

Ben Taylor served as president of the group and successfully led an effort to have the lighthouse transferred from the Coast Guard to the state. This move, transacted on December 28, 1999, allowed the committee to secure $230,000 of state funding for restoration of the lighthouse. Using that sum, coupled with $16,000 raised by the group, a two-phase restoration plan for the lighthouse was prepared. In phase one, the towers foundation was to be secured, and in phase two the tower would be jacked up, placed atop a new foundation, and relit. Phase one began in 2002, when wooden pilings were driven around the tower, to shore up its foundation and prevent it from toppling over. At that time, the lantern room was also removed from the tower for restoration, but unfortunately it broke in two during the process.

In April 2003, the lighthouse was over a thousand feet from the nearest shore. It is hard to imagine that just a hundred years earlier, Keeper Succow and his family maintained a garden and a small farm with chickens and cows next to the lighthouse.

Still armed with a significant sum of money, the lighthouse committee paused to rethink its plan for the tower. With the base of the tower submerged under several feet of water and given the towers pronounced lean, drastic measures would have been required to save it. Thoughts of moving the tower, which would compromise its historical status, were dismissed as the tower was listed on the National Register of Historic Places, but in retrospect, that would have likely been the only way to save it.

Seven years to the day after Hurricane Katrina struck New Orleans, slow-moving Hurricane Isaac soaked the Gulf Coast in August 2012 and caused Pass Manchac Lighthouse to topple into the waters of Lake Pontchartrain. The relighting of New Canal Lighthouse, which was destroyed by Hurricane Katrina, had to be postponed due to Hurricane Isaac. Given the difficult economic times at the time the tower collapsed, many believe Pass Manchac Lighthouse is likely gone forever.

The lantern room from Pass Manchac Lighthouse, now back in one piece, was placed on display on the grounds of the Lake Pontchartrain Basin Maritime Museum in Madisonville, Louisiana on February 15, 2008.

For a larger map of Pass Manchac Lighthouse, click the lighthouse in the above map.

Pass Manchac Lighthouse was destroyed in August 2012 by Hurricane Isaac, but its lantern room can be seen on the grounds of Lake Pontchartrain Basin Maritime Museum in Madisonville, Louisiana.


We were fortunate to have Ben Taylor, who is in charge of the Pass Manchac Lighthouse Committee, along for our boat trip out to the Pass Manchac Lighthouse. Before heading out to visit the light, we stopped by Taylors business to view the lantern room, which has been removed from the lighthouse as part of the restoration effort. As we pulled up in our rental car, they were just finishing the local springtime culinary staple of boiled crawfish. We were kindly offered a couple of specimens from the pile, and were instructed on the proper way to suck the head and squeeze the tail. Its always fun to get a sampling of the local cuisine and culture.