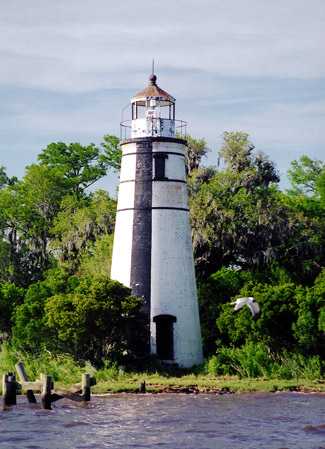 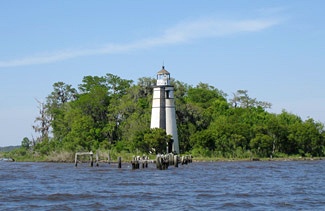 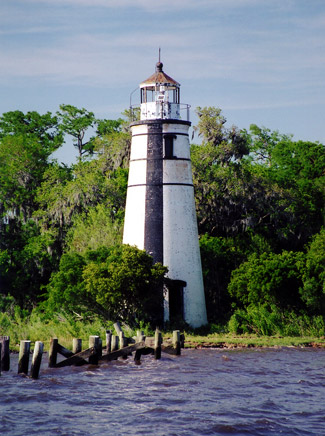 The Tchefuncte River is named after a Native American Tribe that inhabited the area from 600 B.C. to A.D. 200. In 1811, a small town established on the banks of the river was named Madisonville, in honor of President James Madison. Over the next century, the town flourished as a resort for the wealthy residents of New Orleans who fled the heat of the city for the cool lake breezes of Madisonville. The visitors were transported from Port Pontchartrain to the lakes northern shore by steam ferry. Additional boat traffic on the Tchefuncte River was produced by the Jahncke Shipyard. Fritz Jahncke, a German immigrant, used the abundant sand and clay found along the waterways of the lakes northern shore to start a cement and concrete business to help build the growing city of New Orleans. Jahnckes business prospered, and he eventually formed his own shipping line to transport his goods. Jahncke opened a shipyard in Madisonville to service his fleet, and the facility grew to the point where he was awarded contracts by the U.S. Government to build ships during World War I. The finished ships were floated on barges down the Tchefuncte River and out to the gulf.

On June 30, 1834, Congress appropriated $5,000 for a lighthouse to guide vessels across Lake Pontchartrain to the mouth of the Tchefuncte River, but this sum had to be re-appropriated on March 3, 1837 when the original funds reverted to the treasury due to difficulties obtaining title to the lighthouse site. Built in 1837, the thirty-six-foot-tall brick tower was equipped with a lighting apparatus supplied by Winslow Lewis that consisted of nine lamps backed by fourteen-inch reflectors. Benjamin Thurston was hired as the lights first keeper at an annual salary of $500 and was known for keeping pet alligators at the station. A 212-foot breakwater was built in 1854 to protect the lighthouse, and in 1857 a fifth-order Fresnel lens was installed in the lantern room.

The tower was badly damaged during the Civil War, and in 1867 workmen arrived to restore the station. The dwelling was first put in order so it could be occupied by the workmen, and then during the first week of June work began on rebuilding the lighthouse. Due to an outbreak of yellow fever, work had to be suspended for four weeks, but construction resumed in the latter part of September. The new tower was constructed on the original foundation using some of the brick from its predecessor and rose ten feet higher than the first. The lantern room from the destroyed Cat Island Lighthouse was used to cap the new lighthouse, and the light from a fifth-order Fresnel lens was exhibited on December 1, 1867. William A. Stewart, who served aboard the USS Richmond that was part of Farraguts fleet that bravely steamed past Fort Morgan and won the Battle of Mobile Bay, was employed as the first post-war keeper. A bell tower and keepers dwelling stood on the point next to the lighthouse.

Storm-tossed waters were a constant threat to the exposed station. A late gale in 1874 severely damaged the breakwater in front of the station, and Congress appropriated $3,500 on March 3, 1875 for a substantial new breakwater to be built that year. The breakwater served its purpose for a few years until a storm in September 1879 swept it away, forcing it to be rebuilt. The breakwater was rebuilt again in 1886 using cypress piles a foot square, faced with cypress sheet piling.

A storm on August 19 and 20, 1888 washed the stations outside kitchen from its foundation, damaging it beyond repair, and destroyed the woodshed and outhouses. The plank walk to the landing was also swept away along with the steps leading to the fog bell tower. A new kitchen, storehouse, and outhouses were built, and 223 feet of plank walk were placed around the dwelling and tower.

In 1903, a black, square, pyramidal structure, supported by piles and bearing a fixed white lens lantern light thirty-four feet above the water, was built in five feet of water 545 feet lakeward of Tchefuncte River Lighthouse. This light was activated on April 30, 1903 and served as a front range light to guide mariners to the mouth of the river. At some point, a single vertical black stripe was painted on the tower to help captains line up their approach to the river. A brick oil house was also added to the station in 1903 and several tons of rock were placed in the breakwater.

A hurricane struck the station in July 1915, when seventy-three-year-old Keeper Joseph P. Groux was in his twenty-sixth year of service at the lighthouse. The Secretary of Commerce commended Keeper Groux for maintaining the light under hazardous and trying conditions. Following the storm, the breakwater had to be rebuilt along with a new pyramidal structure for the front range light. This photograph shows some of the damage the keepers dwelling suffered during the storm.

Frederick A. Schrieber served as keeper from 1920 to 1935, living at the lighthouse with his wife Lilla and their seven children, three of whom were born during their time at Tchefuncte River Lighthouse. In 1925, a lighthouse inspector visited the station and noted that in order for the keeper to send his five children to school, it was necessary for him to pay 75¢ per day for their conveyance from the light station to Madisonville, La., a distance of more than three miles. The inspector recommended that the Lighthouse Service pay for this expense as it was cheaper than hiring a teacher at $30 a month to live at the lighthouse. A telephone was installed at the station in 1927, and Keeper Schrieber paid the monthly bill so his family could easily communicate with town.

Electricity arrived at the lighthouse in 1935, and William Still, the last keeper, left in 1939. Three years after the light was solarized in 1952, the keepers dwelling was sold and moved upstream to the town of Madisonville. Through the years, the structure served as the residence for a local doctor, as a boat yard office, and as a camp. In 2004, John Poole donated the cottage to the town, and it was relocated to the grounds of the Lake Pontchartrain Basin Maritime Museum, which is located on what was the site of the Jahncke Shipyard.

The town of Madisonville assumed ownership of the lighthouse from the Coast Guard in 1999, and a group of volunteers interested in renovating the lighthouse held its first meeting on March 18, 2003 in the museum. Hurricanes Katrina and Rita interrupted the original efforts, but restoration plans resumed in 2007 backed by a grant from the Institute of Museum and Library Services and the Southeastern Museum Conference, a gift from the Southeastern Louisiana University Development Fund, and contributions from private groups and individuals. On June 25, 2008, Phase 1 of the lighthouse restoration concluded with the exterior masonry being repaired, repointed, and painted, and the interior spiral staircase being repaired and painted. Work continued during the rest of 2008, and on August 8, the maritime museum hosted a fireworks display above the lighthouse to celebrate National Lighthouse Day and the substantial progress made in restoring Tchefuncte River Lighthouse.

Today, people still flock to the northern shore from New Orleans, but now they are primarily commuters, and the trip is much shorter thanks to the Lake Pontchartrain Causeway that crosses the lake. The first span of the Causeway opened to the public in 1956, and the second in 1969. Now, each weekday, 30,000 cars cross the lake on what is called the longest over-water bridge in the world. Hopefully, a good number of these residents will take an interest in preserving part of Lake Pontchartrains maritime history.

Located along the northern shore of Lake Pontchartrain, near the mouth of the Tchefuncte River, south of Madisonville.
Latitude: 30.37967, Longitude: -90.16914

For a larger map of Tchefuncte River Lighthouse, click the lighthouse in the above map.

Tchefuncte River Lighthouse is best viewed by boat. A distant view is possible by turning south on Main Street from Highway 22 in Madisonville and driving south for two miles to Lake Pontchartrain. The keepers dwelling, formerly located next to the lighthouse, is now on the grounds of Lake Pontchartrain Basin Maritime Museum.

The lighthouse is owned by the Town of Madisonville. Grounds/tower closed.


We took a boat out of Madisonville to see both the Tchefuncte River and Pass Manchac Lighthouses. Several locals came along for the ride, which enhanced our experience. Our captain had a rubber dinghy aboard in case we wanted to attempt a landing at Tchefuncte River Lighthouse. By the time we had finished visiting Pass Manchac Lighthouse, a pretty good chop had developed on the lake. I had internally decided that I did not want to try to go ashore at Tchefuncte River Lighthouse, however, the rubber raft had been provided, and I felt the locals wanted us to get the whole experience. Not being a skilled rower, I was a bit apprehensive of exactly how we would make it back to the boat, going against the cresting waves. Fully clothed with long pants and shoes, we boarded the small craft, and I clumsily rowed ashore. We stayed mostly dry except when we were forced to wade in the last several feet, after the boat bottomed out. Climbing the tower proved to be an adventure too. Partway up the tower, I encountered a snake on the stairs. I didnt know snakes knew how to climb stairs. The snake quickly made me the sole climber, and I continued upwards giving it as wide a berth as possible. Returning to the larger boat wasnt as difficult as I had feared. We just converted the oars to paddles, and managed to cut a pretty straight line back to the boat. With wet shoes, socks, pants, and an afternoon of fun memories, we thanked our captain and new friends.

Tchefuncte River Lighthouse appears in the 2008 movie The Curious Case of Benjamin Button.