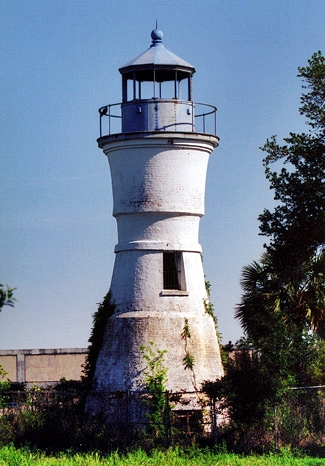 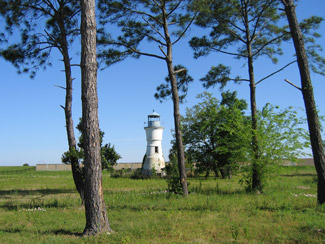 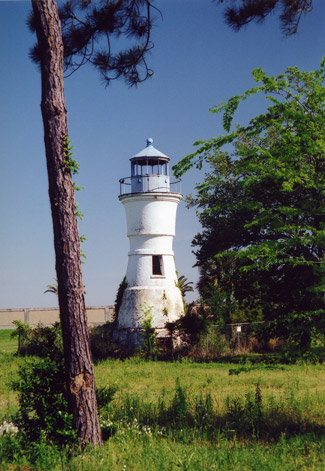 Redheaded Alexander Milne was born in Scotland where in his youth he was employed as a gardener at Gordon Castle. When he was ordered to cut his hair and wear the standard powdered wig of the time, he decided to head for the Land of the Free. Alexander eventually settled in New Orleans, where he became a successful businessman and purchased large tracts of land. On a section of his land, bordering the shores of Lake Pontchartrain, he established the settlement of Milneburg. Little remains of this once popular resort town save Milneburg Lighthouse, which is now better known as Port Pontchartrain Lighthouse. To attract visitors to Milneburg, a railroad was built connecting the town to the French Quarter. During the heat of the summer, residents of New Orleans could board the steam train nicknamed Smokey Mary and soon be cooling themselves in the lake. Port Pontchartrain, the lakes first artificial harbor, was also constructed at Milneburg and offered connections to the health resorts located on the lakes northern shore. A crude light, consisting of a square lantern raised between two poles to a height of fifty feet, was erected by the railroad company to serve as the ports first navigational aid.

In 1834, Congress allocated $5,000 for the construction of a light with a height of eighteen feet, but the railroad company preferred the higher focal plane of their light and suggested the government just take it over. Three years later, a larger sum was earmarked for a lighthouse, and this time an octagonal wooden tower, similar to those constructed nearby at Bayou St. John and New Canal, was built. From its base with a diameter of eighteen feet, the tower rose to a height of twenty-eight feet where a revolving chandelier created a flashing light, distinguishing it from the fixed lights at the two nearby ports. Ten lamps and fourteen-inch reflectors were affixed to the chandelier.

Benjamin J. Shane became the lighthouses first keeper on February 15, 1839. According to oral history passed down through his family, Keeper Shane died the following year after tripping over a bucket and falling down the lighthouse stairs.

By the early 1850s, the three octagonal lighthouses marking the ports along the southern shore of Lake Pontchartrain were in need of replacement. Danville Leadbetter, the lighthouse inspector for the Gulf of Mexico, wrote in 1853 that the three towers were wholly worthless and were being repaired only in the hope of making them serve till new ones can be built.

Congress appropriated $6,000 on August 3, 1854 for a new lighthouse at Port Pontchartrain to replace the old lighthouse that was beyond repair. Square dwellings perched just offshore on pilings and topped by a circular lantern room were built at the other two ports, but for some reason, Port Pontchartrain received a brick tower constructed 2,100 feet from shore on a concrete pad supported by pilings driven into the lake bottom. The lighthouse was completed in 1855 and equipped with a fifth-order Fresnel lens.

Port Pontchartrain Lighthouse was reportedly the only one on the Gulf Coast to retain its keeper throughout the Civil War. Before the war was over, the old abandoned octagonal tower described as a weather-boarded, eight-sided truncated pyramid of very ugly shape was dismantled and used to build a walkway over the lake to the railroad pier.

A hurricane in September 1869 carried away the stations kitchen, capsized the cistern, and destroyed the plank walk leading from the dwelling to the railroad wharf. The old frame dwelling rested on piles that were very rotten, and it was thought another storm of the same magnitude would sweep it away with its occupants. A new dwelling, kitchen, 3,000-gallon cistern, and a plank walk were built in 1871.

In 1880, the diameter of the top of the tower was increased to support a new lantern room. Additional brickwork flared out the top of the tower, raising its height by seven feet and giving it a unique dumbbell appearance. Just two years after the tower was extended, another change came to the station. Beginning in 1882, a string of three women keepers served at Port Pontchartrain Lighthouse, and their tenure lasted until the light was discontinued in 1929.

The middle keeper of this trio was Margaret R. Norvell. Margarets husband drowned in 1891, while serving as keeper of Head of Passes Lighthouse, and, with two small children two support, Margaret was appointed in his place. The sailors at sea became the men in Margarets life. She said, There isnt anything unusual in a woman keeping a light in her window to guide men folks home. I just happen to keep a bigger light than most women because I have got to see that so many men get safely home.

The Morning Tribune of June 26, 1932 carried the following about Margaret Norvell. In every big hurricane or storm here since 1891, her lighthouse has been a refuge for fishermen and others whose homes have been swept away. In the storm of 1903 Mrs. Norvells lighthouse was the only building left standing on the lower coast, and over 200 survivors found a welcome and shelter in her home. In 1914, Keeper Norvell brought a man to the lighthouse who had suddenly taken ill aboard the steamer Hanover and cared for him until his passing. Margaret transferred to New Canal Lighthouse in 1924 and served for eight more years, bringing her years of service to nearly forty-one. In 2013, the Coast Guard named its newest Fast Response Cutter in honor of Margaret Norvell.

Milneburg attracted several Jazz greats in the early 1900s, and continued to be a popular resort until the 1930s. At that time, the Levee Board implemented lakefront reclamation plans, and much of Milneburg was destroyed as the shoreline was reinforced. The lighthouse, however, survived, and in 1939, when the area was developed into Pontchartrain Beach Amusement Park, it served for some time as office space.

Pontchartrain Beach was just one gaudy display after another, recalled Bob Walker, a New Orleans radio personality, and the lighthouse just fit into the scenery. I suppose its big attraction was that it was not only right in front of Kiddieland and to the right of the Bali Hai Polynesian restaurant and bar, but directly across the midway from the legendary Beach Stage that hosted numerous shows through the years, from Elvis, the Big Bopper, circus acts, the Cartwrights live from Bonanza, and even live rock concerts from 1957 to 1964. Pontchartrain Beach was considered the souths largest thrill park during the 1970s, but other parks soon surpassed it, forcing it to close in 1983.

The land was dormant until 1991 when the University of New Orleans (UNO) acquired the property from the Orleans Levee District. The area is now part of the UNO Research and Technology Park and was slated to be incorporated into the grounds of a lakefront hotel. The lighthouse has lost some of its height to settling, but appears to be in good condition.

The lighthouse is located along the shore of Lake Pontchartrain on the grounds of the University of New Orleans Research and Technology Park.
Latitude: 30.03214, Longitude: -90.06221

For a larger map of Port Pontchartrain Lighthouse, click the lighthouse in the above map.

From New Orleans, take Interstate 10 East to Interstate 610 East (left exit). Continue on Interstate 610 East until the Elysian Fields Avenue exit. Turn left onto Elysian Fields. Continue north for about three miles to the traffic circle. Take the 2nd exit and you will see the lighthouse on your right between the two buildings as you U-turn left. You must check in with the guard at the gate. They do not mind pictures, but they have rules that you must follow.

The lighthouse is owned by the University of New Orleans. Grounds open, tower closed.


We parked alongside the road near the lighthouse, and then I walked into a grassy field to get a close-up picture. Just as I was preparing to take my first shot, a security vehicle arrived on the scene. The guard jumped out of his truck and started yelling, Sir, sir come out of there at once!. I clicked off one photograph, and then reluctantly obeyed. I had not seen any No Trespassing signs, so I was a bit surprised by the alarm evident in his voice. He soon explained that recently they had found five water moccasins near the lighthouse. (A water moccasin is a poisonous snake, not a Native American version of Tevas). I was a bit disappointed that a zoom lens would now be required to photograph the lighthouse, but at least I wouldnt have to seek medical attention.