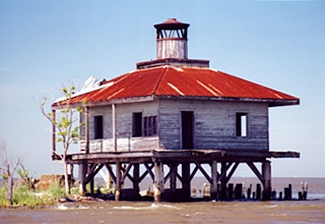 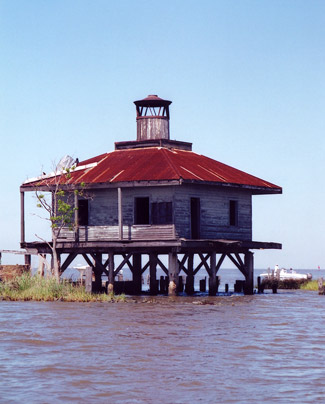 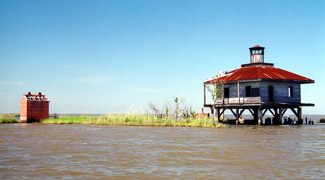 The Rigolets is a bayou that connects the eastern end of Lake Pontchartrain to Lake Borgne and the Mississippi Sound. Using this winding waterway, large ships could anchor off Chandeleur or Ship Island and transfer their cargo to smaller vessels capable of reaching the three New Orleans ports built on the south shore of Lake Pontchartrain: Port Pontchartrain, Bayou St. John, and New Canal. Early on, it was recognized that protecting this vital link from foreign invaders was crucial to the security of New Orleans. Accordingly, a wooden fort was built near the western extreme of the Rigolets. Named Petite Coquilles, the fort was manned during the War of 1812, but did not witness extensive action. The success of the British elsewhere during the war demonstrated that the U.S. coastal defenses were inadequate. This deficiency prompted President Monroe to direct the erection of numerous fortifications following the war to protect the nations strategic ports. One of these new forts was Fort Pike, constructed of red brick, which replaced the wooden fort on the Rigolets.

In 1855, the recently created Lighthouse Board built three new matching lighthouses for the three New Orleans ports on Lake Pontchartrain. That same year, a lighthouse based on the same design was built to mark the entrance to the Rigolets from Lake Pontchartrain using a $5,000 appropriation made by Congress on August 3, 1854. Called West Rigolets Lighthouse, the structure consisted of a square dwelling with a hipped roof surmounted by a circular lantern room. James Cain was hired to serve as the lights first keeper.

The lighthouse was active until July 6, 1861, when it was darkened due to the Civil War, which was being contested nearby. Union forces eventually gained control of the area, and the lighthouse was reactivated in November 1862, with a ships lantern being used as the light. Apparently hostilities in the area had not been fully suppressed, as keeper Thomas Harrison was found shot on the lighthouse wharf, just two days after the light returned to service. Harrison was the only keeper killed during the War Between the States, and the party responsible for the shooting was never determined.

A fifth-order Fresnel lens was returned to the lantern room in 1863, when the station was completely overhauled. John M. Read was appointed keeper and served for thirty-five years. In 1864, Captain Williams was sailing a lighthouse tender from Pass a lOutre to West Rigolets Lighthouse, loaded with supplies for repairing that station, when the tender was captured in Chandeleur Sound by a Rebel launch manned by twenty-two men. After stripping the tender of its sails, rigging, and all of the cargo they could carry, the Rebels set fire to the tender.

A gale in early September 1869 damaged a breakwater that ran along the bank of the Bayou Rigolet and in front of the lighthouse, and almost entirely destroyed the stations wharf and plank walk. The cistern, which held water for the keeper and his family, settled down as a result of the storm and leaned into the west side of the lighthouse. Minor repairs were made to keep the station in working order until the following work was finished in 1888:

The breakwater was rebuilt, making it 268 feet long and 6 feet high, by driving in the breakwater fourteen piles, each 10 inches square and 15 feet long, and fourteen creosoted piles, each measuring 16 inches at the butt and 15 feet long, with stringers 6 inches square, bolted to each pile with screw bolts at the top and bottom of the piles. The breakwater was sheathed by driving sixty pieces of creosoted piling, 3 inches thick, 12 inches wide, and 15 feet long. A wharf was built, 18 feet by 21 feet in plan, in front of the station on creosoted piles, and a plank walk 54 feet long was laid from the tower to the wharf. New foundations were put under the cisterns and many minor repairs were made. All the new work was painted and the sills and foundations under the dwelling and cisterns were whitewashed.

Anna Read took charge of West Rigolets Lighthouse in 1897, following the death of her husband. During her tenure, the lighthouse received substantial damage from two hurricanes, and it was further threatened by the encroachment of the muddy water of the Rigolets. A significant hurricane struck the station in 1915, when Thomas Zettwoch was in charge of the lighthouse, and inflicted significant damaged as seen in these two photographs: 1 and 2. The following year, the lighthouse was raised six feet and placed on a new foundation of concrete pilings, and the outbuildings, wharf, walkways, and bulkhead were all repaired.

On July 25, 1922, Keeper Charles W. Heartt rescued two people from drowning after a tarpon jumped into their boat, causing the vessel to overturn and dumping them into the water.

West Rigolets Lighthouse was abandoned in 1945, when an automated electric light was established nearby. The structure was subsequently sold to a private owner, Mike Vujnovich, for the sum of $2,500. When Vujnovich passed away in 1960, the lighthouse was left to his three nephews. Anton Zanki obtained sole control of the lighthouse after he bought out the other two nephews. Zankis son expressed interest in restoring the lighthouse, but no work had started as of April 2003. Besides the lighthouse itself, a brick oil house, built in 1910, and two large circular brick supports that once held the stations wooden cisterns remained standing in 2003.

The lighthouse was located just over a half mile northwest of Fort Pike. These two historic neighbors were a reminder of the important role the Rigolets played in New Orleans commerce and defense, but now just one remains to tell its story.

Formerly located at the eastern end of Lake Pontchartrain, where it meets The Rigolets, 0.6 miles northwest of Fort Pike Historic Park and the Highway 90 bridge.
Latitude: 30.17465, Longitude: -89.74307

For a larger map of West Rigolets Lighthouse, click the lighthouse in the above map.

West Rigolets Lighthouse was destroyed by Hurricane Katrina in 2005. A distant view of the lighthouse site is possible by looking northwest while crossing the Highway 90 bridge over the Rigolets.


The parking lot at Fort Pike is shared with a boat ramp. We decided we would try to ask a boater for a ride out to West Rigolets Lighthouse. While waiting for an unsuspecting boat captain, we briefly toured the historic fort. From the top of the fort, we saw a boat approaching so hurried back to the ramp, only to see the boat continue on into Lake St. Catherine. Tired of waiting, we drove down the road a bit, and stopped at a nearby grouping of homes and crab fisheries. We inquired if anyone would be interested in taking us out to the lighthouse, and quickly found a willing boat owner. After launching the boat, we were soon out at that lighthouse, which seems to be a popular fishing spot. We were very impressed by the friendliness of our impromptu guide, and on leaving were given a refrigerator magnet for Pomes Seafood, just in case we wanted to have some of their fresh crab shipped to us. Their number is (504) 662-5026, if you are ever looking for some fresh crab.