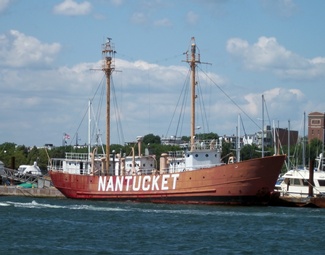 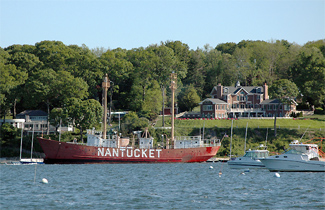 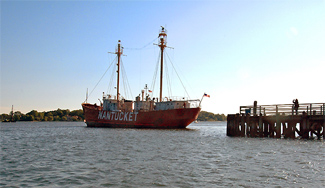 Established in 1854, Nantucket Shoals Lightship Station was originally known as Nantucket New South Shoal Station, before the name was changed in 1896. The exact position of the lightship, whose purpose was to mark the southern extremity of the shoals that extend south and east from Nantucket Island, varied through the years to provide a greater safety margin from the shoals or to better serve shipping lanes. Regardless of its precise location, Nantucket Lightship was certainly the most exposed lightship station in the United States, being from twenty to fifty miles from the nearest land.

Twelve lightships served on Nantucket Shoals over the years  including LV 85, which marked the station from 1907 to 1923, and LV 106, which was anchored there from 1923 to 1931. The last three lightships stationed on Nantucket Shoals, LV 112, WLV 612, and WLV 613, still have NANTUCKET painted in large white letters on their red hulls. Of the fewer than twenty U.S. lightships that remain, the three Nantucket lightships are the only ones to share the same station marking. This isnt too surprising as Nantucket Shoals Lightship Station had been the only remaining lightship station in the country for four years when it was replaced by a navigational buoy in 1983.

Nantucket Lightship was an important aid for vessels making transatlantic crossings and was seen by passengers approaching the coast of the United States long before they saw the Statue of Liberty. In 1934, LV 117 was anchored at the station, when during heavy fog on January 6 it was sideswiped by the SS Washington and received minor damage to its hull plates. Just a few months later, the White Star Lines SS Olympic, sister ship of the Titanic, was making sixteen knots through patchy fog on May 15, when it sighted Nantucket Lightship lying across its course less than two ships lengths ahead. Unable to avoid a collision, the massive ocean liner plowed into the lightship, sending her to the bottom along with four of her eleven-man crew.

The Olympic pulled seven crewmembers from the frigid waters, but three of these men soon succumbed to injuries and exposure, and a fourth, Captain George Braithwaite, survived for just a few months. In 1998, Quest Marine Services recovered the 1,200-pound signal bell from LV 117 during a diving operation in thirty fathoms of water. Some likened the operation to grave robbery, but the company countered that the bell and other artifacts recovered from the lightship would be part of a traveling exhibit to honor the men that served aboard the vessel. In 2004, the Coast Guard launched an investigation into the recovery of the artifacts and subsequently filed a lawsuit against the divers, who rather than face prosecution turned the items over to the Coast Guard and promised to not dive on the site again.

As reparation for the sinking of LV 117, the British Government paid $500,000, of which $300,956 was used for the construction of a replacement lightship by Pusey & Jones at Wilmington, Delaware in 1936. With a length of 14810 and a displacement of 1050 tons, this lightship, LV 112, was the largest lightship ever built in the United States. The vessel was built with heavy reinforcement and a high degree of compartmentalization in order to prevent a repetition of the tragedy that befell LV 117. For propulsion to and from its station, the vessel was equipped with an unusually powerful steam engine, which also provided for the heating of the vessel. Diesel power was employed for LV 112s radiobeacon, compressed-air fog signal, powerful masthead light, and submarine signal. When first placed on station, LV 112 was declared perhaps the most important aid to navigation in the Lighthouse Service.

LV 112 served at Nantucket Shoals from 1936 until 1942, when she was withdrawn from the station, painted gray, outfitted with a 20mm gun, and assigned to serve as an examination vessel at the entrance to the harbor at Portland, Maine for the duration of World War II. During the war, LV 112 was outfitted with Radar, which allowed her to detect approaching ships at a distance of eight miles. The lightship returned to her former station when the war ended in 1945 and served there for the next thirty years, save two years spent as a Relief lightship. When vessels came within half a mile of the lightship, the general alarm was sounded, and everyone donned life jackets and went out on deck so they would at least have a swimmers chance of surviving a collision.

Richard Arnold served two years aboard Nantucket Lightship. That was a miserable station, he recalls. The tide runs terrible and you have certain winds out there, put you in the trough. She gets in that tide, and youd be in the trough  oh my God, the rocking and a-rolling. On bad sea days, crewmen would wear coffee cans tied about their necks into which they could vomit while they continued working.

While the work was at times dull and tiresome, there were moments of surreal magic. Colorful tropical fish, transported north in the warm Gulf Stream waters, were occasionally spotted near the lightship, and then there were the passing ocean liners. The captain of the Queen Mary would light up all the ships lights, and Id light up all the lights on the lightship, remembers Peter Brunk, who served as captain of LV 112 from 1970 to 1971. And theyd pass by  300, 400 yards away  and you could hear the captain saying, This is the first sighting of America. 

LV 112 was twice assaulted by hurricanes while on station. The first was Hurricane Edna that packed 110 mph winds and stirred up seventy-foot seas when it struck the lightship on September 14, 1954. Bow plates were smashed, the anchor chain was parted, the rudder was torn off, porthole windows were blown in, and the pilot house was severely damaged. Only a jury-rigged anchor, which held the bow into the seas, prevented further destruction. A hurricane in 1959 caused the anchor chain to part again, and when the buoy tender Hornbeam located the lightship, she was eighty miles off station. LV 112s career came to an end in 1975, when WLV 612 replaced it on March 21, and it was formally decommissioned a week later.

Atlantic City, New Jersey purchased LV 112 at a government surplus auction shortly after its decommissioning, but when residents of Nantucket Island learned that their lightship was going to leave the state, they sprang into action. Led by Captain Mike Todd, a Nantucket selectman, a group of twelve men, known as The Dirty Dozen, agreed to deliver a second surplus lightship to New Jersey, in exchange for title to LV 112. After seeing the lightship to New Jersey, the men flew home to Nantucket and in early December 1975, they sailed LV 112 from Boston to the island, where the Nantucket Historical Association operated it as a museum. After roughly a decade at the island, the lightship gradually fell into disrepair and was sold to Nantucket Lightship Preservation, Inc., a nonprofit New York group in 1985.

Under this organization, the lightship traveled to various ports on educational tours before eventually finding a semi-permanent home as a floating museum in Portland, Maine. Nantucket Lightship Preservation wanted to sell the vessel to the support group in Portland in 1989, but a clause in their 1985 purchase agreement with Nantucket stipulated that island residents had the right to buy the lightship back for $1 if it came back on the market. Island resident William K. Murphy tried for weeks to round up support for bringing the lightship back to Nantucket, but with time running out, he paid the $1 by the August 30 deadline and took control of the lightship.

An industrial researcher in applied physics, Murphy was painting houses on Nantucket for $15 an hour at the time of his purchase, but had hopes of using the lightship for maritime education or oceanographic research. The reality and expense of maintaining such a large vessel, however, didnt take long to sink in. The owner of Straight Wharf, where the Nantucket Lightship had been docked earlier at Nantucket, refused to let the vessel use his facility, the only one on the island capable of berthing the lightship, and Murphy was forced to take the lightship to Rhode Island. In March 1990, just a few months after assuming ownership of LV 112, Murphy agreed to let the vessel return to Portland under control of a group called Lightship Nantucket, Inc., who paid off some of Murphys debt as part of the deal.

In 1998, the former U.S. Lighthouse Service Depot on Staten Island was selected as the home for the National Lighthouse Museum, and in 2002, the museum, though still in the planning stages, acquired LV 112 from the H.M.S. Rose Foundation for $1. The lightship was docked at the depots pier for a few months before being towed to Oyster Bay in the fall of 2003 so that volunteers, who had completed restoration of a historic oyster sloop, could apply their skills to the lightship. Though slated to remain in Oyster Bay for just a short time, the lightship was still tied up at the pier there in 2009, as the effort to open the National Lighthouse Museum had all but fallen apart.

The National Lighthouse Museum offered to sell the lightship for $1 to a qualified support group, but finding an organization with the backing to restore and maintain the historic vessel was not easy. The United States Lightship Museum was formed in August 2008 to raise funds to take over the lightship and return her to Massachusetts, and on October 20, 2009, Jerry Roberts, a board member of the National Lighthouse Museum, and Robert Mannino Jr., head of the U.S. Lightship Museum group, signed transfer papers for the lightship. The group has raised roughly $200,000 and sailed the lightship back to Boston Harbor on May 11, 2010, where it was opened to the public starting in 2012 at Boston Harbor Shipyard and Marina.

In 2014, American Express awarded a $250,000 grant as part of the National Treasures program to the lightship, which was designated a National Treasure by the National Trust for Historic Preservation in 2012. The money will be used to rebuild the vessels navigational light beacon, foghorn and on-board electrical systems, allowing it to shine for the first time in forty years.

In August 2020, Lightship Nantucket was moved from East Boston to the Fitzgerald Shipyard in Chelsea where a $1 million major restoration of the vessel was carried out over the next seven months. The eighty-four-year-old steel hull frames were replaced and other maintenance work was performed.

For a larger map of Lightship Nantucket LV 112/WAL 534 Lighthouse, click the lighthouse in the above map.

The lightship is owned by the United States Lightship Museum.