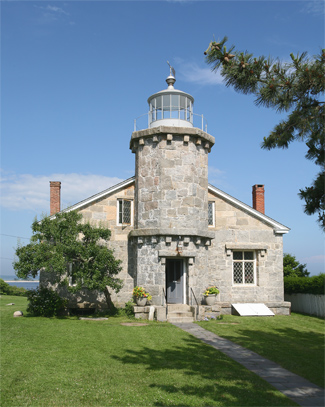 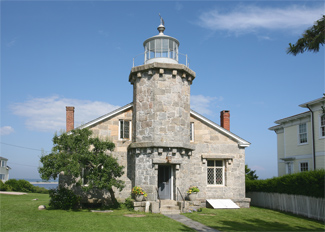 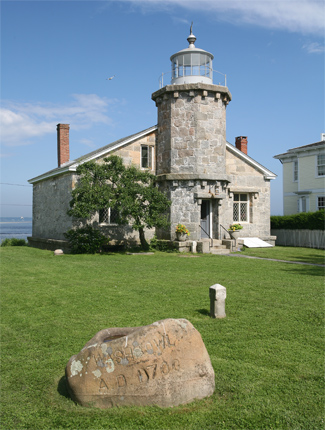 The Borough of Stonington in the southeast corner of Connecticut is a beautiful historic village, with a number of well-preserved houses and other structures dating from the fishing and whaling days of the eighteenth and nineteenth century. First settled in the seventeenth century, the town had one of its most storied events in 1814, when the badly outnumbered and outgunned townspeople managed to repel an attack by five British warships commanded by Commodore Thomas Hardy. The town was a thriving port, dominated by fishing, whaling, and shipbuilding, and the first U.S. ships involved in sealing in the Antarctic were based in Stonington.

Responding to increasing ship traffic, Congress allocated funds in 1822 for a lighthouse at the southernmost point of land in Stonington to mark the harbor entrance. Benjamin Chase won the contract for construction of the station, and the thirty-foot cylindrical stone tower and detached stone keepers dwelling were finished in 1823 at a cost of roughly $3,000. Originally, ten whale oil lamps set in thirteen-inch reflectors and arranged in an arc were used to cast a stream of light out to sea. On a clear night, the light was visible for over twelve miles. During the day, the tower was used as a guiding reference point for sailors entering the harbor, in tandem with the highest steeple in town.

The first Stonington Harbor Lighthouse had a short life due to the quick erosion of the beach in front of the tower. By the late 1830s, there was significant danger of the lighthouse being swept into the sea, as the tower stood just thirty feet from the nearest bank and twenty-two feet of ground had been lost since the light was established. At first, construction of a protective wall was considered, but it was realized that a wall would only be a temporary solution. In addition, the preventive measure would cost roughly the same amount as a new lighthouse, so plans for a new structure positioned farther up the peninsula were prepared.

Using stones from the old tower, a new one-and-a-half-story keepers dwelling was built with a thirty-five-foot octagonal tower centered on the front gable end. John Bishop of New Long built the new lighthouse under contract for $2,840, but the cost of the new site and a new lantern brought the total expense to about $6,500. The 1840 Stonington Harbor Lighthouse is an example of the diversity in design that characterized lighthouses built before the Civil War. The new station showed a fixed white light produced by eight lamps with sixteen-inch reflectors, shining from sixty-two feet above sea level.

The first keeper of Stonington Harbor Lighthouse was William Potter, a captain of the militiamen who fought off the British in the War of 1812, who kept the position from 1823 until his death in 1842. If a keeper had been married, the custom in those days was to offer the vacant position first to the keepers widow. Potters wife Patty accepted the appointment, but a few years later an inspector found that she kept the most filthy house he had ever visited; everything appeared to have been neglected. Things must have improved somewhat, as widow Potter remained keeper until 1854. One year later, a sixth-order Fresnel lens replaced the array of lamps and reflectors in the lantern room.

Following the construction of a breakwater at the entrance to Stonington Harbor, a privately built and maintained light and fog signal were installed at the breakwaters east end. After it became apparent to local mariners that this beacon was much more effective than the governments lighthouse, the Lighthouse Board submitted the following request in 1888 for funds to place an official light on the breakwater.

In consequence of the completion of the breakwater at the entrance of this harbor, the present light has ceased to be of any practical use as an aid to navigation. For some time past the Stonington and Providence Steamboat Company has maintained, at its own expense, a private light and fog-signal on the eastern end of this breakwater. The Board therefore came to the conclusion that a public light and fog-signal should be established here, and it estimated the cost for doing this at $8,000When this is done the present light will be discontinued.

In 1889, a new twenty-five-foot-tall, conical, iron tower rising from an octagonal base was completed on the breakwater and commenced operation on November first of that year with a fourth-order lens showing a fixed red light. Stonington Harbor Lighthouse was deactivated at that time, and the keeper was reassigned to care for the breakwater light. Keeper Benjamin Pendleton continued to live at the old stations quarters, although a small shack was built on the breakwater wall, where he stayed when necessary. A fog bell was suspended from the new breakwater tower to help mariners during periods of limited visibility, and in 1890, just a few months after it was placed in operation, its weight box was lengthened seven feet by cutting a hole into the stone pier to allow more time between rewinding of the striking mechanism.

Keeper Pendleton might not have liked tending the breakwater light, as in April 1890, just five months after it was placed in operation, George W. Beckwith was transferred from Penfield Reef Lighthouse to Stonington. Keeper Beckwith was a Civil War veteran and had spent sixteen months in Greenland among the Eskimos for his health before joining the Lighthouse Service.

On December 7, 1901, the Secretary of the Treasury sent the following to the Speaker of the House of Representatives, seeking $6,000 for a new dwelling to replace the old stone lighthouse at Stonington:

This Department has the honor to state at the instance of the Light-House Board that a recent inspection of the Stonington Breakwater, Connecticut, light-station has shown that its keeper's dwelling is in a condition so unhealthful as to menace the lives of its occupants, there having been more or less sickness in every family residing therein during the past twenty years. The house is very old, no work has been done on it for a long time, it is past economical repair, and it is in such a condition of deterioration as to make it almost uninhabitable.

A frame house was finally built for the keeper just south of the old Stonington Lighthouse in 1908, after Congress provided $6,000 on June 30, 1906. Part of this dwelling is still visible today in the western portion of the renovated house next to the lighthouse. In 1926, the breakwater light was taken down and replaced with a skeletal tower.

Joseph J. Fuller, who replaced Beckwith as keeper in 1899, was formerly a whaling and sealing captain who sailed out of New London. His specialty became hunting sea elephants for oil on the Kergulen Islands in the southern Indian Ocean. Fuller wrecked on the remote islands in 1880 and spent a year there with his crew before being rescued.

In 1925, Stonington Harbor Lighthouse was offered for sale by the government. The winning and only bid came from the Stonington Historical Society, who refurbished the structure and opened it to the public as a museum. The Old Lighthouse Museum still operates today, and although it is open seasonally, it is the only lighthouse on the Connecticut mainland that is regularly open to the public. The lighthouse has been well maintained by volunteers over the decades, and now boasts six rooms of diverse exhibits that include nautical tools, items brought from China for trade, early local pottery, and military items relating to the Battle of Stonington during the War of 1812. A fourth-order Fresnel lens is on display upstairs, while in one of the downstairs rooms a section of epoxy flooring allows guests to gaze down into the stations old cistern and well. Visitors may also climb the granite steps in the tower to be treated to a nice view of the surrounding area. If you look off to the southwest, you may get a distant view of Latimer Reef Lighthouse.

In 2017, after four years of revisions and negotiations, the Stonington planning and zoning commission unanimously approved a 500-square-foot addition to the lighthouse that will serve as a new, handicap-accessible entrance to the museum.

For a larger map of Stonington Harbor Lighthouse, click the lighthouse in the above map.

From Interstate 95, take Exit 91 and proceed south on Route 234 (Pequot Trial) for 0.4 miles to North Main Street. Turn left on North Main and continue 1.5 miles to the light at the intersection with US Route 1. Cross Route 1 and continue straight to the first stop sign. Turn left and then take the next right and continue over the railroad bridge onto Water Street. Follow Water Street through historic Stonington Village to its end. Park at the point and walk back to the lighthouse.

The lighthouse is owned by the Stonington Historical Society. Grounds open, dwelling/tower open in season.


Stonington Harbor Lighthouse appears in the 2012 movie "Hope Springs," starring Meryl Streep and Tommy Lee Jones. Probably not a movie you want to watch with your children.