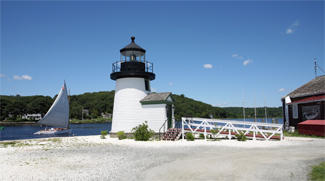 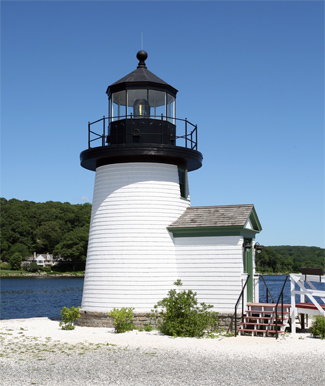 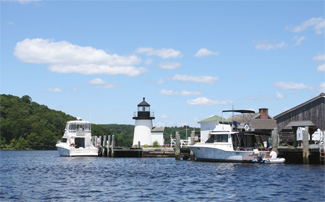 The Connecticut coast has many small inlets and harbors, and such historic towns as Mystic, New London, Groton, and Stonington were havens for classic tall sailing ships during the 18th and 19th centuries. Today, the town of Mystic has taken the lead in restoring and exhibiting its old maritime history, especially at a hugely popular site along its waterfront, the Mystic Seaport Museum. Besides a number of tall, wooden sailing and whaling ships from the 19th and early 20th centuries, the museum has exhibits about rope making, boatbuilding, barrel making, and anything else related to a working maritime community of that time. There is also a gift shop, planetarium, and art gallery. The town of Mystic itself has many small shops and, of course, Mystic Pizza.

The small wooden lighthouse at the westernmost point of the Seaport, two miles upriver from Noank, was constructed in 1966 but has never been an official aid to navigation. Rather, it is a replica of the current Brant Point Lighthouse in Nantucket that was built in 1901. The Brant Point Light Station was the second to be built in New England, but numerous towers have stood on or near the point over the years.

Mystic Seaport's replica does have a genuine piece of lighthouse history - a working fourth-order Fresnel lens in its lantern room on loan from the Coast Guard.

For years, the interior of the Mystic Seaport's lighthouse was closed to the public, until in July of 2008, an exhibit called Sentinels of the Sea was opened inside the tower. This multimedia exhibition recounts the history and diversity of American lighthouses through two short films, The Heyday of Lighthouses and How to Look at a Lighthouse, which are shown on a grouping of five LCD screens.

You can get a brief look at the exhibit through the following short video:

For a larger map of Mystic Seaport (Replica) Lighthouse, click the lighthouse in the above map.

To reach Mystic Seaport, take Exit 90 from Interstate 95 and proceed south on Route 27 for roughly a mile. Mystic Seaport South Parking is the second lot on your left, opposite the main entrance Visitor Center.

The lighthouse is owned by Mystic Seaport. Grounds/tower open.


We spent part of a day at Mystic Seaport in July of 2009, after Sentinels of the Seas was opened inside the lighthouse. That was our first visit to the museum, which is definitely a worthy stop for anyone interested in lighthouses and maritime history. A historic lifesaving station is located on the grounds, and you can visit a working shipyard, go aboard several restored vessels, and even get out on the water. Be sure and take the free shuttle that runs between the northern and southern sections of the seaport for a good view of the lighthouse from the water.