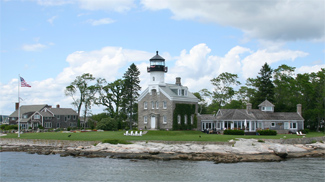 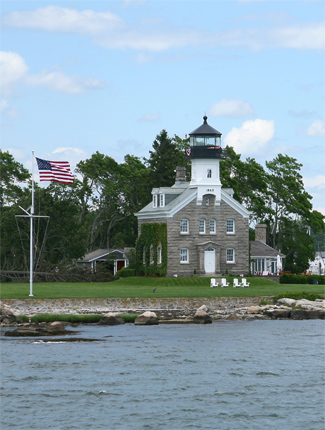 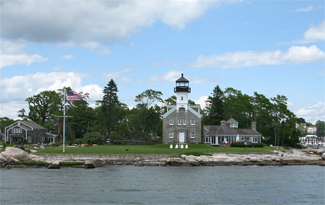 Morgan Point derives its name from Deacon James Morgan, who in 1712 gained ownership of the southern tip of the peninsula on the west side of the mouth of the Mystic River. Morgans descendants were mariners and shipbuilders, and it was Morgans great-great-grandson, Roswell Avery Morgan, owner of the local boat shop, who sold the property to the federal government in 1831 to build a lighthouse. A twenty-five-foot granite tower and a separate stone keepers house with six rooms were finished that same year.

A veteran of the War of 1812 named Ezra Daboll was the first keeper of Morgan Point Lighthouse, and when he died in 1838, his wife Eliza was appointed the new keeper. With six children to look after as well as the light, Eliza had her hands full. Her oldest daughter helped out with some chores, and legend has it that sailors often heard her singing loudly during storms to keep her courage up. In a report written in 1838, Lt. Bache noted the establishment is kept in great neatness by the widow of the former keeper.

The rest of Baches report for 1838 follows:

Morgan's-point light, (stationary,) at the entrance to the river Mystic, bears nearly west from Stonington light, distant four miles. It was established for the benefit of the trade in its immediate neighborhood, in the year 1831. The tower from which it is shown is 25 feet in height, and is built of stone, having a stairway of wood in the interior. The lantern contains ten lamps, with reflectors, which illuminate nearly three-fourths of a circle from the W. N. W. to the N. E. by N. point. The lamps are out of order; each reflector is attached to its lamp by a single hook, and is moveable in every direction. A piece of wood is inserted between each lamp and its reflector, below the hook, by which the axes of the reflectors are elevated above the horizontal line; by this arrangement, the brightest portion of the reflected light is thrown away.

The reflectors are thirteen inches in diameter, and weigh from two pounds twelve ounces to three pounds; the silver is rubbed from their concave surfaces in many places. Three good opportunities were afforded me for observing the effect of this light: once, while at anchor near the South Dumpling, distant from Morgan's point two and a half miles; the weather hazy, the light was scarcely discernible. Stonington and New London lights, although at a greater distance, appeared with greater brightness than the light in question. At a distance of seven miles, it was not visible on the nights of the 5th of September and 5th of October, the weather being clear. The dwelling-house is of stone; it contains six rooms, and is in a good state of repair.

An 1850 inspection of the lighthouse noted: Everything about the dwelling is nice and clean; but not so with the lighting apparatus, for that, as a general thing, is not near so clean as it ought to be. Eliza Daboll remained keeper of the light until she passed away in 1854 and was replaced by Silas Spencer.

Complaints that the array of ten lamps in the lantern room of Morgan Point Lighthouse were too dim, led to the installation of a sixth-order lens in 1855.

One other female keeper served at Morgan Point, Francis McDonald, who like Eliza Daboll, assumed responsibility for the light upon her husbands death. Mrs. McDonald served from 1869 to 1871, when keeper duties were passed to her brother, Thaddeus Pecor. Pecor, a Civil War veteran, was one of the longest-serving keepers in the region, finally ending his forty-eight years of service with his retirement in 1919 at seventy-five years of age.

The first lighthouse was replaced during 1867  1868. The new two-and-a-half-story granite structure had eight rooms and an add-on kitchen, and featured an octagonal iron lantern atop the seaward-facing end of its pitched, slate roof. The following lighthouses of similar design were also erected on Long Island Sound between 1867 and 1869: Great Captain Island and Sheffield Island in Connecticut, Old Field Point and Plum Island in New York, and Block Island North in Rhode Island.

No longer needed, the old dwelling on Morgan Point was torn down, its cellar filled, and the grounds above graded. Its wooden addition, however, was saved and relocated to the southern boundary of the grounds to serve as a stable. As recently as the late 1960s, the remains of the original towers foundations could still be seen at low water.

The station ended active service in 1921, having been replaced with an automatic beacon positioned on Crooks Ledge in the channel east of the site. The following advertisement alerted the public of the pending sale of the lighthouse: Sealed proposals will be opened by the Superintendent of Lighthouses, Staten Island, N.Y., until 2 P.M., Feb. 15, 1922, for sale of Morgan Point Lighthouse Reservation at entrance to Mystic River, Noank, Conn. Area about two acres. The lighthouse property was sold at auction to one Henry M. Hewitt for $8,625 in 1922, and sometime later, the lantern room was removed, although there are conflicting reports on who did it and where it went. Some say it was taken for use in another lighthouse, although other sources claim it was destroyed in the great New England hurricane of 1938. In any case, local residents reportedly took refuge inside the base of the tower during the hurricane, believing correctly that it was one of the safest places to be during a storm.

Woodruff and Kay Johnson of New York City used the lighthouse as a summer residence for over two decades. In 1991, Jason Pilalas, a Connecticut native but then a partner in a California investment firm, became the third private owner after seeing an ad for the lighthouse in the Wall Street Journal and then acquiring it for $1.29 million. I had harbored the dream for 40 years of living in the lighthouse on Captains Island off Greenwich, knowing I never could, says Jason. When I found its exact twin, we were going to own it, thats all there was to it.

One of Pilalas first priorities was to reconstruct the lantern room. Working with an architect and using old U.S. Lighthouse Service plans, a new oversized lantern was made out of aluminum by a company in Rhode Island and is rumored to have cost around $35,000. As the lighthouse had a leaky roof and its wood was rotten, the entire inside had to be gutted and remodeled to make comfortable living quarters. The first floor of the lighthouse is now an open family room filled with nautical artifacts. A foyer links the lighthouse to a cedar-shingled addition, which gives the residence a total of five bedrooms and three bathrooms. As a private residence, the lighthouse and the surrounding grounds are now closed to the public, although the structure is well-kept and remains an important visual landmark for maritime traffic coming into Mystic Harbor.

For a larger map of Morgan Point Lighthouse, click the lighthouse in the above map.

The lighthouse is a private residence and is best viewed from the water. Boat trips offered by nearby Mystic Seaport may pass by the lighthouse. Cross Sound Ferry offers cruises that pass by Morgan Point Lighthouse.