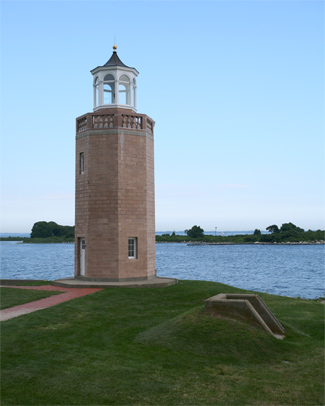 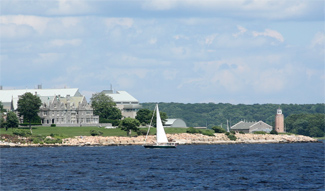 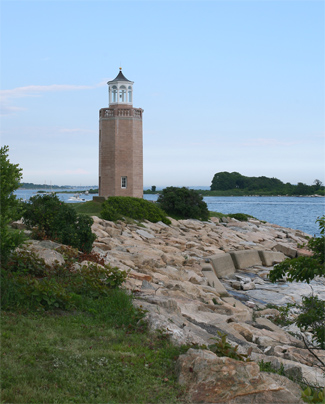 Avery Point Lighthouse had a very brief life compared to other lights in the area, being only active as a navigational aid from 1944 to 1967, and it never had a resident keeper. But its unique design makes it a favorite among lighthouse aficionados, although only the dedicated efforts of a group called the Avery Point Lighthouse Society (APLS) saved this structure from almost certain oblivion.

The lighthouse is located on shore at Avery Point, at the east side of the Thames River entrance in Groton, Connecticut. Avery Point was originally named for an early settler in the area named Captain James Avery. For a long time, the seventy-three-acre site served as the huge estate of a wealthy industrialist named Morton F. Plant. Plant died in 1918, and in 1942 the land was sold to the State of Connecticut, which in turn handed it over to the Coast Guard. From 1942 to 1967, it was the site of the United States Coast Guard Training Center.

Avery Point Lighthouse was the last to be built in Connecticut. It was finished in 1943, during World War II, but was not activated until May 2, 1944 due to concerns about possible enemy invasions by sea. The towers unusual lighting apparatus consisted of eight 200-watt bulbs showing a fixed white light at fifty-five feet above sea level. Later on, the light was changed to flashing green.

In 1969, the land was returned to the State of Connecticut at no cost, and it became part of the University of Connecticut at Avery Point campus. Given the designation of Building #41 by the university, the former lighthouse building has been used as a physics laboratory and an air sampling station.

By the late 1990s, the condition of the tower had deteriorated to the point where it was considered unsafe. Word got out to local residents, and APLS was formed to save the lighthouse. A petition drive gathered the signatures of over 19,000 people demanding the restoration and relighting of Avery Point Lighthouse. The University of Connecticut signed an agreement allowing APLS to work on the lighthouse. Funding came from a variety of sources, including the sale of over 2,000 personalized bricks to individual donors, to be part of a landscaped walkway around the base of the tower.

The towers concrete blocks were found to be crumbling, the result of high sand content, and were the first things to be replaced. The original lantern was lifted by crane and transported to West Mystic Wooden Boat Building Company, which is owned by a former lighthouse keeper and a then English professor at the University of Connecticut. The company graciously donated its time and materials for the restoration project. The old wooden lantern was used as a template for the construction of the new replica lantern, which was lowered into place on September 30, 2005 as about fifty cheering spectators looked on.

Extensive restoration and refurbishing continued during 2004 and 2005 under the auspices of APLS. Thirty-two marble balusters originally imported from Italy were removed, cleaned and repaired by masons, and then put back into place. Meanwhile, the interior had to be completely gutted and cleaned, with new electrical wiring, custom-made doors and windows, and fresh paint and other structural and cosmetic work applied. Local craftspeople and merchants donated many of the goods and services necessary to make the restoration complete.

After six years of work and the expenditure of $500,000, a ceremony to relight the restored Avery Point Lighthouse was held on October 15th, 2006. The main speakers at the event were Fran Mainella, National Parks Service Director, Philip Austin, President of the University of Connecticut, and Rob Simmons, U. S. Congressman. The actual relighting was performed by three individuals representing the Past, Present, and Future. Ken Black, who was stationed at Avery Point when it was the Coast Guard Training Station represented the Past. Fran Mainella represented the Present, and Lexis Foster, the twelve-year-old granddaughter of APLS Co-Chairman Ron Foster represented the Future.

For a larger map of Avery Point Lighthouse, click the lighthouse in the above map.

From I-95, take Exit 87 (CT 349, Clarence B. Sharp Highway) in Groton. Follow CT 349 turning right at the 2nd traffic light onto Benham Road and then turning left onto Eastern Point Road. Follow Eastern Point Road for roughly 1.2 miles passing the Shennecossett Golf Course. The road will lead to the entrance of the University of Connecticut at Avery Point. After entering the campus, follow the circular drive past the rock police station and park. The lighthouse, the interior of which is not open to the public, is about 500 feet from the circular drive. Good views of New London Harbor Lighthouse and New London Ledge Lighthouse can also be had from the campus.

The lighthouse is owned by the University of Connecticut. Grounds open, tower closed.