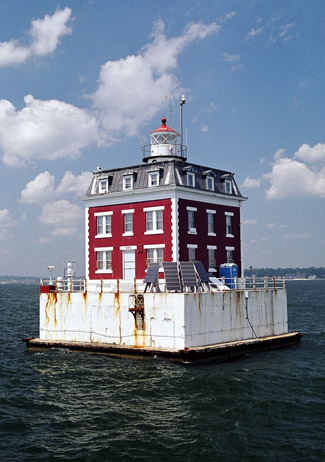 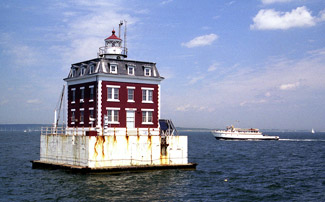 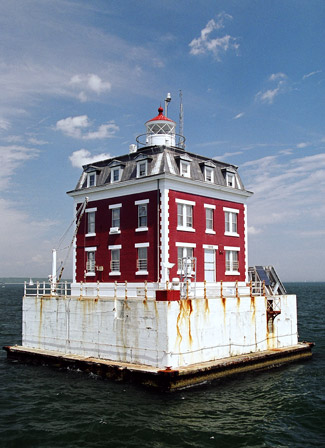 New London Ledge Lighthouse, with its square, redbrick quarters topped with a mansard roof and a circular lantern room, is one of the most striking and unusual-looking lighthouses in the United States. According to local legend, New London residents did not want to gaze out to sea at a structure that would be out of place among their large and historic homes, so Colonial and French architectural influences were used in the lighthouse. New London Harbor Lighthouse was established in 1761 to mark one of the most important ports on Long Island Sound. This lighthouse, just the fourth to be erected in the colonies, was an important beacon, but it failed to adequately warn mariners of the hazardous ledges located just offshore.

In 1853, Henry Hobart, Superintendent of Lights at New London, asked local mariners regarding the necessity of additional lights in the area, and the universal opinion was that a light instead of a buoy on Black Ledge at the entrance to New London Harbor would be a great additional protection to vessels navigating Long Island and Fishers Island sounds. Hobart sent the Lighthouse Board a signed petition and two letters from local captains calling for a light on the ledge that October, but it would be nearly six decades before the desired aid was realized.

The Lighthouse Board finally requested funds to construct a lighthouse on Black Ledge in 1890, after stressing the need for the light:

The necessity for establishing a light and an efficient steam fog signal in such a position as to enable vessels to enter and leave the harbor of New London, Conn., has become evident, and especially so for the aid of those approaching from seaward. The numerous outlying shoals and ledges surrounding the entrance to this harbor make the approach to it dangerous in thick weather. The location of the present New London light and fog-signal station is so far inside the obstructions as to be partially ineffective as an aid for the purpose of safe navigation of this entrance. The commerce of the port of New London has so increased, since the erection of the present light, as to change the conditions materially.  In view of these facts and the further fact that a naval station is in operation on the Thames River, which empties into New London Harbor, it is suggested that a light and a steam fog-signal station be established on the southwest ledge on the eastern side of the entrance to New London Harbor.

The Lighthouse Board repeated the funding request eleven times before Congress finally approved an act on April 28, 1904 appropriating $60,000 for establishing a light and fog-signal at or near Black Ledge. The Board then decided that the proper site would actually be on Southwest Ledge, about a quarter mile west of Black Ledge, as placing the light there would leave the channel to the west of the light free of obstructions. A light on Southwest Ledge was estimated to cost another $55,000, and Congress didnt provide the additional funding until March 4, 1909. In the interim, Congress did pass an act on March 4, 1907, authorizing the Board to enter into a contract for the lighthouse using the sum provided in 1904 given that the total cost didnt exceed $115,000.

After plans were prepared, bids for erecting the lighthouse were opened on June 4, 1908, and a contract was awarded in the sum of $73,000 to New Londons T.A Scott Company. To provide the foundation for New London Ledge Lighthouse, a timber crib made of southern yellow pine and held together with nine tons of iron and steel, was first constructed on shore at Groton. Four tugboats towed the crib to Southwest Ledge, a short journey that took eight hours on August 18, 1908, and the wooden crib was then filled with concrete, gravel, and riprap to secure it in place in twenty-eight feet of water.

The Lighthouse Bureau published the following description of the work in 1912:

The structure consists of a timber crib 52 feet square and 31 feet high filled with concrete next to its outer face and the interior filled with riprap and gravel, with a deposit of riprap on the outside 10 feet deep next to the crib and 82 feet square. The top of the crib extends 3 feet above mean low water and is capped inside the upper timbers with a layer of concrete 3 feet thick. This layer supports a concrete pier 50 feet square to a height of 18 feet above low water, the pier being provided in the interior with a cellar. The pier in turn supports a 3-story brick dwelling about 32 feet square and 34 feet 6 inches high, with mansard roof, from the top of which projects an octagonal brick watch room forming the base for a fourth-order, cylindrical, helical bar, cast-iron lantern, whose focal plane is 43 feet above the top of the pier.

The cellar in the upper portion of the concrete pier contained coal and oil rooms, a cistern, and a fog-signal engine room. A kitchen, sitting room, workroom, and bedroom were located in the first story of the lighthouse, while the second level had had four bedrooms. The third story was divided into three rooms, one of which contained the fog-signal apparatus. The work on the superstructure was sublet to the New London firm of Hamilton R. Douglas, and the total cost of the lighthouse came to $93,968.96.

The lighthouse was placed in operation on November 10, 1909, with the stations fourth-order Fresnel lens, crafted in Paris by Henry-Lepaute, repeating the distinctive signature of three white flashes followed by one red flash every thirty seconds. In addition to the pulsating light, the stations first-class, six-inch air siren also sounded a three-second blast every twenty seconds as needed.

Playwright Eugene ONeill lived in New London for many years, and his famous play Long Days Journey Into Night was set in the town. During one scene in the play, the characters refer to the fog signal at New London Ledge, a sound familiar to residents of New London.

In 1916, Keeper George Hansen recounted how he rescued an eagle with a six-foot wingspan after he saw it flying in an erratic fashion before tumbling into the sound. Keeper Hansen cautiously rowed out to the bird and captured it with a scoop net. With the eagle tethered to the lighthouse by a rope about its leg, Hansen nursed the bird back to health. Rather than being grateful to its savior, the eagle became vicious, and Hansen had to cut the rope and stand back as the eagle flew away with a knot still on its leg.

New London Ledge isnt the only New England lighthouse said to be haunted, but its resident ghost Ernie is the most famous of the supernatural denizens. Before the station was automated, the Coast Guard crew on duty reported various strange happenings: mysterious knocks on their bedroom doors in the middle of the night, doors opening and closing, the television being turned on and off repeatedly, and even having the covers pulled off the end of their bed. Falling back to sleep after being awakened by a strange noise was often a problem.

The lighthouse keepers were finally given a rest when Ernie was rescued by two psychics from Chester in 1981. Roger and Nancy Pile say that Ernie was an earthbound  a spirit that isnt able to leave earth after a traumatic death. Ernie was reportedly an early keeper at New London Ledge, who one evening, after a bitter fight with his girlfriend, returned to the lighthouse and decided to end it all. No one seems to be sure exactly when this suicide happened, and the Piles say they forgot to ask when they were communicating with Ernie.

The Piles did learn how Ernie killed himself  by taking a fishing knife to the roof of the tower and cutting his throat. His body fell into the sea, never to be recovered. Ernie soon discovered that life didnt end at death, and he was inexplicably linked to the lighthouse in spirit. Uncertain what to do, Ernie decided to do what he knew best, maintain the lighthouse. When visited by the Piles, Ernie was eager to finally leave the earthly plane, but harbored fear that he would miss his old lighthouse. The Piles generously gave Ernie permission for occasional visits to his old haunt.

On October 2, 1981, John Garosshen, a contractor installing metal safety railing around the lighthouse, slipped off a railing and was knocked unconscious when he fell about twenty-five feet into the water. Richard J. Mumenthaler, one of the coastguardsmen stationed at the lighthouse, happened to walk outside just as Garosshen fell, and he jumped into the water and rescued the contractor. Vernon L. Smith, another coastguardsmen, helped pull Garosshen out of the water and radioed for assistance.

New London Ledge was the last remaining manned lighthouse on Long Island Sound when it was finally destaffed in 1987. The automation process began in 1984, when the Fresnel lens was dismantled and removed from the lantern room and replaced by a modern beacon. During its final years of manned operation, a four-man Coast Guard crew was typically on duty for tours of eighteen months at a time. Each crew member stood guard for a daily twelve-hour watch, during which his duties included monitoring the light, transmitting weather information to ships and shore, and performing maintenance on the station. Every few weeks, the crew received six days of shore leave. Life on the remote station must have been less than exciting for some of the young crew members  the final day of manned operation shows a log entry reading, Rock of slow torture. Ernies domain. Hell on earth  may New London Ledges light shine on forever because Im through. I will watch it from afar while drinking a brew.

In 1988, the lighthouse was leased to New London Ledge Lighthouse Foundation. Project Oceanology, another non-profit organization, started taking school children out to the lighthouse to educate students about maritime matters while the station was still staffed and continues its programs to this day. In 2011, the Ledge Light Foundation, cleaned up, repaired, and painted the lighthouse, inside and out, before installing an interpretive center. The center makes use of the entire lighthouse, with many rooms of exhibit panels that educate the public about Ledge Light and lighthouses in general. Visitors can also tour a furnished keepers room, enjoy a professionally produced orientation film in an air conditioned theater, and purchase souvenirs in the centers gift shop.

On May 1, 2013, the General Services Administration announced that New London Ledge Lighthouse was excess to the needs of the Coast Guard and was being made available at no cost to eligible entities defined as federal agencies, state and local agencies, non-profit corporations, educational agencies, or community development organizations, for education, park, recreation, cultural, or historic preservation purposes. Interested entities were given sixty days to submit a letter of interest, and in 2014, the New London Maritime Society was announced as the new owner of the lighthouse. New London Ledge Lighthouse Foundation, an all-volunteer organization, will still continue its role of restoring, preserving, and interpreting the lighthouse.

Located at the entrance to the Thames River in New London, one mile offshore from the New London Harbor Lighthouse.
Latitude: 41.30597, Longitude: -72.07743

For a larger map of New London Ledge Lighthouse, click the lighthouse in the above map.

This light is best seen by boat. Various tours to the lighthouse, which include landing at the lighthouse for a self-guided tour, are offered during the summer. The lighthouse can also be seen on Lighthouse Cruises offered by Cross Sound Ferry. Any of the ferries operating out of New London should also provide a decent view of the lighthouse.

The station's Fresnel lens can be seen at the Custom House Maritime Museum in New London.

The lighthouse is owned by the New London Maritime Society. Dwelling/tower open during tours.