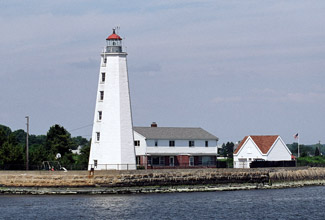 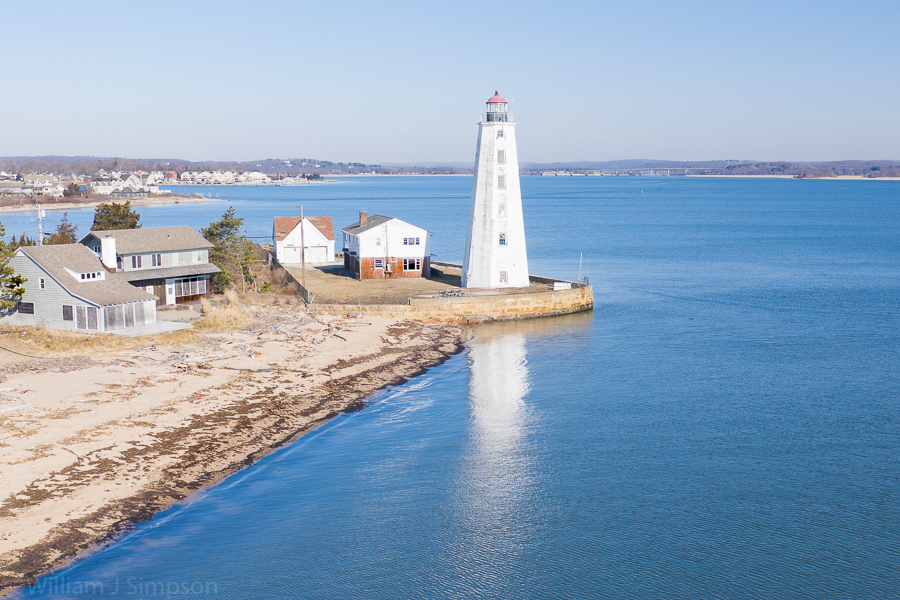 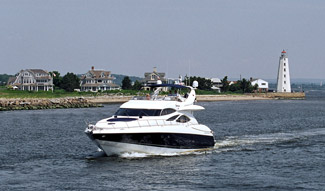 The quaint village of Old Saybrook is situated on the west side of the entrance to the Connecticut River. First settled in 1635, the town was incorporated in 1852. The mighty Connecticut River, the largest in New England, meets Long Island Sound at Old Saybrook, and by the beginning of the nineteenth century, ship traffic calling at the harbor at Old Saybrook was considerable. In 1802, the government paid William Lynde $225 for land at the harbor entrance, and a year later Lynde Point Lighthouse, a thirty-five-foot-tall, wooden tower, was completed by New London carpenter Abisha Woodward at a cost of $2,200, a goodly sum for that time. Seven lamps, backed by nine-inch reflectors, were used in the towers lantern room to produce a fixed white light that could be seen up to about ten miles.

Philp Grumley served as first keeper of the lighthouse for roughly fifteen years before King Miller took charge of the light in 1819. An item in the New York Spectator in 1827 noted that Keeper Miller drowned on June 11 of that year in Saybrook Harbor after his small skiff was upset. Daniel Whittlesey was the next keeper of the lighthouse, and when he died in June 1842, his wife Catharine became head keeper and looked after the light until 1852.

Lynde Point Lighthouse was designed to be a leading light for ships coming through Long Island Sound, as well as a marker for the entrance to the Connecticut River. Like other wooden lighthouses of the time, Lynde Point Lighthouse was not tall enough to be seen effectively by ships and was the subject of much criticism by local sailors. Another problem was that evaporation from the nearby marshland created a local mist that obscured the light, even when the weather was clear out at sea.

In 1838, Lt. George Bache described the keepers quarters at the time as a sound six-room frame structure, but regarding the lighthouse he wrote: The tower is very much decayed, and is about to be taken down; a contract having been made to erect a stone tower in its place.

Proposals to rebuild the lighthouse were solicited in 1837, but none of the offers received were within the appropriated amount of $5,000. After Congress allocated an additional $2,500 on July 7, 1838, the original light was replaced by a sixty-five-foot, octagonal, brownstone tower built by Jonathon Scranton, Volney Pierce, and John Wilcox of Madison, Connecticut. The lighthouses walls are five feet thick at its base and are currently painted white, though the original red of the stone is visible in some places when the paint is peeling. All the windows in the tower face the water, an arrangement that allowed early keepers to have a better view of ships crossing the shallow bar at the river entrance, a tricky and dangerous crossing before the breakwaters were installed around 1880. After a lighthouse was placed at the outer end of the west breakwater, Lynde Point Lighthouse was also referred to as Saybrook Inner light, while Saybrook Breakwater Lighthouse was also known as Saybrook Outer Light.

A. Ludlow Case, Inspector for the Third Lighthouse District, submitted the following description of Lynde Point Lighthouse in 1855 along with needed upgrades:

The crib-work supporting the foundation of the tower is decayed and giving way; the tower, I think, has the appearance of settling to the northeast, and should be attended to at the earliest date possible. The lantern is old, sashes large, and lights of glass very small. I would recommend that it be removed, and a fourth-order lantern take its place, with a fourth-order lens to illuminate 300°, in place of the ten lamps and 14-inch reflectors now in use. The dwelling leaks badly, and bas been reported not worth repairing. I have to recommend that it be rebuilt; and as the public grounds are very circumscribed, that they be increased also.

In 1857, a fourth-order Fresnel lens was installed atop the tower, a fog-bell tower was added to the station, and work commenced on a new keepers dwelling and a seawall to protect the site. Additional upgrades were planned in 1868 in the form of a cast-iron deck plate for the lantern room, brick lining and an iron staircase for the tower, and a new storeroom to be placed between the tower and keepers dwelling, but the iron staircase and brick lining were never installed. The power of the lighthouse was diminished on January 1, 1890 when a fifth-order lens, which remains atop the tower to this day, was installed.

John N. Buckridge enlisted in the U.S. Navy in 1850 at the age of seventeen and sailed to such foreign ports as Tokyo, Shanghai, Cape Town, and Rio de Janiero. A year after the outbreak of the Civil War, Buckridge joined the Union Army and fought in Fredericksburg, Gettysburg, and several small battles in northern Virginia. On March 24, 1864, Buckridge was part of a wood cutting detail near Culpepper, Virginia, when his axe slipped and he cut off a toe. Gangrene set in, and his right leg soon had to be amputated at the thigh. After recuperating and being fitted with a wooden leg, Buckridge was discharged in July 1865.

Buckridge ran a food market in West Farms, New York until 1877, when he entered the Lighthouse Service as an assistant keeper at Stepping Stones Lighthouse. A year later, he was transferred to Stratford Shoal as first assistant, and then in 1881 was promoted and placed in charge of Lynde Point Lighthouse. John and Margaret Buckridge had six children, four of whom survived to adulthood. Thomas Buckridge, the couples only son, became a lighthouse keeper himself, serving at Montauk Point Lighthouse before ending his career at Saybrook Breakwater Lighthouse.

Lawrence Gildersleeve, who was born in Lynde Point Lighthouse in 1906 while his father Elmer was keeper, recalled his childhood living in a lighthouse for a 1975 interview in the New Haven Register. To pass time, the family played cards, listened to the phonograph, or just watched the passing parade of ships. Gildersleeve did not recall ever feeling lonely there. Sometimes he was sent out the front door to catch some supper for the family, and usually within twenty minutes he would have some eels or flounder. Young Lawrence made friends with the families in the nearby village, and sometimes caddied on the local golf course.

Elmer Gildersleeve was in charge of the lighthouse from 1903 to 1925, and during this time he assisted several people who found themselves in trouble near the station. In 1915, Keeper Gildersleeve helped two people whose boat was caught in ice reach the shore and then cared for them overnight and helped repair their boat. On August 24, 1922, a group of vacationers were swimming off Folly Point near the lighthouse when a man and woman were carried out by the tide. Keeper Gildersleeve spied the pair and rescued them from drowning.

Lighthouse life was not for everyone. In an Associated Press article from January 1976, Violet Horoschak, wife of one of two coastguardsmen stationed at the lighthouse, gave her opinion: Everyone says it must be great to live next to the lighthouse, she said. Let them try it. Its so boring, theres nothing to do. Its a place to get fat, eat, and lie around and watch TV. Even my dogs gained weight. Perhaps her opinion would have been different had she been interviewed during the summer.

Much to the chagrin of the Old Saybrook Historical Society, in 1966, the Coast Guard demolished the attractive gothic revival gambrel-roofed keepers dwelling that dated to 1858 (shown in the historic photograph) after replacing it with a nondescript duplex.

Lynde Point Lighthouse was automated in 1975, although it continues to be manned to prevent vandalism. The road to the lighthouse is not open to the public, unfortunately. The surrounding neighborhood is quite exclusive and counted the late Katherine Hepburn as one of its residents for many years.

Located at Lynde Point near the foot of the Saybrook Breakwater along the western side of the entrance to the Connecticut River.
Latitude: 41.27153, Longitude: -72.34318

For a larger map of Lynde Point (Saybrook Inner) Lighthouse, click the lighthouse in the above map.

The lighthouse is located at the end of a private road, but distant views can be had nearby. From Interstate 95, take Exit 67 and proceed south on Elm Street to Main Street (Highway 154). Turn right onto Main Street and follow it for 2.5 miles to Saybrook Point Inn and Marina. At that point, turn right on Bridge Street, crossing over South Cove, and then turn left onto Nibang Avenue. From Nibang Avenue, turn right onto Fenwick Avenue, left onto Agawam Avenue, and then left onto Neponset Avenue, where you will get a distant view of Lynde Point Lighthouse.

River Quest offers cruises that pass by the lighthouse.


The Town of Old Saybrook and Lynde Point Lighthouse, which is known as Hell's Beacon, appear in the movie Predator Island. Interior and exterior shots of the lighthouse are used, and there is a good view of the lantern room and its Fresnel lens. But be warned - just because a movie has a lighthouse in it doesn't mean it is a good movie.