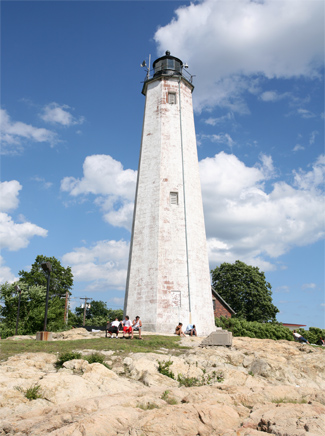 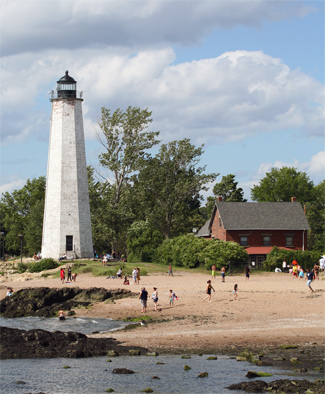 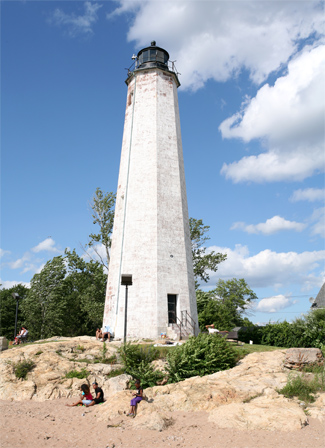 Just south of Five Mile Point Lighthouse lies the grave of British Ensign and Assistant Adjutant Watkins, who met his end on July 5, 1779. The British, with their sights set on New Haven, attempted a landing at Five Mile Point during the Revolutionary War, but the Americans were waiting. As he approached the shore, Watkins cried out from the lead boat, Disperse ye rebels! But they did not, and Watkins was killed in the subsequent battle.

Five Mile Point, named for its distance from downtown New Haven, became the sight for a lighthouse in 1805 to mark the entrance to New Haven Harbor. Mariners knew to give the light a berth of at least two miles to avoid a dangerous ledge to its southwest.

The original lighthouse was a thirty-foot-tall, wooden, octagonal tower, with shingled sides and roof. Its light consisted of eight lamps, set in thirteen-inch parabolic reflectors and placed around a circular table, and was visible for nearly thirteen miles. In 1835, a two-and-a-half story keepers dwelling was added to the station.

The first keeper was Amos Morris, the landowner from whom the government purchased the necessary tract of land for the lighthouse for $100. The property had been in the Morris family since 1660 as part of an original grant by the Colony of New Haven.

One night during the Revolutionary War, Morris heard the British approaching his property. He mounted his horse and began shouting out orders to the stones and trees, as if they were Americans lying in wait. The British fell for the ploy, and believing they would be met by Americans, immediately returned to their boats.

The British eventually succeeded in overtaking the point. Morris, hoping the British would spare his home, set his dining room table with all the food and luxuries he possessed, and then left the property. His hospitality didnt pay off. The British burned his home and all the buildings on his estate to the ground. Morris rebuilt home can be seen today just outside Lighthouse Park.

Morris served as keeper for three weeks, until the post was turned over to a Mr. Wedmore and then Jonathan Finch, who held the position until his death in 1821. The Connecticut Journal carried the following advertisement in 1806 that shows Finch, a revolutionary soldier, was running a side business at the lighthouse to supplement his income: Jonathan Finch, (on the Five Mile Point, at the Light-House), informs the inhabitants of New Haven and its vicinity, that he has provided himself with a good assortment of liquors and can accommodate parties with lobsters, black-fish and clams. He flatters himself he shall be able to give general satisfaction. Keeper Finchs son Milton inherited the position, but died just a mere three years later at the age of thirty-five. Under the watch of Elihu Ives (1824  1846), a new tower was constructed.

Mariners had been complaining for years that the light was not bright enough, nor tall enough to be seen over a row of trees to the east of the lighthouse. In 1845, a new tower was recommended, and it was suggested that a better placement would be on the offshore Southwest Ledge that gave mariners so much trouble. Building on the ledge was found unfeasible, so instead, a new tower was built at Five Mile Point for $10,000.

Completed in 1847 by Marcus Bassett, the new tower, painted white, stands sixty-five feet tall. The exterior is made of East Haven sandstone from Jabez Potters quarry, the interior lined with New Haven brick, and the seventy-four steps leading to the lantern room are carved from solid granite. The new light, at a focal plane of ninety-seven feet above the water, was produced by a system of twelve lamps with twenty-two-inch reflectors. The lamp system was upgraded to a fourth-order Fresnel lens in 1855.

A two-story brick dwelling was built just north of the lighthouse and was connected to it by an enclosed wooden walkway. The dwelling still stands today, but the wooden passageway disappeared years ago.

Elizur Thompson came to serve as keeper in 1861, but tales of Alaskan gold lured him away from the post in 1867. He returned two years later, out of luck and completely broke, but more content with the tedious life of a lighthouse keeper.

A fog bell rung by a caloric engine was erected at Five Mile Point in 1860, and a few years after this, an assistant keeper was assigned to the station to help with the extra workload.

The Annual Report of the Lighthouse Board for 1868 listed the following needs at the station:

The tower requires new windows; in every other respect it is in good condition. The dwelling and kitchen, the adjoining sheds, and the oil vault, are unfavorably, located, and not properly drained, in consequence of which the surface water accumulates there and causes the rotting of the floor beams and floors, besides dampness in the dwelling. At times the oil-vault has as much as eight inches of water on the floor. The cistern leaks. The stable and barn are in very bad condition, and the fence requires attention.

It is proposed to put new windows in the tower; to use a part of the passage-way, between the tower and house, for a storeroom; to lay suitable drains under the dwelling and adjoining buildings; to renew the floors and floor timbers; repair the plastering and repaint the wood-work; to repair the engine-house, rebuild the stable and barn, and thoroughly repair the fences. An estimate of the cost is submitted.

Following an appropriation on July 15, 1870, the needed repairs and renovations were carried out, and a Stevens striking apparatus took the place of the caloric engine in ringing the fog bell.

The possibility of a lighthouse at Southwest Ledge was reexamined in 1872. The ledge, located in the center of New Haven Harbors shipping channel, was a formidable obstacle, covered by only seven-and-a-half feet of water at low tide. This time the technology was available to make it happen. Southwest Ledge Lights first official night, January 1, 1877, would be Five Mile Points last. Elizur Thompson continued his service at Southwest Ledge until 1881, and then remained at Five Mile Point where he earned an annual salary of one dollar to serve as custodian of the property until his death in 1898.

The War Department took ownership of Five Mile Point in 1896 and later leased the property to Albert Widmann, who for a small fee allowed visitors to climb the tower. When the lease expired in 1922, the land was transferred to the State of Connecticut and the buildings to the city of New Haven. In 1949, Lighthouse Point Park was opened to the public.

The tower was renovated in 1986, complete with a new paint job and years of guano deposits steam cleaned from the staircase. Today, the tower graces the peaceful shore of Five Mile Point, where the only uproar is the occasional squeals from the nearby carousel.

For a larger map of Five Mile Point (Old New Haven) Lighthouse, click the lighthouse in the above map.

The lighthouse is owned by the City of New Haven. Grounds open, dwelling/tower closed.