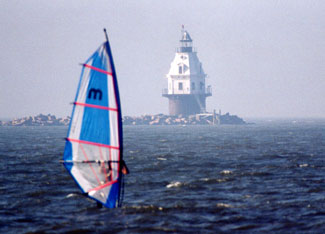 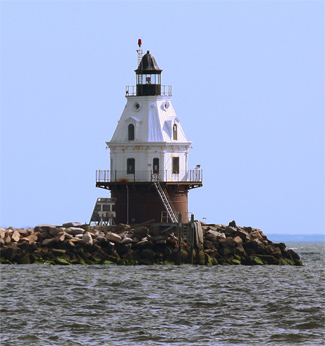 Southwest Ledge, located one mile offshore at the east side of the entrance to New Haven Harbor, is a formidable obstacle, covered by only seven-and-a-half feet of water at low tide. When the possibility of a lighthouse for the ledge was explored in 1845, it was determined that building a lighthouse on the ledge for a reasonable cost was not feasible, and as an alternative, a replacement tower was erected at nearby Five Mile Point.

A wooden spindle, surmounted by a cage, was erected on Southwest Ledge to warn mariners of the hazard, but it was carried away by ice on more than one occasion.

The feasibility of removing the light from Five Mile Point to Southwest Ledge was reexamined in 1872, prompted by a resolution of Congress, and this time, the technology was available to make it happen. The Lighthouse Board provided the following response to Congress:

Southwest Ledge lies in the middle of the main ship-channel into New Haven Harbor, and forms a great danger to navigation. There are but 7 feet 6 inches of water on the rock at mean low water, and the question is between the removal of the rock by the Engineer Department of the Army, and the erection by the board of a light and fog signal to keep vessels from running upon it and other dangerous rocks in the vicinity. The main light at the entrance is now at Five-mile Point, on the mainland, on the east side of the harbor, and distant one mile from, and inside of Southwest Ledge. There is no doubt but that a light in the channel on this ledge would serve the interests of navigation better than the present light, and that it and a fog-signal also placed on the rock would be of more benefit to commerce than the removal of the ledge, since vessels could always run for the light, and keep clear of all the many dangers to navigation, which it will be observed exist at the entrance to New Haven Harbor. A light-house at Southwest Ledge would involve a very large expense on account of its submarine foundation, and the strength which would be required to resist the large fields of ice by which it would be assailed. The expense is estimated at $117,800.

Following a $50,000 appropriation for commencing work on the lighthouse, three thousand tons of rip rap were laid to form a protective hole for a cast-iron tube with a diameter of twenty-four feet. A severe storm hit the ledge in the winter of 1873  1874, throwing some of the huge stones into the empty hole. After the stones were removed, a stone ring was laid on which the iron tube would rest. The final section of the foundation tube was put in place during the summer of 1876, allowing work to begin on the superstructure. By the end of September 1876, the lighthouse was completed up to its dormer windows, and the entire structure was finished later that year.

Southwest Ledge Lighthouse, designed by Major George H. Elliott, is an eight-sided three-story cast-iron structure with a Mansard roof covering the top two stories. The forty-five-foot-tall structure is crowned by an octagonal lantern room, featuring an ogee roof. Cisterns and a cellar are located in the top of the concrete-filled caisson foundation, and the first story of the superstructure is divided into a parlor, sitting room, and kitchen. A stairway leads to the two bedrooms in the second story, and above this is found the watchroom and finally the lantern room.

The lighthouse design was deemed such a marvel that when the superstructure intended for Southwest Ledge was completed, it was put on display at the 1876 Centennial Exposition in Philadelphia, shining its light every night from July 4, 1876 until the close of the exhibition. A keeper lived in the lighthouse, tending the beacon each night.

Lit by Keeper Elizur Thompson, the last keeper of Five Mile Point Lighthouse, Southwest Ledge Lighthouse cast its lifesaving beam for the first time on January 1, 1877. Shining from a fourth-order Fresnel lens, the light could be seen for thirteen miles. The lighthouse was initially painted a very light drab, then red in 1880, and finally white, its current daymark, around 1890. On August 20, 1888, a second-class Daboll trumpet fog signal replaced the stations fog bell, and on May 15, 1889, a red sector was added to the light.

Henry C. Thompson, who had been serving as an assistant keeper, replaced his father as head keeper in 1881. Henrys tenure of twenty-one years at the lighthouse appears to be the longest of any keeper at the station, and he only left in 1898 because an investigating committee forced him to retire at the age of sixty-five for intoxication and neglect of duty.

As the cramped lighthouse didnt afford enough room to give proper draft to the fog signal engines, the Daboll trumpet proved inefficient at Southwest Ledge. On January 7, 1893, the trumpet was discontinued, and a fog bell once again tolled from the lighthouse. Congress allocated $3,000 on March 2, 1895 for a new fog signal at Southwest Ledge, and another second-class Daboll trumpet went into operation on March 30, 1897, but this time it was operated by duplicate oil engines instead of caloric engines.

Despite its architectural flair, the lighthouse was not a heavenly home. Keepers often complained of unending dampness, persistent cockroaches, and the nasty water captured from the roof and accumulated in the cistern. During the winter, storms would often carry some of the riprap stones into the stations landing space, making it difficult to access the lighthouse. The small, cramped, uncomfortable quarters eventually lead Assistant Keeper Nils Nilson to go berserk.

Nilson had previously served at Sakonnet Point Lighthouse in Rhode Island, where he earned a Congressional medal for a daring rescue, but for some reason, he was demoted and sent to Southwest Ledge, where his new living conditions proved unbearable. One night, after a minor disagreement, a deranged Nilson grabbed the fire ax and chased Keeper Jorgen Tonnesen around the tower, before Tonnesen barricaded himself into a storage room, and Nilson rowed off into the night.

Tonnesen decided not to report the incident, but convinced his brother-in-law to stay at the station as extra protection. Once again, Nilson lost his cool, and pinned Tonnesen against the wall threatening to cut his throat with a butcher knife. This time, Tonnesen was saved through the intervention of his brother-in-law. Shortly after, in January 1908, Nilson went to shore and sadly took his own life. Keeper Tonnesen died at the lighthouse in 1914 at the age of seventy-one.

The lives of many stranded souls were saved through the efforts of the keepers stationed at Southwest Ledge. Assistant Keeper Sidney Thompson was credited with saving four people at great personal risk soon after the light was established. Between 1914 and 1924, the keepers were instrumental in saving the lives of at least twenty people, with Keeper Albert Wilkinson and Second Assistant J. Eliot Duley rescuing a man, woman, and a little girl whose rowboat had been swept onto the breakwaer in August 1921 in a high wind.

The stations fixed white light with a red sector was changed to a flashing red light and the sector discontinued in 1934.

In November 1942, Keeper John Ostman lost his balance while descending a ladder at the lighthouse and fell several feet onto the rocks surrounding the tower. A Coast Guard boat rushed Ostman to shore, but he died the following day at a hospital in New Haven after suffering broken ribs, a punctured lung, and a head injury.

The light was automated in 1953, and a modern optic replaced the Fresnel lens in 1988. Today, Southwest Ledge Lighthouse, with its foghorn and flashing red light, continues to warn mariners of the dangerous hidden ledge.

In May 2015, Southwest Ledge Lighthouse was declared excess to the needs of the United States Coast Guard and made available to eligible organizations under the provisions of the National Historic Lighthouse Preservation Act of 2000. Qualified entities were given sixty days to submit a letter of interest and were required to obtain a lease/license for legal occupancy of the submerged land from the State of Connecticut. After no suitable organization was found, the General Services Administration initiated an online auction for the lighthouse on July 1, 2016. Six bidders participated in the auction, which closed on September 2, 2016, with a high bid of $180,002.

The winning bid was soon revealed to have come from two groups that decided to team up for the auction rather than compete against each other: Werth Family Foundation, which supports the Werth Center for Coastal and Marine Studies at Southern Connecticut State, and Beacon Preservation, whose Green Light Academy has been using Goose Rocks Lighthouse in Maine for summer programs for inner-city students. While the lighthouse will be used as a marine field station and laboratory, open-lighthouse days wil likely be offered for the public.

For a larger map of Southwest Ledge (New Haven Breakwater) Lighthouse, click the lighthouse in the above map.