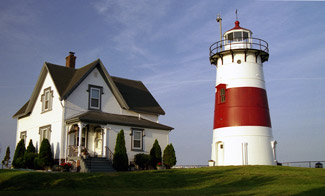 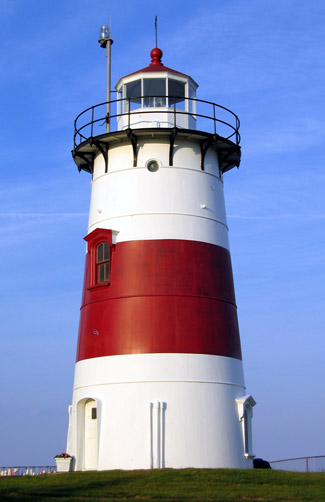 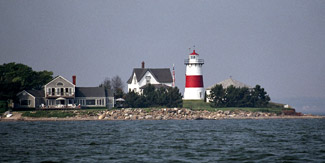 There was no gathering storm in the October night air in 1871 as the steamer Elm City passed Stratford Point Lighthouse. No apparent reason why the light burned unusually dim, but even still, the captain was grateful for that small light warning of the shifting sand bars and strong currents formed where the Housatonic River meets Long Island Sound. It was many years later, when the Bridgeport Sunday Post interviewed the then grown granddaughter of the keeper of Stratford Point Lighthouse, that the mystery of the dim light was revealed. On that night in 1871, Keeper Benedict Lillingston and his son, Assistant Frederick Lillingston, left the lighthouse to answer the call of a distressed vessel. Twelve-year-old Lottie Lillingston, visiting her grandfather and uncle and left alone at the lighthouse, noticed the light had gone out. There was one thing she was certain off, the importance of the light. She lit a brass safety lamp, then carefully climbed the steps of the tower. Going only by what she had seen her grandfather do, she stopped the clockwork, suspended the safety lamp in the lantern, and then restarted the rotation. Now there is a story waiting to be turned into a childrens book.

There was a light at Stratford Point long before a formal lighthouse was built. Tradition holds that in colonial times a bonfire was lit at the point when a boat was expected on a foggy night, and later, wood was kept burning in an iron basket attached to a pole. After congress allocated $4,000 on March 3, 1821, four acres of land were purchased on Stratford Point from Betsy Walker, and a twenty-eight-foot wooden octagonal lighthouse was built under the direction of Judson Curtis. Just the third light station erected on Long Island Sound, Stratford Point Lighthouse was established in 1822 and consisted of the octagonal tower, with its sides painted alternately black and white, attached to a one-and-a-half-story keepers quarters.

Samuel Buddington was hired as the lights first keeper, and members of the Buddington family continued to watch over Stratford Point for almost fifty years. Samuel Buddingtons maintenance and housekeeping habits apparently left something to be desired, at least according to an 1837 inspection report: This lighthouse is in the worst order imaginable. The oil was when I visited it dripping from the lantern nearly to the base  the copper of the lantern deck is ripped up in many places, allowing a free passage for the oil form the lamps, under which there are no drippings [tray] to catch it. There are the strongest indications of this lighthouse being kept in the most careless, and slovenly manner. After Samuel Buddington passed away in 1848, his wife Amy became keeper, and she received the following glowing report in 1850, Light-house and dwelling, and in fact the whole establishment, is in good order. Amy Buddington was assisted by her son Rufus, who became the official keeper in 1861. Rufus and Eliza Buddington raised eight children in the keepers cottage, but lost four of them to diphtheria during the winter of 1861  1862.

Autumn of 1822 brought one of the worst gales ever recorded at Stratford Point. Houses blew off their foundations, and hundreds of trees were ripped from the ground. The seas were so high and the winds so strong that salt spray was recorded three-and-a-half miles inland. Miraculously, the new lighthouse withstood it all.

The original lighting apparatus consisted of ten lamps and reflectors arranged in two clusters of five lamps each, and it revolved to produce a flash every two minutes and fifteen seconds. The light was refitted in 1855 with new clockwork machinery and an Argand lamp system with six lamps and twenty-one-inch reflectors. In 1857, the light was changed to a fourth-order Fresnel lens that produced a white flash every ninety seconds. A wooden tower was added to the station in 1864 to house a fog bell that was tolled by a clockwork mechanism, which took twenty minutes to wind and ran for two-and-a-half hours.

The Annual Report of the Lighthouse Board for 1867 reported on the poor condition of the lighthouse and recommended that a new tower and dwelling be built:

The tower is of wood and shows signs of decay. The lantern, of an inferior model, rests on a brick parapet, and is constantly out of repair and leaky. The lighting apparatus, consisting of two range lenses in an iron frame, gives flashes too short in duration and at intervals too long. The tower should be rebuilt, and provided with suitable oil and store-rooms. The keepers dwelling is in tolerable condition as yet, but rather small for a station with an assistant. It would therefore seem expedient to rebuild it at the same time as the tower. The fog-bell is of little or no use, and a more efficient one should take the place of it as soon as practicable.

After more than a decade of annual requests for funds to improve Stratford Point Lighthouse, Congress finally appropriated the necessary money in 1880, and work soon began on a new dwelling and tower. A forty-foot-tall, brick-lined, cast-iron tower was erected on the point, along with a new fog bell tower and a two-story, eight-room dwelling. The all-white tower, which housed a revolving third-order Fresnel lens in its decagonal lantern room, was given the distinctive marking of a reddish-brown band around its middle on May 15, 1899. A fourth-order Fresnel lens revolving in a bed of mercury replaced the third-order lens in 1906. Over the years, the tower has been a magnet for lightning, taking several strikes and grounding them in its concrete foundation.

One February delivered a storm that kept the bell tolling continuously for 104 hours. The storm abated for a brief period, and then the bell was again necessary non-stop for another 103 hours. Keeper Judson, spelled occasionally by a member of his family, had been kept at the winding the mechanism for nearly nine days.

Keeper Judson raised cocker spaniels and had one that became skilled at catching fish. One day in 1888, this dog proudly presented a two-and-a-half-pound eel to his master.

In July 1897, Herman Chase and Edward Howe of Bridgeport were having good luck fishing off Stratford Point while the tide was slack. When the tide turned, the men attempted to raise anchor, but in so doing upset their small boat. Chase valiantly helped Howe, who couldnt swim, stay afloat, but this extra load made it impossible to reach the upset boat. Agnes Judson, the teenage daughter of Keeper Judson, happened to be up in the tower and spied the young men struggling for their lives. She dashed down the tower, rang the fog bell to attract attention, and then swam out to assist them.

Keeper Judson and his son Henry were working in a field at the time, but when they heard the fog bell, they rushed to the scene and swam out to the fishermens boat. After righting the boat, the Judsons picked up Agnes and the two men and safely transported them to shore. Agnes refused to accept any gift or recognition for her heroism, and after having dried their clothes, the two fishermen returned to Bridgeport. When contacted by a reporter, Anges said, I do not see what makes people try to make such amount of matter of such a little thing. It was of no consequence, and did not amount to much. You will oblige me by saying nothing about it.

In 1900, Keeper Judson and his son saw two deer wade into the sound near the lighthouse and start to swim. Curious as to where they were headed, Judson launched a boat and followed behind them as far as Stratford Shoal Lighthouse, at which point he was convinced they were intent on swimming the entire thirteen miles to Long Island.

Another improvement to the station came in 1911, with the installation of a compressed-air fog siren. The bell tower was removed during the work and replaced with a brick building used to house the two engines needed to operate the sirens air compressor.

Neighbors didnt take kindly to the new fog signal. One woman rang up Keeper Judson and asked him why he wanted to ruin everyones nerves. Well Mrs. Dunbar, Judson replied, if that old siren was a noted singer in New York you would be the first one to go hear him and say it was fine. Anyway, I cant stop it. Maybe if you ring up President Roosevelt he might do something for you. You see hes got more power than I have. A sounding board and reflector were soon erected to focus the sound out over the water as much as possible.

After thirty-four years at Stratford Point, sixty-five-year-old Keeper Judson was informed in 1914 that he was being transferred to a light off Newport, Rhode Island. Officials of various steamboat companies, whose steamers transited the sound, signed a petition protesting the action, and one captain stated that he always felt safe with Judson on the point as not once during his service had the light or fog signal failed. The protestations proved successful, and Judson remained at the station until his retirement in 1919.

Stratford Point Lighthouse lost its lantern room in 1969 to accommodate the installation of automated DCB-224 aerobeacons. The lantern room was placed on display at Boothe Memorial Park in Stratford as part of the automation, leaving the tower standing sadly beheaded. Coast Guard personnel continued to live at the lighthouse until 1978, after which the station was controlled via microwave radio from Eatons Neck on Long Island.

To prevent vandalism, the dwelling was restored and again occupied by the Coast Guard starting in 1982. In 1990, with the installation of a smaller optic, the lantern room was refurbished and returned to the headless tower. Today, the unfailing light still guides mariners past the shifting sand bars of the mouth of the Housatonic River.

For a larger map of Stratford Point Lighthouse, click the lighthouse in the above map.