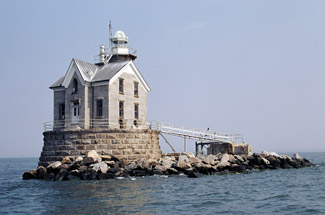 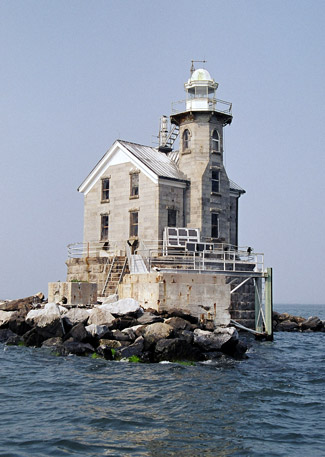 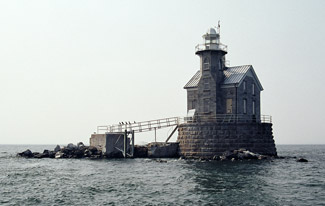 Stratford Shoal Lighthouse has frequently been classified as a New York lighthouse, and the land (less than one acre) for the lighthouse was indeed ceded to the federal government by the State of New York on May 11, 1874. Official maps today, however, place the lighthouse on the Connecticut side of Long Island Sound by a good 1,000 feet. Most Lighthouse Service records listed Stratford Shoal as a New York station, but it was occasionally listed as a Connecticut station as well. With valid arguments on both sides, the debate over whether the lighthouse should be classified as a Connecticut one or a New York one will likely never be settled. Its location midway between Connecticut and Long Island led to the lighthouse being also known as Middle Ground Lighthouse. The earliest known maps of Long Island Sound, charted by Adrian Block during his explorations of the area in 1614, show two islands where Stratford Shoal Lighthouse now stands. Over the following hundred years or so, the sea washed the islands off the map, leaving behind the dangerous Middleground Shoal, measuring three-quarters of a mile long. The rocks were located roughly in the middle of Long Island Sound, five-and-a-half miles from Stratford Point, Connecticut and five miles from Old Field Point, New York, and covered by less than two feet of water, they were a constant and dangerous threat to ship traffic.

The earliest known attempt to mark the rocks was around 1820, when a couple of spar buoys were placed on the north and south sides of the shoal. In 1831, a contract was awarded to a man named Hicks to erect an iron spindle on the reef, but no one seems to know whether the spindle was ever put in place.

The Lighthouse Board placed a lightship at the southeastern edge of Stratford Shoal in 1838. The one-hundred-ton ship was alternately known as Middle Ground floating light, Stratford Shoal Light Vessel, or Stratford Point Light Vessel until it received the designation of LV15 in 1867. The ship showed lights from each of two masts and carried a crew of six. The single anchor that held the ship in position was sorely inadequate, and only eight days after going into service, the lightship drifted off position. Despite adding two larger anchors, the problem persisted and the ship dragged anchor many times over the years. During the winter of 1875, pack ice pushed LV15 aground at Orient Point. The following year, the ship was reported missing, and finally found near Faulkner Island, over twenty miles away.

In 1872, the Lighthouse Board recommended that a lighthouse be built to replace the aging and troublesome lightship, and $125,000 was requested for the project. After $50,000 was provided to commence construction, a riprap ring in which a granite pier foundation could be placed was completed in 1874. Laying of the courses for the cut-stone foundation began in 1875, and the eleventh course, the coping course, was completed in November 1876. Cisterns and a cellar were placed in the upper portion of the concrete-filled pier, and the foundation work was completed by December 1, 1876. The foundation was built under the direction of D.V. Howell, with M.K. Chase, a Connecticut stone supplier, providing the cut stone for the project.

Work on the stone keepers dwelling and tower began in the spring of 1877. As the lighthouse was nearing completion, the schooner Mignonette, which was being used at the construction site to house men and store supplies, was driven onto the shoal by a severe winter storm on November 8, 1877 and sank. No lives were lost, and the crew took up residence in the lighthouse. Due to this and prior weather-related mishaps, the activation of the lighthouse was delayed until December 15, 1877. Over the next six months, more than 3,000 tons of riprap were placed about the lighthouse to prevent the currents in the sound from undermining the foundation.

The lighthouses foundation, built with huge undressed blocks of granite attached together with thick cast-iron staples encased in lead, stands nineteen feet tall and has a diameter of fifty-five feet at its base. The architecture used at Stratford Shoal Lighthouse shows a touch of Gothic influence, featuring a steeply pitched, cross-gable roof and hooded, pointed-arched windows on the upper story of the tower. The bottom portion of the tower is square, while above the second story, the corners are chamfered to create an octagonal cross-section. The tower rises three stories high and is attached to the south side of the twenty-eight-foot-square, two-story dwelling. The keepers dwelling has a living room, kitchen, five bedrooms, a sitting room, and a supply room. An iron spiral staircase leads up the tower to the lantern room and provides the only access between floors.

LV15 served as a Relief vessel for two years after the completion of the lighthouse and was then sent to the lighthouse depot at Staten Island, being not worth the cost of repair. The ship was sold at auction for $1,010 in 1881 to a contractor who used it as a floating barracks during the construction of Great Beds Lighthouse.

The first keeper at Stratford Shoal was an Irish immigrant named William McGloin, who had previously been captain of the LV15 lightship. Even though the keeper had two assistants, the station was very isolated and windswept, and there was a quick turnover of personnel over the years. Visitors were urged to bring stacks of the latest newspapers with them to help the keepers stay in touch with news on the mainland.

The isolation may have driven at least one assistant keeper mad. In 1905, Gilbert Rulon, the head keeper, was ashore for vacation, leaving his two assistants to take care of the stations duties. The first assistant keeper was Morrell Hulse, a fifty-four-year-old Long Island native and former sailor who had just arrived from two years of duty at Rhode Islands Whale Rock Lighthouse. The second assistant keeper was a Lighthouse Service rookie named Julius Koster, from New York City.

Newspaper reports state that suddenly and without warning, Koster charged at the other assistant with a razor lashed to the end of a pole. Completely surprised, Hulse managed to fight him off, and Koster seemed to calm down for the time being. But similar events reoccurred over the next few days, forcing Hulse to resist falling asleep at any time. Besides fearing for his life and being on the constant lookout for attacks, he had to keep the light going. This went on for five harrowing days, culminating when Hulse noticed the light had stopped revolving and ran to the lantern room to find Koster preparing to destroy the lens with an axe. Somehow Hulse prevented the destructive act.

Kosters moods became increasingly suicidal, and when help finally arrived, he had a number of self-inflicted wounds on his neck. He was returned to his New York City home, where he soon was successful in his suicide attempts. Later keepers at Stratford Shoal reported disturbances at the station that they blamed on Kosters ghost, including doors slamming by themselves, chairs being thrown around, and pots of hot water jumping from the stove.

In 1881, a second-class Daboll trumpet, which was powered by duplicate caloric engines and produced a six-second blast every twenty-seven seconds, was installed at the lighthouse, replacing a fog bell rung by machinery. The Daboll trumpet was in operation about 500 hours a year and consumed thirty pounds of coal per hour. The fog signal was discontinued between December 1, 1897 and January 15, 1898 while two Hornsby-Akroyd 3 ½-horsepower oil engines were installed to power the Daboll trumpet. A first-class air siren was established at Stratford Shoal in 1915.

Early on the morning of February 10, 1933, Keeper Lewis J. Allen and Assistant Keeper Alfred Auger spied the vessel Saugatuck that was apparently having engine trouble. After continued observation, the keepers realized the vessel was in serious danger, and they chopped away a heavy coating of ice in order to launch the stations boat into the choppy, ice-cold waters of the sound. Ten people were found aboard the Saugatuck, some of them severely frozen, and they told how they had been without food or heat for sixty-two hours. A radio electrician, who was working at the lighthouse at the time, made changes to the radiobeacon transmitter so that an emergency call for help could be made. An oyster boat responded and took the party of ten to shore that evening. The keepers received a commendation letter from the Secretary of Commerce, and the rescue was noted in their official record.

Fifty-nine-year-old Harry C. Buede retired as officer-in-charge of Stratford Shoal Lighthouse in 1962, after twenty-four years at the station. Buede joined the lighthouse service in 1936 and served a year at Race Rock Lighthouse and Fire Island Lighthouse before being assigned to Stratford Shoal. After having her husband living offshore a good part of the time, Mrs. Beude joked that she was going to have to adjust to living with him. Keeper Beude shared a few humorous events during his career, like the time his wife plunged into the sound one February while stepping between boats near Stratford Shoal Lighthouse. The funniest incident, Beude felt, was the following:

This boat comes up with two men on it  a cabin cruiser. The man on the bow was getting ready to throw out the anchor and turned to the other man and yelled it hasnt got a twing on it. The other man told him to throw it out anyway and he did. The man on the bow meant that there was no rope on the anchor, but he had trouble pronouncing string. The boat ran right onto the rock.

Stratford Shoal Lighthouse was fully automated on July 1, 1970, and its crew of four coastguardsmen was assigned elsewhere. Much of the interior detailing has since been taken out since. The lighthouse can be seen from a distance aboard the Bridgeport-Port Jefferson ferry.

In May 2014, Stratford Shoal Lighthouse, deemed excess by the Coast Guard, was made available under the guidelines of the National Historic Lighthouse Preservation Act to eligible entities defined as Federal Agencies, state and local agencies, non-profit corporations, educational agencies, or community development organizations, for education, park, recreation, cultural, or historic preservation purposes. Interested entities were given sixty days to submit a letter of interest.

In 2016, Nick Korstad, who owns Borden Flats Lighthouse in Massachusetts and Spectacle Reef Lighthouse on Lake Huron, was notified that his plan to use Stratford Shoal Lighthouse as a museum where guests could spend the night had been accepted. Korstad hoped to have the lighthouse ready to welcome guests in about two years.

For a larger map of Stratford Shoal (Middle Ground) Lighthouse, click the lighthouse in the above map.