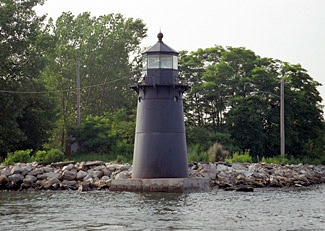 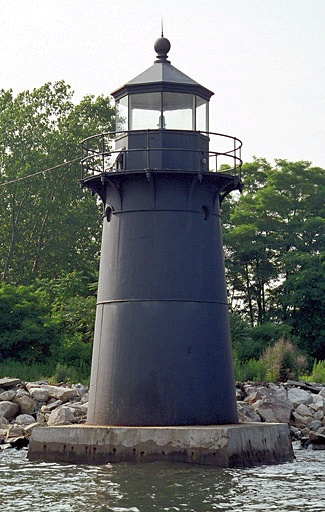 Gallantly standing on Bridgeport Harbors western shore is a little black lighthouse affectionately called The Bug. Only thirty-one feet tall, it has survived the wrecking ball and played guinea pig for a failed invention.

Shipping traffic in and out of Bridgeport Harbor greatly increased after the rail line came to town in the 1840s. To help protect the harbor, Brown and Flemming of New York constructed a breakwater in 1891 that extended several hundred feet offshore. When the sun went down, the rocky mass proved to be a dangerous obstacle, and in 1892, the Lighthouse Board requested $2,000 for a light to mark its outer end. Congress appropriated this sum on February 15, 1893, but when it was determined that a special foundation would have to be constructed, the Lighthouse Board had a temporary lantern light placed on the breakwater while waiting for additional funds. This light was placed in operation on January 31, 1894 and consisted of a cylindrical foundation pier surmounted by a wooden pyramid, from which rose a staff with a cask on top. A bracket for the lantern was attached to the staff between the cask and pyramid, giving the light a focal plane of twenty-four feet above the water.

After Congress supplied an additional $2,500 on August 18, 1894, work began on the permanent breakwater light, and it was placed in operation on March 1, 1895, casting forth a fixed white light. The conical, thirty-one-foot-tall, cast-iron tower that marked breakwater was installed under the supervision of Lt. Colonel D.P. Heaps and resembles ones used at such stations as Isle La Motte, Vermont, Crossover Island, New York, and Ten Pound Island, Massachusetts. Inside the tower, a winding cast-iron staircase around the outer periphery leads to the hatch door in the watchroom floor, while a curved ships ladder provides access to the lantern room from the watchroom.

Initially, Keeper Stephen A. McNeil tended both Bridgeport Harbor Lighthouse and the newly erected Bridgeport Breakwater Lighthouse. After a few years, as his health deteriorated, McNeil hired an assistant out of his own wages to tend the Harbor Light, while he continued keeping the breakwater light off Tongue Point. The assistant didnt keep his light in tip-top shape, and in 1901, the Lighthouse Board learned of Keeper McNeils delegation of duties. Instead of dismissing McNeil, which they could have done, the Board instead employed Ole Nicholas Alfred Anderson as keeper of the Harbor light and kept McNeil on as keeper of Tongue Point Lighthouse.

In 1897, with the advent of electricity, a new invention was tested at the lighthouse  an electric gong fog signal. The signal, however, proved unreliable, and it was discontinued on March 30, 1898. On July 28, 1898 an old-fashioned fog bell, struck a single blow every thirty seconds by electric machinery, was added to the station, but when this was found inefficient and unreliable, it was discontinued on October 5, 1898 and replaced on March 15, 1899 by a fog bell of roughly 100 pounds that was struck every eight seconds by a 10,000-blow machine.

Railing and about 1,000 feet of plank walk were added to the breakwater in 1900 for the protection of Keeper McNeil, who at times had to make several trips to the tower a day to tend the fog signal. In 1902, McNeil, who lived in a part of Bridgeport distant from the breakwater, built a small shanty next to the lighthouse at his own expense so he could be ready to start the fog signal at short notice. The Lighthouse Board finally requested $5,000 in 1905 so a piece of land could be purchased and a proper dwelling be erected close to the breakwater. Though the dwelling was never built, it would have been too late to serve Keeper McNeil as he passed away in 1904. Flora took over her husbands duties, becoming Bridgeports only female keeper.

In a 1913 newspaper article, Flora McNeil described some of the difficulties of attending the breakwater light:

I think perhaps the hardest trips are the ones made in winter when it has rained and turned cold for the plank is then a glare of ice and naturally very slippery. I have been out during snowstorms when the plank was so slippery it was scarcely possible to keep your footing and when the storm was so heavy that all you could see in front of you was the falling snow. You could hear the roar of water under your feet and see the snow melt as it touched the waves but you could hardly more than guess where to put your next step.

Tugboats laden with barges found the sharp turn around the breakwater very difficult to negotiate. To help accommodate them, in 1919, the shipping channel was made deeper and wider and the breakwater, along with the lighthouse, was dismantled and moved back roughly 300 feet, to its present location.

The lighthouse now stands on a ten-foot-tall concrete foundation, creating a focal plane of thirty-one feet. The base of the tower has a diameter of only twelve feet. When manned, the towers lower floor was used for storage, and the second floor served as both a watchroom and a record storage area. Unlike taller cast-iron lighthouses, Tongue Point does not have a brick lining within its cast-iron shell as it was not designed to be inhabitable.

The lighthouse was added to the National Register of Historic Places in 1990. When the nomination form was prepared in 1985, the lighthouse still had its fog bell, bell-striking mechanism, and some of the weights that were housed in the hollow cast-iron central column and used to activate the mechanism, but the bell and striking mechanism were gone by 1989.

A modern optic, a 155 mm lantern, replaced the classic Fresnel lens in 1988. Today, The Bug, also known as the Inner Harbor Light, continues to guide mariners safely into the harbor today, flashing a green beam every four seconds.

Tongue Point Lighthouse was offered for transfer to qualified entities under the provisions of the National Historic Lighthouse Preservation Act in 2004, but no applications were received. In March 2007, the lighthouse was withdrawn from the transfer process out of fears that its proximity to a power plant would make it a security risk if it were in private hands.

For a larger map of Tongue Point (Bridgeport Breakwater) Lighthouse, click the lighthouse in the above map.