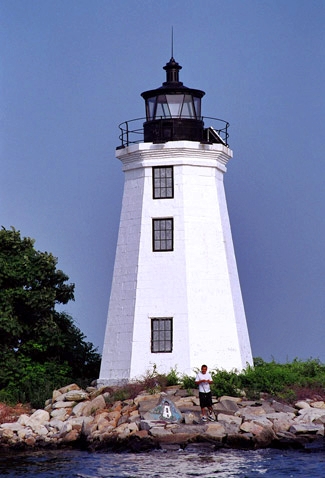 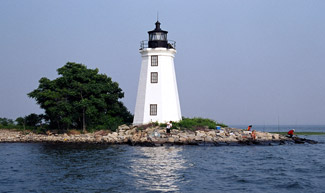 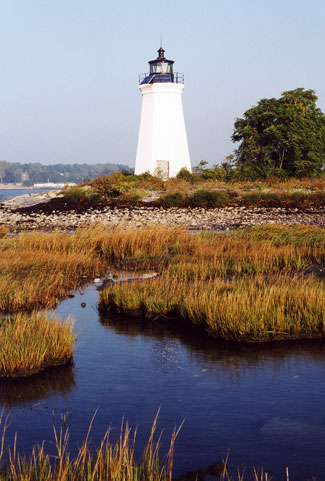 Black Rock Harbor, with its deep port sheltered by Fayerweather Island, was a developing shipping center in the eighteenth century, and it seemed only natural to build a lighthouse on the island to guide ships into the harbor.

The first Fayerweather Island Lighthouse, a forty-foot-tall octagonal wooden tower, was built in 1808 on a nine-and-a-half-acre tract of land purchased from David Fayerweather the previous year for $200. It was only the second site to be purchased for the purpose of a lighthouse on Western Long Island Sound. The keepers dwelling was originally a one-and-a-half-story home, having a kitchen, living room, and one bedroom, but over time, the residence would grow to eleven rooms. John Maltbie, the first keeper, died only five months after taking charge of the light.

Despite the short tenure of the first keeper, the position at Fayerweather Island rarely turned over, and the station only nine keepers in its 125 years of operation. Charles Isaac Judson, the second keeper, served from 1809 to 1814, followed by Daniel Willson from 1814 to 1816 and Joshua Lester from 1816 to 1817. The position then went to Stephen Moore, whose poor health soon rendered him unable to fully tend the light. Moore had been a West Indian merchant until he was injured while helping a friend get a load of hay. Keeper Moore remained the official keeper for fifty-four years, until his death in 1871 at the age of ninety-eight, but tending the light without title for most of those years was his daughter Kathleen. (Kathleen is also listed in various documents as Katherine, Kate, and Catherine.)

Kathleen began assisting her father in lightkeeping duties at age twelve and a few years later assumed most of his duties. She was made the official keeper upon her fathers and death continued to serve until 1878. Not only did she keep the light burning, but she was also credited with saving twenty-one lives during her sixty-two years at the light. (The 1870 Census lists a Joseph Eddy (40) with an occupation of lighthouse keeper living with Stephen T. Moore (96), Amelia Moore (88), and Catherine A. Moore (58).)

In an interview at age ninety-four, Kathleen recalled keeping the light:

It was a miserable one to keep going, too  nothing like those in use nowadays. It consisted of eight oil lamps which took four gallons of oil each night, and if they were not replenished at stated intervals all through the night, they went out. During windy nights it was impossible to keep them burning at all, and I had to stay there all night, but on other nights I slept at home, dressed in a suit of boys clothes, my lighted lantern hanging at my headboard and my face turned so that I could see shining on the wall the light from the tower and know if anything happened to it. Our house was forty rods (about 700 feet) from the lighthouse, and to reach it I had to walk across two planks under which on stormy nights were four feet of water, and it was not too easy to stay on those slippery, wet boards with the wind whirling and the spray blinding me.

Kathleen Moore lived alone at the lighthouse during her final years, but she wasnt lonely. I had a lot of poultry and two cows to care for, and each year raised twenty sheep, doing the shearing myself, and the killing when necessary, she said. Besides this, she read, kept a garden, tended oyster beds, and carved duck decoys for sportsmen and visitors. At the time she was interviewed, Kathleen owned her home and had a bank account of $75,000, which she had accumulated during her isolated life on Fayerweather Island.

The storm-tossed seas wreaked havoc on September 3, 1821, as a hurricane ripped through the island. The winds were so furious that every vessel went ashore in this harbor . . . [and] the Lighthouse [was] laid flat. The builder of the new light, a forty-one-foot-tall tower of coursed sandstone ashlar with rubble mortar, claimed it would withstand the storm of ages. Edmund Blunt, in American Coast Pilot, disagreed, stating, a more contemptible Lighthouse does not disgrace Long Island Sound, most shamefully erected and badly kept, but the tower, which cost $2,300 to build in 1823, has survived storms and vandals ever since.

The life-saving beam on Fayerweather Island was first cast by a whale oil spider lamp, taken from Stratford Point Lighthouse. The lighthouse apparatus was upgraded to a system with eight lamps and parabolic reflectors in 1830, and in 1854, a fifth-order Fresnel lens was installed in the lantern room.

After Kathleen retired, a new keepers dwelling was built in 1879 that greatly improved the appearance and comfort of the station. Leonard Clark, the next keeper, was a Civil War Veteran and former whaling captain. He served as keeper for twenty-eight years, until his death in 1906, whereupon Mary Elizabeth Clark, his wife, took care of the light until John D. Davies, the official replacement, arrived two months later. Davies, a veteran of the Irish Lighthouse service, would be the last keeper, serving until the lighthouse was officially discontinued on March 3, 1933.

In 1931, $22,900 was requested to establish new aids to navigation at Black Rock that led to the discontinuance of Black Rock Lighthouse. The following description of the existing light and the proposed new aids was provided by the Lighthouse Service with the funding request:

The present light is located on shore, a considerable distance from the dredged channel; also there is a rocky reef that extends out into the bay for a distance of one-fourth mile from the point on which the light is located, so that the light is not of sufficient use to the present traffic using this harbor and channel; therefore it is proposed to establish two acetylene lights, located out in the water, one on the outer end of the rock reef above referred to, and one on the west side of the channel opposite buoy No. 6. These lights are greatly needed to make night navigation of this channel possible.

In 1934, Congress deeded the decommissioned lighthouse and surrounding property to the City of Bridgeport for use as a public park, but over time it fell victim to the elements and vandalism. The keepers dwelling burned to the ground in 1977. In 1983, Friends of Seaside Park and the Black Rock Community Council showed interest in the structure and began preservation efforts, but sadly the tower was once again neglected and vandalized.

David Grant Grimshaw and Patricia Roche, two citizens of Bridgeport, could not stand by and let the tower fall into further decay. In 1993, they began a fundraising effort to preserve the lighthouse, and five years later, they saw their dream of having the tower restored realized. Graffiti resistant paint was applied and vandal proof steel panes, which from afar appear as glass, were installed in the towers windows in hopes that the restoration will hold this time. While the tower is not an official aid to navigation, solar panels and lighting equipment have been installed so the tower can be illuminated. With much time and effort, the tower is once again set to withstand the storm of ages.

In 2014, the Coast Guard honored the service of Kathleen Moore by naming a 154-foot Sentinel-class Fast Response Cutter after her and by placing a marker on her grave, which had never had a headstone. She proved that women performed with distinction  whether the job at hand was harrowing or dutifully and diligently routine, said Coast Guard Vice Admiral Brice-OHara. The crew of the Kathleen Moore will have high standards to uphold in honoring the legacy of this remarkable keeper.

For a larger map of Fayerweather Island (Black Rock Harbor) Lighthouse, click the lighthouse in the above map.

Fayerweather Island is now attached to the mainland by a breakwater. To reach the light, take Exit 26 from Interstate 95 and go east to Iranistan Avenue. Turn right on Iranistan Avenue and follow it until it ends at the water. Turn right on Soundview Drive, which will become Barnum Drive. At the end of Barnum Drive you will find Seaside Park, where you can park and walk the breakwater to the lighthouse. Out-of-state guests must pay $40 to enter the park.

The lighthouse is owned by the City of Bridgeport. Grounds open, tower closed.


These pictures were taken during two separate trips to the lighthouse: one by land, and the other by sea. If you trek out to the lighthouse, be prepared to slosh through some soggy patches of land, at least the area was marshy for us in the fall. I suppose you shouldn't glorify graffiti, but the painting on the rock in front of the lighthouse is not too bad. Let's just call it lighthouse art.