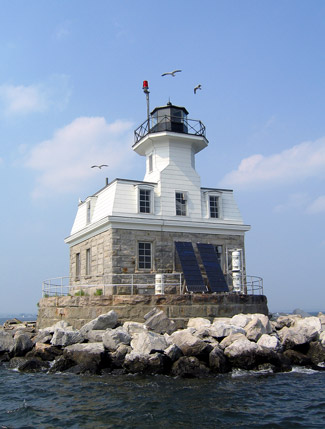 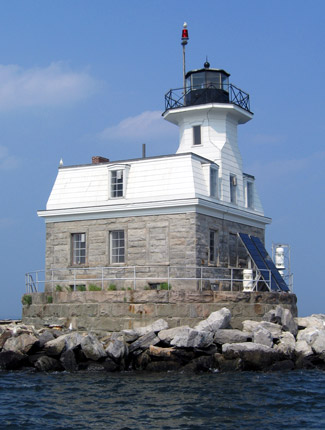 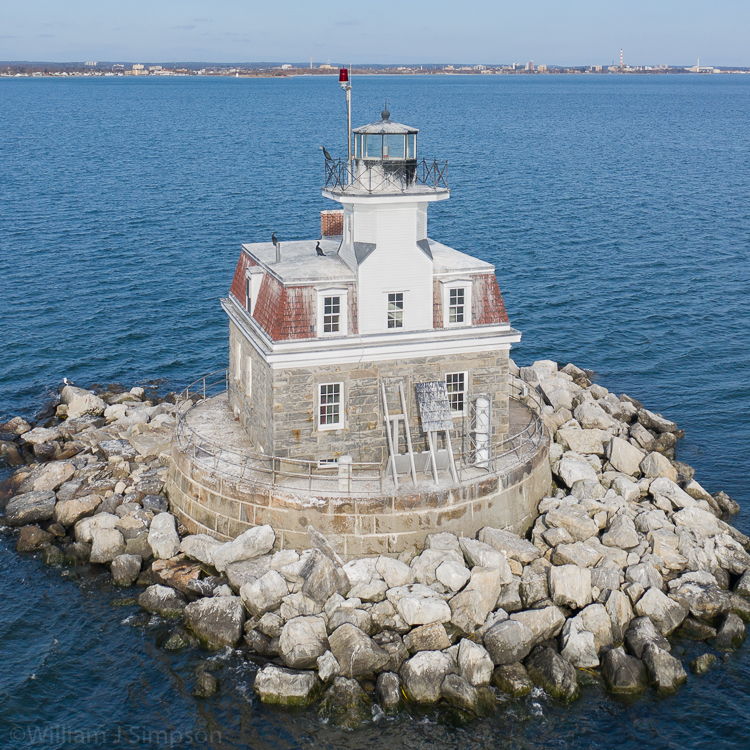 Penfield Reef, named after an early prominent Fairfield family, has for centuries been a dreaded hazard to mariners sailing Long Island Sound. For years, it was known as the Blue Line Graveyard, after a string of Blue Line barges grounded on the reef. Even with a modern lighthouse now in position, flashing a strong light as a warning, it is not unusual for several boats a year to run aground on the reef.

Penfield Reef is over a mile long, extending out from Penfield Beach in Fairfield, Connecticut. Even as late as the middle of the nineteenth century, only a pair of buoys marked the reef, and ships were regularly hitting the rocks. The steamer Rip Van Winkle, loaded with passengers, ran aground on the reef in 1864, but miraculously disaster was narrowly avoided. Incidents like this led local mariners and merchants to protest loudly for a lighthouse to be placed on the reef. In 1867, Captain D.C. Constable of the Board of Light-House Commissioners declared Penfield Reef to be the most dangerous locality, during fogs and snow-storms, upon Long Island Sound.

It took a few more years, but finally in 1870 and 1871 Congress allocated a total of $55,000 for construction of a lighthouse using plans that had recently been used to rebuild certain stations on the Hudson River. First, a granite riprap foundation was laid in 1871, followed the next year by an eighteen-foot tall pier, which was made out of cut granite and had a diameter of forty-eight-and-three-quarters feet at its base. (Around the turn of the century builders added 1,200 tons of riprap to the foundation for extra protection.) The pier was filled with concrete, although space was left near the top for a basement. Then a twenty-eight-foot-square keepers residence, complete with mansard roof, was built upon the pier in 1873. The first floor included a kitchen, sitting room, and oil room, and a wooden stairway led to four bedrooms on the second floor. The lighthouse began serving mariners on January 16, 1874, when a machine-operated fog bell and a fourth-order Fresnel lens exhibiting a flashing red light at a height of fifty-four feet were placed in operation.

On May 31, 1892, a Daboll trumpet, operated by duplicate Rider hot-air engines, replaced the stations fog bell. During its first year of operation, the new fog signal, which sounded a three-second blast every twenty seconds, was in operation 467 hours and consumed three-and-a-half tons of coal. The Daboll trumpet was invented by Celadon L. Daboll of New London, Connecticut and employed a trumpet with a tongue-like steel reed that was vibrated by compressed air. Two three-and-a-half-horsepower oil engines replaced the Rider engines in late 1898.

Penfield Reef Lighthouse is said to be haunted by the ghost of an old keeper. Just before Christmas in 1916, Head Keeper Frederick A. Jordan anxiously climbed into a small boat and began rowing towards shore to spend the holiday with his family, whom he had not seen for several weeks as a series of storms had kept him trapped at the lighthouse. Rudolph Iten, the assistant keeper, watched as Jordans boat capsized in the choppy seas. Due to the increasingly stormy weather, Iten was delayed in launching a rescue boat and watched helplessly as Jordan drifted away holding onto the overturned rowboat. Iten eventually lost sight of the head keeper, who was presumed lost and drowned. Jordans body finally washed ashore on Long Island the following March.

Rudolph Iten was promoted to head keeper after Jordans disappearance, and every so often he felt an unearthly chill in the lighthouse for unexplained reasons. One time he saw a hazy presence coming out of the dead keepers former room. After gathering his wits, Iten looked around the station and found that the logbook was taken down from the shelf where it was stored and had been opened to the page that described Jordans death! Even in more modern times, when the beacon occasionally behaves erratically, longtime locals say it is the ghost of Keeper Jordan having a little fun.

After ten years of service following the death of keeper Jordan, Iten said, I have seen the semblance of the figure several times... and so have the others [two assistant keepers], and we are all prepared to make an affidavit to that effect. Something comes here, of that we are positive.

In 1969, the Coast Guard announced plans to tear down the venerable granite structure and replace it with a pipe tower. Local residents began a vocal campaign opposing these plans, and with the assistance of then Congressman Lowell Weicker and State Representative Stewart McKinney, Penfield Reef Lighthouse was preserved. The beacon was automated on September 4, 1971 after ninety-seven years of manned service, and more than seventy local boaters joined the Penfield Power Squadron in a sail-by tribute to the lighthouse that day. The station was manned three more months while doorways and windows were sealed up. In the following years, the structure suffered from neglect. In 2000, an inspection showed that one of the main support beams had rotted, causing the lantern to tilt noticeably. The following year, water leaks in the lantern were repaired and mortar joints repointed. A new stainless steel roof was placed on the lantern room in 2003.

Penfield Reef Lighthouse was placed on the National Register of Historic Places in 1990. Although it is reportedly possible to walk to the lighthouse during low tide, legend says that an incoming tide swept away one family attempting the crossing. In any case, its not considered advisable, and the safest way to get a close-up view is with a boat. This ride is best done with a captain familiar with the area. A sign warns mariners of rocks near the lighthouse, and apparently a number of boaters have hit the rocks while trying to get close enough to read the sign.

The Coast Guard made preparations in 2005 to declare Penfield Reef Lighthouse expendable property and to transfer the title to an appropriate new caretaker, as directed by the National Historic Lighthouse Preservation Act of 2000. In 2007, Penfield Reef Lighthouse was offered to qualified entities, including non-profit organizations and state and local agencies. Although several organizations initially expressed interest in the property, only the Town of Fairfield and Beacon Preservation submitted a formal application. On July 29, 2008, Beacon Preservation was informed that they had submitted a superior application and were being recommended to assume ownership of the lighthouse. Beacon Preservation, which earlier acquired Goose Rocks Lighthouse in Maine, planned to partner with Aquaculture School in Bridgeport, Fairfield University, and Western Connecticut State University who would jointly use the site as a research facility.

As part of the transfer agreement, Beacon Preservation was required to obtain a lease from the State of Connecticut for the submerged land on which the lighthouse stands. Beacon Preservations lawyer, Keith Murray, expressed the groups concerns over this stipulation. We could spend a lot of money, get the lighthouse completely restored and start running programs, and the state could decide after the 10-year lease not to renew or charge us a hefty fee. In 2007, the Connecticut General Assembly had passed a law transferring the bottomlands to the town of Fairfield, but the town said it would transfer the land back to the state, who could then transfer it to Beacon Preservation.

Beacon Preservation sued the federal government in 2010 to secure the deed to the lighthouse without the need for a lease agreement from the state. In response, the U.S. Secretary of the Interior sent a letter to Beacon Preservation in February of 2011, rescinding the nonprofits accepted application for the lighthouse due to its failure to reach a deal with the state.

After a litigious year, Beacon Preservation decided to abandon their claim to Penfield Reef Lighthouse. Were letting it go at this point, said Keith Murray. Were not interested in the media attention or the lighthouse; were just done.

An online auction for the lighthouse opened on September 28, 2011 and closed on December 12 after only three bidders had each submitted just one bid. The winning bid was $45,000. The Penfield Reef Lighthouse Preservation Committee had been formed earlier in the year to try to raise funds to acquire the lighthouse for the Town of Fairfield, but after it failed to raise enough money to realistically win the auction, the town decided not to participate in the auction. Upon learning that the lighthouse is listed on the National Register of Historic Places and must be maintained within guidelines set by the Connecticut Historical Society, the top bidder decided to not close on the deal.

Hurricane Sandy ravaged Penfield Reef Lighthouse in 2012 with thirty-foot waves and a thirteen-foot storm surge, pushing in panels in doors and windows and ripping apart the built-in gutter on the roof. After receiving funds from the 2013 Disaster Relief Appropriations Act, the Coast Guard invited bids in 2014 for repointing the exterior granite, erecting a new railing and access ladder, repairing the roof and lantern room, and cleaning up the interior. The project, which was completed in 2015, cost around $1 million.

The GSA offered the restored lighthouse to the public via an online auction that started on July 12, 2016. Five bidders participated in the auction, which closed on October 10, 2016 with a high bid of $282,345. Americas Castles LLC was the highest bidder and intended to turn the offshore lighthouse into a columbarium. A bill to allow the lighthouse to be used as a columbarium passed the Connecticut House in 2019, but as of early 2020, the Senate had not voted on the bill. At that time, Americas Castles LLC still had to secure a lease from the state for the underground property on which the lighthouse stands.

After Americas Castles LLC had a change of management, the decision was made to not close the deal on the lighthouse. On June 21, 2021, the GSA initiated another auction for the lighthouse with a starting bid of $100,000. Six bidders participated in this auction, which closed on August 13, 2021 with a high bid of $360,000.

For a larger map of Penfield Reef Lighthouse, click the lighthouse in the above map.

Distant views from land are possible by taking I-95's Exit 21 and going south on Mill Plain Road to Highway 1. Turn left on Highway 1 then right on Reef Road, which will lead to the shore from where you can see the lighthouse.