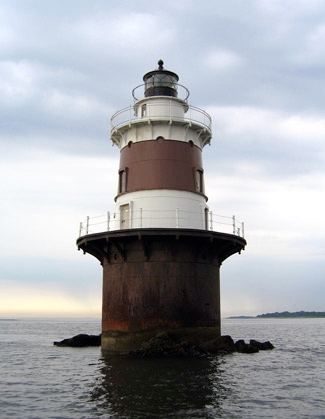 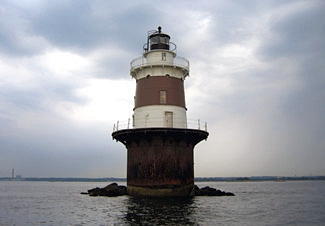 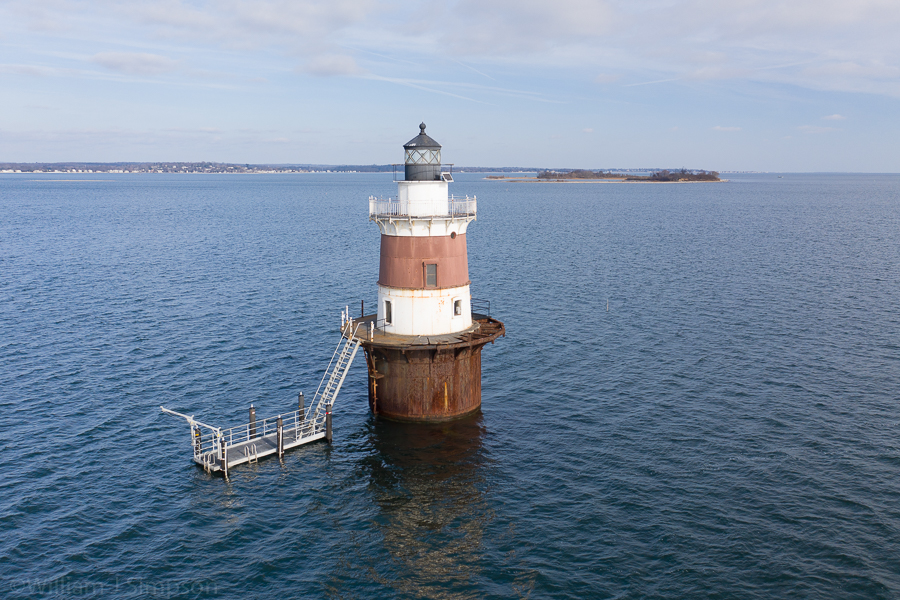 Peck Ledge Lighthouse (also known as Peck's Ledge and Pecks Ledge) is located at the northeast end of the scenic Norwalk Islands. Consisting of sixteen islands and countless smaller rocks, this archipelago has long been a major hazard to marine traffic entering and leaving Norwalk Harbor. The first lighthouse in the area was constructed on Sheffield Island, the largest of the Norwalk Islands, in 1827.

As the harbor was dredged to accommodate increased shipping traffic, underwater hazards that had not previously been a problem suddenly became dangerous to the increasingly larger ships with bigger drafts. As a result, Sheffield Island Lighthouse was no longer considered adequate, and it was replaced by the combination of Greens Ledge Lighthouse to the southwest, and Peck Ledge Lighthouse at the northeast end of the islands. The lighthouse at Greens ledge was completed in 1902, while the one at Peck Ledge, positioned to identify a shoal protruding north from Goose Island, was finished in 1906. Peck Ledge Lighthouse was the last built on a wave-swept site on Long Island Sound, and the one with the shortest staffed service period (only twenty-seven years, from 1906 to 1933).

On March 3, 1901, Congress appropriated $10,000 for a light and fog signal on Peck Ledge, but when the Lighthouse Board decided the structure needed to be large enough to accommodate two keepers, the estimated price tag rose to $39,000. A contract for erecting the lighthouse was made in December 1904, and a contract for furnishing the necessary metalwork was signed in January 1905.

At the time of its construction, there was a lot of griping from those familiar with the local waters as they felt that the new lights location would make it almost useless until a boat was actually entering Norwalk Harbor. Georges Rock, at the southeast end of a reef extending from Cockenoe Island, was deemed a better site, since it would warn ships of that reef while also pointing the way to Norwalk Harbor. With the light being put at Peck Ledge, it was feared that ships approaching from the east would be fooled by the light and end up running aground on ledges and rocks around the light before they got as far as the harbor entrance.

In any case, it was too late by that time to change the site, and construction continued. The structure was a spark plug type design that was typical of the time: a cast-iron foundation assembled on shore, floated to the site, sunk into place in seven feet of water and filled with concrete. A cast-iron superstructure was placed on the foundation, with the lantern room sixty-one feet above the water. This type of construction was cost-efficient and provided the best protection against waves and winter ice floes for offshore light stations.

The foundation cylinder was sunk in place on May 30, 1905, and 250 bags of mortar placed inside it after it was leveled. Work was halted in July 1905 due to the non-delivery of the metalwork for the superstructure, and the completed foundation was covered over at this time and equipped with a temporary light. The temporary cover was removed in March 1906, and the assembling of the superstructure commenced. The first two stories of the tower were bolted together that March, and over the next four months, the tower was completed, painted, and surrounded with a protective ring of riprap. The station went into operation in 1906 with a fourth-order Fresnel lens showing a two-second white flash every ten seconds.

The interior of the lighthouse was lined with brick and included a basement and three floors for living space and storage that were topped by a wood-lined watchroom and the cast-iron lantern room above that.

On February 17, 1913, Keeper Conrad Hawk, while preparing to tar some lobster trap funnels, set a tub of hot tar on a newspaper near the stove in the kitchen. He then noticed that a post lantern nearby at Grassy Hammock was not working, and set out in his rowboat to adjust it. On his way back to the lighthouse, Hawk saw smoke pouring from the windows. He tried to smother the fire with a blanket, but the heat was too intense. Finally, he managed to drag the tub full of tar across the floor with a clam rake and knock it out the window into the sea. Climbing up the outside wall to an upstairs bedroom, Hawk retrieved a heavy blanket, which he draped over the kitchen window to reduce the draft feeding the fire. Using a bucket and rope to draw seawater, he was then able to douse the remaining flames.

Keeper Charles Kenney, who was in charge of the lighthouse in the early 1920s, was recognized on at least five occasions for rendering assistance to people in distress. In 1922, Kenney and his two assistants were recognized for rescuing four men drifting in a small boat from the sunken steamer J.C. Austin. The men, who were suffering severely from exposure, were taken back to the lighthouse where they were given medical attention, clothing, food, and shelter before being taken ashore to a hospital by an oyster steamer.

In August 1923, a captain of a Red Star barge purchased a launch in Stamford and was sailing it back to his barge in Westport when the launch began to leak. When he was near Peck Ledge, the captain became too exhausted from the constant bailing of water and began waving his arms back and forth over his head as a distress signal. Keeper Kenney noticed the man and set off in the stations launch to help. After taking the fatigued captain aboard, Kenney towed the launch to Westport, where the captain promptly sold it to a colored man for seventy-five dollars.

Peck Ledge Lighthouse was automated in 1933, despite vocal protests from local citizens. The light continues to operate today, although it is sometimes difficult to see with the competition from the bright lights of nearby Calf Pasture Beach. The structure is well preserved, although there was a problem with birds frequently nesting inside the building, entering through windows broken by vandals.

The crew of the Coast Guard buoy tender Redwood refurbished Peck Ledge Lighthouse twice in the 1980s. In 1980, the crew replaced the light and power source, sealed the tower, and removed the outhouse and some unnecessary trimming for which it received a Coast Guard Meritorious Unit Commendation. In 1989, the Redwood crew sandblasted and repainted the caisson, cleaned and repainted the interior, and removed the light from the upper gallery and returned it to the lantern room. The lighthouse is reachable only by a fifteen-foot outside ladder, making access difficult for Coast Guard maintenance crews. When seas are flat, a boat can be tied directly to the ladder, but if theres any swell at all crew members must be dropped off one at a time, a sometimes-hairy process.

In 2004, the Coast Guard said that it plans to put 100 tons of granite riprap around the east side of the tower, and some step-cut stones on the west side to make access by boat easier for maintenance crews.

In May 2014, Peck Ledge Lighthouse, deemed excess by the Coast Guard, was made available under the guidelines of the National Historic Lighthouse Preservation Act to eligible entities defined as Federal Agencies, state and local agencies, non-profit corporations, educational agencies, or community development organizations, for education, park, recreation, cultural, or historic preservation purposes. When a new custodian was not found, an online auction for the lighthouse opened in July 2015 and closed on September 15, 2015 with a high bid of $235,000. A total of six bidders participated in the auction, and the winning bidder was Lighthouse Preservation Group, LLC.

Located just over two miles offshore from Calf Pasture Park, which is found at the eastern side of the entrance to Norwalk Harbor.
Latitude: 41.07735, Longitude: -73.36993

For a larger map of Peck Ledge Lighthouse, click the lighthouse in the above map.

This light is best seen by boat, but distant views are possible from Calf Pasture Park. Cruises that pass by Peck Ledge Lighthouse are offered by The Maritime Aquarium at Norwalk.