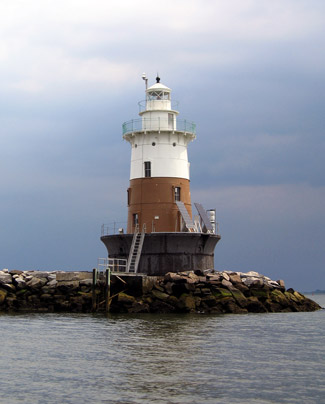 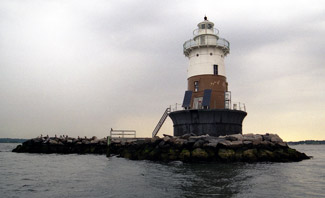 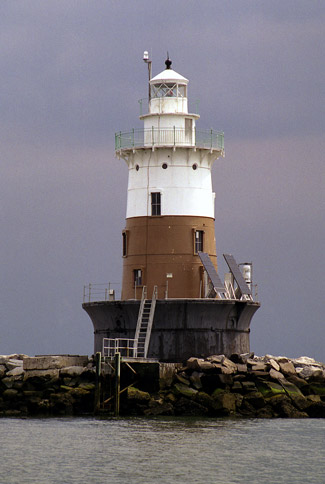 Legend has it that Greens Ledge was named after a pirate Green, who sailed with the infamous Captain Kidd. When Green was captured by authorities of the day, he was reportedly executed and his body fastened to the ledge in chains as a dire warning to others thinking of entering the buccaneering trade. Years later, a lighthouse would be established on the ledge as a warning to vessels seeking to enter Norwalk Harbor.

Although severely damaged by fighting during the Revolutionary War, Norwalk, Connecticut became a bustling center for shipbuilding, manufacturing, and commercial fishing after the conflict. In 1826, Sheffield Island lighthouse commenced operation in Norwalk Harbor, but as the size and number of ships calling at Norwalk increased, additional navigational aids were needed. In 1896, the Lighthouse Board recommended that a lighthouse be placed on Greens Ledge, at the western end of a long and dangerous shoal extending from Sheffield Island. The construction of Peck Ledge Lighthouse just to the north of Sheffield Island was proposed at the same time, along with the placement of five post lanterns to mark the shipping channel in the harbor.

Congress provided $60,000 for construction of Greens Ledge Lighthouse in an act approved on March 3, 1899, and the Lighthouse Board announced that sealed bids for the necessary metalwork and for the erection of the tower would be received until August 7, 1900. Philadelphia Construction Company was selected as the contractors for the work at a cost of $29,780, and they sublet the construction and erection of the cast-iron foundation cylinder to the Bing Foundry & Machine Company of Philadelphia.

The following description of the lighthouse appeared in the specifications for the project:

The structure will consist of a circular foundation pier, supporting a four-story circular dwelling, a veranda with boat davits, a circular parapet, and a circular lantern. The foundation pier is a cast iron cylinder open at both ends and trumpet shaped at the top. The lower portion of the structure is a single block of concrete and contains the water cisterns. The upper portion is to be lined by a brick wall, and its interior space  the cellar  is to be divided by one circular and a number of straight brick walls into various compartments for the storage of oil, fuel, provisions, &c. The annular space between this brick lining and the circular wall is covered by brick arches carrying the main gallery floor. The main gallery, which will be accessible from the water by ladders, is to be covered by an iron roof and surrounded by hand rails, which, like the boat davits, are to be attached to the columns supporting the gutter on the outer edge of the roof. The iron dwelling will have the form of a frustum of a cone. It will rest upon the circular wall of the cellar and is to be divided into four stories by four iron floors, supported by the brick lining of the house and center columns. The dwelling is to be covered by an iron gallery floor carrying the parapet, the watch room floor, the lantern gallery, and the lantern. A spiral stairway of iron will lead from the cellar to the different floors. A fog signal plant, actuating a Daboll trumpet placed on the main gallery, is to be installed in the cellar.

The foundation cylinder is just over thirty-nine feet tall, while the tower is thirty-two feet tall and tapers from a diameter of twenty-one feet at its base to seventeen feet at the lantern room.

The foundation cylinder was placed on the mammoth floating derrick Century on the afternoon of May 21, 1901, and early the next morning the derrick was towed out to Greens Ledge and the cylinder was sunk in place. By July 28, 1901, the foundation had been partially filled with concrete and lined with brick. The first and second courses of the tower were set on August 9 and 10, and the entire work was completed on October 31, 1901. Some 1,500 tons of riprap were placed around the tower for protection, and the Diaphone fog signal plant, consisting of two five-horsepower oil engines and two air compressors, was installed in January 1902.

A temporary fifth-order lens, which produced a red flash every fifteen seconds, was installed in the lantern room on February 14, 1902 and placed in operation the following day. No longer needed, the nearby lighthouse on Sheffield Island was discontinued. The temporary fifth-order light served until mid-May when a fourth-order lens was installed, changing the characteristic of the light to a fixed white light varied every fifteen seconds by red flashes. The fog signal sounded three-second blasts separated by alternate silent intervals of two and thirty-two-seconds and was typically in operation about 400 hours each year.

Iron towers proved to be an efficient and low-cost method of building offshore lighthouses. Most of these spark plug lighthouses were located in the Northeast and Mid-Atlantic States, although there was at least one in Texas (Sabine Bank, which was demolished in 2002). Offshore lights such as these required constant and vigilant maintenance, and so before the recent interest in lighthouse preservation, deactivated stations were quickly torn down. Even today, those wishing to restore and maintain a spark plug lighthouse face a daunting task, since the iron buildings rust and deteriorate quickly if they are not regularly painted. The lighthouses are also exposed to constant waves, ice in the winter, and even an occasional bump by a ship, which all take their toll on the structures.

On March 1, 1910, Keeper John Kiarskon took the stations only skiff and went ashore, leaving Leroy C. Loughborough, his assistant, in charge of the light. Keeper Kiarskon was supposed to be gone for just a few hours, long enough to cash Loughboroughs $49.69 paycheck and procure some supplies, but he never returned to the station. Instead, Kiarskon cashed his assistants paycheck, checked into a local hotel, and went on a drinking binge.

Left alone, Loughborough dutifully minded the light, and when fog settled in for nearly four days, he was forced to operate the fog signal too and go without sleep for most of that time. Loughboroughs only companion was his dog, and when supplies got low, the two subsisted on half rations until they split the last stew of meat and vegetables on the ninth day. The small sloop Tecumseh finally noticed something was wrong with the light and reported the matter. The lighthouse tender Pansy, under the command of John Haywood, set out for Greens Ledge, where Haywood found Loughborough unconscious on the floor near the fog signal with his faithful dog curled up beside him.

Loughborough later spoke about his eleven-day ordeal on Greens Ledge, during which his only drink was boiled saltwater:

I feel ten years older and my hair has grown gray. I would not go through that experience again for the United States mint. Several times I inverted the flag on the mast, intending to attract the attention of some passing boat and thereby escape to the mainland, but the greater part of the time it was so stormy or foggy the signal could not be seen. Each time I would take it down, determined to stick it out to the end. I was almost out of my head from the strain. It would not have been so bad save for the awful fog which made me keep at the engines night and day. It is well that the Pansy came when she did. I don't think that I would ever have moved from that rug.

Loughborough was taken to his fathers home at Point Judith, Rhode Island, where he fought to regain his health for nearly a year before passing away in February 1911 at the age of twenty-seven.

Keepers at Greens Ledge participated in numerous heroic rescues of the victims of boating mishaps in the waters surrounding the station, but one assistant keeper named Frank Thompson found himself in a life-threatening situation one cold winter afternoon in 1917. Thompson had taken a rowboat to shore to get supplies. He left on his return journey at about 1:00 p.m., but was delayed by being forced to detour a number of times around ice floes in the harbor. As darkness approached, Thompson realized that he was still only halfway to the lighthouse, and he became trapped inside a large ice field, drifting with the tide toward open sea.

Fortunately a resident of South Norwalk named Charles Mills had been watching Thompsons predicament from the shoreline and made some quick calls to the Lighthouse Service and local port authorities. The harbor was completely covered in ice by that time, preventing most vessels from leaving the harbor. The Bridgeport Towing Company was finally convinced to send a tug out to try to rescue Thompson, but only after collecting a $50 fee for the service. At 10:30 p.m. the tug located the cold and hungry keeper and returned him to Greens Ledge.

Over time Greens Ledge Lighthouse settled and began tilting to the point where personnel stationed there complained that the vibrating generators located in the lower portion of the tower caused the furniture to dance across the room to its lowest point. The keepers adapted to the situation by placing the furniture at the lowest point of the room, but the resulting arrangement definitely violated all rules of Feng Shui.

The Coast Guard automated the light and fog signal in the 1972, but even today a weekend sailor occasionally runs aground on the shoal between the two lighthouses at Greens Ledge and Sheffield Island. The large boulders in the area around Greens Ledge are a favored home for lobsters and blackfish, and so also a favorite place for fishermen and divers.

Greens Ledge Lighthouse was placed on the National Register of Historic Places in 1990.

In May 2015, Greens Ledge Lighthouse was declared excess to the needs of the United States Coast Guard and made available to eligible organizations under the provisions of the National Historic Lighthouse Preservation Act of 2000. Qualified entities were given sixty days to submit a letter of interest and were required to obtain a lease/license for legal occupancy of the submerged land from the State of Connecticut. After no suitable organization was found, the General Services Administration initiated an online auction for the lighthouse on June 10, 2016. Four bidders participated in the auction, which closed on September 5, 2015 with a high bid of $130,000.

Tim Pettee, a hedge fund manager, met Brendan McGee, a fellow Rowayton resident and restaurateur, during an inspection of the lighthouse offered as part of the auction and decided to team up to purchase the lighthouse. In April 2017, Greens Ledge Light Preservation Society, a nonprofit organization established by a group of local residents including Tim Pettee, Alex Pettee, Brendan McGee, and Shannon Holloway officially assumed ownership of the lighthouse. The $150,000 needed for the acquisition was made through a founding donation by the Pettee Family.

Located one mile south of the entrance to Five Mile River at Rowayton, and just over a mile southwest of Sheffield Island.
Latitude: 41.04165, Longitude: -73.44393

For a larger map of Greens Ledge Lighthouse, click the lighthouse in the above map.


Greens Ledge Lighthouse can be seen in the movie, "The Thomas Crown Affair," when Thomas Crown is racing his catamaran on Long Island Sound. The view is brief, and others have thought it is Robbins Reef Lighthouse, but the foundation type, caisson versus rock, can be used to distinguish the two lights.