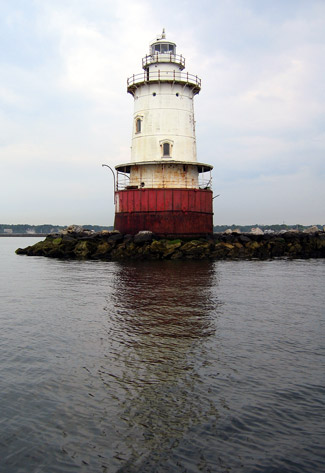 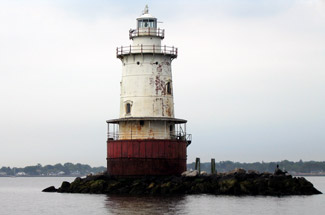 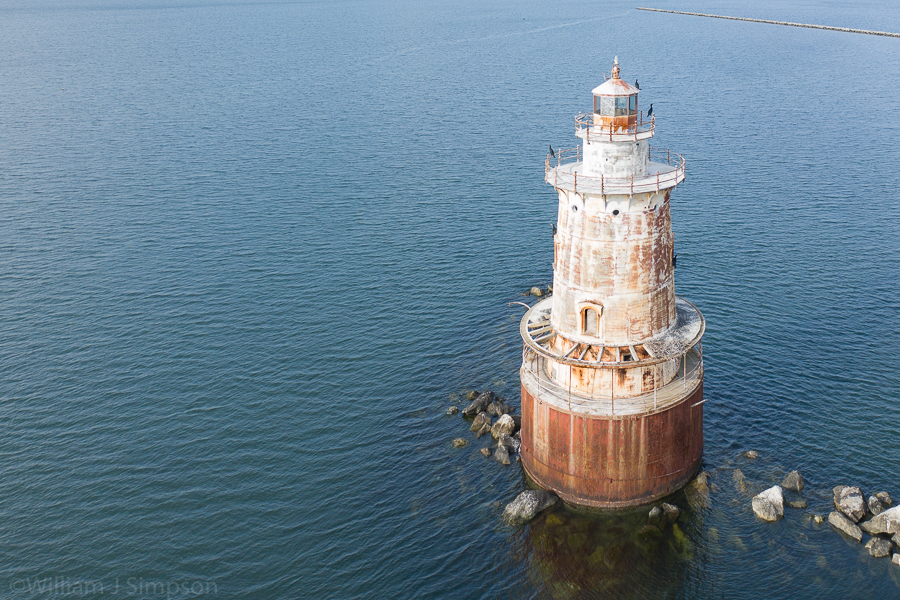 Stamford, Connecticut has a long history, with European occupation dating back to 1640, when early colonist Nathaniel Turner used trinkets to purchase a large area on the Rippowam River from the local natives. Although the area is one of the earliest places in the U.S. settled by European colonists, the first lighthouse wasnt placed at Stamford until the relatively late date of 1882.

By the 1870s, Stamford was crowded with a wide variety of ship traffic carrying all sorts of goods for the local economy. On March 9, 1871, an article in The Sabbath Recorder, noted:

Stamford Harbor is the most dangerous harbor on the Connecticut coast, and a petition is circulating in that town applying to the Lighthouse Board for the erection of a lighthouse on the reef known as Harbor Ledge, and the placing of buoys and spindles on the most dangerous rocks.

Lighthouse Board officials visited the area in 1871 and recommended a day beacon on the ledge and a lighted beacon on the opposite side of the channel leading to the harbor, but it wasnt until 1881 that Congress appropriated $30,000 for construction of a lighthouse. The site chosen was Chatham Rocks, about two-thirds of a mile offshore. Similar to a number of other lighthouses in the region, the new structure was a cast-iron tower set on top of a cylindrical cast-iron caisson. The sections were made at a Boston foundry, brought to the site, and bolted together there. With the completion of the structure, the Lighthouse Board announced, on and after Feb. 10, 1882, a fixed red light of the fourth order will be exhibited from the lighthouse recently constructed on Harbor Ledge, Stamford Harbor, Conn. The apparatus lights the entire horizon, and the focal plane is 60 feet above mean low water. Besides the light, the tower was also equipped with a fog bell struck by machinery.

Even by the reduced standards of lighthouse towers, the Stamford Harbor structure was considered especially cramped and uncomfortable and was not a favorite of the keepers assigned there. The first keeper, Neil Martin, asked for a transfer after only ten months. Nahor Jones, the second keeper, made a concentrated effort to create a homelike atmosphere at the lighthouse for his family. He moved all of their furniture and other belongings out to the site, built a dock and a chicken coop, and settled down to a cozy routine. Unfortunately, a strong northeaster came along soon after and swept the chicken coop, the dock, and the boat out to sea. The family returned to live on shore, and for the rest of his service Jones commuted to work from shore by rowboat.

In an interview conducted for a newspaper in 1908, Keeper John J. Cook eloquently explained how for him spending Christmas at the lighthouse was a religious experience.

I dunno, it is pretty lonesome out here sometimes, especially in winter, but we manage to enjoy our holidays. We cant go to church on Christmas, and we miss the nice music and the fine sermons, but there is a compensation for that. What more soul-stirring music could there be than that of wind and wave as they whistle and roar or moan and swish past our little home?

And that light up aloft is a sermon in itself. Many a fervent Thank God, many a heart-deep prayer has gone up, maybe from people who wouldnt be thinking of such things ashore, when the red gleam of Stamford Light was made out in a storm or the bell heard in a fog. My little light has its mission just as your pulpit preacher has his; and no one who was watched it through the terrible winter storms can fail to appreciate this, and with it his responsibility. Human life, yes, human souls depend upon that light Christmas and every other night of the year, and I dare guess its compensation for the loss of a Christmas sermon to keep the light burning steadily.

Keeper Cook had made the local paper earlier in 1908, when he was trying to return to the lighthouse with his wife, who had been recuperating on shore for two weeks. It was late afternoon when the couple started for the lighthouse, and as they approached the tower the launchs engine broke down. The boat drifted onto rocks, and in trying to free it, Keeper Cook lost his only oar. With no means of propulsion, the boat was tossed about Long Island Sound all through the stormy night. Shortly after daybreak, members of the Eatons Neck lifesaving crew spotted the helpless craft and rescued the couple, who had nearly perished from exposure.

When Keeper Cook lost his oar and realized his predicament, he yelled Keep the light burning to his elderly mother-in-law, Laura Weickman, who was standing on the towers balcony, eagerly awaiting the couples return to the lighthouse. Laura later described her experience alone in the lighthouse:

I have always been afraid of the sea, being country bred, and the storm on the two nights I was alone in the lighthouse was one of the worst ever known on this coast. Every wave made the tower shake and tremble from top to bottom. I couldnt find a spot where it didnt feel as though the house was just going to tumble down into the sea. I could have stood all this well enough, but I was sure I had seen my daughter and son-in-law drown before my eyes, and I could do nothing for them, not even give an alarm.

I couldnt eat or sleep. I tried to read from my Bible, but every few minutes I had to spring up when a big wave shook the tower, for fear we were actually tumbling down. Twenty times, I think, I went out on the platform and looked for the skiff, hoping against hope that I would hear by son-in-laws voice hailing me from the water.

At least I had the light to keep my mind busy.

Laura kept the light faithfully burning for two nights. Keeper Cook tried to return to the tower after the first night, but was unable to make a landing, and Laura was unable to hear his message that her daughter was all right. The storm finally subsided on the third day, and Keeper Cook made his way out to the lighthouse to relieve his mother-in-law. No, I dont like the sea, Laura later said. The loneliest farm is not so lonesome as a lighthouse.

Keeper Cook wasnt the only keeper to have difficulty reaching the lighthouse. On August 27, 1913, Keeper Joseph Meyer went ashore for provisions and was unable to land at the lighthouse due to high seas. Three Stamford yachtsmen noticed the light was out and put out in a small powerboat at considerable risk to reach the lighthouse. After forcing open a window, the men entered the tower and had the light functioning my 1 a.m. Keeper Meyer was so exhausted after his efforts to reach the lighthouse that he fell asleep on shore and didnt wake up until broad daylight.

Before marrying Rocco Roina, Hazel Iten spent part of her childhood at Warwick Lighthouse in Rhode Island and Stamford Harbor Lighthouse, where her father, Edward Iten, served as keeper. In January 1927, Hazel was visiting Stamford Harbor Lighthouse, when her husband arrived on Southfield Point and waved a signal to attract the attention of those at the lighthouse. After seeing the signal through marine glasses, Hazel rowed ashore accompanied by her younger brother Charles and younger sister Florence. Rocco demanded that Hazel return immediately with him to their home in Greenwich, and when Hazel insisted that she wasnt properly dressed for the trip and that the couple should return to the lighthouse first, Rocco shot his wife dead and then took his own life with the revolver. The couple must have been having marital problems as Hazel had taken refuge at the lighthouse and didnt want to return to her home.

Raymond F. Bliven was appointed keeper of Stamford Harbor Lighthouse in 1930, shortly after having separate from his wife. On the evening of August 13, 1931, Keeper Bliven set the light going and then rowed to shore to meet a friend for dinner. Bliven started back to the lighthouse about 10:30 that night, but an investigation into his whereabouts was launched when the light burned steadily all the next day and then went out the following night. The harbormaster found the lighthouse empty, and the lighthouse tender Spruce was sent to conduct a search for the missing keeper.

The crew of the Spruce found a small overturned boat about a quarter mile from the lighthouse, and a local yachtsman found Blivens badly bruised body on August 15, roughly a half mile from where the boat was found. Blivens death was ruled an accidental drowning, and it is believed that he slipped and fell back into the stations boat while attempting to climb the ladder up the side of the lighthouse. As Bliven was a good swimmer, he was likely knocked unconscious by the fall.

In 1949, the Coast Guard held public hearings on the possible closure of Stamford Harbor Ledge Lighthouse. Although the local maritime community protested loudly, the station was put out of service in 1953 and the property offered for sale. The mayor of Stamford persuaded the government to transfer the lighthouse to the city in exchange for a promise to use it as a historic site for at least twenty years, but the city failed to maintain the site and returned it to the government eight years later.

In 1967, three Stamford men bought the abandoned lighthouse at auction for $10,100 to make quite certain that it remains a great landmark to Stamford and the Stamford Yacht Club. After going through several owners, the tower was resold in 1984 for $230,000. (The title to the lighthouse reportedly came with rights to ten acres of surrounding land  unfortunately, it was all underwater!)

The new owner was Eryk Spektor, Chairman of the Board of First Womens Bank, who spent $300,000 putting in a new kitchen, modernizing the heating and electricity, painting and paneling the exterior and interior, and constructing a small breakwater and dock for his personal yacht. Unfortunately, Spektors wife had an extreme dislike of boats and dreaded the fifteen-minute journey to and from the lighthouse. As a result, Mr. Spektor never spent a night in his expensive second residence.

Today, the lighthouse functions as a private aid to navigation.

For a larger map of Stamford Harbor Lighthouse, click the lighthouse in the above map.

This light is best viewed from the water, but it can be seen from points along the shore in Stamford.