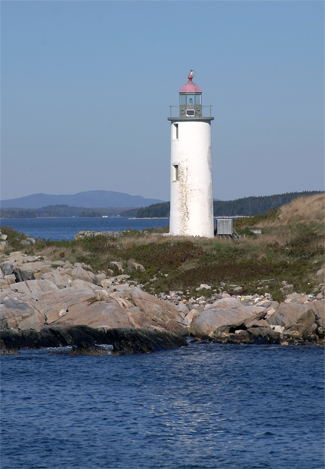 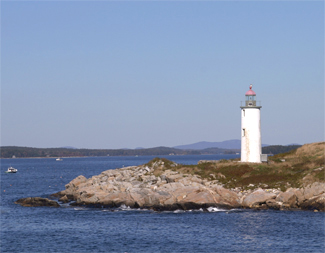 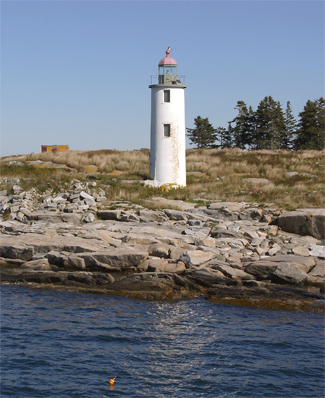 As part of his 1842 report on the state of lighthouses in New England, I.W.P. Lewis included the following on Franklin Island Lighthouse:

Franklin Island light is in the center of St. Georges River bay, one of the most dangerous localities on the coast of Maine, owing to the great number of dry and sunken ledges that swarm in every direction. The light indicates the entrance to the St. Georges river and several adjacent harbors formed by the numerous islands. It is believed, however, that if this light had been placed on one of the Egg rocks, lying about three miles exterior to it, much greater service would have been rendered to the navigation generally.

In 1806, the Commonwealth of Massachusetts ceded jurisdiction over twelve-acre Franklin Island to the U.S. Government, and contractors Benjamin Beal and Duncan W. Thaxter, who also built the first lighthouse on Whitehead Island, began construction of a wooden tower and keepers dwelling on the north end of the island for $3,150. When first exhibited in 1807, the towers fixed white light had a focal plane of fifty feet above the surrounding sea. The lighthouse was just the third to be built in what is now the State of Maine.

John Lowell, the lights first keeper, remained at the station for twenty-three years and nearly saw the erection of the islands second lighthouse, which was built by Ezekiel D. Demuth in 1830. The new tower was built of rubblestone and exhibited the light of ten lamps, set in thirteen-inch reflectors, which were attached to two circular iron frames, one above the other. As part of Lewis 1842 report, Keeper James T. Hanna, who had been appointed keeper in 1841 at an annual salary of $350, gave the following statement:

This light-house was erected in 1830 and my father kept it from that time until I succeeded him, a year ago. The tower is built upon a ledge, and of rubble masonry. Owing, as I believe, to the want of good mortar or cement in the original structure of it, it now leaks in all directions, while the walls are open at the points of the stone work and the mortar appears to be merely wet with sand. I painted the interior wood work, stair case, &c., recently, and a heavy shower, which occurred soon after, leaked through the deck, and washed half the paint off the staircase. The lantern leaks at the points, and always has done ever since it was put up, which fact has been duly reported from time to time, but no repairs have been made, save what I or my father have done. The deck is open at its joints and the eaves where the worst leaks exist. My reflectors are pretty well worn out, and have lost all their polish.

My dwelling-house is, if anything, worse than the tower; it leaks all over the roof and in the walls, and my family suffer exceedingly from this cause  all the rooms being wet and damp. The parlor we cannot make use of, from the quantity of water in it after every rain storm. One of the chimneys was blown down on the 4th October last, and has not been rebuilt.

As if the condition of the tower and dwelling didnt make life miserable enough at the station, the cistern in the dwellings cellar was so rotten that it fouled the stations water, and the boatways had been destroyed in a gale the previous February, preventing the use of the stations boat.

Things hadnt improved any in 1853 when Inspector W. B. Franklin recommend that the lighthouses on Franklin Island and Baker Island be rebuilt. The towers of both are entirely worthless, the lanterns are worn out, and the keepers dwellings are so old and leaky that they are unhealthy, wrote Franklin. I select these two lights, not because they are absolutely the worst on the coast, but because a beginning must be made in rebuilding nearly all of the lights of this class on the coast; and these are important lights, and are as bad as any.

Following an appropriation by Congress on August 3, 1854, the circular brick towers that remain standing on both Franklin Island and Baker Island were completed in 1855 and equipped with fourth-order, revolving Fresnel lenses. The diameter of the tower is twelve feet at the base and tapers to eleven feet at the parapet, while the thickness of the walls reduces from two feet at the base to eighteen inches at the lantern room.

A service room on the north side of the tower linked the lighthouse to a six-room, one-and-a-half-story dwelling. An ell was added to the dwelling in 1897. Other structures at the station included a redbrick oil house built in 1895, a woodshed, and a barn. In 1887, a channel was blasted in the rock to drain the low ground near the lighthouse that would flood the cellar in the keepers dwelling.

George D. Pottle served as keeper at Franklin Island from 1888 to 1900, and during that time he volunteered to help protect endangered birds on neighboring islands. His actions were noted in a 1901 edition of The Auk, the quarterly journal of The American Ornithologists Union.

Captain Geo. D. Pottle, Keeper of the Franklin Island Lighthouse, protected the terns on three small islands near him, viz., Eastern and Western Egg Rock and Shark Rock; he estimates that at the end of the season there was an increase of one thousand pairs in the three colonies. He reports trouble with only one party who was after birds and he was prevented from getting any by the vigilance of Mr. Pottle. On ten occasions persons were prevented from taking or destroying the eggs; he states that the people are about evenly divided in sentiment as to whether the birds should be protected or not. Some persons believe that all wild things are given to man to be used or abused as the individual sees fit. The Committee finds this view largely obtains along the whole coast, although the agitation during the past few years regarding bird protection is gradually developing a change of sentiment.

Robena Beal Smith was born while her father Vinal Beal was serving as a keeper on remote Mount Desert Rock. Six years later, in 1919, Keeper Beal was transferred to Franklin Island, where Robena suddenly found herself with only her siblings as playmates, unlike at Mount Desert where she enjoyed the companionship of the other keepers children. You had to entertain yourselves and use a lot of imagination, Robena recalled. One of her favorite pastimes was taking long-stemmed lobster trap buoys and pretending they were her little children. Sometimes we dressed them and walked them around, she said.

George E. Woodward served as keeper from 1924 to 1926. On January 9, 1925, Keeper Woodward heard a distress signal and went to the assistance of a fishing party marooned near the station. Woodward provided food for the men and loaned them a boat so they could get ashore. These actions were considered especially meritorious as Keeper Woodwards health was poor at the time and practically incapacitated him from duty.

Keeper Woodwards son, Coleman George Woodward, recalled that the keepers were given twenty-eight vacation days each year, and that he was often called on to fill in while they were on vacation. Franklin Island was five miles offshore from the Town of Friendship and had no telephone, so if the station needed assistance they would fly the flag upside down from the tower. Once when Keeper Woodward was severely sick with the flu, the family flew the distress signal. After two-and-a-half days without receiving any response, the flag was lowered as Keeper Woodward had recovered sufficiently to resume his duties.

In 1933, the light on Franklin Island was converted to an automated acetylene gas apparatus, and the station was destaffed. All the structures on the island save the tower and oil house were burned. The fourth-order Fresnel lens was later removed from the lighthouse and placed on display at Coast Guard Station Boothbay Harbor.

Keeper Pottle would likely be pleased that his island home was transferred to the U. S. Fish and Wildlife Service in 1973 and is now Franklin Island National Wildlife Refuge, supporting nesting gulls, eiders, black-crowned night herons, and Leachs storm petrels. As such, the island is closed to the public during the nesting season that runs from April 1 to July 31.

In 1999, the Coast Guard licensed Franklin Light Preservation Inc. to care for the lighthouse. According to Michael Zuromskis, president of the nonprofit preservation organization, the Coast Guard approved the rebuilding of a pier on the island and requested a helipad be constructed for emergency search and rescue operations. These improvements were added in 2001, but two years later, the states Department of Environmental Protection ordered that the pier and helipad, which cost $50,000, be removed as they unreasonably harm significant wildlife habitats. The preservation group had assumed that since the Coast Guard had jurisdiction over the property no permit was needed, but any structure erected in coastal wetlands requires a state permit, even those placed on federal lands.

For a larger map of Franklin Island Lighthouse, click the lighthouse in the above map.

This light is best seen by boat. We viewed the light from aboard a private charter with Sea Ventures Charters out of Port Clyde. The island is closed to the public from April 1 through August 31.

The lighthouse is owned by the Coast Guard but leased to Franklin Light Preservation, Inc. Grounds open, tower closed.