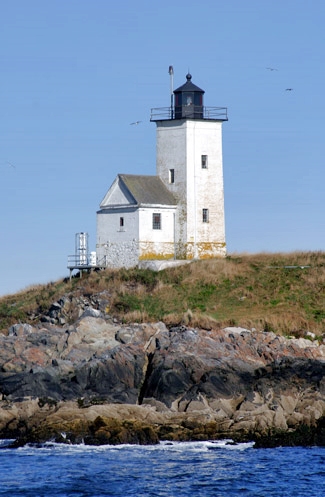 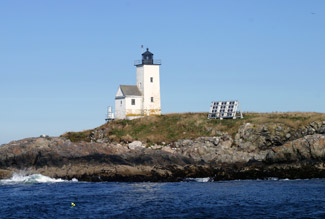 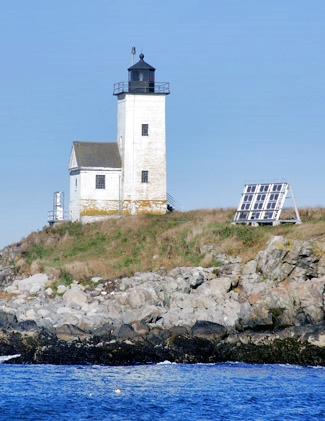 Named for its two bushes that served as a natural landmark for mariners, Two Bush Island has long been an important spot along the Maine coast. [The 1806 edition of the American Coast Pilot noted that the round barren island had by that time lost one of its two bushes.] Numerous shipmasters, ship owners, and residents of nearby Vinalhaven Island petitioned Congress in 1872 for a light on Two Bush Island, declaring that they would be very much benefited by such an aid. In a report twenty years later, the Lighthouse Board noted that the important waterway of West Penobscot Bay had two entrances from the south: Muscle Ridge Channel and Two Bush Channel. Of these two, Muscle Ridge Channel, which lies near the mainland and is marked on the south by Whitehead Island Lighthouse and on the north by Owls Head Lighthouse, was the straightest and most used. The steamers of the Boston and Bangor line traversed Muscle Ridge Channel twice each day and those of the Maine Steamship Company four times a week, but in times of fog, the channel was choked with vessels at anchor, making navigation perilous.

The keepers at Whitehead Island noted that during the spring of 1892, 6,853 vessels had passed through Muscle Ridge Channel, marked by lights and fog signals, versus 3,931 for Two Bush Channel, which lacked any navigational aids. As numerous vessels were using the wider Two Bush Channel, which required two changes of course, the Lighthouse Board recommended that Congress provide $19,000 for a light and fog signal on Two Bush Island to mark one of the turning points.

Congress appropriated the requested amount on August 18, 1894, but as it proved impracticable to buy the island, measures were taken to obtain title through condemnation proceedings. Under a $12,250 contract awarded to W.H. Glover Co. of Rockport, a square, brick tower was constructed atop a stone foundation near the southwest end of the island, while a double frame dwelling was built forty feet northeast of the tower, and a boathouse was placed on the northwest end of the island. The revolving fifth-order Fresnel lens installed in the towers lantern room first sent out its signature of a white flash every five seconds on November 10, 1897. Attached to the base of the tower was a brick fog signal building, which housed a clockwork mechanism and 1,400-pound weights that once wound up, could toll a fog bell for three-and-a-half hours. The stations 4,188-pound fog bell was mounted on one face of the fog signal building and was struck two blows every twenty seconds when needed.

A winter gale in 1902 drove the fishing schooner Clara Bella onto the rocks near Two Bush Lighthouse. Captain Pulk and his crewman George Samuels cried for help, but the pounding surf made it impossible for Keeper Aldiverd A. Norton, the first keeper of Two Bush, to hear them. Keeper Nortons dog Smut, however, picked something up with his sensitive ears. After discovering the source of the sounds, Smut raced back to the lighthouse and, with his barking, alerted his master that something was amiss outside. The two sailors had climbed into the ships dory and were trying to make their way to the lee side of Two Bush Island when Norton spotted them. Keeper Norton waded out into the frigid water, threw a coil of rope to the men, and, after the sailors had securely tied the rope about themselves, pulled the men to shore with the help of his assistant. When the two sailors learned that they owed their lives to Smut, they fell to the ground and hugged the dog. Later, they offered to buy their rescuer, but Keeper Norton wouldnt sell his beloved companion and bird dog at any price.

The intensity of Two Bush Light was increased in 1902 through the installation of a fourth-order lens in the tower. The lighthouse had a red daymark until the spring of 1914, when it was painted white to improve its visibility.

Keeper Leland Mann, who came to the island as an assistant in 1919, always kept an eye on the vessels passing the station, and in 1922, he rescued a man in a stalled motor boat that was drifting out to sea before a strong wind. The following year, the Lighthouse Service Bulletin noted five acts of assistance rendered by Keeper Mann, each being just a little bit different. One involved a sick captain, another an exhausted man in a rowboat, the third, a rowboat that had gone adrift, the fourth, a yacht short of fuel, and the final one a disabled launch.

Keeper Manns wife died in 1926, and the same year he fell on the boat slip, breaking his hip. Leland was made head keeper in 1927 and held this title until his retirement from the island in 1933.

On Thanksgiving Day 1910, Fred Batty married Florence Cavanor, daughter of Samuel Cavanor, keeper of Ram Island Lighthouse. The festivities were celebrated on Ram Island, where besides turkey, the Thanksgiving feast featured an amazing sixty-five lobsters. Fred eventually followed in his father-in-laws footsteps and was appointed second assistant keeper at remote Saddleback Island Lighthouse in 1918. He was promoted to first assistant keeper the following year but resigned not long after that and returned to the grocery business in Portland. Thirteen years after leaving Saddleback Ledge, Fred decided to give lightkeeping another try during the depression and was sent to Boon Island Lighthouse in 1930. Two years later, Fred and his family moved to Two Bush Island, where Fred was the assistant keeper for a decade, before spending two years as the stations head keeper.

Fred and Florence had six children, who ranged in age from twenty to just three when the family moved to Two Bush Island. Thorton, who was ten at the time of the move, had fond memories of island life.

We had all kinds of games we made up. And I had my pal, my Collie dog, and the cat named Mittens, because she had white front paws. And there was a flock of about twenty-five chickens. But the best thing was Cecil, my pet seal. I spent most of my time along the shore or in my fourteen-foot skiff. I was out hauling lobster traps when this young seal, grayish and about thirty inches long, came alongside. I held him under until he was winded and then took him in. He ate just about anything. He ate more doughnuts than I did.

The children were boarded out during the school year at first, until the family could afford to buy a home in Spruce Head, but they always returned to the island for vacations and during the summer. One of Thortons jobs was taking care of the familys cow on Two Bush. You could have fed three cows there, there was so much grass. When it was time to breed her, Id wait for low tide when my fourteen-foot boat was grounded out, and lead her into the boat and tie her to the seat with her halter. The only place on the shore where I could get her into the skiff was at the north end of the island. There was no way she would agree to walk down the ramp at the boathouse. She stood up the whole trip ashore while I rowed. It must have been quite a sight to see this cow in a skiff crossing the Muscle Ridge Channel.

Two Bush Lighthouse was automated in 1964, and its keepers removed  no longer could mariners rely on a keeper or his dog to come to their rescue. The Coast Guard allowed the U.S. Armys Green Berets to blow up the keepers duplex as a demolition exercise in 1970, after bids for removing the structure exceeded the budgeted amount. The force of the explosion not only brought the dwelling down but also broke panes of glass in the lighthouses lantern room and cracked its brick walls. One piece of Two Bush Lighthouse survives on the mainland  its fog bell hangs in the belfry of the Spruce Head Community Church in Spruce Head, Maine.

Ownership of the lighthouse was transferred to the U.S. Fish and Wildlife Service in 1998, and Two Bush Island is now part of the Maine Coastal Islands National Wildlife Refuge. As such, the island is closed to the public during the seabird-nesting season, which runs from April through August. The light was converted to solar power in 2000.

For a larger map of Two Bush Lighthouse, click the lighthouse in the above map.

The lighthouse and island are owned by the U.S. Fish and Wildlife Service and are part of Maine Coastal Islands National Wildlife Refuge. Grounds closed during seabird nesting season, tower closed.