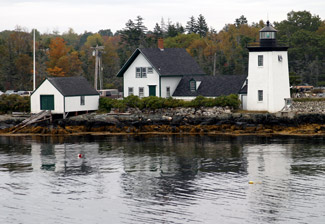 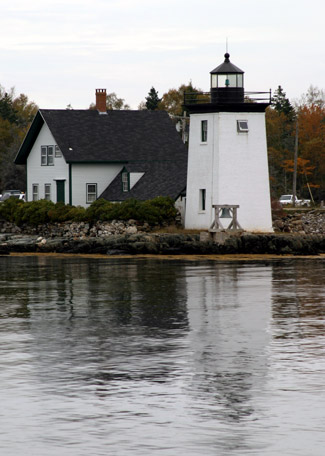 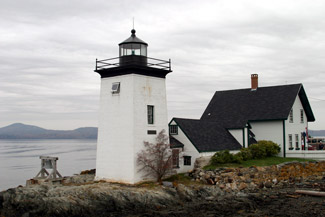 Few places on earth seem to have the power to attract numerous visitors yet remain unspoiled, but Islesboro, Maine, home to Grindle Point Lighthouse, has managed to do so. Since the Civil War, Maineunofficially dubbed Vacationland has attracted wealthy Bostonians and New Yorkers. Their summer cottages on Islesboro rivaled the mainlands finest mansions. Some of the famous (and infamous) who have been drawn to Islesboro (spelled Islesborough until 1890) include the financier J.P. Morgan, Eleanor Roosevelt, actors John Travolta and Kirstie Alley, Charles Dana Gibson (who made the Gibson Girl famous), and even Typhoid Mary (Mary Malone, who worked there as a cook for the Bond family before being seized by health officials in New York). Once known as Long Island, Islesboro is a fourteen-mile-long, curling leaf-shaped island that divides the surrounding waters into East and West Penobscot Bay. In fact, the Penobscot Indians called the island Pitaubegwimenahanuk, meaning the island that lies between two channels. The trip from one end of the island to the other took an entire day by horse and buggy, and cars were not allowed on the island until after 1933. Several of the smaller islands that surround Islesboro Warren, Lime, Ram, Seal, Ensign, and Minot are considered part of the Town of Islesboro. Its population of around 650 people swells several times over every summer.

In the 1840s, sixty-nine men, a good percentage of the islands male inhabitants, were registered as ship captains, and Penobscots largest commercial shipping fleet sailed out of Islesboro. From 1900 to 1910, the Pendleton Brothers, F.S. and Edwin, of Islesboro owned the largest fleet of sailing vessels in the United States.

On March 3, 1849, $3,500 was appropriated by an act of Congress to build Grindle Point Lighthouse to serve seafarers entering Gilkey Harbor on Islesboros west coast. The harbor, considered one of the best in Maine with easy access and deep water, was named for John Gilkey, a settler who arrived in 1772. For many years, his home doubled as a landmark for ship captains.

Grindle Point Lighthouse was built on land purchased for $105 from Francis Grindle (often spelled Grindel, as was the name of the lighthouse in Lighthouse Service records), who, for a number of years, lived in the home built by John Gilkey. The one-and-a-half-story brick lighthouse with a lantern centered on its pitched roof cost $3,100.16 to erect.

According to the book, History of Islesborough, Maine, written by Master Mariner John Pendleton Farrow, in 1893:

In 1856, a fifth-order Fresnel lens was placed in the lantern room, replacing the old reflector lighting apparatus. While Nelson Gilkey was keeper, an 1869 inspection found the light to be in good condition. Gilkey also worked during his lifetime as a postmaster and town clerk.

I had been watching the light during the night for two hoursit burned dimly all that time and at 3 a.m. had not the brilliancy of an ordinary family lamp, at four miles distant. The entire service of this lamp by Mr. Gilkey, the principal keeper, is faulty, he manifests no interest in his dutytalks much and from his own story to me I judge that he spends most of his time at the Grocery and post office. He was going to those places when I landed; but seeing the Inspectors boat returned. I found the Morning Routine neglected & that it was habitual for him to do this  the personal appearance of Mr. Gilkey and the look of the Government property under his charge convince me that Mr. Gilkey is an unfit man for the post of Light House Keeper, either principal or assistant. I therefore recommend his removal.

Inspector Mayos advice was taken, and Avery Gilkey was removed from his position later that year.

The Annual Report of the Lighthouse Board for 1875 records the following on Grindle Point: The light-house at this place was a one-and-a-half-story brick dwelling with a lantern on top, and was in such condition that it was deemed advisable to rebuild instead of attempting to repair it. A one-and-a-half-story frame building for a keepers dwelling, and a square brick tower for the light were therefore erected; the walls of the old house taken down to near the surface of the ground, and the roof lowered. The building thus changed will be used as a covered way between the dwelling and the tower, and for the storage of provisions, fuel, oil, and supplies of various kinds. The brick tower stands thirty-nine feet tall.

A problem with the borders of the lighthouses plot arose in 1889:

The site was surveyed and its boundaries were duly marked. The initial point of the boundary, described in the deed of July, 1849, a heap of stones at low water mark, was doubtless long ago destroyed, and a boundary line surveyed according to the deed from the most probable initial point would pass through the dwelling, and embrace between it and the shore a small tract utterly inadequate for the purposes of the Light-House Establishment. It is manifest that an error in description must have occurred in drawing the deed. Stone posts and copper bolts are now planted on the line occupied by the fence for many years, and the United States attorney for Maine is endeavoring to secure a correct deed from the heirs of the grantor of the original deed.

It took several years and cost $79.30 in legal fees, but problems with the deed were ultimately solved in 1892, at which time a wire fence was erected to mark the land.

James E. Hall, the former head keeper at Matinicus Rock, moved to Grindle Point in 1908. Hall remained there until a blasting accident resulted in his death at the light station in 1916.

Grindle Point Lighthouse was decommissioned in 1934, and its Fresnel lens removed. A skeleton tower topped with an automatic light was erected nearby as a replacement, and the station was sold to the town of Islesboro for $1,200. In 1938, the town established the Sailors Memorial Museum in the lighthouse to preserve the stories of the towns seafarers.

Some museum volunteers have reported that things move by themselves during the night, and some tell of having seen an old, bearded man who disappears into the lighthouse wall. The apparition and shifting of items are attributed to the early keeper Frances Grindle.

Islesboro residents successfully lobbied the Coast Guard to reactivate the light, and as a result the skeleton tower was torn down and a solar-powered optic that produces a flashing green light was installed atop the old lighthouse. On November 4, 1987, a relighting ceremony was held with Captain John Williams, Commanding Officer of Coast Guard Group Southwest Harbor, and Ken Black, director of Shore Village Lighthouse Museum, attending. Ken Black presented the Town of Islesboro and its museum with a 1,000-pound fog bell, similar to the one that had been used at the station.

Grindle Point Light is one of the few lighthouses in Maine where summer visitors may climb to the top of the tower. Although cars are now allowed on the island, they arent necessary to visit the lighthouse, as it is situated right by the landing for Islesboro Ferry.

For a larger map of Grindle Point Lighthouse, click the lighthouse in the above map.

Islesboro Island is accessible via a ferry from Lincolnville, which is roughly six miles north of Camden. The lighthouse is adjacent to the ferry landing on Islesboro. The keeper's quarters is home to the Sailors' Memorial Museum, which is open to the public Tuesday - Sunday, from July 1st through Labor Day.

The lighthouse is owned by the Town of Islesboro. Dwelling/tower open in summer.


The lighthouse is located right at the ferry landing, so you don't need to bring a car if your aim is to just visit the lighthouse. We opted to bring a vehicle and drove around the island before taking the ferry back to the mainland. Islesboro is a summer home to a handful of celebrities including John Travolta.