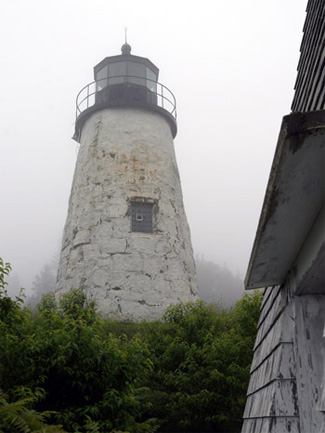 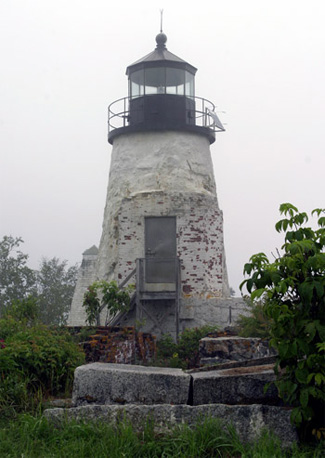 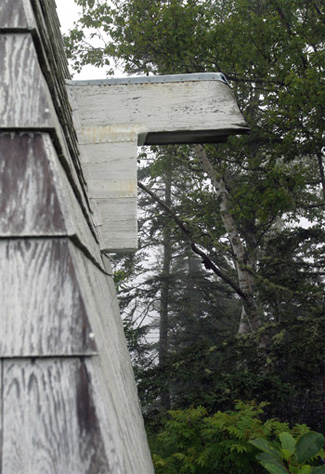 There are actually eight different Eagle Islands along the Maine coast. The best known is the one in Casco Bay, which was home to Admiral Robert E. Peary, who discovered the North Pole. That Eagle Island is now a state park, and Pearys home a museum. The Eagle Island that boasts a lighthouse is about one-and-a-quarter miles long by half a mile wide and is located where Isle au Haut Bay meets East Penobscot Bay. Congress allocated $5,000 for Eagle Island Lighthouse on March 3, 1837, one of seventeen lighthouses built in Maine during a fifteen-year period in the 1820s and 1830s. The high number was due to a combination of the obvious need for navigational aids along the rocky coast of Maine and to the political clout of the states Congressional delegation. Eagle Island Lighthouse was needed to guide ships going to and from Bangor, which at the time was well on its way to becoming one of the busiest lumber ports in the world.

Originally known as Eagle Island Point Lighthouse, the station was built on the northeast corner of the island on a six-acre point deeded to the government in 1837 by local landowner John C. Gray. The conical, twenty-five-foot tower was built of rubblestone and topped by a wrought iron, octagonal lantern room. Mr. Hildreth, the contractor for the station, also built a one-and-a-half-story rubblestone dwelling near the tower for the keeper.

John Spear, who received an annual salary of $350, activated the light for the first time on September 28, 1838. Nathan Philbrook replaced Spear as keeper in 1841 and submitted the following report on the station the following year:

The light-house is built of rubble masonry with a stone staircase. Owing to the use of bad mortar, and want of care in the erection, the tower leaks in every direction  the whole inside being covered with ice during winter, and the stairs dangerous to ascend. The deck has been thrown up by the frost; and the arch supporting it has settled several inches by the yielding of the abutting walls. The whole tower is a rough and defective piece of work. The lantern sweats badly, and one lamp, the only one that throws its light up the bay, where a strong light is most needed, is half concealed by the door of the lantern, which should have been placed on the land side, where no light is required. There appears to be barely lime enough in the mortar used, for both tower and dwelling-house, to give color to the sand.

The dwelling-house leaks all around the windows and about the dormer window on the roof. The walls are cracked about the lintels of the doors and windows. The chimneys all smoke. There have been no repairs upon the buildings since I came here. I am allowed a boat, and have also a boathouse and landing, with road leading to the same. The oil has been good, excepting last quarter. I received my supplies for the ensuing year yesterday. I have recently whitewashed and partially painted the light-house and dwelling-house, by which the principal defects are concealed. There are ten lamps in the lantern, with thirteen-inch reflectors, and they have consumed, during the past three-quarters of a year, one hundred and forty-seven gallons winter and one hundred and six gallons summer oil.

In 1857, a fourth-order Fresnel lens was installed, whose light was exhibited from a height of 106 feet above sea level and was visible for sixteen-and-a-half miles. When the station opened, whale oil or lard was used as fuel, but by 1877 all the lamps had been converted to kerosene, which was cheaper and produced a better light. Keeper Sweetland was not too fond of this change as he noted in the stations logbook on May 19, 1879: The light keeps me up nearly all night, it requires a great deal of care and watchfulness  to have a good light. I wish the L.H. Board would go back to Lard Oil.

A wooden dwelling, framed in hemlock and covered with clapboard pine, replaced the original stone keepers dwelling in 1857. This residence had three rooms downstairs, four bedrooms on the second floor, and a workshop connecting the building to the lighthouse tower.

Conditions were very primitive at Eagle Island Lighthouse. Keepers had to row about two miles to Deer Isle to get supplies, and then upon returning to Eagle Island, the supplies had to be hauled up a steep and narrow trail to the bluff where the station was located. If the wind was blowing in the wrong direction, the boat had to be landed on the opposite end of the island, requiring a much longer and more difficult trek with the supplies. In 1894, a stairway of seventy-six steps was built to make this trail much easier when it had to be used.

Keepers also had to buy their own uniforms and provide food for themselves and their families, not easy on a meager salary. Steam heat was added to the keepers dwelling in 1908, and an indoor toilet in 1949.

Despite the hardships, a number of keepers stayed for decades. Captain John Ball tended the light for fifteen years starting in 1883. His son Howard then replaced him as keeper, but John remained at the lighthouse until his death at the age of eighty-two.

An exasperated Howard Ball wrote the following to the district inspector in July 1908:

We are being very much annoyed by Mr. John M. Quinns sheep. Ive tried to put up with it and make no more complaints, but it has become almost unbearable. We have to drive ten to a dozen sheep out several times a day. It being a very dry season, feed on the govt. reservation is scarce and with all of these sheep in day and night, my cow doesnt get much chance to get anything and I have to buy hay and feed her from the barn. The sheep not only get into the pasture but are in the field and garden too. I have had to fence in my corn, peas, cucumbers and lettuce.

Though Keeper Ball was told that proper legal measures to prevent the grazing of sheep on the station would be taken, the matter was still continuing the next year as noted in these log entries:

June 1, 1909  I drove eight sheep off the lighthouse reservation today.

In 1913, after fifteen years as keeper, Howard Ball contracted pneumonia while helping guide a fishing vessel to safety. Howard passed away on January 31, 1913 and is buried in Hancock. Howards widow, Lucy, served as a temporary keeper until March 23, when Edward S. Farren arrived aboard the steamer Zinzania to take charge of the station.

Charles W. Allen took over the light in 1919 and served until 1931. While serving as keeper, Allen and his family listened to the first radio concert on Eagle Island in 1923 and starting in 1926, they went to church by radio. Finally, Frank E. Bracey was keeper from 1931 to 1945, when Coast Guard personnel took over keeper duties at Eagle Island. In 1941, Keeper Braceys son Frank E. Bracey, Jr. was married to Hester Gordon right in front of the lighthouse.

In 1932, during Keeper Braceys tenure, a 1,200-pound fog bell was suspended from a wooden, pyramidal tower and was struck by mechanical equipment every twenty seconds. When he could not see Deer Isle, located one-and-a-half miles to the east, Keeper Bracey would activate the fog bell. This bell replaced a smaller bell that had previously been rung by hand in response to vessels signals.

The station was automated in 1959, at which time the Fresnel lens was replaced by a 300mm lens, with an electric lamp powered by banks of batteries recharged by a diesel generator. The lights characteristic was changed to flashing white every four seconds. The fog bell was also turned off, replaced by a buoy just off the island. Today, the light is solar powered.

Many of the Coast Guard personnel who served at the station enjoyed life on Eagle Island, but none perhaps as much as Ralph K. Banks. Banks gave John C. Enk, author of A Family Island in Penobscot Bay, The Story of Eagle Island, this account of his island experience:

On Eagle Island, for the first time in my life, I found real friends and real neighbors. There are no words to express how I enjoyed my relations with the people of Eagle Island. I can only express my feelings toward this island as the best place that I have ever lived in my life. We didnt have TV or movies or cocktail bars, which a lot of people cant live without. What we did have was real neighbors and real friends  each day was a special event one way or another.

In 1963, the Coast Guard became alarmed at a rash of vandalism at other abandoned light stations in the area, and despite opposition from local residents, decided to burn down the keepers dwelling and all the other buildings besides the lighthouse and the bell tower. The edifices had been put up for bid, but as the new owner would have had to remove them from the property, there were no takers. The Coast Guard attempted to remove the fog bell from the island at the time they burned down the dwelling, but the bell slipped during handling and tumbled down the cliff into the water, where it was left. Years later, a local fisherman named Walter Shephard noticed the bell sitting in deep water, and with some help managed to get a chain around it and tow it to Great Spruce Head Island, where he served as a caretaker for the artist John F. Porter. Today, the bell remains on the grounds of the Porter estate.

Under the Maine Lights Program, the lighthouse was transferred to Eagle Light Caretakers. The station remains an active aid to navigation.

For a larger map of Eagle Island Lighthouse, click the lighthouse in the above map.

Eagle Island Mailboat, which operates out of Sunset on Deer Isle, passes by Eagle Island Lighthouse en route to delivering mail to several islands in the area. To make a reservation on the mailboat, call (207) 348-9316.


The day we took the mailboat, a group of musicians were going out to Eagle Island to put on a concert at the farmhouse. The mailboat dropped off the musicians on Eagle Island first, and then continued on to its regular mail stops, before returning to Eagle Island to pick up its mail and then heading back to Sunset. This change in the mailboat's route really proved to be fortunate. The lighthouse was not visible from the water that day due to dense fog, but we were able to off-load with the musicians, make a quick hike to the lighthouse, and then meet the mailboat when it came back to get the mail.