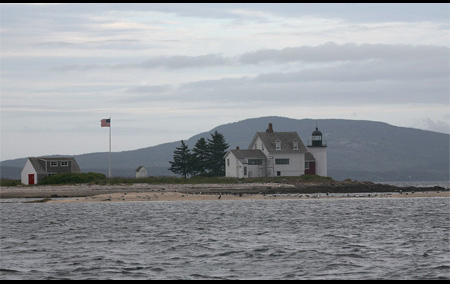 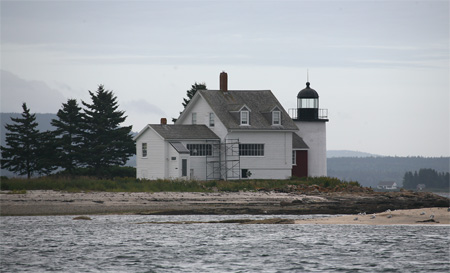 Blue Hill Bay Lighthouse is located on Green Island, situated on the west side of the entrance to the bay for which the light station is named. The station has also been known as Eggemoggin Lighthouse, as it is also situated at the eastern entrance to Eggemoggin Reach, the coastal waterway that connects Penobscot Bay with Blue Hill Bay. Traveling eastward across Blue Hill Bay from the lighthouse, one reaches Mount Desert Island, home to Acadia National Park, and Frenchman Bay beyond that. During the mid-nineteenth century, the town of Ellsworth on Blue Hill Bay was said to be the second-busiest lumber port in the world, and Blue Hill Bay Lighthouse was built to help guide the related ship traffic.

The cylindrical white tower with attached one-and-a-half story dwelling was built in 1856, after the government purchased the island the previous year from Abraham Flye for $150. The lighthouse looks today much like it did when it was built, except for a two-room addition that was constructed in 1890. Significant work on the dwelling and boathouse was done in 1881, as recorded by the Lighthouse Board that year:

A brick oil house was added to the station in 1905.

The original beacon at Blue Hill Bay was a fourth-order Fresnel lens showing a fixed white light with a visible range of nine miles during clear weather, but by 1863, a fifth-order Henry-Lepaute lens was being used in the lantern room. A 1,000-pound fog bell, alternately struck a single and then a double blow at twenty-second intervals, was established on the island on September 15, 1900. The bell was suspended from a white wooden pyramidal tower, and every five hours during foggy conditions, the keeper was required to wind up a weight suspended in the tower to keep the bell tolling.

The tides in the area have an average range of ten feet, and at high tide, the island shrinks down to around an acre in size. At low tide, Green Island is much larger, with exposed rock ledges that allow walking to nearby Flye Island. The rock ledges continue just under the water from Flye Island to the mainland, and in the other direction out into the bay beyond the lighthouse to a deeper channel near Pond Island, making them a dangerous hazard to ship traffic.

Lighthouse keepers often supplemented their meager income with fishing and farming, but because the light towers were often built on rocky islands with little vegetation, keepers sometimes had to use neighboring islands to graze their sheep and cows during the summer. In a typical lighthouse, the whole family pitched in to help, with the children rowing to nearby islands to pick berries and other available edible plants. Most lighthouse families had at least one cow for milk and several hens for eggs. Some also had sheep for wool and possibly a few turkeys for holiday dinners.

During the 1920s, a family living at a lighthouse like Blue Hill Bay was given a yearly ration of 500 gallons of kerosene and nine tons of coal. The kerosene was used to keep both the lighthouse and the keepers house lit, while the coal was used for heat. The coal was often not enough to last the winter and had to be supplemented by driftwood gathered nearby. Fresh water came from rainwater collected on the roof and stored in a pair of brick cisterns located in the dwellings cellar.

Roscoe Chandler, who served as keeper of Blue Hill Bay Lighthouse from 1924 to 1932, kept two cows on nearby Flye Island. Each spring, the cows were walked across the exposed rock during a low tide to graze all summer. The tides often didnt coincide with the twice-daily milking times, so the familys children often took the dory to the island, where they wandered the fifteen-acre island following the sounds of the cowbells. During thunderstorms, the spooked cows often went into the bay, and someone usually had to go out in a boat and herd them safely back to dry land.

Passenger steamers were an important and essential means of transportation between the Maine coast and the rest of the Eastern seaboard. The ships carried supplies and delivered the mail, taking circuitous routes among the small islands of the region. The sidewheeler J. T. Morse was a familiar sight at Blue Hill Bay Lighthouse, as it provided daily passenger and freight service between Rockland and Bar Harbor.

Most of the time, these ships did not slow down in foggy weather, as they had a schedule to keep, and because they took the same route every day so their captains were intimate with the geography and the amount of time each leg of the journey took. A stopwatch was used to keep track of the time between stops, and each ship frequently sounded its whistle as a warning. One foggy day, Keeper Chandler heard four blows on a whistle nearby, which indicated a vessel in trouble. After finding the ship in the fog, Chandler discovered its skipper had made a turn too soon and was not in imminent danger, but simply lost. Keeper Chandler shouted directions to the ship and turned around and went back to his station, using the sound of the fog bell to direct him.

On October 11, 1928, Keeper Chandler went to the assistance of a vessel that ran aground near the lighthouse. After helping free the boat, Chandler had to the matter to the sheriff, as this was during Prohibition and there was liquor aboard the vessel.

The lighthouse was deactivated on May 1, 1934 and replaced by an automated light atop a skeletal tower. Today, a solar-powered, flashing green light is displayed from a square, skeletal tower on the island.

Wilbur Trapp, an accountant from New Jersey who retired to nearby Brooklin, Maine, purchased the lighthouse in 1976 for use as a private residence. Wilbur and his wife Edith restored the lighthouse and installed a long floating walkway to a deepwater mooring, giving easy access to the island during all tides. In 1995, the Trapps sold the lighthouse to Jim and Alice Ann Madix. The Madixs placed the lighthouse on the market for $850,000 in 2015, and the price was down to $795,000 the following year.

For a larger map of Blue Hill Bay Lighthouse, click the lighthouse in the above map.

The lighthouse and island are privately owned. Grounds/dwelling/tower closed.