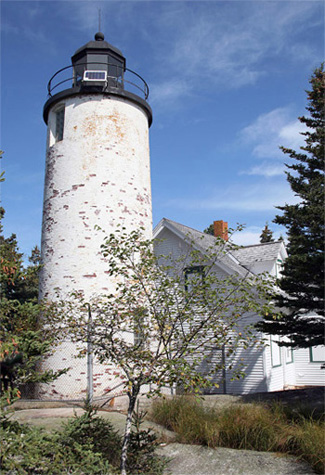 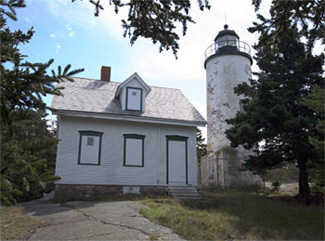 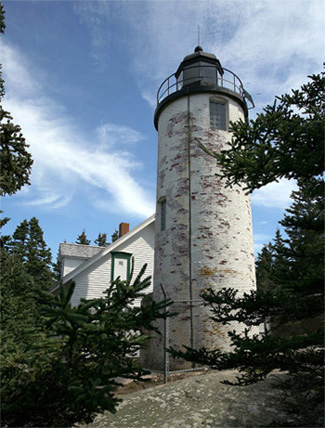 In 1812, William and Hannah Gilley moved with their three children to 123-acre Baker Island, situated four miles off Mount Desert Island. With a rocky coastline that often made landings impossible, Baker Island was unclaimed and unoccupied, so, according to Charles W. Elliot, author of John Gilley  One of the Forgotten Millions, the family simply took possession of it. Baker Island is the outermost of the five Cranberry Isles, located at the entrance to Southwest Harbor and named for the bright red berries found over much of the islands in the fall. The names of the other four isles are: Great Cranberry, Little Cranberry, Sutton, and Bear. With backbreaking labor, William Gilley cleared the land, ferried timber to a sawmill and back, and built a home for his family, which steadily grew to include twelve children, six boys and six girls. When the government needed a keeper in 1828 for its recently finished lighthouse on Baker Island, Gilley was the obvious choice.

Built of rubblestone, the twenty-six-foot-tall tower was topped by an octagonal lantern, with a wrought iron frame and copper dome, that housed tens lamps, backed by fifteen-inch reflectors and arranged in two rows, one above the other. The tower and keepers dwelling cost $3,800.

Gilley was provided a salary of $350 a year, free housing, and all the sperm whale oil his household could use but after a few years he received an official letter stating that he was using too much oil and had to economize. The governments lighthouse tenders supplied lighthouse families with just the barest essentials, such as flour and pickled food stuffs in barrels. Thus, land permitting, keepers constructed outbuildings and barns, often using their own funds, for raising animals. The Gilleys kept pigs, sheep, ducks, chickens, and cows in their barns and sheds, and fortunately, other food sources were abundant on Baker Island. Traps werent necessary to capture lobsters; they could simply be plucked from between rocks located just offshore. Fish, such as mackerel, were easy to catch, and the eggs of seabirds could be gathered. During the winter, the Gilleys killed a beef-critter or two as the family increased in number.

On the islands ten acres of arable land, they grew fruits, vegetables, and lots of potatoes, which they stored in a root cellar under the house. They planted flax for linen and spun wool from their sheep for clothing and blankets. The children went barefoot much of the year, and an older son learned the shoemakers trade to keep them in winter boots. On the mainland, the Gilleys would sell their butter, smoked herring, and other products so they could purchase needed supplies. Hannah Gilley loved to read and made sure her children could read and scribe.

The Gilley family was religious, independent, and had a hard, but generally happy life. But that is not to say that everything on Baker Island was idyllic. An 1842 inspection report by I.W.P. Lewis noted that the walls of the tower and dwelling were cracked and that the kitchen, built just five years earlier, had started to separate from the dwelling. The towers soapstone deck was loose and leaky, and the interior of the tower and its stairs were coated with ice during the winter. Crammed in a cold, four-room, rubblestone house, the Gilleys had no fresh water well, no cistern, and were not provided a government boat, despite being cut off from the mainland. Lewis report strongly recommended rebuilding the tower and dwelling, but this would not be undertaken for thirteen more years, after Keeper Gilley had left the island.

Despite their tribulations, the Gilleys treasured the beauty of the sea and shore at Baker Island until William Gilley was yanked from his position in 1848 for not backing the Whig Partyin those days lighthouse positions were plum presidential appointments. Even though his $350 salary was a fortune to coastal families in Maine, when given the opportunity to switch parties, Gilley replied, with some expletives, that he would not change his political connection for all the lighthouses in the United States.

Aged sixty-three-years, William Gilley left the island and lived mostly alone (Hannah was too infirm to join him) on the more remote Duck Island, which he had purchased earlier for $300, intending to raise cattle there. Back on Baker Island, his two older boys, asserting their ownership rights, badgered, bedeviled, and threatened two subsequent keepers until the government threatened to evict the young men from the island. One angry keeper wanted the Gilleys house destroyed and a revenue cutter sent in to have the business thoroughly done. The matter was eventually taken to court, and the U.S. government was awarded nineteen acres around the lighthouse and a right-of-way to the boat landing, while the Gilleys retained the rest of the island.

A report in 1853 noted that the tower on Baker was entirely worthless, while the keepers dwelling was so old and leaky that it was unhealthy. Two years later, the dwelling and tower were rebuilt for $4,963 on the islands highest point of land, far from the sea, and a modern fourth-order Fresnel lens was installed in the lantern room. The 1855 lighthouse originally consisted of a one-and-a-half-story keepers dwelling connected to a forty-five-foot-tall brick tower by a brick workroom. Around 1868, a wing was added to the south side of the dwelling to serve as a kitchen.

Each twilight the keeper would mount the forty-three spiraling, wrought-iron stairs steps to activate the light and return in the morning to extinguish it. The Fresnel lens is now in the Fishermans Museum at Pemaquid Point Lighthouse.

From 1888 to 1892, Captain Howard P. Robbins served as keeper. One of his grandchildren, Howard Robbins, would go on to marry the daughter of Captain Vurney King, who would serve as keeper at Baker Island Lighthouse from around 1915 to at least 1930. Some modern conveniences did eventually arrive on the island. King managed to transport a car to the island to make it easier to get around, and a telephone line, paid for by the national defense budget, connected the station with Northeast Harbor, Maine, in 1898. At the time the telephone line was put in place, an Army Signal Corps installation was established at Baker Island A brick oil house was built at the station in 1895, and a fuel house was added in 1905. The tower was reinforced with an external four-inch brick wall in 1903.

The lives of Keeper Joseph Muise and his wife were tied to the water surrounding Baker Island in the most joyous and grievous ways. As a powerful storm blew in November 1932, Muises wife went into labor. Unable to leave his post, Muise rang the Coast Guard. A lifeboat with a five-man crew picked up Mrs. Muise and set off for the mainland, but the baby refused to wait, and a healthy girl came into the world about two miles offshore. After the drowning of his oldest son at Baker Island in August 1932, Muise requested a transfer, and shortly after the birth of his daughter in the lifeboat, he was transferred to Moose Peak Lighthouse. After three years at Moose Peak, Muise spent a year at Mark Island Lighthouse and then fifteen years at Burnt Island Lighthouse, before retiring in 1951.

Baker Island Light was deactivated in November 1955, but was then reactivated in April 1957 as an unattended aid to navigation.

The governments original nineteen acres of land and the keepers dwelling were transferred to the National Park Service in 1958, leaving the Coast Guard with just the lighthouse tower and a twenty-square-foot of land on which it stood. In 1991 and again in 1997, the Coast Guard announced its intention to discontinue the light, but feedback from fishermen and other boaters convinced them that the light was still needed.

Pine trees had grown up around the light, blocking it in many directions, but Acadia National Park officials said budgetary restrictions prevent them from taking any action, as great swathes of trees would have to be topped or felled. The lighthouse tower was offered to non-profit and government groups in 2008 as part of the National Historic Lighthouse Preservation Act, and ended up being awarded to the Park Service in 2011.

During the summer of 2012 and 2013, the Park Service teamed up with a few other groups to create a defensible space of fire-resistant landscape around each of the structures on the island. Over 100 trees were removed to open up historic vistas that hadnt been seen for decades and to allow Baker Island Lighthouse to function more effectively as an aid to navigation. The chain-link fence that had surrounded the lighthouse tower for decades was removed in 2014.

In 2013, the Park Service published a Historic Structure Report on Baker Island Light Station to document its history and guide its preservation. The current plan is to lease the historic station to a responsible party, as is done at nearby Bear Island. The Coast Guard changed the beacon in the lantern room from a 300mm marine light to a Vega VLB 44 LED light in 2017.

Located on Baker Island one of the Cranberry Islands in Frenchman Bay. The island is part of Acadia National Park.
Latitude: 44.24128, Longitude: -68.19895

For a larger map of Baker Island Lighthouse, click the lighthouse in the above map.

The lighthouse is owned by the National Park Service. Grounds open, dwelling/tower closed.


During your trip to Baker Island, you will most definitely learn something about the history of the Gilley family, either from a park ranger or from informational signs posted on the island. Charles Eliot, President of Harvard and part-time resident of Northeast Harbor, wrote a book, first published in 1899, entitled John Gilley - One of the Forgotten Millions. Eliot opens his book with the following sentence: To be absolutely forgotten in a few years is the common fate of mankind. Continuing this theme, Eliot adds With the rarest exceptions, the death of each human individual is followed in a short time by complete oblivion, so far as living human memories are concerned.  Not one human being in ten million is really long remembered. By the look of the worn, sun-bleached tombstones on Baker Island, many bearing scarcely legible inscriptions referring to a member of the Gilley family, Eliot appears to be correct in his premise, but his book is helping to keep alive the memory of a few Gilley family members.

In 1812, William and Hannah Gilley moved their family of three children to Baker Island, where they were the sole inhabitants. The couple eventually had twelve children, John being the tenth child and youngest son. William Gilley became the first keeper of Baker Island Lighthouse in 1828, a post he held for over twenty years. Following his parents example, John settled on nearby Sutton Island, where he raised a family and lived a comfortable life through his resourcefulness as a farmer, fisherman, and landowner.

Eliot concludes his book on John Gilley by noting that Johns life was not one of distinction, fame or long remembrance; but it does contain the material and present the scene for a normal human development through mingled joy and sorrow, labor and rest, adversity and success, and through the tender loves of childhood, maturity, and age. We cannot but believe that it is just for countless quiet, simple lives like this that God made and upholds this earth.