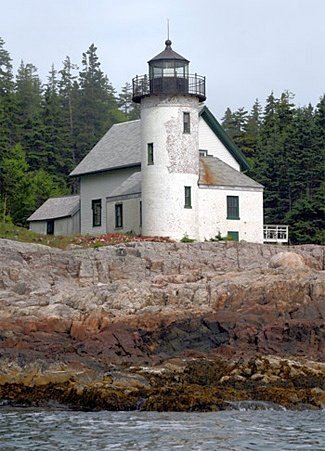 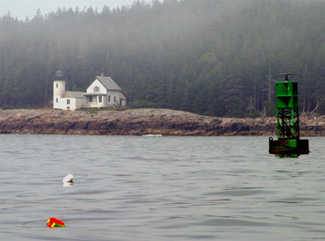 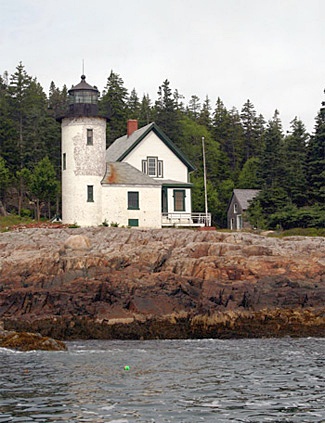 Narraguagus is reportedly an Indian name, meaning wide and shallow, and it has been applied to both a river and bay in downeast Maine. From the outlet of Eagle Lake, Narraguagus River runs southeast for just over fifty-five miles to Milbridge, where it empties into Narraguagus Bay. Starting in the mid-1800s, Milbridge became known as a shipbuilding center, and over 150 large ships were launched into the river from the towns shipyards. Milbridge was settled in 1765, incorporated in 1848, and on March 3, 1851 Congress appropriated $4,000 for the construction of a lighthouse on the eastern side of Pond Island to guide vessels into Narraguagus Bay. As there are more than ten Pond Islands in Maine, including another one that was home to a lighthouse, the beacon on Pond Island was known as Narraguagus Lighthouse.

Three acres for the lighthouse were purchased for $270 from Benjamin C. Stanwood, who ran a farm on Pond Island, and the superintendent of lights for the State of Maine supervised the construction of a cylindrical tower, surrounded by a rectangular, one-and-a-half-story dwelling. The lighthouse, which was put into service in April 1853, resembled the first lighthouses built in California at Alcatraz Island, Point Pinos, and Point Loma a few years later.

Joseph Brown served as the first keeper, but he was soon replaced by Wyman Collins, who earned an annual salary of $350. In 1856, a fifth-order Fresnel lens replaced the original set of seven lamps and twenty-one-inch reflectors used in the lantern room, but the signature of the light remained fixed white.

In 1875, the Lighthouse Board reported that the keepers dwelling had become uninhabitable, prompting the construction of a frame, one-and-a-half-story residence with five rooms for the keeper and his family. The old tower received a new deck and lantern, and a fog bell, struck by hand, was added to the station at this time.

A frame boathouse, twelve feet wide and twenty feet long, was built north of the lighthouse in 1880. The following year, a wooden cistern, six feet in diameter and with a depth of five feet, was provided to store the rainwater collected from the roofs of the stations buildings.

In 1887, part of the original brick dwelling was converted into a workroom, a cellar and cistern were built beneath it, and a covered way was constructed to link it with the dwelling built in 1875. The remainder of the old brick dwelling was then demolished. A new barn and fuel house were added to the station in 1892, along with a 1,500-gallon, brick cistern that was built in the dwellings cellar. The exterior of the tower was reinforced with additional brick masonry in 1894, and new iron stairs for the interior of the tower were provided.

Congress allocated $150 in 1900 so additional land could be purchased north of the station for a new boat landing, as the existing one was hedged about with ledges. The old boathouse and boatslip were relocated to the newly acquired land in 1902.

An inn, known as Pond Island House, was built on the island in 1878 and a golf course was added in the 1920s. As recorded in Anne C. Nashs book Pond Island Heritage, one of the island activities enjoyed by guests was visiting Narraguagus Lighthouse.

Elizabeth Hitchcock, an island resident, had a lot of interaction with Keeper William C. Gott and his family around the turn of the nineteenth century. I would go to see the keepers tall, slender, red-haired wife, Elizabeth recalled. She seemed always to be baking biscuits or yeast bread, and the kitchen smelled of bread, kerosene, and fresh paint.

On Sunday, people would gather at the lighthouse for evening hymn-singing sessions, accompanied by Elizabeths mother on a pump organ. Mrs. Gott wouldnt sing, Elizabeth remembered, but tears would roll down her cheeks. She was so happy to have friends come in the summer time. The winters were so lonely.

In 1900, William Dutcher, one of the early proponents of bird protection in American and who would become the first president of the National Audobon Society in 1905, wrote to a few lighthouse keepers in Maine, offering them rewards for protecting nesting gulls. At that time, gulls and other birds were being killed so their plumage could be used in hats, and their eggs were being collected for food. Dutcher penned the following to Keeper Gott at Narraguagus Lighthouse: If you will agree to care for these birds and protect them, and keep people from taking their eggs or shooting the birds until the first of October, I will pay you on receipt of your report on that date the sum of twenty-five dollars. This would have been a nice bonus, as Gott earned an annual salary of $540 as a lighthouse keeper.

On August 4, 1929, the Canadian schooner Valdare was dismasted in a violent storm and then wrecked on Petit Manan Bar. The keeper and first assistant at Petit Manan Lighthouse noticed the vessel that evening but were unable to render any assistance due to rough seas and floating wreckage. Fortunately, the four officers and crew of the Valdare were able to reach Narraguagus Lighthouse by rowboat where they were cared for by Keeper Charles E. Tracy for nearly two weeks. Having been provided food by Keeper Tracy, the men set out in their rowboat on August 16, and made their way some ninety-five miles to Nova Scotia. The British consul general at Boston wrote a letter expressing his gratitude for the services provided, and Keeper Tracy was officially commended for his assistance.

Narraguagus Lighthouse was discontinued in 1934, and the station was sold at auction to Wilbur Dameron. The property was passed down through the Dameron family and is believed to still be owned by them. A lighted buoy, located just off Pond Island, has taken over the function of the lighthouse.

For a larger map of Narraguagus (Pond Island) Lighthouse, click the lighthouse in the above map.

This light is best seen from the water. Robertson Sea Tours offers tours that pass by the island. In recent years, Bar Harbor Whale Watch has offered lighthouse excursions that pass Narraguagus Lighthouse.