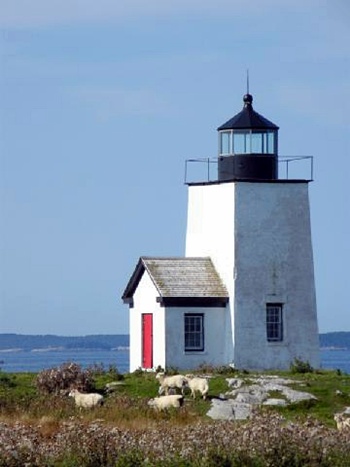 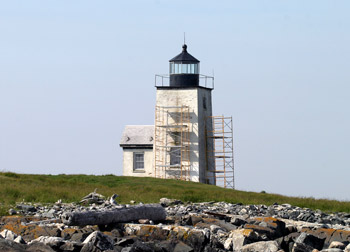 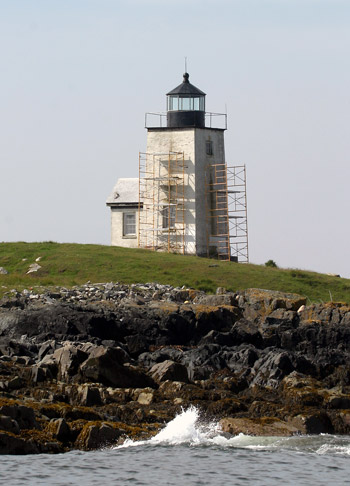 Many of the numerous islands that dot Maines coastline have traditionally been used for pasturing sheep  that is why there are twenty-three named Sheep Island and more than thirty named Ram Island. Seaweed deposited on the island by the tides served as a great food source for the sheep, and, coming from the ocean, supplied them with salt. Each spring, it was necessary to visit these islands to shear the sheep and oversee the lambing. While this ritual has all but vanished from the islands, there is still a pair of islands, Big and Little Nash Islands off Addison, where volunteers congregate each spring to keep the tradition alive. John Purington was appointed keeper of the lighthouse on Little Nash Island in 1916, after having served as an assistant at Egg Rock, Great Duck, and Mark Island. John and his wife Ellen had nine children that were raised on the islands, but it was their daughter Genevieve (Jenny), who was responsible for keeping the legacy of raising sheep on the Nash Islands alive. Jenny was four when the family arrived on Nash Island, and while the Puringtons also raised chickens, turkeys, and a cow, the sheep were Jennys favorite. We played with the sheep as far back as I can remember, recalled Jenny. She and her siblings would hitch them up and ride them like horses, and even used them to haul coal and lumber to the house.

Keeper Purington retired from Nash Island Lighthouse in 1935, a year after Jenny married Stanley Cirone and settled in South Addison. Over the next several years, Jenny bought up all the land that didnt belong to the government on Big and Little Nash Islands and kept her sheep there until her passing in 2004 at the age of ninety-one. Besides looking after the sheep, Jenny also captained her own lobster boat for more than seventy years. Even after two knee replacements and a hip replacement, Jenny kept piloting the boat through the summer of 2003.

Before passing away, Jenny entrusted her sheep to her next-door neighbors and close friends, Eleni and Alfie Wakeman. You can watch a 2011 video of Sheep Shearing Day on Big Nash Island. The island sheep are prized for their fog-washed and exceptionally clean wool. The most beautiful fleeces are reserved for handspinners, and the rest of the wool is processed into yarn by Starcroft Fiber Mill.

Located at the entrance to Pleasant Bay, Nash Island Lighthouse served to mark various harbors in the vicinity along with the western entrance to Moosabec Reach, a popular thoroughfare for the coasting trade. Congress appropriated $5,000 for a lighthouse at the entrance to the Pleasant River on March 3, 1837, leading to the purchase of four acres of land on Little Nash Island from the Nash family for $409. A twenty-four-foot rubblestone tower with a spiral stone staircase was built on the natural surface of a ledge and first displayed its light from its ten lamps, set in thirteen-inch reflectors, in 1838. A one-and-a-half-story dwelling, also of rubble masonry and with three rooms in its first floor and three chambers in its attic, was built nearby for the keeper.

When I.W.P. Lewis visited the island in 1842, he found that the east side of the tower was badly cracked and its soapstone roof was leaky, but it was in much better state than three other lighthouses in the area. Amber-colored glass, set in wooden frames, was placed in front of each reflector to produce a red light, but Lewis felt this only served to make a bad light worse. Lewis also believed the light was fifty feet too short, as Great Wass Island prevented the light from being seen from the northeast.

During an inspection in 1850, Keeper John Wass received high praise for his work:

This whole establishment is in fine order, and everything in and about the premises nice and clean; the whole has been whitewashed, pointed and painted. The keeper had been a sea captain, and knows how to keep his ship in order, and likewise how to sail her. I regard him as one of the best of light-keepers, in the care of the establishment of which he has charge.

The lighthouse received a new lantern in 1855, and into this a Fresnel lens was installed the following year to replace the antiquated lamps and reflectors. In 1873, the present square, pyramidal, brick tower was built on the island and equipped with a new cast-iron deck, parapet, and lantern room. The tower is fifteen feet square at its base and stands thirty-five feet high. A frame boathouse, measuring twelve by twenty feet, was added to the station in 1878.

On July 18, 1872, Inspector Thomas Selfridge wrote Joseph Henry, Chairman of the Lighthouse Board, regarding the keeper at Nash Island:

I would recommend very strongly that new Keepers be appointed for Nashs Island Light  The Keeper  has been there seven years & yet he has no Knowledge of the regulations, is shiftless and indifferent. He acknowledged that contrary to express regulations he was in the habit of lighting his light with matches. His light has been out more than once. In February last for an hour or more, and he asked the Keeper of Narraguagus light not to report it.

A survey taken in 1887 revealed that the stations fence enclosed roughly an acre of land that did not belong to the government, and that the boathouse had been built on the adjacent property. The boundary fence was subsequently relocated to the correct property line, and the boathouse was moved to land belonging to the station. Also in 1887, a wooden, pyramidal tower was built just west of the lighthouse to support a fog bell. A Stevens striking machine alternately struck the bell a single and double blow at twenty-second intervals.

Charles Holt, who was keeper when the fog bell tower was built, sent off a letter in 1892 requesting a raise. They put a bell on here that goes by machinery, he wrote. In thick or stormy weather it has to be going all the time. It has to be wound every 5 hours, night or day. Sometimes it has run 199 hours steady. There is about 3 acres of poor land here, just fit for a cow pasture. I am just as poor at the end of the year as I am at the beginning.

As mentioned earlier, John Purington arrived at Nash Island Lighthouse in 1916. That same year he went to the rescue of the schooner Maine, which had lost its foremast in a squall, and towed it three miles to safety with the stations boat. Two years later, Keeper Purington furnished lodging and gasoline to the occupant of a powerboat. Keeper Purington received some assistance from his nine children as evidenced in 1921, when his two sons, Robert and Raymond, were acknowledged in a Lighthouse Service report for having towed a disabled powerboat to safe anchorage.

Jenny Purington recalled that she and her siblings would help wind the fog bell machinery when necessary, and polish the stations brass every other day. Didnt I hate the brass cleaning, she said. The family also helped to whitewash the lighthouse, barn, and bell tower. A bosuns chair, consisting of a wooden plank and two pairs of ropes, was used to paint the lighthouse. After being hoisted to the top of the tower, Jenny was scared to death. My father asked me why I didnt get to work, and I said, I cant. My hands wont let go.

Jenny Purington Cirone shared some of her memories from Nash Island with Sherry Thomas, author of We didnt have much, but we sure had plenty.

But you see, ever since I was ten year old, I been messing around in a boat. I had ten lobster traps when I was ten years old. Course, we liked to get in them pods and go get the wood over on the other island, thought that was a big deal, you know.  It was the tricky pod, too; we had two pods, one tricky and one not.  Course, we had to go to school too. We started out havin a teacher out there on the island. And wed get in, well maybe, possibly four weeks out of the year. This teacherd go from island to island, two weeks here, two weeks there. By the time she got back to our island, wed already forgot what shed learned us. Then shed go home and one of my brothersd propose. Thats what kept happenin to em. My seven brothers took to marryin em fast as they come on the island.

Nash Island Lighthouse was automated in 1947, at which the lights characteristic was change from fixed red to a white flash every ten seconds and the fog bell was discontinued. Not long after automation, the Coast Guard visited Nash Island and burned down the dwelling and bell tower. Jenny Cirone was fit to be tied. Thats the only time I felt like hurting anybody in my life, she remembered. Afraid that the unattended fire would burn up her pastureland on the island, she got on the phone and kept calling until the Coast Guard sent people out to extinguish the blaze. Vernon L. Fash was one of the coastguardsmen who was sent to Nash Island aboard the USCGC Snohomish from Rockland to put out the fire. I thought we would never get it out because the peat just kept burning and burning, said Fash. I shall never forget it because it burned for days and needless to say we worked long, long hours and finally extinguished it.

Nash Island Light was discontinued in 1982 and replaced by an offshore, lighted buoy. Prompted by Jenny Cirones concern over the deteriorating condition of the abandoned lighthouse, Friends of Nash Island Light was formed and was granted ownership of the tower in 1997 as part of the Maine Lights Program. The dedicated group of volunteers, assisted by experienced stone and brick masons Richard and Gray Miles, scrapped off a crust of salt, lichen, and old paint, and set about repointing the tower and sealing it with three coats of a breathable whitewash. With concerned individuals looking after the lighthouse and sheep, Nash Island is a reminder of former times along the coast of Maine.

For a larger map of Nash Island Lighthouse, click the lighthouse in the above map.

The lighthouse is owned by Friends of Nash Island Light, while Nash Island is part of Petit Manan National Wildlife Refuge. The island is closed from April through August to protect nesting seabirds. Grounds open seasonally, tower closed.