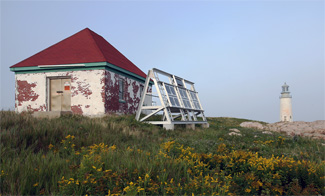 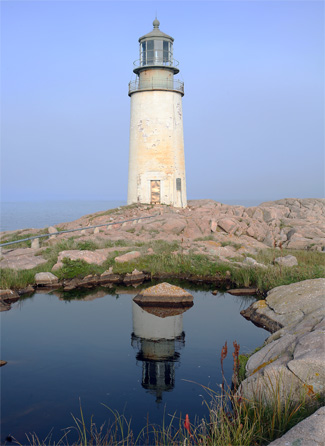 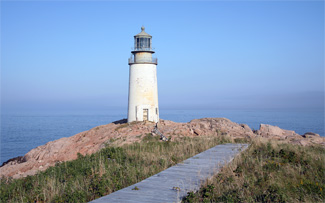 Moose Peak Lighthouse stands on the eastern tip of Mistake Island, a rocky mass located five miles southeast of Jonesport. The light marks the southwest side of the entrance to Main Channel Way, which leads to Moosabec Reach, the waterway separating Jonesport and Beals Island. Approximately fifty percent of Jonesport residents are descendants of Tall Barney, a seven-foot-tall, extraordinarily strong fisherman who has taken on almost mythical status. (This lineage might explain why Jonesport has had so many championship high school basketball teams through the years.) An equally fascinating figure in Jonesport history is Alexander Milliken, the first and longest-serving keeper of Moose Peak Lighthouse.

Following an 1824 appeal to Congress  Mr. OBrien presented a petition of sundry merchants, ship owners, and others, in the state of Maine, praying that a light-house may be erected on one of the head lands of the Moose-peak islands  $4,000 was approved in March 1825 to build the lighthouse where Milliken would serve.

The granite rubblestone lighthouse, which was built by Jeremy Berry and went into service on October 9, 1826, sat directly on a stone ledge, and a wooden trestle bridge allowed the keeper to cross the chasms of the rocks along the 297 feet that separated the tower and the keepers dwelling. The dwelling was also built of rubble masonry, quarried from a nearby ledge, and had two rooms and a lean-to kitchen on the first floor, and two rooms in its attic.

The towers octagonal, wrought-iron lantern room housed an iron frame with five Argand lamps and fifteen-inch reflectors on each of its two faces. The lighting apparatus revolved once every four minutes to produce a white flash every two minutes.

During southeast gales, the tower was pounded by the surf. In 1839, a storm-driven waves burst into the keepers dwelling, flooding it and driving the inhabitants upstairs for refuge. In 1841, the wooden bridge was washed away and the tower was nearly destroyed by the worst storms that people along the coast could remember.

Little is known about the first thirty-four years of Alexander Millikens life, but the next fifty were filled with enough adventure for any lifetime. Milliken was born in Scarborough, Maine in 1771, the son of fifth-generation Scottish immigrants, and his name is found on an 1805 list of innholders and retailers of spiritous liquors. Before becoming a lighthouse keeper, Milliken was a farmer, a postmaster, a court justice, and even a delegate and signer at Maines Constitutional Convention. His most exciting occupation was as a privateer captain, which essentially means he was a state-sanctioned pirate. In this role, he assisted in the capture of at least two British ships during the War of 1812

In an 1842 report, Keeper Milliken noted, The Government estate consists of three acres, and the whole land contains about 30 acres. The Government paid $150 for the three acres, and I bought the remaining 17 acres for $75. I have no garden or arable land on the estate. As there was no well or spring on Mistake Island, rainwater was collected from the roof of the keepers dwelling and stored in three, 150-gallon, iron-hooped barrels.

Records show that Keeper Milliken filed two petitions with his superiors  the first was for a salary increase in 1829, and the second, in 1831, was a petition praying that an out-house may be erected for his accommodation. His salary was increased, but whether he received the sorely needed outhouse is not recorded. Following his retirement from the lighthouse on October 17, 1849, at the age of seventy-eight, Milliken spent his final years as a farmer and mariner until his death in 1855.

Joshua Walker took charge of the light in 1849. In 1850, Keeper Walker, assisted by another person, had to rotate the lighting apparatus by hand for ten nights, as a fissure had imparted a lean to the tower that caused the weights to the clock-work mechanism to lay so hard against the box that contained them that there was insufficient power to revolve the light. Walker died in service in 1851, the year the original tower was refitted. After this improvement, which included the installation of a new lantern room and the construction of an entirely new brick tower, the focal plane of the light was raised almost twelve feet to sixty-five feet. In 1854, a new wooden keepers dwelling was erected, and a house for the assistant keeper was added in 1877.

By 1885, the towers foundation was cracked and had settled in spots, while the tower itself had bulged out in places and had cracks that ran its entire length. The 1885 Annual Report of the Lighthouse Board noted: The tower, which was built in 1826, has been repeatedly pointed and repaired, but from defects in its construction it cannot be made safe. A new tower should be built, as near as practicable to the present one. It can be built for $10,000.

Congress appropriated the requested amount on August 4, 1886 for rebuilding the tower at Moose Peak Light-Station, and the following work was carried out in 1888: installing an iron watchroom and a second-order lantern room atop the old tower, placing a new flight of iron stairs in the tower, and adding a brick workroom at the base of the tower. It is also likely that the brick tower itself was overhauled or rebuilt. The second-order, Henry-Lepaute Fresnel lens, which had been installed at Moose Peak in 1856 and produced a white flash every thirty seconds, had a focal plane of seventy-two feet in the new lantern room. A temporary fourth-order light was placed in operation until the second-order lens was relighted around September 5, 1888. In 1901, an eight-inch-thick covering of brick masonry was put in place to reinforce the tower.

Inspector Oliver Batcheller reported in 1887 that the wife and grown daughters of Keeper Thomas Dodge used the vilest possible language toward visitors, assistant keeper Charles R. Dobbins and his family, and even Keeper Dodge himself. To find peace, Keeper Dodge would resort to the lighthouse, but his wife eventually started harassing him there as well. When it became apparent that he could not control his wife or daughters, Keeper Dodge was removed, and Dobbins promoted to head keeper, a position he held until 1905.

On November 26, 1896, Keeper Dobbins and his son rescued the crew of the Nova Scotian schooner Ashton, at the risk of their own lives. The Canadian government rewarded Dobbins humane and gallant services with a gold watch, but the keeper could not accept the gift until Congress passed an act on March 28, 1900 authorizing him to do so.

During the Spanish-American War, a national defense fund paid for the installation of a telephone line in 1898 to link the station with Jonesport. The following year, the Lighthouse Board requested $6,000 for a new doubling dwelling at the station. This request was repeated the next three years before funds permitted the dwelling to be built in 1903. The spacious double-dwelling had six rooms in each of its two apartments and was covered by a gambrel roof with cross gables

In early 1931, several newspapers in the country carried the following press release issued by the Bureau of Lighthouses: Moose Peak Lighthouse, on the coast of Maine, has just completed another year as the foggiest spot in the United States according to the Lighthouse Service of the Department of Commerce. The keepers at Moose Peak reported 1,562 hours of fog during 1930, an average of roughly four hours each day, but this was down from the 1,607 hours that the station had averaged over the previous sixteen years. A hand bell was in use at the station as early as 1886 to answer a vessels signal, and in 1913 a first-class reed horn was established in a brick fog signal building to assist mariners blinded by the fog.

Moose Peak Lighthouse was automated in 1972, and the stations double dwelling was put up for sale. A private buyer was located, but complicated regulations made the sale impractical. The Coast Guard requested approval to destroy the house as part of a 1982 demolitions training exercise and received authorization from the Maine State Historic Preservation Office, which said the house had no historical significance. The demolition exercise went awry. Instead of imploding, the house exploded, blowing timber and debris over a large area. The stations helipad was damaged and window panes in the lighthouses lantern room were broken.

A Notice of Availability, dated July 9, 2010, announced that Moose Peak Lighthouse was excess to the needs of the United States Coast Guard and would be made available at no cost to eligible entities defined as Federal agencies, state and local agencies, non-profit corporations, educational agencies, or community development organizations for educational, park, recreational, cultural or historic preservation purposes. Qualifying organizations were given sixty days to submit a letter of interest.

The Town of Jonesport formed the non-profit group Keepers of Moose Peak Light, which started working to acquire the lighthouse in the fall of 2010. In January 2012, the organization learned that its application for the lighthouse had been denied by the National Park Service. Apparently they wanted us to have $50,000 to $100,000 in hand, said Larry Finnegan, chairman of Keepers of Moose Peak Light. We are not able to raise that kind of money without first knowing if we are going to take ownership. Finnegans group received an estimate of $207,000 for repairing cracks in the tower and cleaning and repainting it, inside and out.

The lighthouse, four surrounding acres, and the stations boathouse were offered at auction in June 2012, with a starting bid of $10,000. Five bidders participated in the auction, which closed on November 1, 2012, with a winning bid of $93,500. Donald J. Vaccaro of South Glastonbury, Connecticut was later identified as the successful bidder. The Coast Guard retained ownership of the brick fog signal building and solar array on the property. The Nature Conservancy owns the rest of Mistake Island, including the land under the boathouse, but will provide an easement so the boathouse can remain in its current location.

In March 2014, a movie about a female lighthouse keeper set to be filmed in Jonesport and on Moose Peak Island hit a snag when the Coast Guard refused to disable the islands foghorn, which operated 24/7. After news of the impasse was publicized, the Coast Guard agreed to install equipment so that the signal would only be active for forty-five-minute periods when mariners keyed their radios five times on a designated VHF channel. The movie is based on the lives of Abbie Burgess, keeper of Maines Matinicus Rock Lighthouse, and Ida Lewis, keeper of Rhode Islands Lime Rock Lighthouse.

In 2017, Donald Vaccaro donated Moose Peak Lighthouse to Arnold Memorial Medical Building Society, a non-profit organization that provides a health care facility that serves Jonesport, Beals, Jonesboro, Addison and Columbia Falls. The society promptly put the lighthouse on the market for $249,000, and in March 2019, Jeremey Richardson and Miriam Davidson purchased the property for $150,000. Jeremey set up a GoFundMe page to raise part of the estimated $200,000 needed to restore the lighthouse.

For a larger map of Moose Peak (Mistake Island) Lighthouse, click the lighthouse in the above map.

This light is best seen by boat. Landing on the island, which is controlled by the Nature Conservancy, is permitted as long as you stay on the boardwalk that leads to the lighthouse. Captain Laura Fish offers tours to Great Wass Island and Mistake Island. In recent years, Bar Harbor Whale Watch has offered lighthouse excursions that pass by Moose Peak Lighthouse.

The second-order Fresnel lens used in the lighthouse is on display at the U.S. Coast Guard Exhibit Center in Forrestville, Maryland.


I can attest that Mistake Island is a foggy place. My first trip to the island was on a foggy day, so I wanted to return to get some better pictures of the lighthouse. This return trip happened in early September 2006. It was a beautiful clear day when we left Jonesport, but as we approached Mistake Island, we could see an offshore fog bank that was headed our direction. We quickly landed, and I raced out to the lighthouse and managed to take several pictures before the island was enveloped in fog.