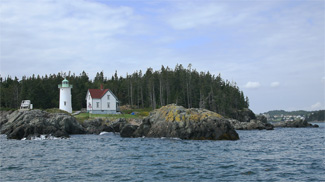 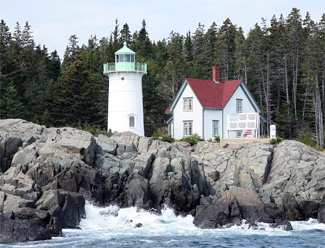 The history of Little River Lighthouse at Cutler, Maine began in 1842 when I.W. P. Lewis noted, There is no place on the coast of Maine where a light would be so truly serviceable as upon the island at the entrance of this harbor, a small beacon light being alone required. No usable harbor exists between Little River and West Quoddy, but there are two considerable indents, known as Moose Cove and Baylies Mistake, both of which are lined with reefs, and most unsafe to enter. Lewis believed a light at Little River would prevent any additional fatal disasters caused my mariners mistaking these false harbors for Little River, which Lewis described as being easy of access, sufficiently capacious for a large fleet, and secure from all winds.

Congress appropriated $5,000 in March 1847 to build a conical, twenty-three-and-half-foot-tall stone tower with an attached keepers house on the sixteen-acre island at the entrance to the harbor. The lights seven lamps and reflectors first shone in the spring of 1848 under the care of Zebediah Tucker. Each lamp burned about forty-two gallons of oil annually. Although the keeper performed his duties well, a mere two years later an inspector found the facility in a terrible state: Dwelling house is built of stone, and the tower is connected with the east end of it. The whole establishment is very leaky, the building being considerably cracked; in heavy rains the floors are overflowed, and the rain drives through the walls. Lighting apparatus is clean and good, and the keeper is a good one.

In 1855, when Keeper John McGuire was in charge, earning an annual salary of $250, a revolving fifth-order Fresnel lens replaced the array of lamps and reflectors. This change altered the lights characteristic from fixed white to fixed white varied every ninety seconds by a white flash. A fog-bell tower was constructed in 1871 two hundred feet southeast of the lighthouse to house a fog bell that was tolled once every thirty seconds by a Stevenss striking apparatus.

In 1876, the foundation for a forty-one-foot-tall iron tower was laid, as the stone tower was unworthy of repairs. This new iron tower is lined with brick and its exterior has been sported various colors over the years. The tower was painted red in 1878, but then by 1881, it was white. On May 20, 1900, the color of the tower was changed from brown, a color it had been since at least 1892, to its current white daymark.

The old 1847-keepers dwelling continued to be used as a residence, and the attached stone tower remained intact until 1879, when its top portion was removed and the remaining portion was roofed over. In 1888, the stone dwelling was demolished, and the present Victorian, wood-frame house was built on its foundation.

When Cutler became a popular summer resort, the International Steamship Company wished to add Little River Harbor as a stopping place. First, however, they insisted that a steam fog signal be added to the station, as despite the light and fog bell, ships continued to run aground in foggy periods. Keeper Lucius Davis, who was in charge of the station from 1870 to 1896, provided food and shelter for a schooners crew after it ran aground on November 21, 1875, and again for a badly frost-bitten crew that shipwrecked on January 28, 1881.

At midnight on July 21, 1889, the crew of the Spanish steamer Eduardo didnt hear either Little Rivers fog bell or a nearby whistling-buoy and struck Old Man Island, two miles south of the lighthouse, during a dense fog. The vessel, valued at $285,000 filled with water and was a total loss, but the crew of forty was saved. The captain of the Eduardo later wrote: If at the western point of Little River there had been a fog-whistle or trumpet, I assure you this accident would not have occurred, so that, in my opinion, it is absolutely necessary there should be at that point some fog-signal operated by steam during foggy weather.

The Lighthouse Board agreed with the captain, writing: this wreck would not have occurred had the fog-signal now recommended for Little River light-station then been in operation. It is estimated that the establishment of such a signal would cost $10,500, and the appropriation of that amount is therefore recommended. The Boards recommendation was repeated every year for over fifteen years, but a powerful fog signal was never built.

After the United States entered World War I in 1917, Little River Light Station came under the Navy Departments purview, along with twenty other lighthouses following an executive order signed by President Woodrow Wilson. According to the stations log, a telephone cable was laid to the island on July 10, 1917, a telephone was installed on August 16, 1917, and the station became an official Navy Signal Station in early October 1917. At the end of the war, the light station reverted to the Lighthouse Service.

Keeper Willie W. Corbett was in charge of Little River Lighthouse from 1923 to 1944. Willies son Myron wrote about the backbreaking process of getting coal to the coalhouse. Launches were loaded with 200-pound bags of coal, which were offloaded and then placed onto the backs and shoulders of men who would scramble, slip and slide up the beach with it. The men would empty the bags on the ground near the boathouse and repeat the process until eight or nine tons of coal had been offloaded.

Though a keeper was happy to receive the coal, it was up to him to get it across the island to the coalhouse. Little River Island is something like an inverted U in that there is a hump right in the middle of the island and no way to negotiate it except over the top and a planked wheeling trestle up the north side from the boathouse was maintained, Myron wrote. Every bone wearying step of the way across this humpbacked bit of detached terra firma found ones mind filled with the desire for an easier way out.

Both the light and fog bell used clockwork mechanisms that required hand winding every few hours, and there could be over 500 hours of fog a month. Golly that was a lot of work! remembers Willies son Neil.

Getting the keepers children to school was also a chore according to Gordon Corbett, Willies grandson. At Little River the only inhabitants on [the island were] the keeper and his family. Going to school meant a boat ride every morning and afternoon when papa would ferry them over to the mainland and back. A lunch would be packed for each child consisting of a piece of fish, a cold potato and maybe a molasses cookie or Johnny bread. Water was dipped out of the well bucket to wash it all down. Weather, of course, was a factor. There were days when it was too rough to row the children to school or days when it was too rough to pick them up. Arrangements for the latter situation were already taken care of when the children would stay with assigned families on shore.

Rough weather provided for some humor when Frederick Morong Sr. was keeper (1898  1913). Morongs daughter, Myra, was being courted by a young man from Cutler, and when the weather turned bad, the family insisted he stay the night for his own safety. Later, they were concerned to discover him missing, but he soon reappeared carrying a bundle  Hed rowed back home to pick up his pajamas.

After joining the Lighthouse Service in 1930, Gleason Colbeth was transferred to Little River in 1945. When the Lighthouse Service was dissolved in 1939, he decided to go into the Coast Guard rather than remain a civilian lighthouse keeper, a decision that he would regret. During an inspection visit in 1950, a Coast Guard officer encouraged Colbeth to take early retirement for health reasons. This wasnt a surprise, as Colbeth had heard that old lighthouse keepers were being squeezed out in favor of younger coastguardsmen. Colbeth enjoyed his job and couldnt afford to retire with two boys still at home. Despite the officers assurances that Colbeth was performing his job well, he was ordered to take a physical. After that, Colbeth was informed very bluntly and coldly, to go find another job. He was put on disability at $109.35 per month in July 1950, thus ending his career as a keeper.

Coast Guard Keeper Albert C. Vachon had a far more pleasant experience at Little River. Upon being brought to the island by Robert (Bob) Marston, Albert was greeted on the stations boardwalk by Bobs beagle. After I was shown my room there was scratching at the door, wrote Vachon. Bob opened the door and in walked a raccoon that started playing with the beagle and eventually went to the kitchen to eat some of the dog food. I knew then that I was in a pretty special place.

When the station was automated in 1975, the Fresnel lens was removed from the tower, and a modern light was mounted on a skeletal tower erected nearby. The Coast Guards plan to tear down the lighthouse and sell the island in 1981 was tabled following the intervention of a prominent local resident, but without a resident keeper the facilities steadily deteriorated.

In 2001, the American Lighthouse Foundation (ALF), under the direction of Tim Harrison, restored the lantern room so that the Coast Guard could install a new beacon in the tower that had been dark for twenty-six years. The relighting ceremony on October 2, 2001 was attended by over 1,000 people and filmed by the History Channel for a documentary, and by Jeff Dobbs productions for a PBS-TV documentary on the lighthouses of Maine. Because of the terrorist attacks a few weeks earlier on 9/11, the lighthouse, draped in a large flag, was relit as a Beacon of Freedom to the World.

In the early 2000s, a notable volunteer working with ALF was Hal Biering, known as Mr. Hal. After visiting the station, this jack of all trades traveled from Alabama to Maine to help, bringing along all his own tools. Often he worked alone, carrying all materials from the boat to the station. Fog and foul weather trapped him on the island at times. When a local TV personality asked Hal how much he charged, he said, I do this for free. I dont play golf, I dont play bridge, I just like to work. Someday, people will be able to say, A man from Alabama helped save this lighthouse.

In 2011, the Friends of Little River Lighthouse, which had been organized in 2007 by Tim Harrison as a chapter of the American Lighthouse Foundation, agreed to let volunteer Bill Kitchen, live at the lighthouse for one full year and write a daily educational blog about day-to-day life on the island with the hopes of raising money for the lighthouse. The program failed to produce the expected results and was discontinued. The Friends of Little River Lighthouse then returned to their program that had been originally started in 2009 with rotating volunteer seasonal caretakers to host overnight paying guests in the restored keepers house.

You can contact Friends of Little River Light to arrange your own stay at the light, and maybe youll decide that you want to stick around and volunteer, too!

For a larger map of Little River Lighthouse, click the lighthouse in the above map.

To reach Cutler, take Highway 191 from either West Lubec or East Machias. As the lighthouse is on the ocean side of the wooded Little River Island, a boat is needed to get a good view. Bold Coast Charters of Cutler offers puffin trips to Machias Seal Island and sightseeing trips along the Bold Coast that pass by this light. Since 2008, you can now spend the night at Little River Lighthouse. Occasional open houses that provide transportation to the island are offered during the summer.

The lighthouse is owned by the American Lighthouse Foundation. Grounds are open June - October (that's when the floating dock system is in). Dwelling open to overnight guests; tower open during open houses and special events.