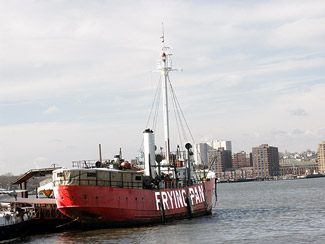 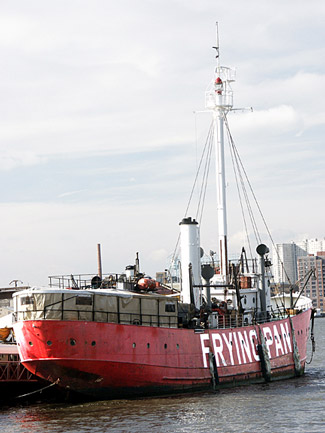 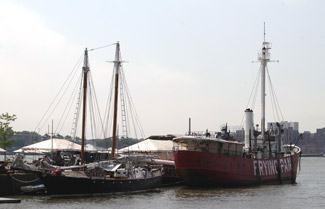 In 1784, the North Carolina General Assembly passed a law that levied a duty of six pence per ton on all vessels sailing up the Cape Fear River towards Wilmington. The collected money was intended for a lighthouse at the extreme point of Bald-head or some other convenient place near the bar of said river, in order that vessels may be enabled thereby to avoid the great shoal called the Frying-Pan. The treacherous Frying Pan Shoals extend some eighteen miles southeast of Bald Head Island, and the first two lighthouses built on the island in 1794 and 1817 proved inadequate at marking the extremities of the shoals. The Lighthouse Board thus ordered the placement of a lightship on the shoal in 1854. Eight lightships served at Frying Pan Shoals from 1854 to 1930, when LV 115 was first assigned to the station.

LV 115 was built in 1929  1930 at the Charleston Dry-dock & Machine Shop in Charleston, South Carolina and served at Frying Pan Shoals until 1964. The hull was launched on August 30, 1929, and the vessel was completed over the next several months. LV 115 was absent from the station during World War II, when it was commissioned as an examination vessel at Cristóbal, near the Panama Canal, from 1942 to 1944, and at Charleston, South Carolina, from 1944 to 1945.

David Melvin began his service aboard LV 115 in 1959. At that time, the vessel was known by the Coast Guard designation WAL 537. Melvin recalls that every two years they would return to port for repairs, and he would help place concrete in the bilges where the hull skin was too thin to be welded. A crew of fifteen was assigned to the lightship, but there were typically ten men aboard, as a third would be taking a fourteen-day leave after having spent twenty-eight days at sea. The men stood a six-hour watch, and then had twelve hours off that they could devote to sleeping, watching movies, catching up on correspondence, or fishing, which was excellent at the station.

Melvin worked in the engine room, where one diesel generator was typically active. If the anchor needed to be raised so the lightship could get back on station or if the evaporator or boiler was required to make fresh water, then one or more of the four main engines had to be started as well. Two compressors in the aft section of the engine room supplied air for the ships foghorns. The diaphones, which sounded a two-tone, four-second blast every thirty seconds, were deafening. When Melvin was asleep at night in his rack, he would sit straight up whenever the foghorns blew and then get a few seconds of rest before being raised from his sleep again. Needless to say, the crew didnt get a lot of sleep when the fog signal was active.

Melvin was aboard WAL 537 in 1960, when the crew learned Hurricane Donna was headed their way. Everything aboard was tied down, the crew donned their life jackets, and almost all of the chain attached to the vessels 10,000-lb mushroom anchor was let out in preparation for a rough ride. When the hurricane hit on September 12, the anemometer was pegged at the maximum reading of 100 mph, before suddenly dropping to 0 mph when the anemometer was blown from the ship. The crew didnt know if the ship would right itself after a particularly severe roll of 70°, and that was with 10,000 gallons of diesel fuel in the tanks serving as ballast.

After a couple of terrifying hours, the eye of the hurricane passed directly overhead, and the wind became eerily calm. The men took advantage of the break to go on deck and smoke a cigarette before bracing for the other side of the hurricane. Melvin estimates the height of the seas to have been roughly half of the ships length. At the top of each wave, the men could tell they were dragging anchor and soon started to worry that they would fall victim to the very shoals they were marking.

The crew amazingly came through the hurricane without any injuries, but the ship was littered with objects, and all the food in the walk-in refrigerator was on the floor in a big heap. When the captain was able to get a Loran fix, the lightship was found to be fourteen miles south of its assigned position. David Melvin said life aboard the lightship ranged from sheer loneliness and boredom, to all the excitement you could stand. He wouldnt want to relive those years, but wouldnt take anything in exchange for the experience.

In 1964, a four-legged tower, resembling an oil-drilling platform and outfitted with a light tower, was activated on Frying Pan Shoals. When the tower was completed, WAL 537 circled the platform, gave three blasts of its whistle, and sailed off to prepare for her new assignment at Cape May, N.J., as a relief lightship. Roughly two years later, after being decommissioned on November 4, 1965, the lightship was donated to a maritime museum in Southport, North Carolina. Budget issues doomed the museum, and while local officials argued about the ships fate, it sank at the dock, ruining the engine.

LV 115 was eventually refloated, sold, and relocated to Whitehaven, Maryland, on the shores of Wicomico River, where in 1983 a pipe burst, allowing sea water in and sending the lightship to the bottom again. After being mostly submerged for almost three years, the vessel was righted, but in the process her aft mast was torn out.

The salvaged lightship was purchased for $8,000 by John Krevey, who along with his friends, spent countless hours on weekends shoveling muck out of the ship, removing the rusted propulsion engine, and installing a small diesel motor. The lightship was dry-docked in Baltimore for a short period, and then the following spring was taken through the Delaware and Chesapeake Canal and up the Delaware River to Philadelphia, where it was easier to travel to the vessel on weekends from New York.

After a year in Philadelphia, the lightship sailed down the Delaware River, around Cape May and up the Atlantic coast at a top speed of four knots. Off Atlantic City, the crew encountered a storm that actually pushed the ship backwards for an entire day. The lightship eventually reached New York City, where it was docked at Pier 63 and along with the Lackawanna railroad barge functioned as restaurant/bar, dance club, and site of a summer classic film series. The owner intentionally left the barnacles on the interior walls and chose a strange mixture of science lab equipment, Persian rugs, and garage sale furniture to give the lightship an eclectic feel.

After ten years at Pier 63, the lightship was forced to move to Pier 66a in 2007 to make way for the construction of the Hudson River Park. There was some resistance to the lightship opening at its new location, but after the proper permits were obtained and certain concessions were made, the lightship re-opened during the summer of 2008.

For a larger map of Lightship Frying Pan LV 115/WAL 537 Lighthouse, click the lighthouse in the above map.

Access to Pier 66 is from the intersection of West 26th Street and the Westside Highway. The lightship is open to the public during the operating hours of Pier 66 Maritime Bar & Grill and can be rented for private events.

The lightship is privately owned. Grounds/lightship open during operating hours.