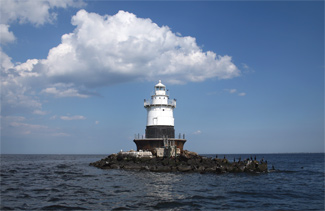 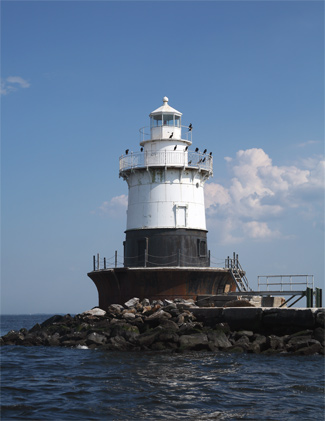 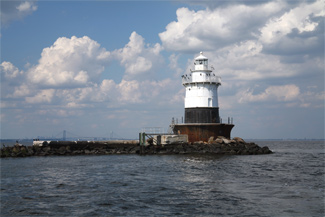 Old Orchard Shoal lies roughly two miles southeast of Crookes Point, the tip of the hook that forms Great Kills Harbor on the eastern shore of Staten Island. In the late 1800s when winter ice closed down Staten Island Sound, the waterway separating New Jersey from Staten Island, an estimated 15,000 tons of shipping per day were forced to use the narrow channel that ran along the eastern shore of Staten Island and pass dangerously close to Old Orchard Shoal. A bell buoy and a lighted buoy initially marked this shallow area, but mariners considered these navigational aids grossly inadequate. The Lighthouse Board asked Congress for $60,000 in 1889 to place a lighthouse on the southeast end of Old Orchard Shoal and to rebuild the tower at Waakcaack, near Keansburg, New Jersey, to serve as a rear range light to the new lighthouse. After Congress provided the requested amount on March 3, 1891, a site on the shoal was selected, soundings were made, and plans for the lighthouse were prepared and adopted.

The fifty-one-foot, cast-iron tower was built in the spark plug style, typical for offshore lights in the area. A canopy encircled the first floor of the tower, and a fourth-order Fresnel lens was mounted in the lantern room to produce a white beam of light to the southeast and a red light in the remaining directions. The light, which was first exhibited on April 25, 1893, was on for twelve seconds followed by three seconds of darkness. A fog signal, in the form of an air siren powered by an oil engine, was put in operation at the lighthouse on August 20, 1896 and sounded blasts of seven-and-a-half seconds followed by a silent interval of the same duration.

The first Waakcaack Lighthouse was a hexagonal wooden tower built in 1855 that stood near Creek Road in Keansburg, three-quarters of a mile to the rear of Point Comfort, its companion range light. In 1894, this tower was moved aside so a replacement iron skeleton tower could be built on the site. The new tower displayed two fixed lights, one at a height of 105 feet and the other at 95 feet, forming a range with the lights at Point Comfort and Old Orchard Shoal. When the town of Keansburg decided to incorporate in 1917, it used the outline of Waakcaack Range Light as its seal. Point Comfort Light was decommissioned in 1941, replaced by lighted buoys and a range light at Sandy Hook.

The lower portion of the towers caisson foundation was filled with concrete, while water cisterns and a basement were located in the top portion that flared out like a trumpet to a diameter of thirty-three feet. The three-story, brick-lined tower was centered atop the circular foundation and provided housing for the keepers and necessary supplies. The bottom two stories featured rectangular windows, while the third story was lit by five porthole windows. A metal staircase, located behind a metal partition wall, wound up the interior wall of the tower in a counterclockwise direction.

A circular watchroom surrounded by an open gallery sat atop the tower, and provided access to the octagonal lantern room and its gallery. Variety Iron Works Company of Cleveland, Ohio provided all of the metalwork for the lighthouse.

The first head keeper at Old Orchard Shoal was Alfred L. Carlow, who arrived after having served aboard both the Sandy Hook and Scotland lightships. Thomas Burke was the first to serve as the stations assistant keeper. Apparently, life on the stationary tower with little companionship did not agree with Carlow, as he was sent to the United States Marine Hospital in New York in 1902, suffering from nervous exhaustion. While Carlow was serving as keeper at Old Orchard Shoal, his daughter Annie married William Davis, keeper of Fort Tompkins Lighthouse. Following his release from the hospital, Carlow often visited his daughter at Fort Tompkins, and after one visit in October 1902, he climbed up into the lighthouses lantern room and hung himself in front of the light.

In 1916, Keeper William Epkens told a reporter about his procedure for catching up with the news of the world when papers were delivered to the station. Sometimes we get all the newspapers for a month past in one bundle. Then I begin living over that month the same way I would if I had been in the city where I could know what was going on. I begin to read the oldest newspaper in the bundle, and then go right down through the package, one day at a time, so that everything unfolds just as though I were living through it. I never skip a day no matter how much I may want to. Sometimes I take four or five days to read through the whole bundle.

Keepers at Old Orchard Shoal frequently had to assist inexperienced sport fishermen in small boats, who often got caught in the sudden squalls characteristic of Lower New York Bay. The actions of Keeper Andrew Zuius on June 26, 1927 were typical of previous services provided by him and other keepers. That day, four men were caught in the heavy seas of a severe storm, after their boat sprang a leak. By the time Zuius reached them, the fishermens boat was almost underwater. As was also typical of the keepers, Zuius offered food and shelter for the night to his unexpected guests.

During the winter of 1918, ice floes damaged the caisson foundation causing it to develop cracks. Roughly 7,000 tons of additional riprap were placed around the tower to strengthen the foundation, but the resulting wider extent of riprap prevented the stations boat from being launched using the davits on the main gallery. Consequently, a concrete boat landing, equipped with a crane, winch, and cradles for maneuvering the stations boats, was built over and beyond the riprap. Riprap was extended west from the lighthouse in 1929 to form a breakwater to shelter the boat landing.

Old Orchard Shoal Lighthouse was automated in 1955, but continued showing a flashing white light with a red sector, although it no longer had a fog signal. Its companion range light, the Waakcaack beacon, was deactivated sometime in the 1950s, and put up for bid by the government. The single received bid of $280 was rejected, and to the dismay of local residents, the tower was torn down and sold for scrap metal, although its beautiful keepers house still stands and is a privately owned residence.

In May 2007, Old Orchard Shoal Lighthouse was excessed by the Coast Guard and offered at no cost to eligible entities. After no qualified group was found, the General Services Administration (GSA) auctioned off the lighthouse during the summer of 2008. The winning bid of $235,000 was placed by asdfg on August 27.

In late June 2010, Old Orchard Shoal Lighthouse was back on the auction block. According to the auction rules of the GSA at that time, during a soft close date, if no increased bid is received by 3:00 p.m. Eastern Daylight Time, then bidding will close at 3:00 p.m. on that day. The bid of asdfg was made on August 27th at 8:59 a.m., but did not extend the auction by a day, as the GSA computer system would only do so for bids placed between 9 a.m. and 3 p.m. Shocked by the unexpected closure of the auction, Michael Gabriel, an attorney from Nevada who had bid $205,000 on August 26th, filed a lawsuit against the GSA. The lawsuit apparently resulted in the lighthouse being auctioned off again, but in the Invitation for Bids (IFB), it was stated that the property was still the subject of litigation. The updated IFB clearly stated that bids had to be placed between 9 a.m. and 3 p.m. in order to advance the soft close date to the next calendar day.

Michael Gabriel won auctions for Marylands Bloody Point Bar and Delawares Fourteen Foot Bank in 2006 and 2007, respectively, but defaulted on the closure of Borden Flats Lighthouse, which he had won in September 2008.

The second auction for Old Orchard Shoal Lighthouse opened on June 30, 2010 and closed on September 16 with a winning bid of $40,000 by a bidder named jvscalia. Four individuals placed bids on the lighthouse, but the winning bid was still almost $200,000 below the top bid in 2008.

On November 3, 2010, another auction was opened for Old Orchard Shoal Lighthouse. A note on the auction website indicated that the GSA was mandated to obtain estimated fair market value for its properties and opening bids for the lighthouse would begin this time at $45,000. A sentence in the updated Invitation for Bids read, The minimum bid amount does not represent the value of the property, but rather presents a reasonable starting point for the on-line auction, which is being re-opened. This was followed by the proviso that the government reserves the right to reject any and all bids.

This third auction for Old Orchard Shoal Lighthouse ended on December 1st with a bid of $95,000 placed by LYBSSZYA. This auction attracted four bidders, and the previous winner, jvscalia, fell short with a bid of $90,000.

On December 4, 2012, John Scalia, owner of Romer Shoal Lighthouse, sponsored an event to remember Old Orchard Shoal Lighthouse where Linda Dianto, executive director of the National Lighthouse Museum, announced plans to recover and reconstruct the lighthouse on the museum grounds. Calling it a Humpty-Dumpty project, Dianto already has enlisted the support of the Coast Guard and National Oceanic and Atmospheric Administration but still needs to obtain salvage rights from the current owner before the recovery can begin. Once rebuilt, the lighthouse would be a memorial to those who perished in Hurricane Sandy.

For a larger map of Old Orchard Shoal Lighthouse, click the lighthouse in the above map.

Old Orchard Shoal Lighthouse was destroyed by Hurricane Sandy in 2012.