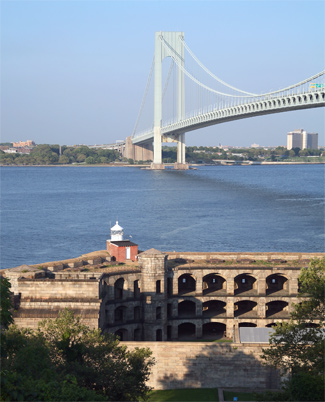 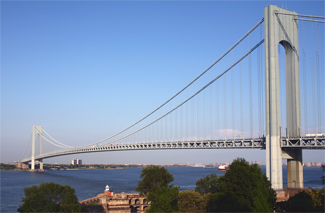 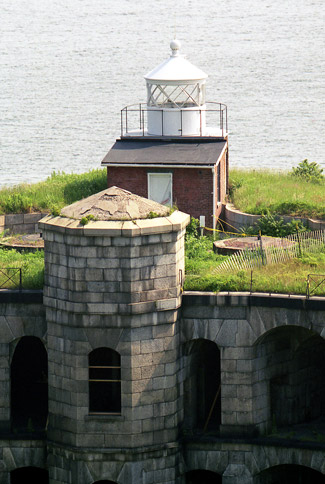 On a clear day, visitors to the restored Fort Wadsworth Lighthouse are greeted with a stunning panorama of New York Harbor, while all manner of ships, large and small, pass below. The lighthouse structure sits atop Fort Wadsworths Battery Weed, itself a historic and fascinating structure. At several places in the United States, the best location for defending a harbor entrance also happened to be the best location for a lighthouse to mark the harbor entrance, and so it is that forts and lighthouses were often neighbors. Construction of Fort Tompkins, named after Governor Daniel D. Tompkins of New York, started atop the hill overlooking the Narrows that separate Upper and Lower New York Bay in 1807, while work on Fort Wadsworth, the current fortification at the waters edge that was originally named Fort Richmond, commenced a couple years later. In 1902, the name Fort Wadsworth was applied to the entire military reservation on the headland, and the former Fort Wadsworth was renamed Battery Weed. Both James S. Wadsworth and Stephen H. Weed, whose names are applied to the fortifications, were brigadier generals during the Civil War.

Mariners entering New York Harbor during the early nineteenth century had been expectantly waiting for the first lighthouse at this site on Staten Island, then known as Fort Tompkins. A contemporary guide read: You will be up with the Can Buoy of the S.W. Spit, and may then alter your course to N. by E. ¼ E. for the bluff of Staten Island, where a light-house is to be built by December, 1827, showing a fixed light.

On March 18, 1826, Congress appropriated $30,000 for the construction of a lighthouse on the bluff near Fort Tompkins, a lighthouse at Princes Bay, and two towers on the Highlands of Navesink. The original Fort Tompkins Lighthouse, which opened in 1828, was a conical tower that rose forty feet to the base of its lantern room from which a fixed white light, produced by twelve lamps and reflectors, was displayed at a height of eighty-nine feet above the bay. In an 1843 report, E. Curtis, the New York Superintendent of Lights, described the condition of the lighting apparatus as being much worn, and in want of replacement. The light is not a good one, he wrote. I have had an opportunity to observe it for nearly two months this summer. The glass in the lantern is of the poorest quality, and would impair and destroy the most brilliant light. In 1849, the lantern room was refitted with nine brass lamps set in twenty-one-inch parabolic reflectors, and in 1855, a fourth-order Fresnel lens was installed.

The tower and keepers dwelling were positioned so close to Fort Tompkins that practice artillery firings often broke the lantern room glass. This problem, along with expansion of the fort, required a search for a new site for the station. In 1871, a temporary frame tower was erected for displaying the light, and a request was made for $8,000 to construct a dwelling surmounted by a tower that would have a smaller footprint. Congress provided the requested amount on June 10, 1872, and on December 20, 1873 a new gingerbread-style lighthouse went into operation, showing a fixed white light from a fourth-order lens. No longer needed, the old tower and dwelling were then torn down, and the property on which they stood was returned to the Army so a new battery could be constructed.

In 1892, it was decided that the second Fort Tompkins Lighthouse, then less than twenty years old, was situated too far inland to be effective, and a new site atop an angle of Fort Wadsworth was proposed for the installation of a light and fog signal. At the time, the nearest fog bell was at Fort Lafayette, on the opposite side of the Narrows, that served vessels traveling to and from Coney Island, but it was too far off to be useful to ships using the other and more frequented side of the channel.

Nothing was done for several years until the Lighthouse Board reported in 1895 that a battery of five, high-power rifles was about to be completed and armed directly behind Fort Tompkins Lighthouse. Congress appropriated $1,500 on June 11, 1896 for removing the light to Fort Wadsworth, but when this amount proved insufficient, the Lighthouse Board delayed relocation of the lighthouse and instead sought permission from the war department to place a fog bell atop the northeast angle of the seawall at Fort Wadsworth. With the consent of the war department, a 1,282-pound fog bell, struck by machinery every fifteen seconds, went into operation on May 16, 1898. This photograph shows the bell on the seawall with the lantern room of Fort Tompkins Lighthouse just visible to the left.

On March 3, 1901, Congress provided $12,900 for constructing a new lighthouse on the northeast end of Battery Weed at Fort Wadsworth and relocating Fort Tompkins Lighthouse to serve as the associated keepers dwelling. Work on the new tower began on October 16, 1902, and the new light and fog signal went into operation on May 11, 1903. This new Fort Wadsworth Light and Fog Signal Station took the place of Fort Tompkins Lighthouse and Fort Wadsworth Fog Signal Station, which were discontinued on May 11, 1903. The fog bell and machinery used on the seawall were moved to the new station atop Battery Weed.

The contractor hired to relocate and remodel Fort Tompkins Lighthouse started work on October 19, 1903 and completed the task the following summer. During this time of change, a tragic event took place at Fort Tompkins Lighthouse. On October 17, 1902, Annie Davis, wife of Keeper William B. Davis, found her father, Alfred Carlow, hanging in the upper floor of the lighthouse. After having had dinner with his daughter, fifty-eight-year-old Alfred went to the top of the lighthouse, where he tied one end of a rope about a rafter and the other around his neck and then kicked away the chair on which he was standing. Alfred Carlow served as the keeper of Old Orchard Shoal Lighthouse from 1892 to 1902, when he was sent to the U.S. Marine Hospital in New York, suffering from nervous exhaustion.

In May 1958, thirty-year-old Jacob A. Hughes was assigned to Fort Wadsworth Lighthouse, joining twenty-eight-year-old Thomas Somogyi who was living there with his wife, a three-year-old daughter, and two stepsons. Early one morning in November of that year, the two men quarreled in the hallway that separated their living quarters, and Hughes snatched a knife and stabbed the claw-hammer-wielding Somogyi in the neck, severing a major vein. Somogyi was rushed to the Public Service Hospital on Staten Island, where he died a few hours later. No immediate explanation for the altercation was given, but Army personnel reported that Hughes had objected to the attention Somogyi paid to Mrs. Hughes. Hughes was taken to the Army stockade at Fort Jay on Governors Island pending charges.

In 1965, the opening of Verrazano Narrows Bridge made Fort Wadsworth Lighthouse obsolete, and the light was discontinued. The lighthouse subsequently changed hands several times, first going to the Army, then the Navy, and finally to the National Park Service in 1995.

By that time, the abandoned tower was in poor shape. The lantern room was rusted inside and out, and there were rotted floorboards and dead seagulls inside. The roof was gone and vandals had long ago broken every window.

Despite these obstacles, a Staten Island man named Joe Esposito, who had served as a volunteer keeper at Staten Island Lighthouse for nine years, fell in love with the neglected lighthouse and began a campaign to save it. In 2002, Esposito presented a restoration plan to the Park Service, which approved it. For more than two years, a group of volunteers led by Esposito worked on the lighthouse, with the Park Service contributing $27,000 for needed materials.

The hardest part of the job was hauling materials up the sixty-six steps leading to the roof of Battery Weed, where the tower is located. The glass in the curved windows was replaced by Lexan, used in New York City buses and subways because it is unbreakable and fireproof.

On September 24, 2005 there was a re-lighting ceremony for the now solar-powered tower, but Joe Esposito, the man responsible for spearheading the restoration effort, had passed away four months earlier. His widow, Anna, was present and accepted a plaque from the Park Service, and had the honor of flipping the switch that returned the beacon to operation at Fort Wadsworth.

For a larger map of Fort Wadsworth Lighthouse, click the lighthouse in the above map.

Take Exit 15 from I-278, the closest exit on Staten Island to the Verrazano-Narrows Bridge. After exiting, travel to the north side of the interstate, and then go east one block to Bay Street. Turn right on Bay Street and continue to the fort. Fort Wadsworth is part of Gateway National Recreation Area. The Fort Wadsworth visitor center is open Friday through Sunday from Noon to 4:00 p.m., and can be reached at (718) 354-4500. There are occasional tours that allow visitors to get close to the lighthouse.