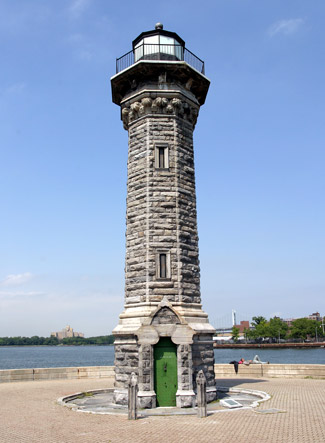 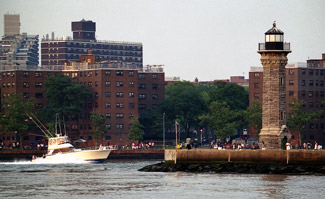 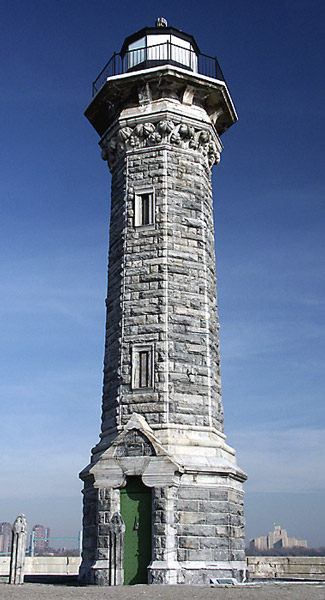 For nearly two centuries, Blackwell was the name that identified the island that lies in the East River just off Manhattan. The Blackwell family owned the island for some time, and their ancestral home still stands near the center of the island. The City of New York purchased the island in 1828 and transformed into an island of municipal institutions including prisons, poor houses, and hospitals. The island was renamed Welfare Island in 1921, reflecting the status of many of its inhabitants.

The prisons, which housed inmates like actress Mae West and William Marcy Boss Tweed, former Mayor of New York, closed when a new facility was opened on Rikers Island in 1935. In the late 1960s, plans were developed to turn a portion of the island into a residential community. The first housing complex opened in 1975, two years after the island had been renamed Roosevelt Island. Today, an aerial tramway (shown in the movie Spiderman) links the island to Manhattan, and a single bridge provides access to Queens.

The story of the islands lighthouse is told by a sign found near the tower:

This 50-foot-tall, gray gneiss, Gothic-style lighthouse was built in 1872. It is not an official Coast Guard lighthouse, but it was commissioned by the city. The lighthouses purpose was to effectually light the nearby New York City Insane Asylum for boats navigating the treacherous Hell Gate waters. It was designed by architect James Renwick, Jr., whose other works include Smallpox Hospital and St. Patricks Cathedral. Inmate labor was probably used in the city-run project, but to elaborate much on its construction is to explore legend.

The legendary mysteries are the names of Asylum inmate(s?) John McCarthy and Thomas Maxey and whether these two names refer to one person, two people or even existent people. Supposedly, before the lighthouse was built, McCarthy (or Maxey), fearing a British invasion, was constructing a four-foot-high clay fort on this site. Asylum officials let him finish the fort because, during his adrenaline-rushed work, he reclaimed significant areas of marsh. (They even gave him old Civil War cannons as encouragement.) When the city wanted to build the Lighthouse, officials bribed or persuaded McCarthy either to give up or to demolish the fort.

Whether McCarthy complied or not is the choice of the storyteller, but the fort did come down. Then, supposedly, another Asylum patient was summoned to build the Lighthouse. This inmate styled himself Thomas Maxey, Esq., architect, mason, carpenter, civil engineer, philosopher, and philanthropist. The lighthouse was built, though adherence to Renwicks blueprint is questionable. Despite Thomas Maxeys supposed labor, John McCarthys name was credited on a plaque that remained at the Lighthouses base until its mysterious disappearance in the 1960s:

This work
was done by
John McCarty
who built the light
house from the bottom to the
top all ye who do pass by may
pray for his soul when he dies.

The Lighthouse was decommissioned in the 1940s, designated a city landmark in 1975, and partially restored the following year. In 1998 an anonymous grant of $120,000 funded complete restoration (including internal lamps).

In its annual report in 1883, the Lighthouse Board noted the need for the regulation of privately maintained lights:

Some action should be taken relative to the establishment of lights and buoys by steamboat companies and other private parties, simply for their own convenience. The Board cannot establish a light without special authority of law in each case. It never exhibits a light without previously issuing a formal notice to mariners, and it never extinguishes one without giving similar notice sufficiently in advance to inform all concerned. Private lights are established and extinguished without such notice, much to the annoyance of mariners, who are confused and misled by irregular beacons. Besides this, the lights, not being properly kept, go out from time to time. One of the best of these private lights is that exhibited from Blackwells Island by the municipality of New York city. It has gone out a number of times recently, and so much to the inconvenience, if not danger, of mariners, that complaint has been made, and the Board has been subjected to unmerited criticism for failing to do what was alleged to be its duty, when in fact it has not the slightest control over that light. Under these circumstances, the Board suggests that the exhibition of lights and the placing of buoys by corporations or private parties be prohibited by law.

Blackwell Island Lighthouse, which was built by the department of public charities of the city of New York, was placed in operation in September 1872 and displayed a fixed red light at a focal plane of fifty-four feet above the river. Though the Lighthouse Board was not responsible for maintaining the light, the United States (presumably meaning the Lighthouse Board) did furnish a fourth-order Fresnel lens for use in the lantern room.

A decade after the establishment of Blackwell Island Lighthouse, the Lighthouse Board was authorized to establish an electric light on Hallets Point, 2,300 feet northeast of Blackwell Island Lighthouse, to guide mariners through Hell Gate, which runs between Wards Island and Queens. The name Hell Gate is an Anglicization of the Dutch word hellegat, meaning a bright strait or clear opening. Prior to the establishment of Hell Gate Light, mariners were forced to anchor until daylight rather than try to pass through the narrow and difficult channel.

Due to the cost of land near New York City, the Lighthouse Board was forced to lease rather than purchase land for the light. The contractors for the fabrication and erection of a 250-foot-tall iron tower suffered a setback when their derrick failed while putting in place the third section of the tower. The third section and other parts of the tower were damaged in the accident, delaying the establishment of the light until October 20, 1884. The Lighthouse Board reported the new light completely illuminated Hell Gate channel, furnishing a light as strong and as useful certainly as moonlight, and sufficient to enable even sailing vessels to go through the gate in safety.

The Brush-Swan Electric company installed Porter-Allen steam engines in a brick building to supply the electricity for nine, 6,000-candlepower lights atop the tower. Due to the limited size of the Government lot, the brick building had to be placed directly beneath the tower along with a second brick building to house the keepers. Daniel W. Fox was hired as the first keeper of the light at an annual salary of $1,000, and he was assisted by three men.

Not long after it was established, the Lighthouse Board received numerous complaints about the light at Hallets Point. Steamship companies claimed that the light was so brilliant that it dazzled the eyes of the pilots, and prevented them from seeing objects beyond the light or correctly judging distance within its radius; also that its shadows were so heavy that they often assumed the appearance of obstacles, and that to all intents and purposes the electric light was a nuisance and a hindrance rather than a help to navigation.

The powerful electric lights atop the tower were discontinued on December 1, 1886, and in their place a small lantern was shown from a stake at a height of twenty-five feet. The 250-foot-tower and the brick buildings, boilers, dynamo, and lamps were subsequently sold at auction. A wooden tower, which was fifteen feet square at its base and had a height of twenty feet, became the new home to Hallets Point Light on February 15, 1889. The Coast Guard still maintains a light on Hallets Point today to guide mariners through Hell Gate. This modern light is mounted on one of the light poles used to illuminate Whitey Ford Field.

For a larger map of Blackwell Island Lighthouse, click the lighthouse in the above map.

Roosevelt Island can be reached by taking the 59th Street Bridge from Manhattan over to Queens. Once in Queens, go north to 36th Avenue, and take it west to the island. There is a hospital at the northern end of the island. We found a parking space on the street near the hospital and walked to the lighthouse.

The lighthouse can also be viewed from First Street in Astoria, Queens with the Manhattan skyline in the background.