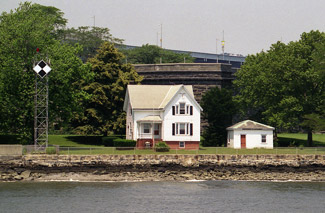 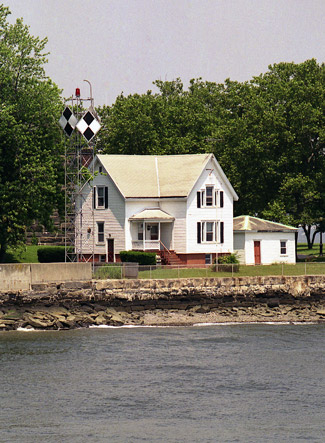 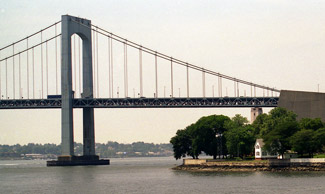 In the early 1830s, duck hunters always knew they could stop off at Throgs Neck Lighthouse for lighthearted camaraderie with sailors and soldiers and a good old swig of rum. To help supplement their lightkeeping pay, the first Throgs Neck Lightkeeper, Samuel Young, and his successor, James Bayliss, kept a bar on the premises. There were never any reports of trouble, probably because the clientele knew that any bad reports would have closed the place down. Once the Lighthouse Board assumed control of lighthouses, stricter rules were set in place, and the idea of a bar at a lighthouse would never have been tolerated. Throgs Neck, a small peninsula jutting into Long Island Sound at the confluence of Long Island Sound and the East River, is named after John Throckmorten, who arrived on the peninsula in 1643 with his band of settlers. The new arrivals were not given a very warm reception by the native Indians and soon decided to settle elsewhere, but a corruption of the Throckmorten name remained associated with the peninsula.

Fairly early on, the need for a lighthouse at this point to mark the entrance to the East River was recognized. The land for the lighthouse was obtained by the State of New York in 1823, possibly through a condemnation procedure, and construction of the lighthouse commenced in 1826 under the direction of Timothy, Ezra, and Elisha Daboll. The remainder of the peninsula was purchased during the construction period with the plan to build a defensive fort at the strategic location.

The first lighthouse was completed in 1826, but less than a decade later, it and the original keepers dwelling were torn down during the construction of Fort Schuyler in 1835. Some stones from the buildings were even used in constructing the fort. A temporary, forty-foot-tall, wooden, octagonal tower and a temporary two-story keepers dwelling were built near the fort in 1835, with the idea that they could easily be moved if necessary.

These temporary structures remained in use for roughly fifty years. In 1838, the wooden tower was cited as being in a leaky condition, and its lighting apparatus consisted of eleven lamps with spherical reflectors arranged around two horizontal tables so as to show light in every direction. The nine-room, frame keepers dwelling was in a good state of repair at this time.

Thirty years later, in 1868, it was reported that the wooden tower was old, leaky, shakey, and requires immediate and thorough repairs. In addition, the lantern was of an inferior pattern with small panes of glass and a leaky roof. As there was no place for storing supplies at the station, the Lighthouse Board proposed replacing the present lantern with a new one of the beacon pattern, with an iron deck-plate, lining the interior of the tower, and then configuring the lower portion of the tower for the storage of oil and supplies.

These proposed renovations were carried out in 1869, and a new and more efficient fog-bell, operated by a hot-air engine was set up. The first fog bell had been established at the station in 1854.

In 1874, it was noted that the keepers dwelling was in great need of repairs as its decayed sills had caused unequal settling resulting in the doors and windows being all out of position. Rather than repair the old structure, the Lighthouse Board recommended a new dwelling be built for $8,000, but as no money was provided, repairs to put the building in a condition fit for habitation were carried out in 1875. That same year, kerosene replaced lard oil as the illuminant in the lamp used inside the towers Fresnel lens, which had replaced the old array of reflectors and lamps in 1855.

The dwelling was described as being worn out and beyond repair in 1881, and work on a new one finally commenced in 1883 and was completed the following year.

The wooden tower was used six years longer than the keepers dwelling. In 1890, it was replaced by an iron skeleton tower that measured sixty-one-and-a-half feet from its base to the center of the lantern room, where a fifth-order Fresnel lens was installed.

In 1899, the War Department received permission to extend the embankment for a new battery six feet into the lighthouse reservation. Two years later, the Lighthouse Board recommended that the iron tower be removed as it was in the field of fire of the new battery. The keepers dwelling was left intact, but the iron tower was replaced in 1906 with a conical red brick tower, built atop the walls of the fort. A contract for the thirty-five-foot-tall tower was let on October 2, 1905, and the new lighthouse, equipped with a fourth-order lens, commenced operation on July 25, 1906.

The brick tower was discontinued in 1934, when it was replaced by a skeletal tower, which stood sixty feet tall and had a fixed red light with a range of eleven miles. That same year, the SUNY Maritime College established a campus at Fort Schuyler. This new tower stood close to the shore and had a white tank house at its base.

Charles A. Ferreira was born at Navesink Lighthouse, moved to Throgs Neck in 1884 at the age of ten when his father, Alexander Ferreira, was made keeper of the lighthouse, and then lived at Throgs Neck Lighthouse for the next sixty years. When Alexander Ferreira passed away in 1910, Charles took over responsibility for the light. Charles boasted that he never took a day off and that his light never went out. Besides faithfully attending the light, Charles also rescued a soldier from drowning after his canoe capsized off Fort Schuyler on December 8, 1929. An elaborate retirement ceremony was held at Throgs Neck for Charles in 1944. In addition to many former keepers and coastguardsmen, the ceremony was also attended by a U.S. Navy Vice Admiral, and 450 white-clad midshipmen and twenty-one officers who marched in review to honor Ferreira.

The 1934 tower was replaced in 1986 by a plain modern tower, which also displays a red light. The 1884 keepers dwelling was still being used as Coast Guard housing in the late 1980s, but it is currently used as a home for a member of the SUNY Maritime College faculty.

Located under the northern end of the I-295's Throgs Neck Bridge on the campus of SUNY Maritime College, near the confluence of the East River and Long Island Sound.
Latitude: 40.8046, Longitude: -73.7907

For a larger map of Throgs Neck Lighthouse, click the lighthouse in the above map.


The current tower at Throgs Neck isn't much to look at, but there is also a Maritime Industry Museum located in Fort Schuyler that supplements the visit. The museum doesn't have a formal section on lighthouses, but there are several photographs of lighthouses along with displays on the history of the Maritime College, the Port Authority of New York and New Jersey, and the fort itself. The museum does have a fog bell and a lens that were used at Throgs Neck.