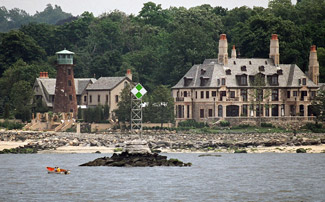 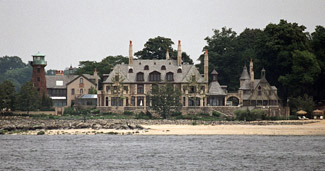 Sands Point is not named for its sandy beaches but rather for its early owners: brothers James, Samuel, and John Sands, who purchased 500 acres at the tip of Long Islands Cow Neck Peninsula in 1695. Sands Point Lighthouse is the third-oldest lighthouse still standing on Long Island, although it is no longer active. In 1806, after lobbying by Senator Samuel L. Mitchill of New York, Congress approved $6,000 for a lighthouse at Sands Point to warn ships of the dangerous Execution Rocks located 1,500 yards north of the point. New York State purchased the necessary land in 1808 from Benjamin Hewlett for $512.50 and donated it to the federal government. The boundary markers for the property were indicated as the shoreline, a large Walnut or Hickory tree, a marked Buttonwood, and a White Oak tree. Noah Mason, a Revolutionary War hero from Connecticut, won the construction contract, and after completing the station in 1809, he stayed on as the lights first keeper.

Mason was born a British subject in 1755 in Dighton, Massachusetts, but following the British invasion of Lexington and Concord in early 1775 that shocked many New England residents, the twenty-year-old Mason enlisted in the Continental Army. Mason helped build forts at Dorchester Heights in Massachusetts and on the Hudson River at Tarrytown, New York before being injured in the Battle of Saratoga in the fall of 1777. After being discharged in 1778, Mason moved to New London and became a mariner. He married Lucretia Kinnie in 1786 and continued to work at sea for another twenty years until he submitted the winning bid for constructing Sands Point Lighthouse.

The opening of Sands Point Lighthouse triggered a local celebration. According to the records for the Towns of North and South Hempstead, There was a grand civic festival at the place at which the members of the most respectable families in the neighborhood attended. Samuel L. Mitchill as the founder was honored with an invitation to meet his fellow citizens and was there on one of the happiest occasions that had occurred within the recollection of the numerous company that assembled. The lighthouse was apparently known locally as Mitchills lighthouse as shown by this early image.

The forty-foot octagonal tower was made of coursed brownstone, and the adjoining keepers house was of wood frame construction. As of 1838, the lighting apparatus was eleven lamps and nine-inch reflectors, arranged on two tables so that the fixed white light was directed at vessels transitioning between Long Island Sound and the East River. In 1856, a fifth-order Fresnel lens was installed, changing the lights signature to a white flash every thirty seconds. A new lantern room was placed atop the tower in 1863.

On September 10, 1814, Keeper Mason was involved in another act of British aggression, but this time only as a distant observer from atop Sands Point Lighthouse. As part of the War of 1812, the British frigate Acosta battled thirty America gunboats just offshore from the tower. Mason served as keeper until his passing in 1841 at the age of eighty-four. Lucretia Mason took over for her husband and served as keeper for a short period before Daniel Caulkins was placed in charge of the light.

The Masons reportedly added on to the dwelling, to the point that an 1838 report by Lt. Bache identified the house as having twenty-three rooms! After visiting the lighthouse in 1841, I.W.P. Lewis reported:

At Sands Point there was a sea wall, made from the loose stones, or boulders, lying upon the beach. This sea wall cost $1,500, and had partially tumbled down, although built the year before. It would have been much better to have left the boulders upon the beach than to have thus stripped it of the only protection against surf, ice, and the rapid current. The sea wall will soon be prostrated; for the stones composing it were merely piled loose against the bank, without foundation, or any thing to give strength and durability to the work.

Erosion would continue to plague the station for years to come, and the seawall had to be repaired numerous times.

In 1867, Congress allocated $9,400 to renovate the tower and replace the keepers house, which was deemed beyond repair by that time. A new brick dwelling was put up and connected to the tower, while the tower itself was extensively repaired and renovated. The towers wooden spiral stairs and window cases were replaced with cast-iron versions, and a barn, a shed, and an outhouse were built using the lumber from the old dwelling.

John Seaman was appointed keeper at Sands Point on March 12, 1866. After having served for fifteen years at the station, he almost lost his job when an inspector found that the dwelling was crowded with boarders, which the Keeper had received in violation of the Regulations, and after having been heretofore informed that he could not do so without the authority of the Board. The inspector called for the keepers immediate dismissal, but somehow Seaman kept his position and remained at the station until his death in 1895.

Sands Point Light was changed from a flashing light back to a fixed white on May 31, 1892, and then, no longer considered necessary, the light was deactivated on October 31, 1894. This action brought swift protests, and the light was reactivated on January 21, 1895, at the urgent and persistent request of mariners.

In 1913, Keeper Cornelius Douglass was recognized for rendering assistance to a woman who had been shot on the lighthouse beach. The twenty-two-year tenure of Keeper Douglass ended in 1917, when Thomas J. Murray was transferred from Esopus Meadows Lighthouse to take charge of Sands Point Lighthouse.

In 1917, a large plot of land next to the lighthouse was purchased by a wealthy New York socialite, who built a large and expensive mansion there. Mrs. O.H.P. Belmont, the owner and a noted suffrage leader, convinced the Bureau of Lighthouses to prohibit the lighthouse keeper from having any visitors on summer weekends, so as not to disturb the upper-crust gatherings at her estate. Many feel that her interference was one of the main factors in the decision to close the station.

On December 15, 1922, the light at Sands Point was moved to an automated steel skeleton tower located roughly 800 feet offshore on a reef protruding from Sands Point, and the lighthouse and associated property were subsequently put up for auction. The State of New York attempted to buy it for a park, but Mrs. Belmont objected to that plan and managed to purchase the property for $100,000 on January 31, 1923.

In 1927, Mrs. Belmont sold the mansion and the lighthouse to William Randolph Hearst for $400,000. For a while, the Hearsts lived in the keepers house and used the mansion for their guests. When Hearst started spending most of his time at his San Simeon estate in California, the Sands Point property was put up for sale, but in the depression era no buyer could be found. The Hearsts finally surrendered the property to a New York bank in 1940 to satisfy the mortgage.

The bank also had a difficult time finding a buyer for the large estate and eventually sold it to a Realtor, who divided it into one-acre lots and built the private residential development that stands there today. Over the years, the light station has been damaged by erosion and storms, and a number of different protection methods have been built, destroyed, and rebuilt. Despite all that, the keepers house and original lighthouse remain in good condition. The only view of the lighthouse for visitors is from the water.

For a larger map of Sands Point Lighthouse, click the lighthouse in the above map.