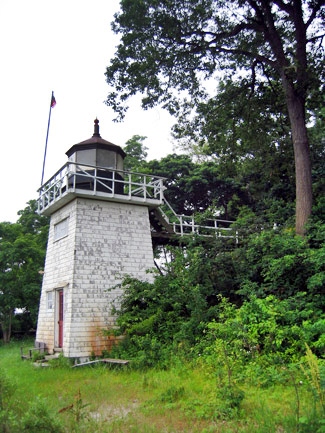 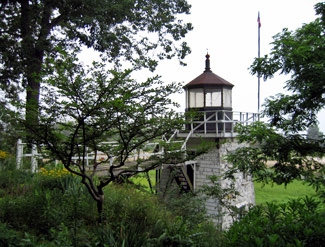 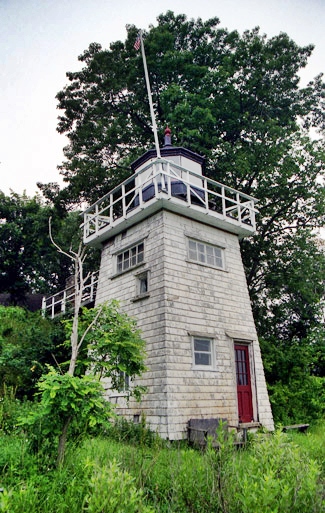 Major Thomas Jones, an early settler in the area described as a privateer, was born in Ireland in 1665 and relocated to Oyster Bay, New York in 1695. His great-grandsons founded the whaling fleet that remains Cold Spring Harbors most famous legacy. The Jones brothers started out in the 1820s with a textile mill, grist mills, and a coopers shop, but when those businesses started suffering from increasing competition, the brothers turned to whaling.

In 1836, they purchased their first whaling ship, the 100-foot Monmouth for approximately $20,000. The vessel set out on its maiden voyage from Cold Spring Harbor in July of that year, and returned on May 4, 1837 with an impressive 1,700 barrels of whale oil. Buoyed by this early success, the Jones brothers bought a second ship. In 1839, they incorporated their venture as the Cold Springs Whaling Company, and by 1852, the company had nine ships. After the deaths of two of the brothers in the late 1850s, the family business wound down quickly, signaling the end of the whaling business in Cold Spring Harbor, although shipbuilding and other local industries continued. Today, Cold Spring Harbor Whaling Museum interprets the whaling and maritime history of Cold Spring Harbor.

Throughout this time, despite all the maritime commerce in the area, there had been no beacon to guide ships around the dangerous shoal at the harbor entrance. Finally, in 1875 Congress appropriated $20,000 and approved a plan to build two range-lights on the mainland. Acquiring the necessary land proved difficult due to owners that were reluctant to sell. Also, although the proposed locations for the two new lights were fairly close together, one was in Queens County and one in Suffolk County, which duplicated much of the work.

At this point, some called for the light to be placed on the shoal instead, but it was thought that the available funds were not enough to build an offshore light. Finally, in 1889 a workable plan was approved for an offshore station, and it was quickly built and opened the following year. The stations square, pyramidal tower, built of wood, rested on a concrete-filled, iron caisson. The beacon, with a focal plane of forty-and-a-half feet above mean high water, was a fourth-order Fresnel lens powered by kerosene and was first lit on January 31, 1890. The lighthouse originally exhibited a fixed red light, but on May 31, 1892, its signature was changed to fixed white with a red sector covering Buoy No. 17 and Center Island around to Plum Point. A fog bell at the station was struck automatically every thirty seconds when visibility was limited.

Cold Spring Harbor Lighthouse was equipped with a boat, suspended from davits, which the keepers used to reach the mainland. William S. Keene, the lights first keeper, was selected from among a pool of seventy-five applicants seeking the job but served for just a month before resigning. Samuel L. Turner, his replacement, spent a decade at the light  one of the longest terms of service for this cramped station.

On August 3, 1908, Keeper Chester Rowland returned to the lighthouse after watching the motorboat races in Huntington Harbor, and while ascending the stations steep ladder, he slipped and fell into the water. Two men on shore saw the incident and immediately went to offer assistance, but they were unable to locate the keeper, who was unable to swim. The keepers body was found three days later at Whitehead Point, not far from the lighthouse.

Arthur Jensen, who had been serving as an assistant at Execution Rocks Lighthouse, took charge of Cold Spring Harbor Lighthouse next but remained for only eight months before accepting a transfer to Eatons Neck. During his brief tenure, Keeper Jensen was visited several times by President Theodore Roosevelt, who had a summer residence nearby at Sagamore Hill and would often row his children out into the harbor.

Keeper Louis P. Brown left a description of a gale that damaged Cold Spring Harbor Lighthouse on February 25, 1918: Last night while a south to southwest gale was blowing, a cake of ice about 1 mile square, from 4 to 8 inches thick, came out with tide and wind from Cold Spring and struck this station with such force it jarred the lantern doors open, also throwing a number of articles from shelves, oil cases and cans, dishes, pots, and pans. Brown commented that the ice made the lighthouse sway, crack, and tremble tremendously. Afraid the light might be upset and start a fire, Keeper Brown put it out for just over an hour, from 1:45 a.m. to 2:55 a.m., and employed a small hand-lantern in its place. An inspection conducted the following spring found the ice had caused $12,800 worth of damage to the station.

Besides caring for the lighthouse, Louis Brown also kept a watchful eye on the surrounding waters. During one year, he towed ashore four people in a disabled launch, rescued two young men from a filled canoe during a heavy storm and gave them supper, bed, and breakfast, and towed five men in a disabled dory to Oyster Bay.

The light was automated in 1948, and responsibility for its maintenance was given to Coast Guard personnel at Eatons Neck.

In 1965, the wooden lighthouse was removed from the caisson and replaced by a steel skeleton tower. The old wooden tower was scheduled to be torn down, but a resident living on Centre Island purchased it for one dollar. Known as Lady Glen, she had fond memories of the lighthouse, including one keeper who kept a piano at the station. When he played, the music could be heard drifting across the water.

The wooden tower was placed on a barge to be taken to shore, but the barge then got stuck on a sandbar. Many methods were tried to free the barge, including attaching a heavy steel cable, which snapped. Anyone in the way of the cable ends as they whipped through the air would likely have been decapitated. The barge, with the lighthouse on top, ended up sitting on the bar for almost a year, waiting for a tide high enough to allow it to float off. When it was finally freed, the lighthouse was placed in Lady Glens yard, overlooking waters where it formerly stood. Cold Spring Harbor Lighthouse is the only lighthouse on Long Island that has been moved from its original site.

The lighthouse was originally located on a shoal, roughly a mile off Centre Island in Cold Spring Harbor. The caisson and a metal superstructure remain at the original site. The wooden lighthouse was relocated to a private residence on Centre Island.
Latitude: 40.91419, Longitude: -73.49316

For a larger map of Cold Spring Harbor Lighthouse, click the lighthouse in the above map.

The original caisson can be seen from Lloyd Beach. To reach Lloyd Beach, at the intersection 0.2 miles west of Highways 25A and 110, turn north on W. Neck Road. Lloyd Beach will be on your right after 4.3 miles. You can also see the original wooden lighthouse on the shore of Centre Island across the harbor. Centre Island is a gated community, and is thus not accessible to the public.