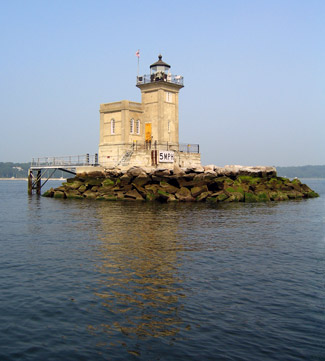 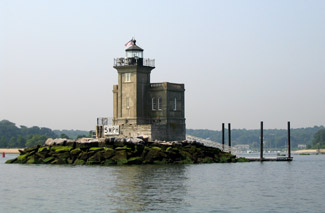 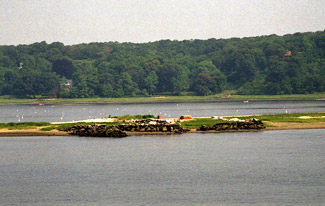 Huntington Bay was a favorite anchorage for ships traveling Long Island Sound in the early 1800s, however, onshore winds often drove ships to seek further protection in adjacent Lloyd Harbor, which branches off Huntington Bay. In 1838, Lt. George M. Bache noted that upwards of seventy vessels had been counted lying at anchor in Lloyd Harbor and recommended that a light be built to mark its entrance. After inspecting the site in 1853, Captain Hiram Paulding of the U.S. Navy agreed, writing to the U.S. Secretary of the Treasury, Lloyds Harbor, on the Long Island sound, is the only refuge in stormy weather, for many miles, for the numerous coasting and other vessels that navigate the sound in all seasons. The light on Eatons neck guides them into the bay of Huntington; but the approach to Lloyds harbor, where alone they can find a safe anchorage, is dangerous. Ships entering Lloyd Harbor had to avoid a sand spit protruding into the channel on one side of the entrance and rocks on the other side. Safe passage was difficult at the best of times, and almost impossible at night or other times of low visibility. Captain Pauldings letter to the Secretary, penned on August 9, 1853, continues:

Having been repeatedly requested by the watermen who navigate the sound to give my aid in bringing this subject to the notice of the government, I have considered that I could in no way more properly do so than by addressing myself to your excellency. That a more perfect knowledge may be communicated to the department, and upon which an appropriation may be asked of Congress, I would most respectfully propose that a commission of two or three officers be appointed to examine the location, and report to the department over which you preside.

Pauldings appeal proved successful as Congress approved $4,000 on August 3, 1854 to build a beacon light to mark the entrance to Lloyd Harbor. Two-and-a-half acres on the sandy spit, along with a right of way, were purchased from the Denton family on July 26, 1855 for $250, but construction on the lighthouse would not begin for almost two more years.

Lloyd Harbor Lighthouse was finished in 1857 and consisted of a two-story, wood-frame dwelling built on a brick foundation and attached at one corner to a square brick tower. A kitchen, dining room, and sitting room were found on the dwellings first floor, and three bedrooms on the second. The original beacon was a fifth-order, Henry-Lepaute Fresnel lens showing a fixed white light at a focal plane of forty-eight feet.

The first keeper listed for Lloyd Harbor Lighthouse was John S. Wood, but he was replaced on August 11, 1857 by Abiathar Johnson, and the light wasnt lit for the first time until November 15, 1857. Robert McGlone, whose twenty-four years at Lloyd Harbor was the longest tenure of any keeper at the station, was made acting keeper in September 1885 and then permanent keeper on July 9, 1886. Mrs. McGlone died in March 1900 from pneumonia, prompting Keeper McGlone to hire Augusta Gussie Harrigan, a local woman, to help care for his five children and home.

In its 1871 Annual Report, the Lighthouse Board noted, The damage caused to the Lighthouse at this station by the gale of November 22, 1870, has been repaired and a granite wall built to protect the station, at a cost of $3,000. This sea wall was damaged by ice during the winter of 1872, and on June 23, 1874, Congress appropriated $2,000 for placing an enrockment of large stones around the station.

By the early 1900s, both the public and local politicians were demanding a new lighthouse at a nearby offshore site that could mark the entrance to both Lloyd and Huntington Harbors, and Congress provided $40,000 for its construction on March 4, 1907. After soundings and borings were made at the site and plans and specifications for the lighthouse were approved, a contract for its construction was awarded in the 1910 fiscal year.

The lighthouse, which remains standing today, was finished in 1912, and on June 16 of that year the torch was passed from the old lighthouse to the new one. The new lighthouse is a square tower attached to a one-story, cement structure, and its architectural style has been described variously as Venetian Renaissance, Art Deco, and Beaux Arts. The quarters at the lighthouse, consisting of a living room and bedroom, were intended only for the keeper while on watch, as the old lighthouse was retained as a shore station for the keeper.

The foundation of the new lighthouse consists of a concrete caisson, measuring twenty-six by thirty feet and having a height of sixteen feet, that was built ashore and then towed to the offshore site, where it was sunk in position by admitting water into its interior pockets. Riprap was placed around the base of the caisson for protection, and the interior pockets were then pumped dry and filled with concrete. A concrete pier was constructed atop the caisson that included a cellar that housed an oil room, coal room, and cistern. Also known as Huntington Harbor Lighthouse, the second Lloyd Harbor Lighthouse is the oldest reinforced concrete lighthouse on the East Coast, and the second oldest in the country, next to Point Arena Lighthouse in California.

Keeper McGlone would stand watch in the new lighthouse, while Augusta Harrigan continued to live at the old lighthouse. The two McGlone children who had not yet left home, Robert and Isabelle, spent most of their time at the new lighthouse helping their father, who by then was suffering from arthritis. Although Isabelle spent some free time digging clams and catching fish, her daily life was mostly filled with lighthouse-related work. Looking back on my life at the lighthouse, recalls Isabelle, I can truly say there was little pleasure. It seemed as though there was always work to be done and I was more than ready to tumble into bed as soon as the lamp was lit at sundown. I did miss the delights of childhood. Bleakness and drudgery is what I remember.

Isabelle was freed from lighthouse life in 1919, when her father passed away. Augusta continued to live at the old lighthouse, with a single-barrel shotgun to deter suspicious characters, until 1934. The old lighthouse was turned over to the state in 1924, and then to the town of Huntington in 1928. The dwelling, which went mostly unused in later years, was damaged by vandals and then destroyed on November 12, 1947, after a fire, started in the fireplace by some hunters, got out of control. Reverend E. J. Humeston, Huntingtons town historian, wrote, the fire had put a period to its long sentence to shameful and shameless neglect. Better the pyre than ignominious disuse. Augusta counted the fire as a blessing that provided the lighthouse a clean escape from neglect and its scurrilous maltreatment at the hands of tramps, campers, and filthy nobodies.

Several of the keepers of Huntington Harbor Lighthouse were recognized for rendering assistance to boaters. In 1920, Keeper Marvin Burnham rescued a man and woman from a leaking schooner in Huntington Bay. Emil J. Brunner served as keeper of the lighthouse for just a few months in 1929 and 1930, but during that time, he rescued the occupants of a speedboat that lost its wheel near the lighthouse and then rescued two men who fell overboard from a motorboat. Joseph Dubois, the lights next keeper, rescued a woman and child from an overturned boat on July 27, 1930 and took them to the lighthouse and supplied them with dry clothing.

The fourth-order Fresnel lens was transferred from the old tower to the new, and in 1947 an electric cable was laid to the lighthouse that allowed the station to be automated the following year. In 1967, the lens was removed from the lighthouse, and the Coast Guard announced plans to discontinue the light, but local protests caused the decision to be reversed. Over the next few years, a large crack appeared along the north wall, and by the mid-1980s, once again the lighthouse was going to be torn down. A non-profit group called Save Huntingtons Lighthouse was formed with the aim of restoring the station. The group received a thirty-year lease from the Coast Guard in 1985, and in 1988 the station was placed on the National Register of Historic Places.

In 2003, with the lighthouse safe and secure, the group changed its name to the Huntington Lighthouse Preservation Society. The group conducts tours of the lighthouse, which was the first offshore Long Island lighthouse to be regularly opened to the public. The station continues to be an active aid to navigation, with a modern 300mm lens as its beacon. The original fog bell, with its inscription Jersey City, NJ 1911, sits on the lantern deck next to the modern fog signal.

A Notice of Availability, dated July 2, 2010, announced that Huntington Harbor Lighthouse was excess to the needs of the United States Coast Guard and would be made available at no cost to eligible entities defined as Federal agencies, state and local agencies, non-profit corporations, educational agencies, or community development organizations for educational, park, recreational, cultural or historic preservation purposes. Qualifying organizations were given sixty days to submit a letter of interest.

In 2011, the Department of the Interior announced that Huntington Harbor Lighthouse would be transferred to the Huntington Lighthouse Preservation Society. This action was a fitting reward for the groups effort to save, restore, and interpret this unique lighthouse.

The society started a renovation of the foundation of the lighthouse in 2016, and two years and roughly $1.1 million later, the lighthouse was reopened to the public in July 2018. A combination of grants and fundraising paid for the project. More funds are now needed for new windows and repairs to the upper masonry.

For a larger map of Huntington Harbor (Lloyd Harbor) Lighthouse, click the lighthouse in the above map.

One block west of the intersection of Highways 25A and 110 in Huntington, turn north on Wall Street. After 0.6 miles turn left on Southdown Road. Follow Southdown Road to its end. Southdown Road will make two sharp right turns and a sharp left turn before you reach the end. Huntington Harbor Lighthouse is visible in the harbor from the end of the road.

Boat tours to the lighthouse are offered by Huntington Lighthouse Preservation Society, the non-profit group that is restoring the lighthouse. Tours run on select Sundays during the summer between 11 a.m. and 3 p.m.

The lighthouse is owned by Huntington Lighthouse Preservation Society. Dwelling/tower open during tours.