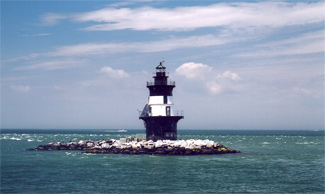 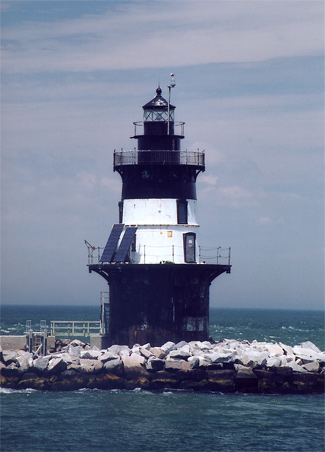 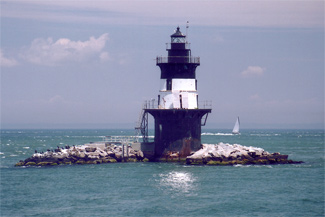 The deep and narrow gap between Orient Point and Plum Island is called Plum Gut, and at ebb tide, the waters of Long Island Sound rush through at currents exceeding five knots, creating a churning mix of white-capped waves and dangerous riptides that is a challenge for even the most experienced mariners. Oyster Pond Reef, a dangerous obstacle lying just beneath the surface of the water, extends from Orient Point one-third of the way across Plum Gut, making the passage even more treacherous. In 1855, the Lighthouse Service had a daymarker of the following description placed on a large boulder on the west side of the passage: A wrought-iron beacon had been designed for this locality, and the iron-work manufactured, under a previous superintendence, composed of a centre shaft seven inches in diameter, rising thirty feet above low water, surmounted with a basket-formed cage-work. Five iron posts, five inches diameter, being established regularly around it at the distance of three and a half feet, and rising to the level of high water, to the tops of which the centre shaft was to be braced by iron stayrods, one inch and three-quarters diameter, the heads of the former being connected by similar rods. All these posts intended to be sunk in the rock by drilling three to four feet.

The uncommon hardness of the rock and the derangement of the temporary staging, caused by a trading vessel running foul of it in the night delayed the completion of this beacon. A pyramidal stone beacon surmounted by a shaft and iron cage was placed on the reef in 1874, but this was carried away by ice in 1896. At first, plans were made to upgrade the daymarker with a simple light beacon and fog signal costing $5,000, but after considerable debate, it was decided to build a caisson tower composed of curved cast-iron plates, bolted together through flanges on the inside of the plates. On June 4, 1897, Congress provided $30,000 for the lighthouse, which was erected right on the reef, out at its far end, where it would be most beneficial to mariners.

Construction began in October 1898, but it turned out to be the stormiest autumn in decades. Forty-eight prefabricated steel plates making up the lower two courses of the foundation cylinder had been barged to the site, fastened together, and sunk when a strong gale broke twenty of the plates and damaged nineteen others. Construction was halted for the year, and the following spring the replacement plates were delivered. The bottom course was in place by June 6, and by the end of June, the bottom three courses were finished and cement was poured to within three feet of the top of the second course. The caisson foundation was completed by August, and most of the superstructure was in place by the end of September.

Orient Point Lighthouse exhibited its fixed red light for the first time on November 10, 1899, but its fifth-order lens proved to be too weak, and it was upgraded to a fourth-order lens on May 1, 1900. A blower siren, consisting of two, two-and-a-half-horsepower oil engines, a blower, a siren, and a trumpet, went into operation on June 1, 1900, and in 1905, the fog signal was upgraded to a second-class Daboll trumpet. The fog signal was blasting away about 400 hours each year.

Although 803 tons of riprap had initially been placed around the foundation to protect the structure, prolonged exposure to powerful ice floes and winter storms created constant problems. Over the next three years, more than 9,000 additional tons of riprap at a cost of $1.50 per ton were used at the base of the structure to build a protective breakwall. This work, which sits on the reef and protects the lighthouse, is twenty-five feet wide at its base and thirty-two feet tall. The lighthouse tower itself is forty-five feet tall, with six interior decks. A few years after the lighthouse was built, some cracks and rust were found on one side of the foundation. After more plates were added to patch the problems, the extra weight caused the lighthouse to tilt about five degrees. (Some accounts blame the tilt on currents undermining the foundation on that side.)

The basic, no-frills style of this and similar lighthouses of its time was a reaction to the expensive and high-maintenance but architecturally fascinating lighthouses previously built in the region. Not one of the most attractive lighthouses ever built, the solid brown structure was nicknamed The Coffee Pot by local mariners. Orient Point Lighthouse is similar in design to a number of other Coffee Pot lighthouses built around this time. Starting in the early twentieth century, after automobiles became a common sight, these towers became more widely known as spark plug lighthouses.

The first head keeper at Orient Point was a Norwegian immigrant named Ole Nicholas Alfred Anderson. Since the stations location in open water was considered too dangerous for a keepers family, Andersons wife was forced to live in the nearby town of Orient, on Long Island. In November 1900, Terence Riordan, Andersons assistant, took the stations boat and rowed ashore, promising that he would return in time to relieve Anderson so he could go to town to vote. For ten days, Anderson was alone in the lighthouse, and according to a newspaper account, he barely got more than a couple hours of sleep each day as he tried to keep the station running. When his provisions started to run low, Anderson reportedly set the stations flag flying upside down and even altered the lights signature at night to attract attention to his predicament, but it wasnt until a man strolling along the beach spotted the inverted insignia that help was sent out to the lighthouse. While this account made for some good reading, the truth is that Anderson had an ample supply of canned goods at the lighthouse and could have survived for weeks. A man on the beach did rescue Anderson, but it was only because he noticed that the stations rowboat had been ashore for an unusual length of time and decided to row out to the lighthouse to satisfy his curiosity.

Keeper Anderson served at Orient Point until September 1901, when he was transferred to Bridgeport, Connecticut. Later, Anderson would serve twenty-five years at the twin lights at Navesink, New Jersey. When Andersons son Olaf sailed into New York Harbor from France aboard a troopship at the end of the First World War, he could see the light from his fathers lighthouse welcoming him back to America.

On August 30, 1912, the steamer Halyoake was passing through Plum Gut when its steering suddenly went out. The strong currents turned the ship, and with its engines still in gear, it headed straight for Orient Point Lighthouse. The ships captain ordered the engines to full reverse, while at the lighthouse Keeper Charles Whitford watched and anxiously braced himself for the inevitable impact. Fortunately, the captain had acted just in time. Whitford wrote that the bow ran up on the rocks surrounding the station, but the steamer backed off immediately, and no damage was done to either the steamer or the station.

In May 1924, Assistant Keeper John Wallwork left the lighthouse to go ashore for mail and groceries. While on the mainland, Wallwork met Walter Gill, who had been sent to repair an engine at the lighthouse. The two men set off for the lighthouse in a rowboat, but soon found themselves in trouble. Keeper Manuel Freitas had been watching their progress with glasses from atop the tower, and when he saw that their boat had become unmanageable, he launched another rowboat. Before Freitas could reach the other craft, it had overturned and sank, spilling the two men and their cargo into the churning waters. Freitas frantically tried to rescue the men, but his efforts were futile. All Keeper Freitas could do was notify the Coast Guard so a search could be made for their bodies.

On February 11, 1936, First Assistant Keeper Marvin Andrews took the stations fourteen-foot motorboat to the dock at Orient Park, a mile-and-a-half from the lighthouse, and turned the boat over to Second Assistant Keeper John Duff, who was returning to the lighthouse from his monthly six-day furlough. Duff started out to the lighthouse, but 300 feet from the dock, the motor failed, and the boat started to drift into the sound with the tide. Head Keeper Bratland watched his assistant tinker with the motor from the lighthouse using field glasses, and when Duff took out an oar to pole the boat, Bratland notified the Coast Guard at New London that his assistant needed help. Trapped in a field of ice, Duff exited his boat, wrapped himself in a canvas motor cover and tramped about and swung his arms to try to keep warm. Five-and-a-half hours after having left the dock, Duff was finally rescued by the Coast Guards icebreaker 171, after attempts to reach him with surfboats from Long Island failed.

On April 5, 1958, the Coast Guard Cutter Hawthorne arrived at Orient Point Lighthouse and carried away the stations furniture and personnel. The Coast Guard keepers were replaced by the click of micro-switches and solenoid valves. In 1970, the Coast Guard announced plans to tear down the automated lighthouse, which they deemed unsafe for servicing personnel and too expensive to repair, and replace it with a reinforced pipe tower. A citizens campaign was soon organized to save their beloved Coffee Pot, and the Coast Guard backed down. Chesterfield Associates was hired to pump concrete into the base, sandblast the tower, and cover it with a new coat of paint and an epoxy preservative. When the work was over, the tower was restored to its former respectable appearance.

The Fresnel lens was replaced by a modern optic in 1988, and in 2000 the Coast Guard returned for major work on the lighthouse. The towers emergency generator and equipment for filtering, pumping, and storing the associated fuel were removed, and solar panels and batteries were installed to eliminate the lights dependency on a submarine power cable. The lighthouse is now a less hazardous place and easier to access as well thanks to the installation of a new boat ramp. The tower was given its current daymark of black with a white band in the late 1980s.

In June 2011, Orient Point Lighthouse was declared excess to the needs of the United States Coast Guard and made available to eligible organizations under the provisions of the National Historic Lighthouse Preservation Act of 2000. Qualified entities were given sixty days to submit a letter of interest and were required to obtain an agreement from the State of New York to occupy the submerged lands on which the lighthouse stands. After no suitable caretaker was found, an online auction for the lighthouse opened on June 1, 2012. Nine bidders participated in the auction, which ended on September 25, 2012 with a high bid of $120,000. The winning bidder provided the additional deposit required within forty-eight hours of the end of the auction but failed to close on the lighthouse within the sixty-day closing period. As a result, another auction for the lighthouse was initiated on June 10, 2013. Seven bidders participated in the second auction, which ended on September 18, 2013 with a high bid of $252,000. The winner of the lighthouse has been identified as Randy Polumbo, an artist and owner of Plant, a New York City construction company.

Located roughly a half-mile offshore from Orient Point, on the western side of Plum Gut, the mile-wide waterway that separates Plum Island and Orient Point.
Latitude: 41.1635, Longitude: -72.22361

For a larger map of Orient Point Lighthouse, click the lighthouse in the above map.