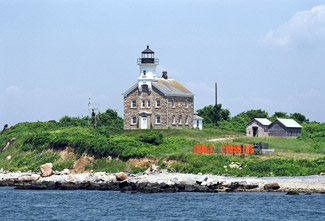 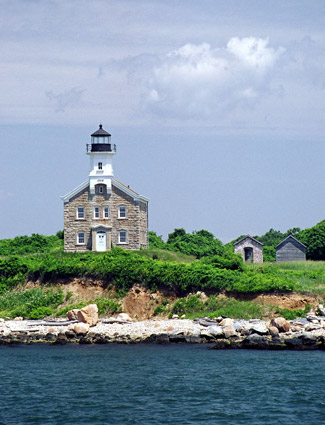 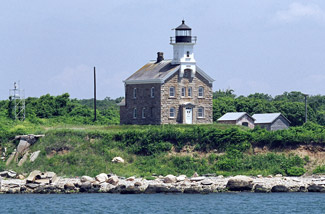 Plum Island is the largest of three islands that extend northeasterly from the North Fork of Long Island into Long Island Sound. The geography of this area was created by a moraine that was pushed up when glaciers last covered the area, around 15,000 years ago. The earliest record of a European settler on the island dates from 1659, when one Samuel Wyllys bought Plum Island from Wyandanch, the senior chief of the four Indian tribes that controlled most of Long Island at the time. The recorded purchase price was one coat, one barrel of biscuits and 100 fish-hooks. There was considerable friction between the white settlers and the natives over land transactions such as this, due to cultural differences. The Indians believed that land belonged to everybody, and it was not theirs to sell  in their view they were selling access rights for fishing and hunting to the Europeans. Further complications arose from arguments between Wyandanch and the chiefs of the three other Long Island tribes (all of whom were his brothers) over who had the right to sell Plum Island in the first place.

Things got even more complicated when the Town of Southold also bought Plum Island in 1665 from one of Wyandanchs brothers. The town deeded shares of the island to each of its freemen, but in a curious twist, most of these men suddenly turned their shares over to a Captain John Youngs a mere two months later. There are many records of Captain Youngs buying and selling land throughout the area during the next several years, but no record of any further transactions involving Plum Island. The record grows murky at this point, but it apparently resolved itself in favor of Wyllys, most likely due to the death of Wyandanchs three brothers, leaving him the undisputed chief of Long Island.

Plum Island was the site of the first battle between British and colonial troops during the Revolutionary War. Under orders from George Washington, General David Wooster and his troops went ashore near the present site of the lighthouse in 1775 with the goal of preventing livestock raids by the British. The British troops garrisoned on the island fired on them, and the colonial troops were forced to retreat across the water back to Oyster Ponds (known today as Orient Point).

Plum Island Lighthouse stands on three-acres at the west end of Plum Island, which were purchased from Richard Jerome for $90 in 1826, and marks the east side of Plum Gut, a mile-wide entrance to Long Island Sound with extremely strong tidal currents. Orient Point lies on the opposite side of Plum Gut. The first lighthouse on Plum Island was a thirty-five-foot, octagonal tower built of rough stone in 1827, using a $4,000 appropriation granted by Congress on May 18, 1826. Ten lamps with reflectors, divided into two groups of five and arranged on rotating copper tables, served as the towers lighting apparatus, and an eight-room dwelling was provided for the keeper. In 1856, a fourth-order Fresnel lens that produced a white flash every thirty seconds replaced the array of lamps and reflectors.

After visiting the island during the summer of 1850 when Sineus M. Conkling was in charge of the light, an inspector issued the following report:

Dwelling-house is in fair order. Tower of the light-house is leaky  always was, I suppose, and always will be. Lantern is in a miserable condition, it being very rusty indeed; sashes large, glass small; lantern apparatus is poor; lantern deck is of rough, unhammered granite; lighting apparatus and lantern not clean. Keeper was formerly a good one, and probably will do better with a new lantern and lighting apparatus; he promised that he would do better, and wished me to make as favorable a report of him as I could. I told him I would. He is a small consumer of oil.

The Annual Report of the Lighthouse Board for 1868 records, Both the tower and keepers dwelling are in bad condition and should be rebuilt. The tower, built in 1827, leaks badly; the masonry is soft and crumbling; the lantern is of the old pattern and with small lights and large astragals, and it leaks badly. It is thought that the old buildings are not worth the money which would be required to put them in good order, and it is therefore proposed to rebuild them.

Funds were allocated for a replacement on March 3, 1869, and it went into operation in 1870 using the Fresnel lens from its predecessor. The new lighthouse consisted of a granite, two-story dwelling, with a white cast-iron tower, capped by a black lantern room, attached to the front of the dwellings pitched roof. A fog bell, mounted in a wooden tower and tolled by a Stevens striking apparatus, went into operation with the new light. The previous keepers dwelling remained standing until 1885.

The lighthouses slate roof, which leaked badly, was replaced in 1878 with a shingle roof, and the fog bell was raised about ten feet higher on the bell frame that same year so it could be better heard.

William W. Wetmore was head keeper when the current lighthouse was built and was apparently a noted angler. John Jacob Astor, who would later be the wealthiest person to perish aboard the Titanic, called at Plum Island and was outfitted with bait and lines by Wetmore. Three years later, President Grover Cleveland stopped at the island to get Wetmores pointers on catching bluefish. Keeper Wetmore was eighty-five and reportedly the oldest keeper in the country when he passed away in 1892. William Jr., who had been serving as his fathers assistant, took charge of the light and remained on the island until 1903. In October 1900, Keeper Wetmores granddaughter Blanche found a box of matches and while playing with them accidentally set her clothes on fire. Blanches sister screamed for help, and when her father reached them, Blanche was enveloped in flames standing on the stairs with a death grip on the handrail. Leaving her in the care of her mother, Blanches father rowed over to Orient Point and returned with Dr. Nugent, who did everything he could but was unable to save the child.

Since the locations that required lighthouses also often had strategic military significance, a number of light stations found themselves with military bases as neighbors. Such was the case at Plum Island, and a tradition developed that allowed lighthouse keepers to purchase food and supplies from the base commissaries to save them a longer trip to a more populated area. William Chapel became keeper at Plum Island in 1913 and was accustomed to buying his provisions at Fort Terry, located just east of the lighthouse, however, in 1916 Chapel was informed that he no longer had privileges at the military base. This injunction forced him to take his small boat two miles over to Orient Point, or sometimes all the way to New London, twelve miles across Long Island Sound. Other lighthouse keepers were similarly affected by the new rule, and the Lighthouse Board had to intervene on a case-by-case basis. Eventually, Chapel and most other keepers regained their access to the bases.

In 1917, Keeper Chapel rescued the captain of the tug S.L. Hommedieu and his wife from an open boat without oars, after the couple was forced to flee the sinking tug. Seven years later, Captain Sidney Smith and his two sons were returning from a trip to Montauk aboard their high-powered motorboat, when an explosion caused the vessel to sink. The cabin windows were closed as it was raining at the time, and when one of the sons struck a match to light a cigarette, the flame ignited gas fumes from the engine causing the explosion. The body of Harry, a thirty-year-old son, washed ashore on Plum Island, and Keeper Chapel rescued twenty-five-year-old Sidney, Jr., after he had been in the water for three-and-a-half hours. Six days later, the body of Captain Smith washed ashore on Block Island, forty miles from where the boat sank.

Soon after the attack on Pearl Harbor in December 1941, many lighthouse personnel became part of the war effort as lookouts were established at many stations. A lookout tower was mounted atop the lantern room at Plum Island Lighthouse for part of World War II.

Tony Tuliano spent most of 1977 on Plum Island as part of a four-man crew responsible for the lighthouse. Though the light was electrified at the time, the men still had to turn it on and off each day, and surprisingly, they had to wind up a one-hundred-pound weight that caused the Fresnel lens to rotate and produce a periodic white flash. When visibility was reduced, the men activated the fog signal on Orient Point Lighthouse and the siren located in the generator house on Plum Island.

Fort Terry had little value following World War II, and the Army turned the property over to the U.S. Department of Agriculture, which now operates the Plum Island Animal Disease Center on the island. Coast Guard personnel were removed from Plum Island in 1978, and the lighthouse was replaced by a flashing white light mounted on a fourteen-foot-tall brick shed. The granite lighthouse was not maintained after its closure and soon fell into disrepair.

In 1994, the Fresnel lens and its clockwork mechanism were taken out of the tower and put on display at the East End Seaport Museum in Greenport.

Erosion of the bank in front of the station caused a generator house to fall into the water in 1997, and not long thereafter the lighthouse itself was at risk. In 2000, East End Lighthouses was formed to spearhead the restoration and reactivation of Plum Island Lighthouse. The group arranged for 15,000 tons of rocks to be brought to the island for the purpose of shoring up the bank and stopping further erosion. Now part of East End Seaport Museum & Marine Foundation, East End Lighthouses is working with the Department of Homeland Security, which now controls Plum Island, to restore the venerable lighthouse. As the island is off limits to the public, the lighthouse can only be seen from the water.

For a larger map of Plum Island Lighthouse, click the lighthouse in the above map.

Plum Island is home to the USDA Animal Disease Center. That should be enough to keep anyone from landing on the island, but I think access to the island is also restricted. Hence, the lighthouse is best seen by boat. Views of the light are possible from the Cross Sound Ferry, which operates between Orient Point, NY and New London, CT. Also, East End Seaport and Cross Sound Ferry offer excursions that pass by the light.

The lighthouse is owned by the Department of Homeland Security. Grounds/dwelling/tower closed.