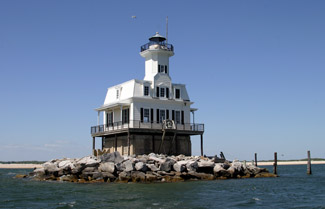 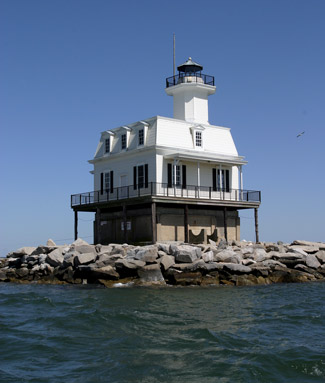 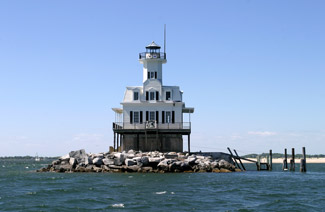 In December 1869, the New York Herald carried the following plea for a lighthouse on Long Beach Bar to mark the entrance to Peconic Bay for the fishermen of eastern Long Island: The one great desideratum which the people of this part of the island most anxiously look for to the general government is the erection of a lighthouse on Long Beach bar  the only difficult or dangerous place the fishermen have to pass on their trips up and down the bay. A light, casting its friendly radiance across the waters at this point in years past, might have been the means of saving many a gallant little craft and kept the black shadow of desolation from many a home.

Congress provided $17,000 on July 15, 1870 to construct Long Beach Bar Lighthouse, and its beacon was first lit on December 1, 1871. William Thompson was placed in charge of the new light, and his first entry in the station logbook read, Only 70 gallons of oil on hand when I came. Thompson resigned the following April, after having spent a harrowing winter at the lighthouse. On one occasion, Thompson and his assistant abandoned the station for two nights for fear that ice fields were going to destroy the structure. In June 1872, Congress allocated $20,000 for a breakwater to protect the lighthouse from future ice floes.

Perched on a screwpile platform penetrating ten feet into the sandy bottom of Gardiners Bay, Long Beach Bar Lighthouse resembled a bug walking on the water when viewed from a distance, and it became known locally as the Bug Light. The two-story, wood-frame keepers dwelling was topped by a mansard roof and a four-sided tower featuring beveled edges. A fifth-order Fresnel lens mounted in the towers lantern room displayed a fixed red light at a height of fifty-four feet above the bay. To assist mariners during periods of limited visibility, the station also had a fog bell that was struck by machinery once every fifteen seconds. The keepers dwelling had a kitchen, dining room, and sitting room on the first floor and three bedrooms and an oil room on the second floor.

Though the breakwater did afford some protection, the station was frequently damaged by ice piling up against the thin, spindly legs of the foundation. In 1881, Keeper George W. Fenton described how the lighthouse had nearly been destroyed in a storm: Ice packed under the house from the east with flood tide, and broke three pilings, and nearly all of the braces. The ice was two feet thick. Had to steady the lamp lenses by hand to save them. A reinforced concrete foundation was poured beneath the lighthouse in 1926 to provide better protection. The top portion of the cement foundation held a central steam heating system for the lighthouse, and a new bathroom with a flushing toilet was also added to the lighthouse at the same time.

Keepers did not always perform their duties to the best of their abilities. Judging from entries in the stations logbook, Keeper Fenton spent most of his time catching lobster and blackfish, and complaining when storms washed his lobster pots away. On August 3, 1911, the steamer Shinnecock came up Long Island Sound toward Peconic Bay. Upon entering a heavy fog bank, the ships captain headed toward Plum Island Lighthouse, and when he heard that stations fog signal, turned toward Long Beach Bar Light. He proceeded cautiously, listening for Long Beach Bars fog bell, until he ran aground right in front of the station. Almost a half hour later, the keeper finally started the fog bell and let it ring long after the fog had lifted. The ship and its passengers were not injured, but the keeper was severely reprimanded for his inattention.

Charles Fenton, who was an accomplished player of the flute, violin, and accordion, became keeper of Long Beach Bar Lighthouse on May 18, 1887, following the passing of his father George. Two years later, a new assistant keeper, Charles B. Moore, arrived at the station with his daughter Ruth. Ruth and Keeper Fenton had plenty of time to get acquainted at the isolated lighthouse and soon decided to wed. The couple went ashore for the wedding ceremony but returned to their beloved lighthouse for their honeymoon. Charles Fenton resigned as keeper in 1905, when a doctor forbade Ruth from living at the station any longer due to her poor health.

The station was taken out of commission in 1948, mainly because the sandbar had extended so far beyond where the lighthouse stood that the beacon was useless as a channel marker. In 1955, the lighthouse was put up for auction, and a local group called the Orient Point Marine Historical Association placed the winning bid of $1,710, quite a bit more than the other bids that ranged from $52 to $212. On the Fourth of July in 1963, the lighthouse was lit up again, when arsonists set fire to the structure, completely destroying it.

A fundraising campaign launched by the East End Seaport Museum and Marine Foundation under the leadership of Merlon E. Wiggin managed to raise $140,000 for the construction of a working replica of the original lighthouse. Work on the new lighthouse began at the Greenport Yacht and Shipbuilding Company in the summer of 1990, based on old drawings, and on September 5, 1990, the lighthouse was ready to be moved to the old concrete foundation. The structure was put on a marine railway and taken to the dock, accompanied by much ceremony, including a Navy band and a twenty-one-gun salute. At dockside, it was separated into three sections and loaded onto barges, which were towed to the site. By the end of the day, the sections of the lighthouse had been lifted into place by a giant crane, and the towers solar-powered beacon was lit as a private aid to navigation to the accompaniment of a special fireworks display.

There is a story about a local fisherman who sailed by the lighthouses empty foundation one morning, and when he returned that evening and saw a complete, working lighthouse, he doubted his vision and his sanity. The entire project took just sixty days, and the erection of the tower on the foundation just one.

In 1993, due to support from the community and local mariners, the Coast Guard recognized the beacon as a federal aid to navigation. The lighthouse is visible alongside Highway 25, between East Marion and Orient, where you will also see a marker listing all those who contributed to the second Bug Light.

The future of the lighthouse is still far from certain. The structure sits on 130-year-old screwpiles that remain underneath the concrete foundation, and the riprap surrounding the foundation is sinking and needs to be replenished. East End Lighthouses and the East End Seaport Museum feuded over control of the lighthouse for a few years, but in April 2005, an agreement was signed between the two groups to divide maintenance and repair chores and to jointly cooperate in fundraising to keep the lighthouse functioning as an active aid to navigation. The two groups have since combined, and today East End Seaport Museum & Marine Foundation cares for and interprets the lighthouse.

For a larger map of Long Beach Bar Lighthouse, click the lighthouse in the above map.

This lighthouse is best seen by boat, but views are possible from


A more recent addition to the waterfront of the area is a large iron sculpture of an osprey. The metal bird sits atop a twisted I-beam, pulled from the wreckage of New York's Twin Towers.