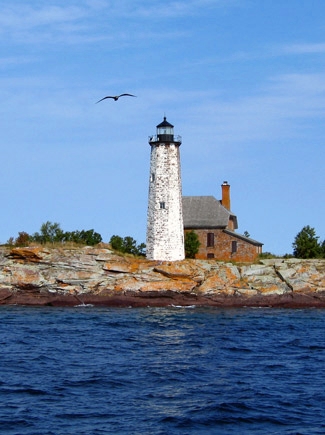 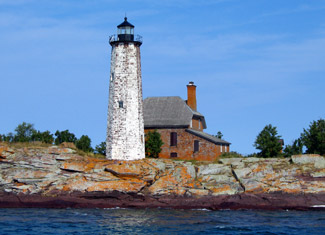 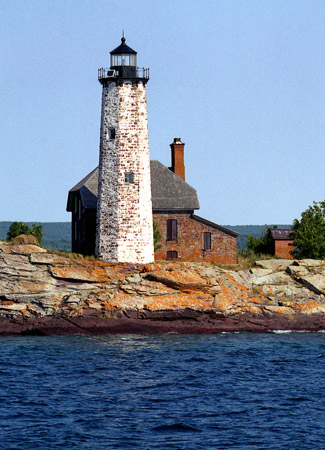 Located in the northwest corner of Lake Superior and measuring forty-five miles long and nine miles wide, Isle Royale is the largest island in Lake Superior, the second largest in the Great Lakes, and the third largest in the lower forty-eight states. Remote Isle Royale and 450 smaller islands that surround it became Isle Royale National Park in 1940, guaranteeing that no more attempts at profiting from its natural resources will be made. Isle Royale is scarred by ancient mine pits and trenches that indicate copper mining was carried out on the island by Native Americans long before the copper boom in Michigans Upper Peninsula occurred in the mid-1840s. Rock Harbor Lighthouse was built near the eastern tip of Isle Royale in 1855 to aid the vessel traffic associated with the mining, but it was only active from 1856 to 1859 and again from 1874 to 1879, two periods of heightened mining activity on the island.

During the revival of copping mining on Isle Royale that started in 1873, Island Mine was opened about two miles northwest of the head of Siskiwit Bay, situated on the southwest shore of Isle Royal, and mining interests called for a lighthouse to help mark the way to the lengthy pier located in the bay. Isle Royale became its own county in 1875 with a town on Siskiwit Bay serving as the county seat, but Isle Royale County was reincorporated into Keweenaw County in 1897, after mining operations on the island ceased.

On March 3, 1873, Congress appropriated $20,000 for a lighthouse on Isle Royale, but construction of the lighthouse was delayed until the opening of navigation in 1875 due to debates on where exactly the light should be located. Menagerie Island, the most easterly of a string of small, rocky islands that help form Siskiwit Bay, was finally selected as the site for the lighthouse, and native red sandstone was used to construct an impressive octagonal tower, linked to a two-story, stone keepers dwelling by an eight-and-a-half-foot-long covered passageway.

The sixty-one-foot-tall tower was built with double walls and contains a cast-iron spiral stairway that winds up to its lantern room, where a fourth-order Henry-Lepaute Fresnel lens beamed forth a fixed white light at a focal plane of seventy-five feet. The light was placed in operation on September 20, 1875, with William Stevens as its first head keeper and his wife Mary Ann as the first assistant keeper. To create a more distinctive daymark, the sandstone tower was whitewashed.

During their time at Menagerie Island, Keeper John H. Malone and Julia had a dozen children, one of whom died at birth. The names of the eleven surviving children, from oldest to youngest, are: John, Charles, Belle, Edward, Frank, Hester, Sterling, Carlos, Folger, Reed, and Dora. Some sources erroneously claim that the island was named for the Malones menagerie of children, but the island was known as Menagerie Island long before the arrival of Keeper Malone. Another repeated story claims that the male Malone children were named after lighthouse inspectors, but the inspectors serving the eleventh district during the Malones time on Menagerie Island were John, Horace, Oscar, and William.

The Malones would typically arrive at the lighthouse around the first week of May and leave for the winter in December, seven months later. Keeper Malones logbook entries provide a snapshot into the weather and life at the station. On October 16, 1880, he wrote: Hail, snow and rain  a tempest; Lost boat, boat house ways, and dock. It was impossible to save anything. I dont believe a cat could get from the dwelling to the boat house. It hailed awful. In 1884, severe weather prevented Keeper Malones family from joining him on the island until late July, and by November 10, winter weather was already threatening their departure from the island: It is almost impossible for us to stay here much longer for we have to cut the ice from the way every day or we could not launch our boat, the only hope we have of getting off for winter quarters. The next spring, Malone made the following entry in the stations log on May 11: Arrived here at 12 oclock and commenced lighting up. We had to keep three stoves going night and day steady to heat up the house. It was just like an ice house. The lake is full of ice and the weather is very cold. On November 4, 1885, Keeper Malone noted: This must be the North Pole.

To supplement the rations delivered by the lighthouse tender, Keeper Malone and his assistants caught lake and brook trout, shot ducks, rabbits, and prairie chickens, and picked berries. One of the most important staples the family was able to gather was seagull eggs. In May 1886, the islands residents collected over a thousand eggs during the nesting season, and then ate about thirty eggs a day through the first part of July. The bounty the following year was 1,478 eggs by the first of June.

On November 5, 1885, the 262-foot-long steamer Algoma left Owen Sound on Georgian Bay bound for Thunder Bay at the western end of Lake Superior. Though the ship could accommodate over 700 passengers, there were only thirteen on board due to the lateness of the season. During the afternoon of November 6, the Algoma encountered a blinding snowstorm halfway across Lake Superior, and at 4:40 a.m. the following morning, it ran aground on Mott Island, near the eastern end of Isle Royale. Less than two hours later, the ship broke in two. Many of those aboard were swept away, but three people made it to shore and eleven remained in the grounded portion of the ship until the storm abated. Forty-six people perished in the disaster, and the fourteen survivors, including two passengers, eleven crewmen and the captain, were picked up by the Athabasca on November 9.

Keeper Malone noted the wreck of the Algoma in the stations log before closing up the lighthouse for the 1885 season, and after returning to the station the next spring, he recorded the following on June 28, 1886: We found 4 life preservers on the beach abreast our station belonging to the ill-fated steamer Algoma. They are damaged from washing along the island. Also found a couple of small pieces of a piano  some wire mattras [sic] frames and one pillow.

In 1905, concrete blocks made at the lighthouse depot in Detroit were delivered to the island to construct an oil house with a capacity of 500 gallons.

After thirty-two years on Menagerie Island, Keeper Malone accepted a transfer to Pipe Island Lighthouse on St. Marys River, and John A. Malone, his eldest son who had been serving as assistant keeper for a decade, took charge of Isle Royale Lighthouse. John A. Malone left after just two years as head keeper and was replaced by Klaas Hamringa. Peter Malone, father of John H. Malone and grandfather of John A. Malone, was the first keeper of Portage Lake Ship Canal Lighthouse, serving from 1874 until John H. Malone took charge of the light in 1877. Three generations of Malones thus served mariners on Lake Superior for nearly forty-five years.

On May 29, 1914, the Lighthouse Service automated isolated Isle Royale Lighthouse through the installation of an acetylene light that produced a white flash every five seconds, bringing to an end the era of keepers on Menagerie Island.

In October 1928, duplicate lighting equipment was installed at Isle Royale Lighthouse to provide the utmost safeguard against outage. Some time prior to this, the light had gone out, and the keeper at Grand Marais Lighthouse in Minnesota had to take a commercial steamer out to the island to reactivate the light. The main acetylene light was a one-and-a-quarter-foot burner placed inside the Fresnel lens, while the duplicate light was mounted outside on the lantern deck. The two lights flashed in unison and were fed by six 180-cubic-foot compressed acetylene tanks located in the base of the tower. A small shelter was also placed outside the base of the tower to house two additional spare tanks, which were automatically engaged when the main gas supply was exhausted.

A battery-powered lighting system replaced the acetylene equipment in 1941, and in 1993, a solar-powered light was installed atop the lighthouse.

For a larger map of Isle Royale (Menagerie Island) Lighthouse, click the lighthouse in the above map.